Put a Spell on You

Even if you have never been a fan of Charmed, Buffy or Penny Dreadful you are going to be mad about Witch Pickings by Nextgen. It’s a fun and entertaining slot with captivating gameplay. Its vibrant colors are perfect. Animation of the reels is smooth and flawless. The background looks like a cartoon setting, not like a plainly utilitarian game background. As for the Witches, they are juicy as heck.

The overall concept of the game is rather straightforward. Witch Pickings has the standard set of 5 reels and the 25 lines that are fixed. The main goal is to line-up identical tiles on the line or several lines. All combinations of tiles start from the 1st reel on the left. Each combination has to comprise at least three tiles of one kind.

Standard tiles are partially taken from cards. Those are the 9s and the 10s, worth 100x for the five. Then there are Jacks and Queens. They are paid the same for the combo of five. Aces and Kings are worth 200x for five. Apart from the card tiles there are four unique icons, designed to fit the gameplay. 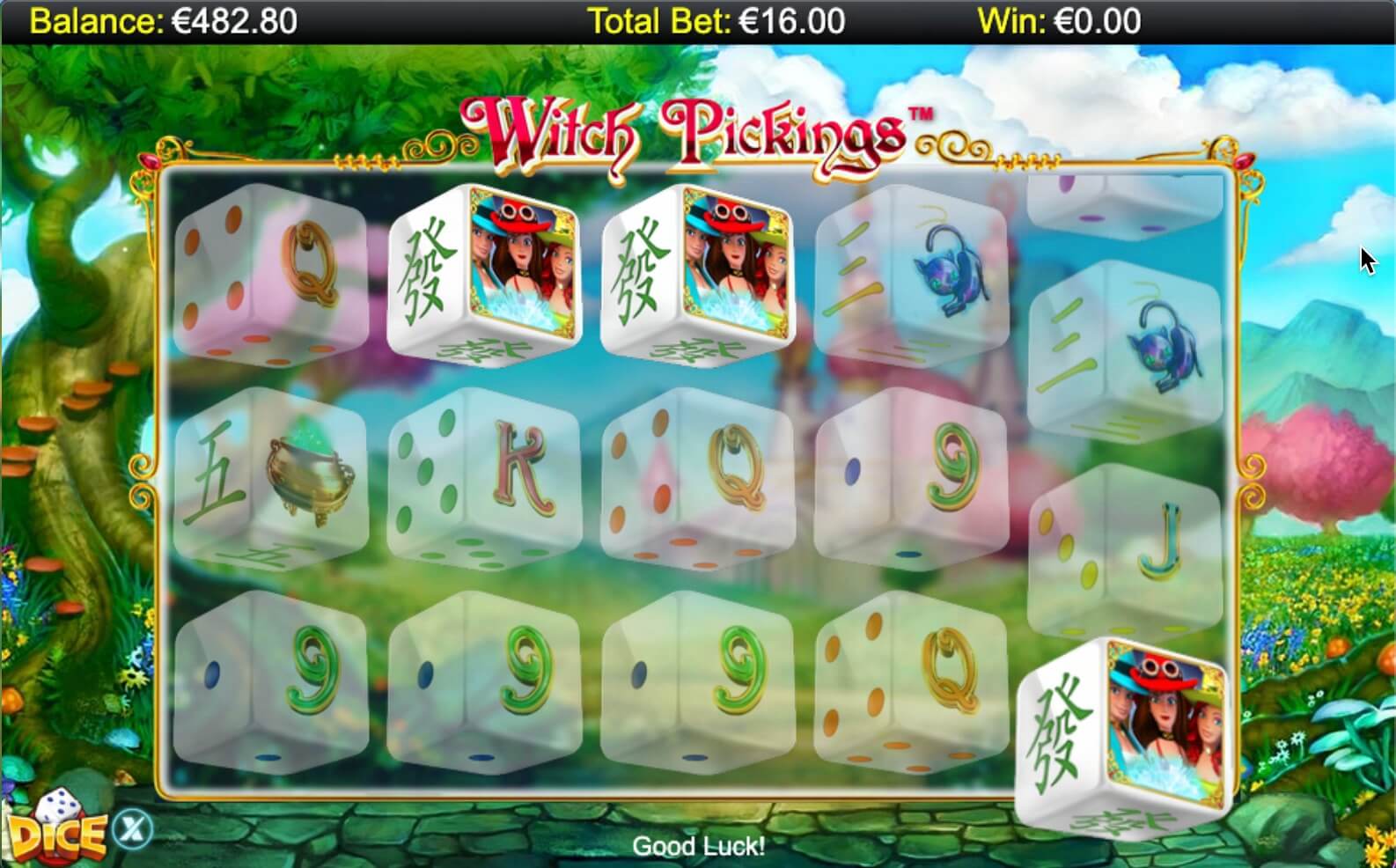 If the regular gameplay is pretty much standard, the bonus features are nothing like you have ever experienced before. Let’s start with a Crystal Ball or the Wild. First and foremost, it is a replacement tile. It is made to replace a missing icon in a combination. But there is more to it. 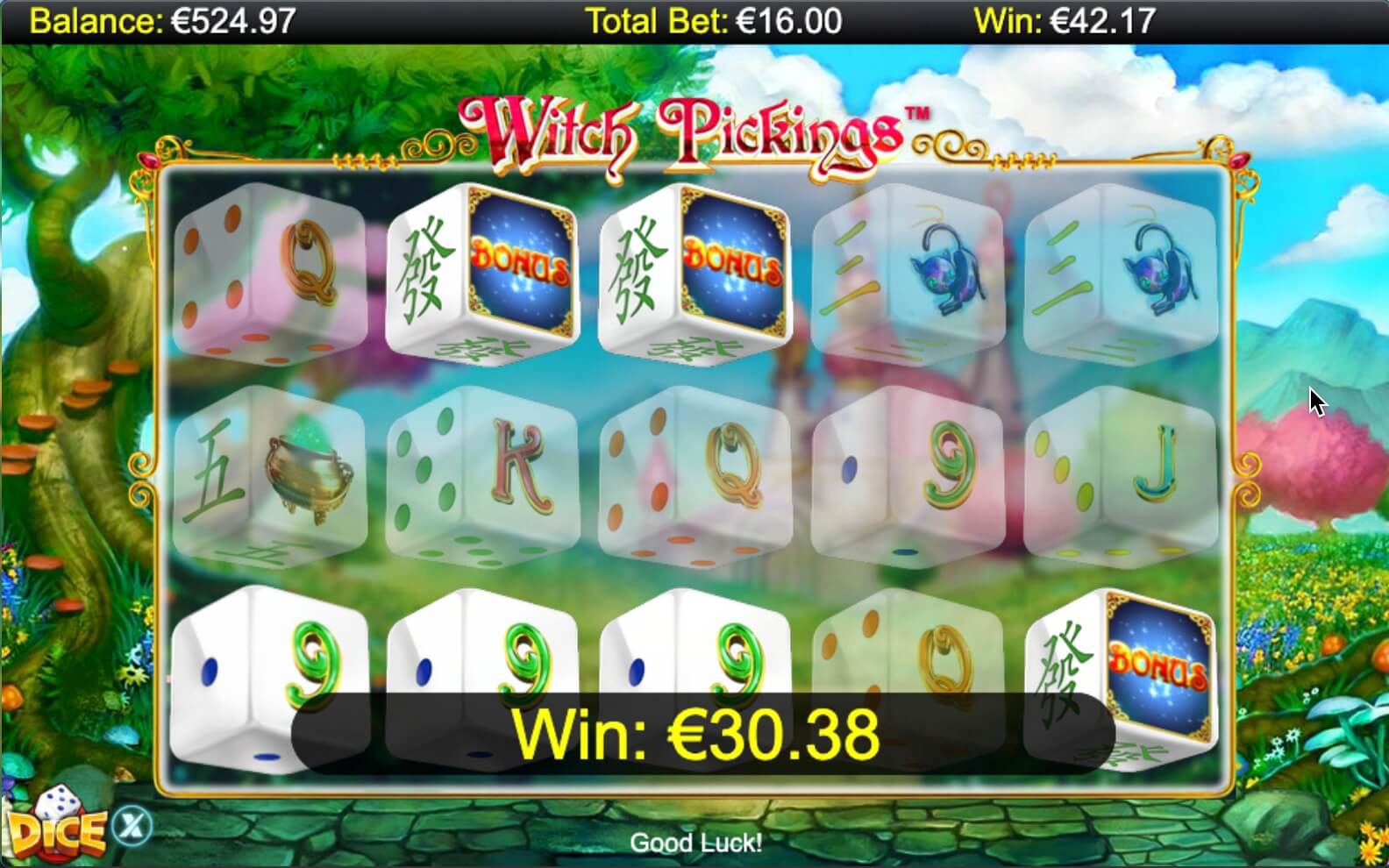 The Wild may also act as a regular paytile. The combination of five of a kind will be paid 1,000x, while the smallest combo of the wilds is just two of one kind but it’s rather cheap: only 20x the bet.

One more icon you need to know well is the Scatter tile. It features the three witches themselves. They are hot, so you better keep it together. The Scatters may also act as a paysymbol. The combination of five of a kind will be paid 625x. But their main function is to initiate bonus features. You need at least three of those anywhere on the reels for the bonus round to begin. 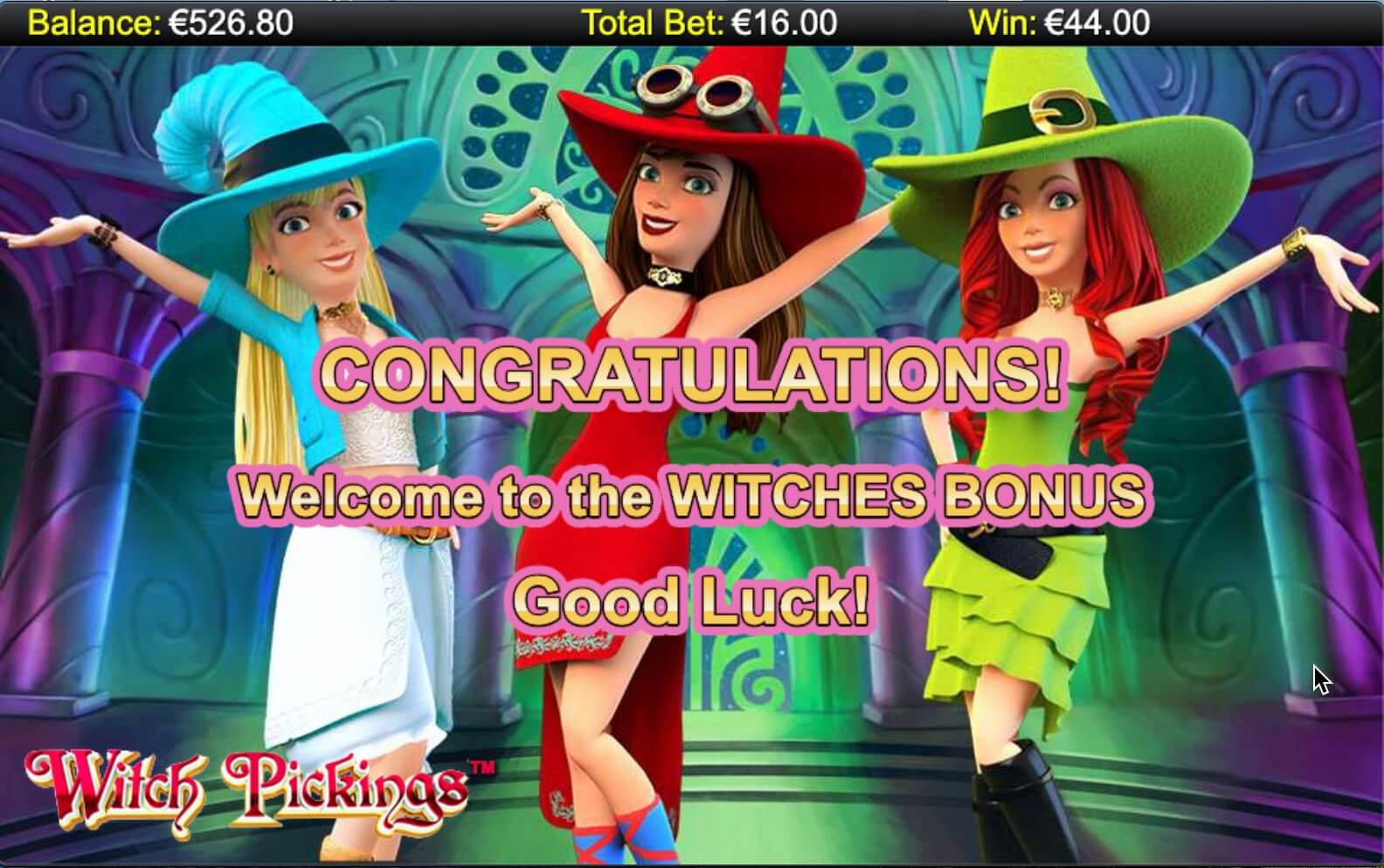 Witches Pickings’ bonus feature is much more complicated than any other usual bonus game. The bonus reward is simple: five free spins for a triggered bonus game. But they come with extra perks from each of the 3 witches. You have to pick them before the round starts.

The Blue Witch controls the unique tiles of the slot: the cauldron, the potion bottle, the black cat and the castle. For instance, she can replace them all with one tile only. Before the round starts, one of those four tiles is selected. It replaces the other three tiles during the spin. Another bonus option is a stalked symbol. Once again one tile is selected out of the available four, and it becomes stalked. 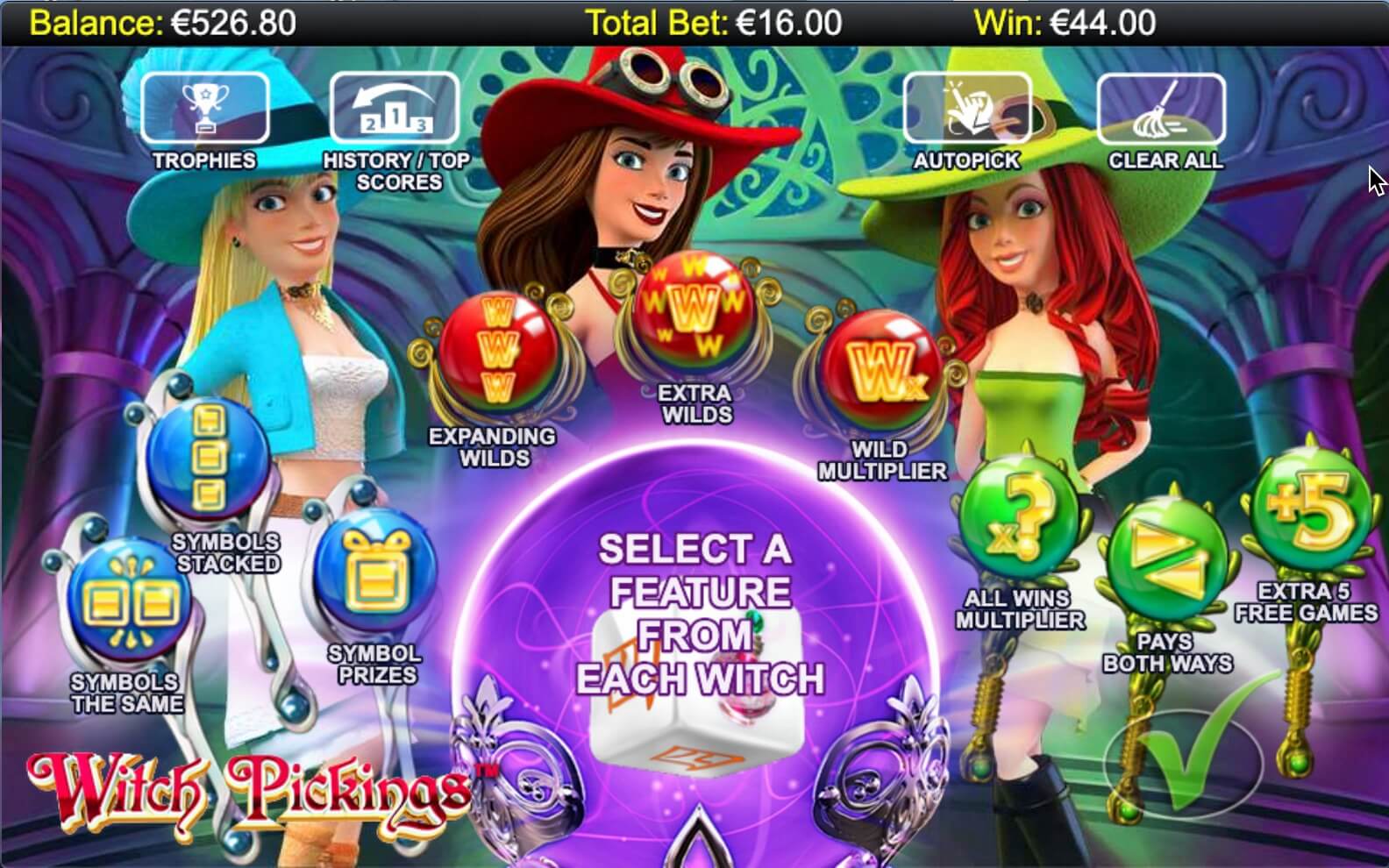 The third and the final option is an extra price for a tile. One out of the four aforementioned icons is selected, and then a prize is assigned to it. It may be anywhere from 25 to 500 credits. Once hit, the prize value is multiplied by the bet value.

The Red Witch offers three unique options of her own. Her superpower is the control over the Wilds of the slot. One possibility is that they become expandable. Also, some more wilds can be added to the reels. And finally, every win with a wild may come with a multiplier: x2, x3, x4, x5 or x10. 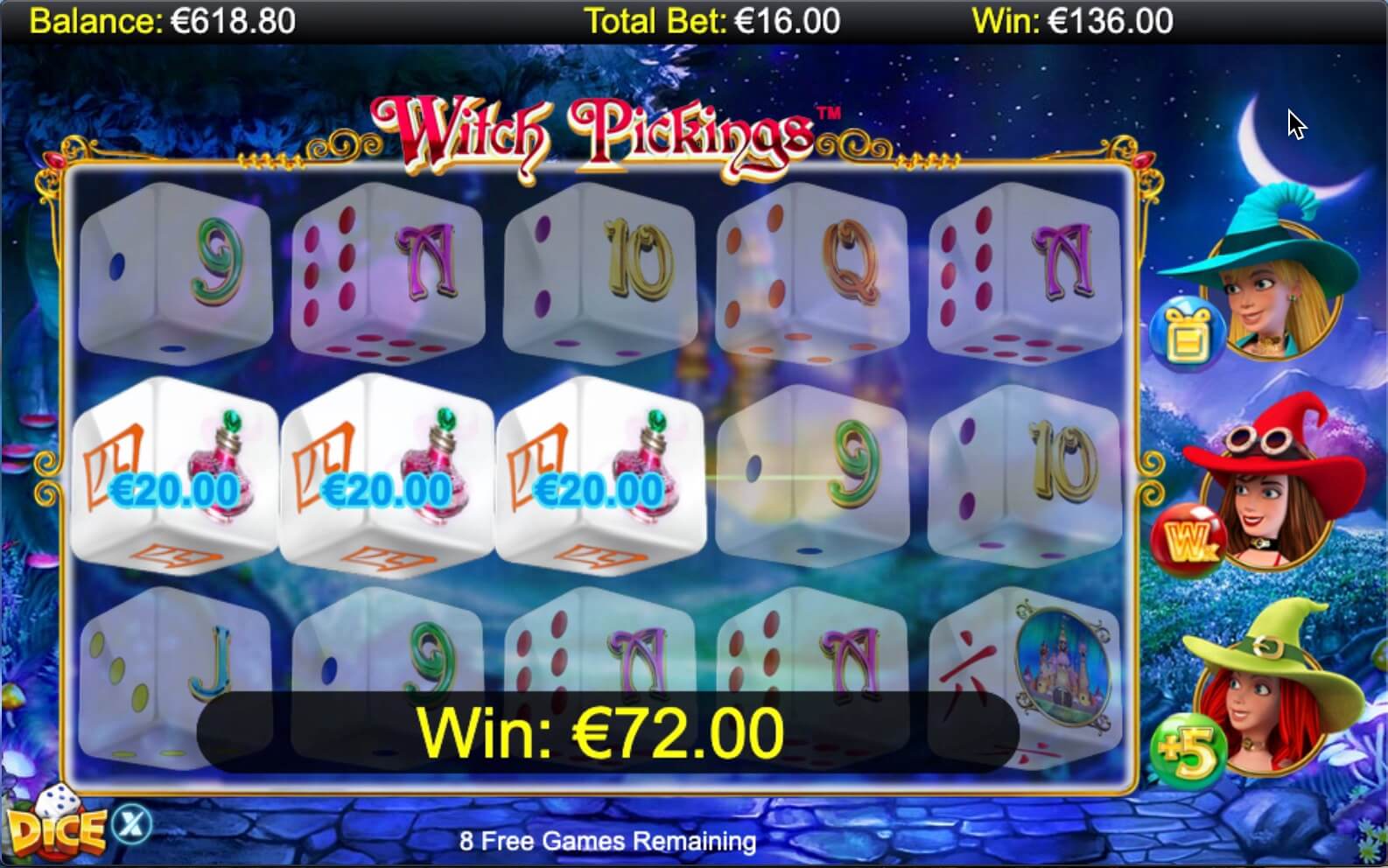 And as for the Green Witch, she has ultimate control over the bonus round itself. She may add 5 extra games to your bonus mode. Also, she may make the line wins pay both ways: left to right and right to left. But only one combination will be paid per line — the highest one.

Also, the Green Witch may multiply the wins by 2, 3, 4 or 5. Even the wins with symbol prizes that already come with a multiplier gets multiplied anyway. No matter how diverse the bonus features are at Witch Pickings, they are still played at the triggering bet, and there is also a chance to re-trigger the feature. 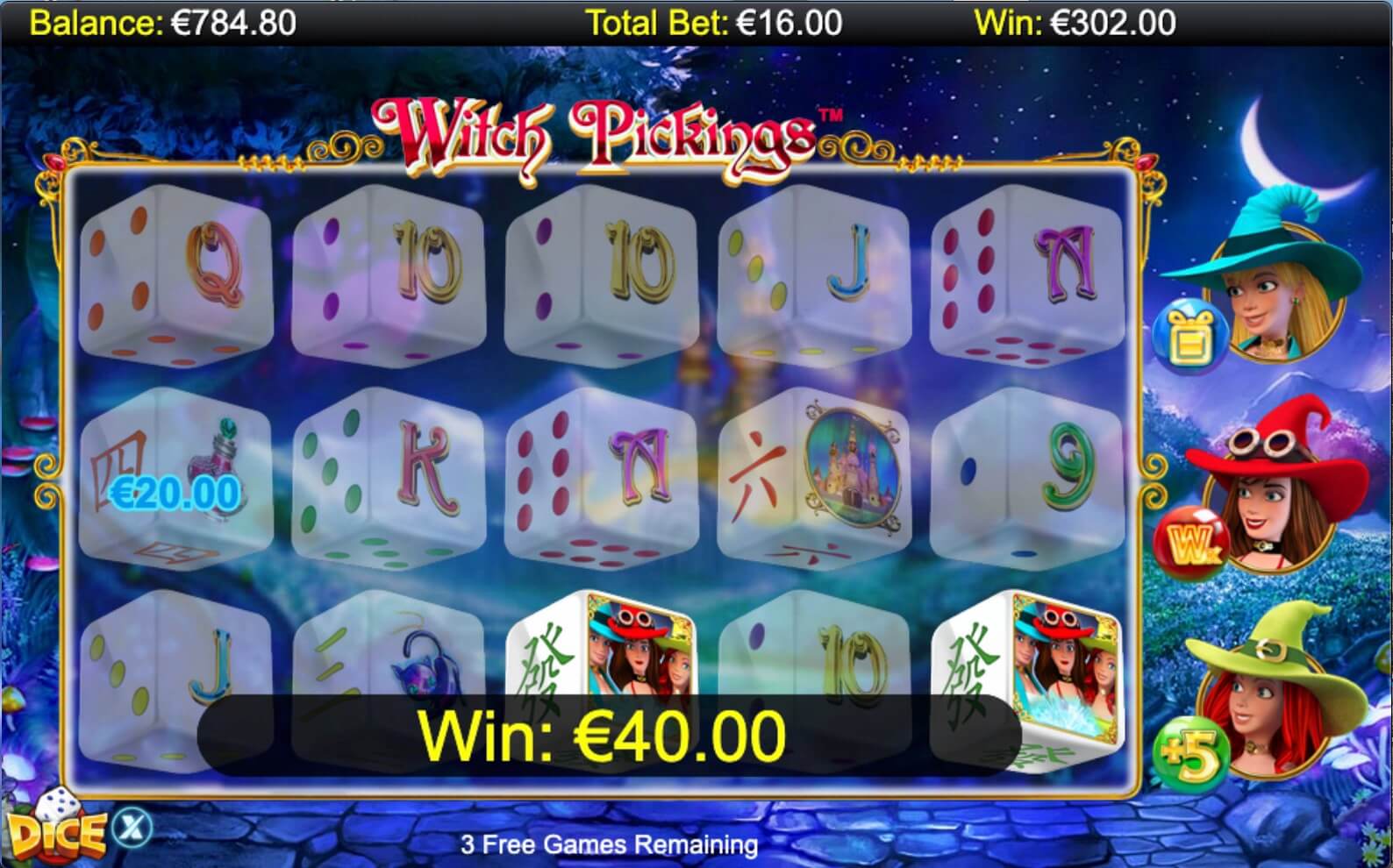 The user’s interface is pretty simple. The betting buttons allow you to change the value of the coin per line. It may go from 0.01 to 0.40. As all the 25 lines are fixed, you can’t change them. The minimal wager for the spin at the 0.01 worth coins will be 0.40. The tops for the spin is 16.00 credits. To figure out the win, you have to multiply the payout value of the combo by the value of one coin. Remember this as there is no match between the number of paylines and coins per spin whatsoever.

Also, there are some extra buttons on the control panel. The one is ‘Trophies.’ There you will be able to check your progress and the bonus features you have hit along with some other milestones. Another knob is for the ‘History and Top Scores.’ It’s where you will find the records of your biggest wins. 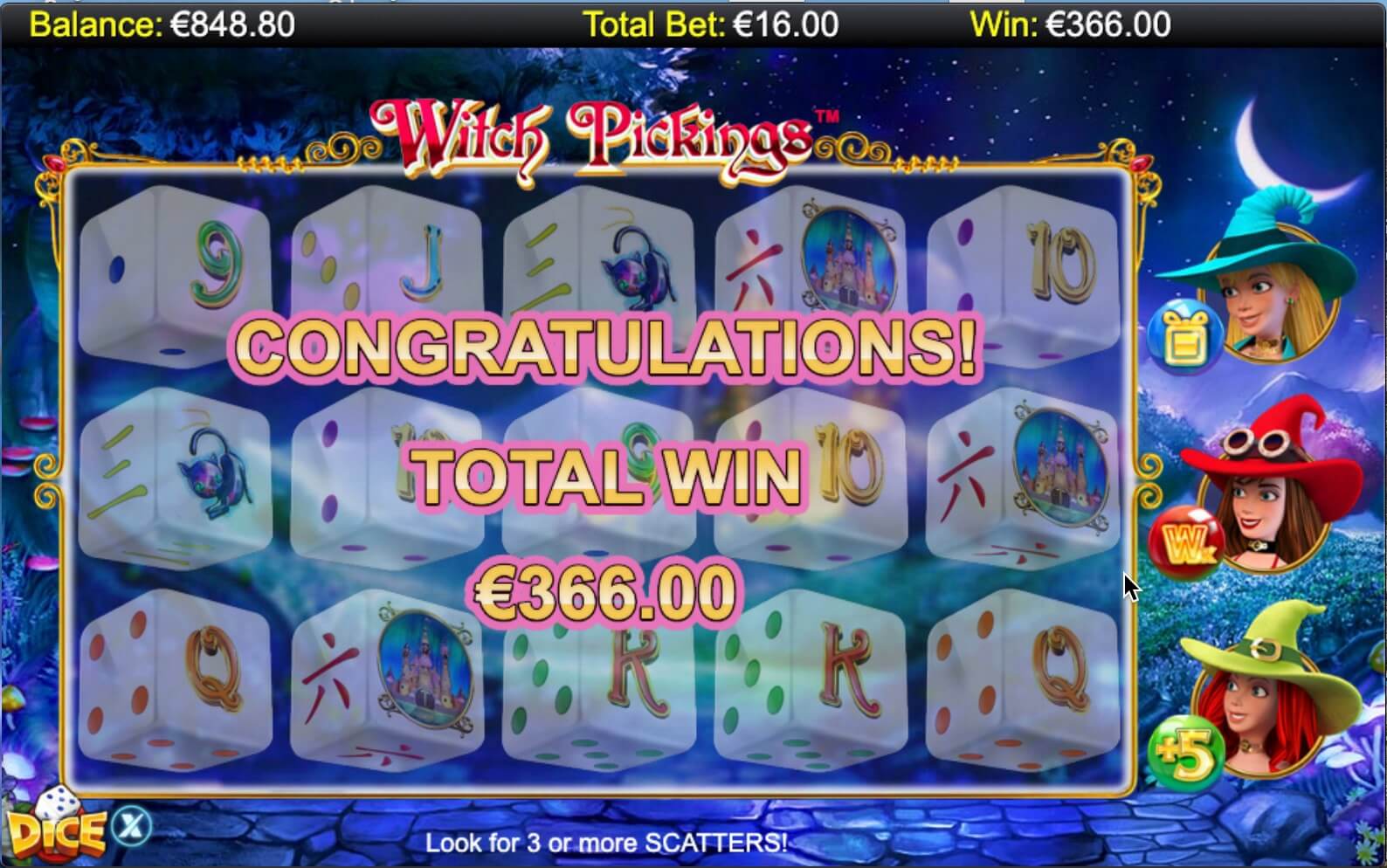 Even if the closest you have ever been to witchcraft is when you wore the supermarket-bought Witch hat for Halloween trick-or-treating. As underneath all the witchcraft extravaganza lies a solid hot slot with interesting gameplay and plenty of extra perks. That’s timeless and that is what really matters here!