One can’t get enough of the Wild West themed slots, right? The more the better! Probably you yourselves have spun plenty of those before. They all are fantastic. NetEnt has offered us its Wild West themed slot machine. Here, you will get involved in one of the greatest train heists of the century. Hope you are ready as here it comes!

The slot’s gameplay is not rocket science, trust us. We have standard 5 reels with 3 rows that can’t really surprise anyone nowadays. But 10 paylines certainly can. All the paylines are fixed, but that is standard for NetEnt. The slot’s general mode is just like in any other slot. Its main idea is simple: spin, hit combos of identical tiles on the reels and get paid. 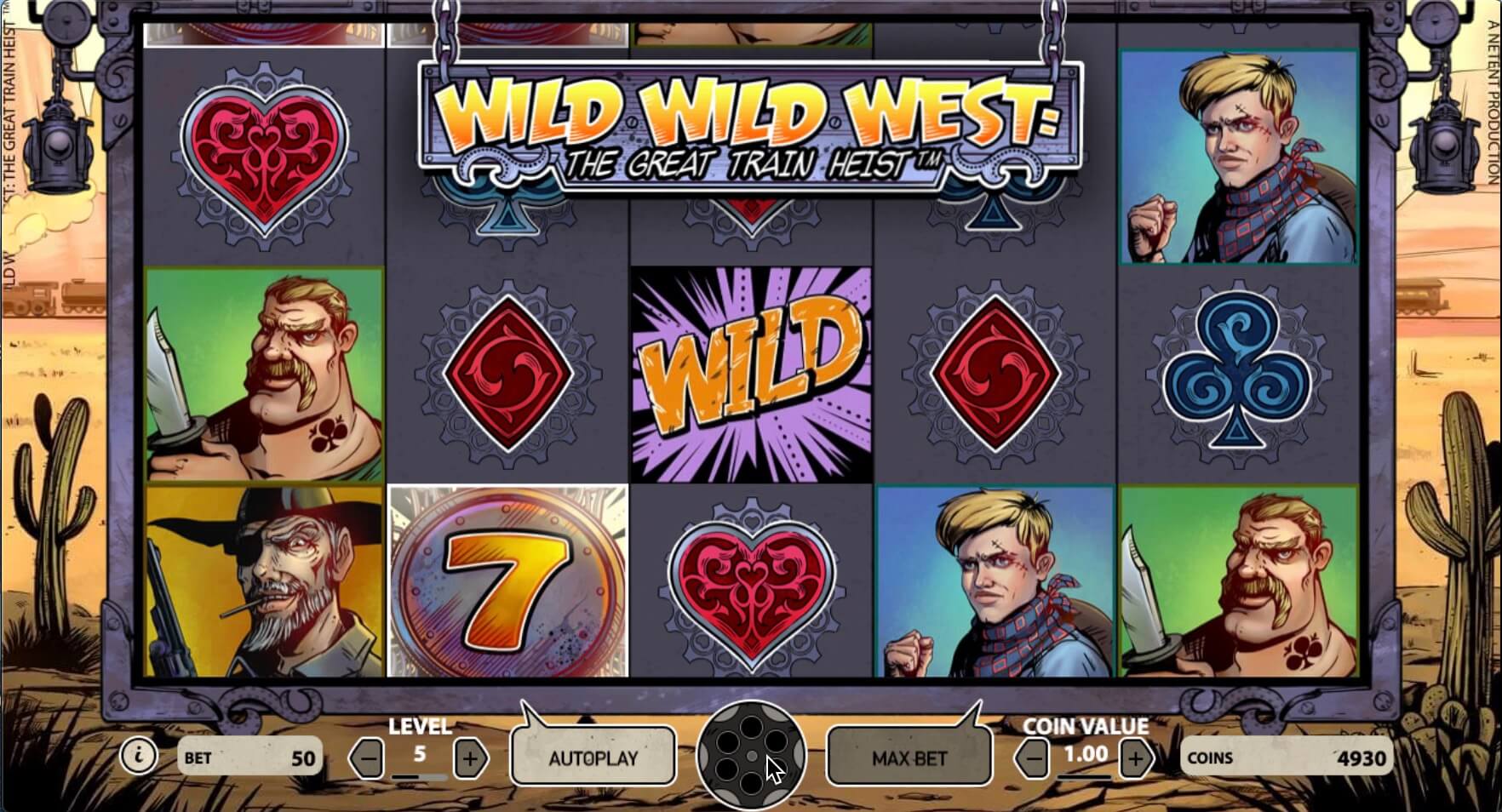 The high-hand tiles of the slot were uniquely designed for it. Those are four tiles featuring four bandits. The tile featuring a young blond Guy with a scar across his face is paid 200x for the 5. The payouts for the Man with mustache and a knife are the same. The one-eyed Bandit wearing a hat is paid more, 300 times the bet for five. And the highest-paid tile of the slot is the female Cowgirl Bandit. 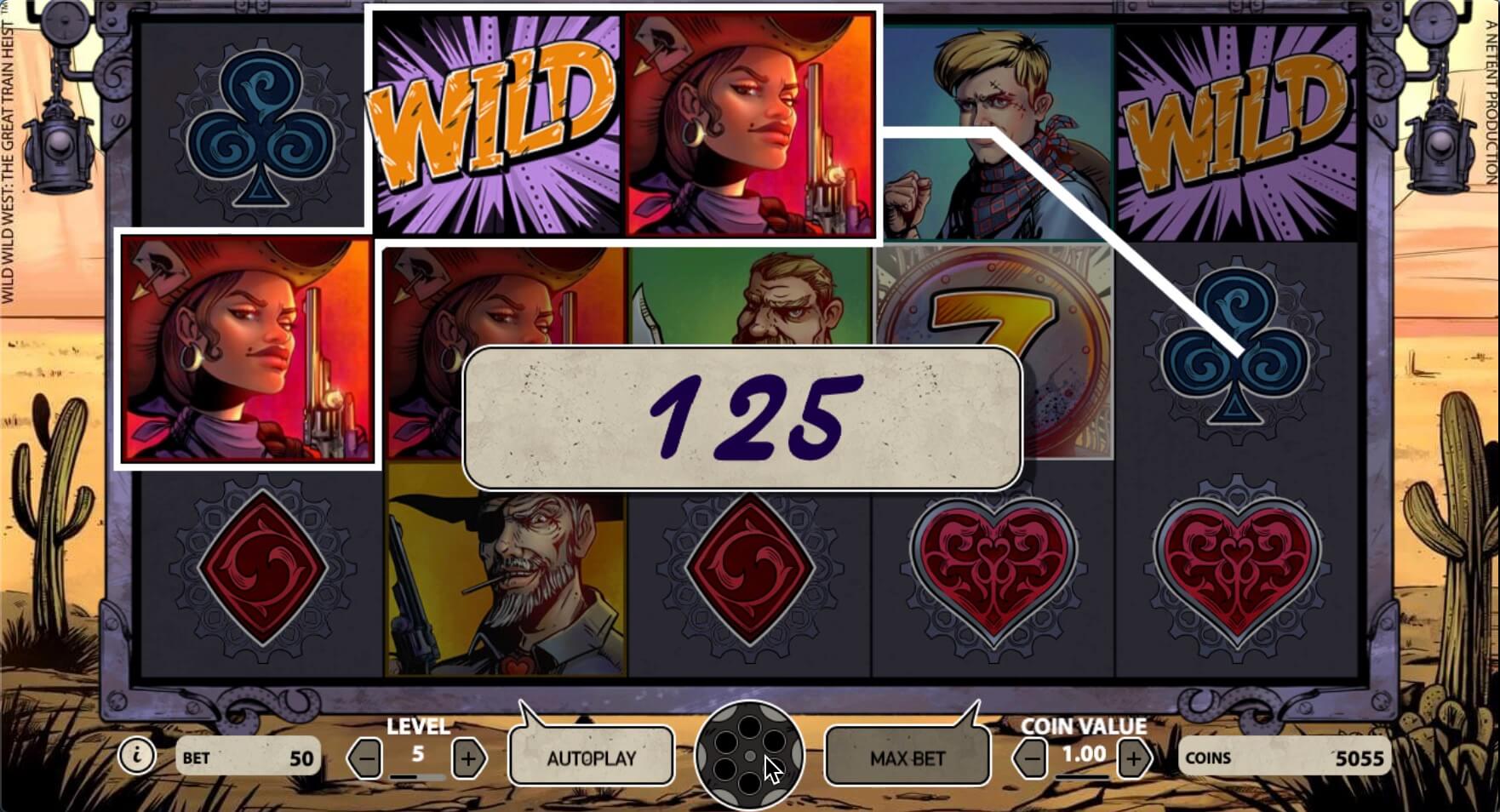 She certainly does look like the lady of the house and is paid 50x for five. What is awesome about the design of those face tiles, is that they match the card suits tiles! The blond boy wears a scarf with a diamond pattern on it. The guy with a knife has a clubs tattoo on his neck. Our lady-bandit has the ace of spades pinned to her hat. And the one-eyed chap wears a heart-shaped pin on his shirt collar. 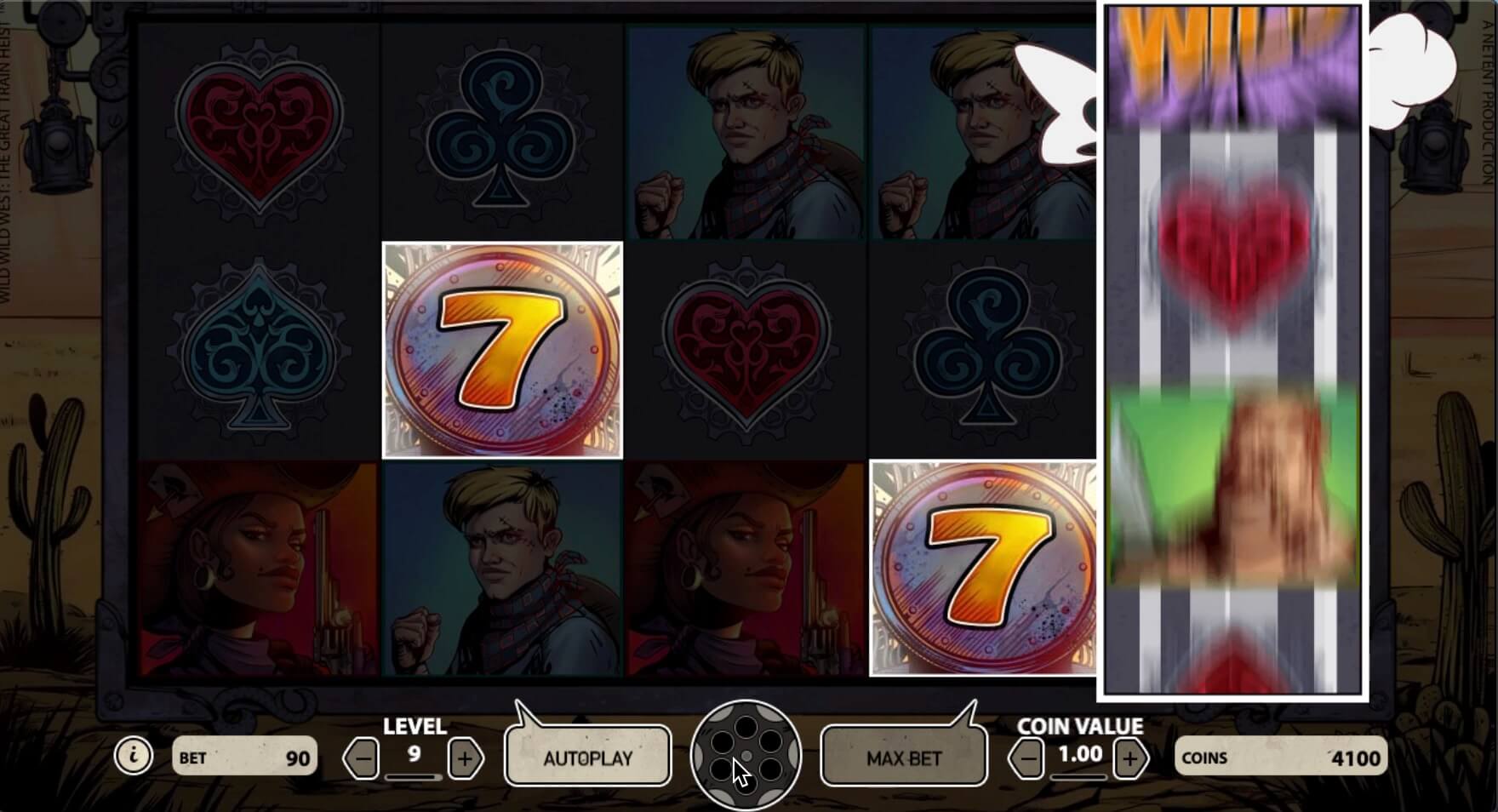 Even though the regular wins are high, usually we don’t care much about the regular mode. The regular game plays of all slots are pretty much identical. And as far as the wins are concerned, they are usually quite modest. What we do wait for anxiously is the bonus features. They can bring huge wins, and they are fun, let’s face it. So what is waiting for us at the Train Heist?

No slot can do without a Wild. The Train Heist went further. They don’t have only one wild. Instead, they have four different wilds. It’s plenty to choose from. Each Wild comes with its own perks, they are all as hot as heck. First, there is a regular Wild. It appears in the regular game mode only and replaces any tile but the scatters. It may also form combos, say five Wilds are paid 500x. 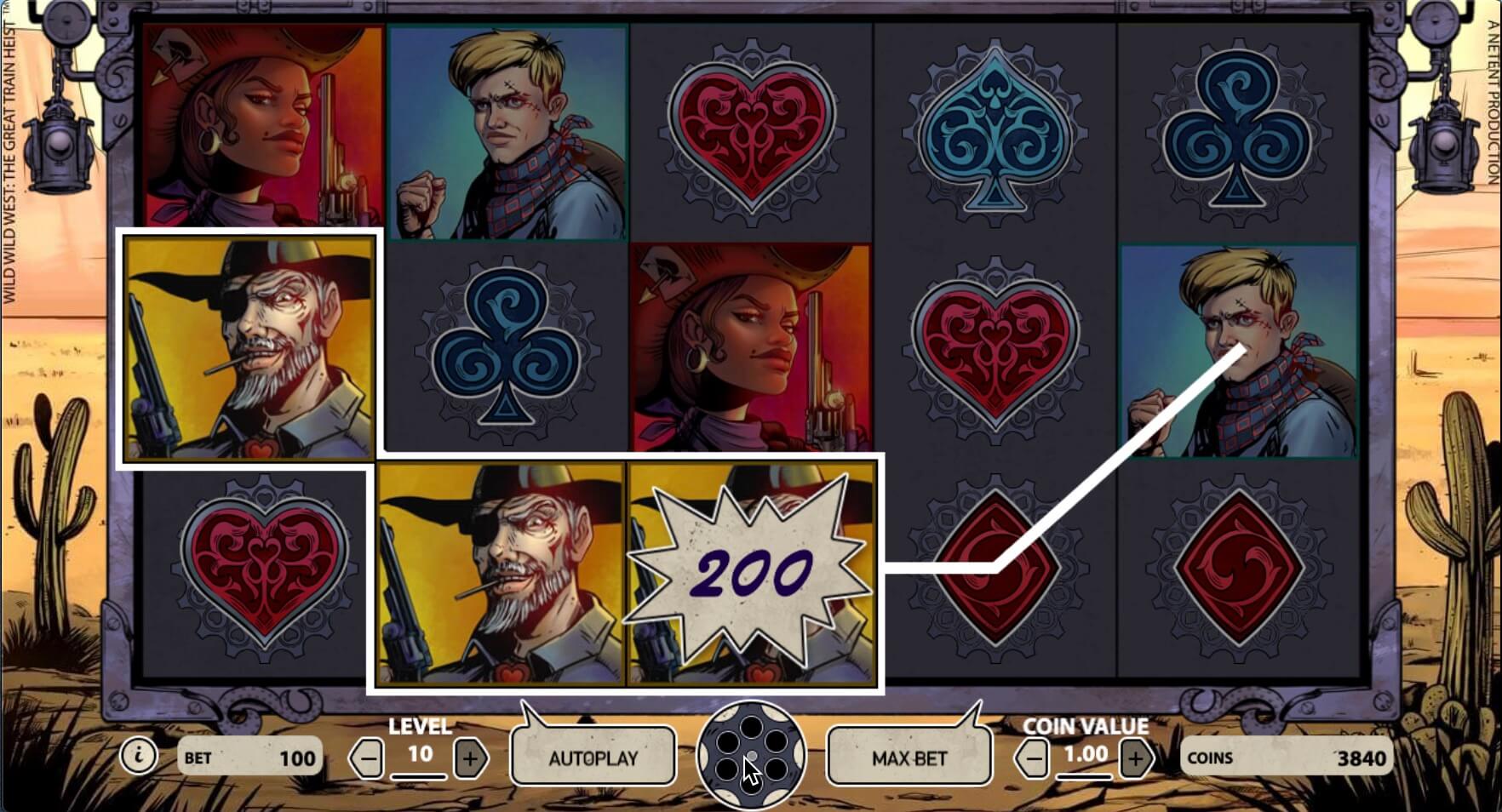 But there is also the free games' mode. It comes with plenty of wilds. To initiate the free games’ mode, hit at least three Scatter tiles in one spin. For three tiles, you will get 10 free games. Four Scatters will give you 20 games. And the max Scatter combo of five comes with 30 free of charge spins.

Each free game session features one of the 4 available Wilds. Like in the regular mode, they appear on the reels while those are spinning. Just like other tiles do. Apart from the regular Wild we have already mentioned, there are also: Expanding Wilds, Spreading Wilds and x2 Multiplier Wilds. All the wilds are pretty self-explanatory but the Spreading Wild. The Spreading Wild turns one diagonal or one adjacent tile into an extra wild. 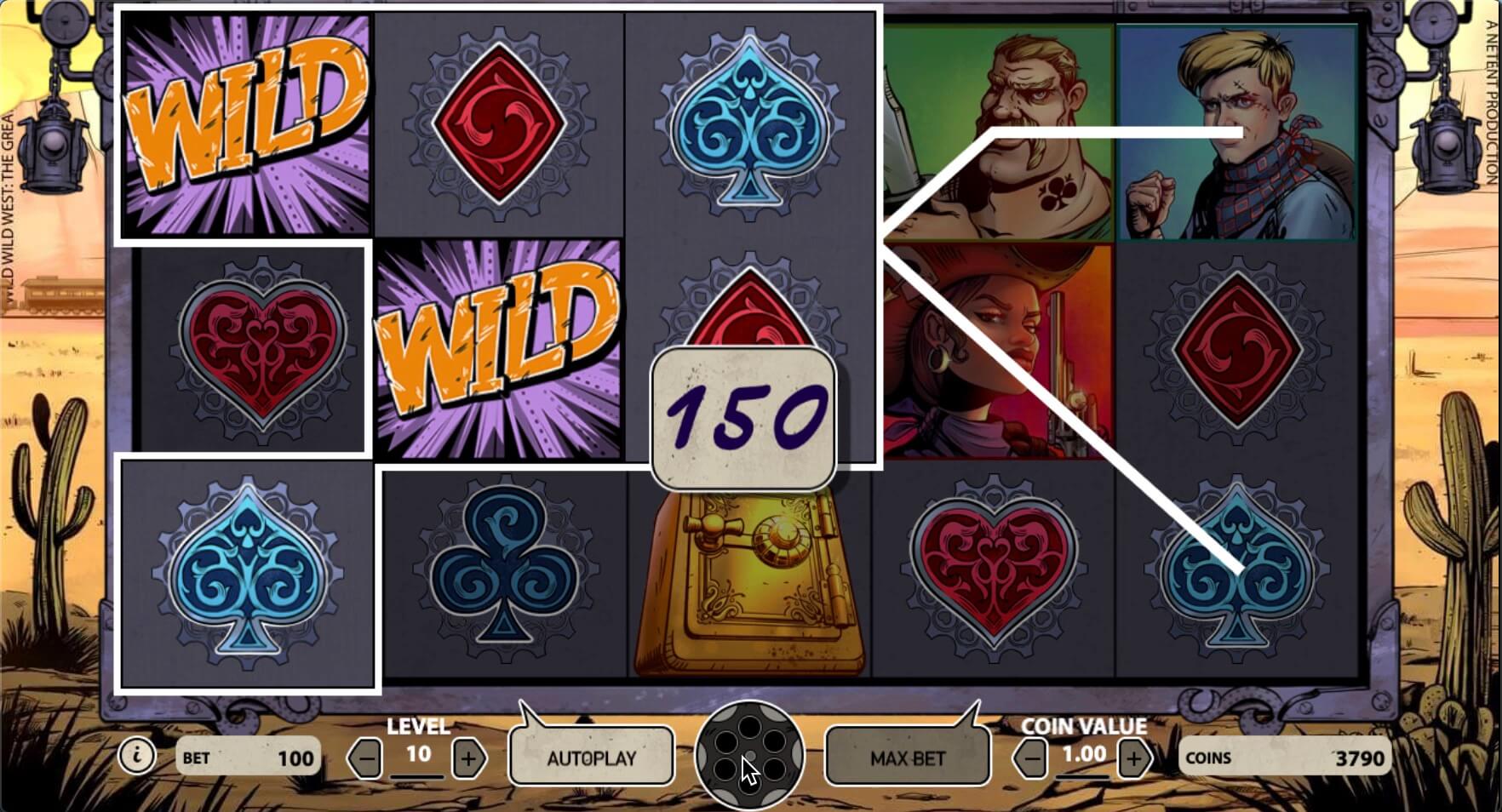 What Wild will your Free Spins round feature is chosen randomly with a spin of a Wild Selector Wheel. But all the wilds form combos and their payouts will be identical to those of the regular wild. Also, during the free games, the Overlay wild symbol appears over the first three reels. It appears randomly. As an active wild feature, the Overlay Wild may appear only over the reels not already covered by other Wilds.

The Free Games can be re-triggered, but there won’t be any additional wild selection procedure. After the game is over, you return to the main mode and your free spin wins are added to your account. 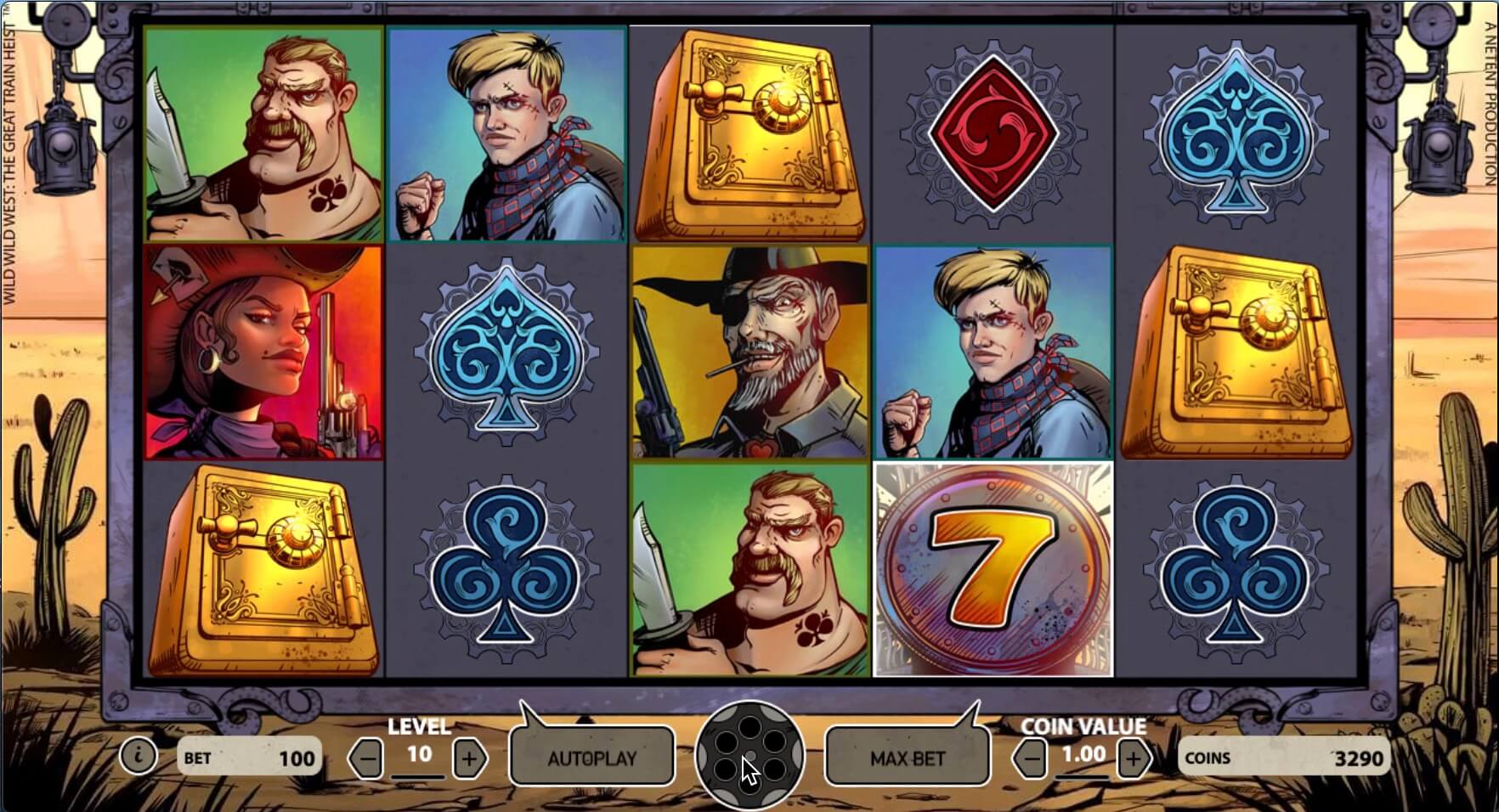 There is one more bonus feature in the Train Heist slot. It’s called the Pick and Click Feature, and it’s a plain pick-me bonus game. To trigger the feature, hit three bonus tiles in one spin. The bonus tile appears on the odd reels only, and they look like a safe.

After you hit the three of those safes on the reels, you choose one and click on it. When the safe of your choice opens, you will receive a coin win. Usually, it is worth 5-50 times the bet. There is only one pick per feature. 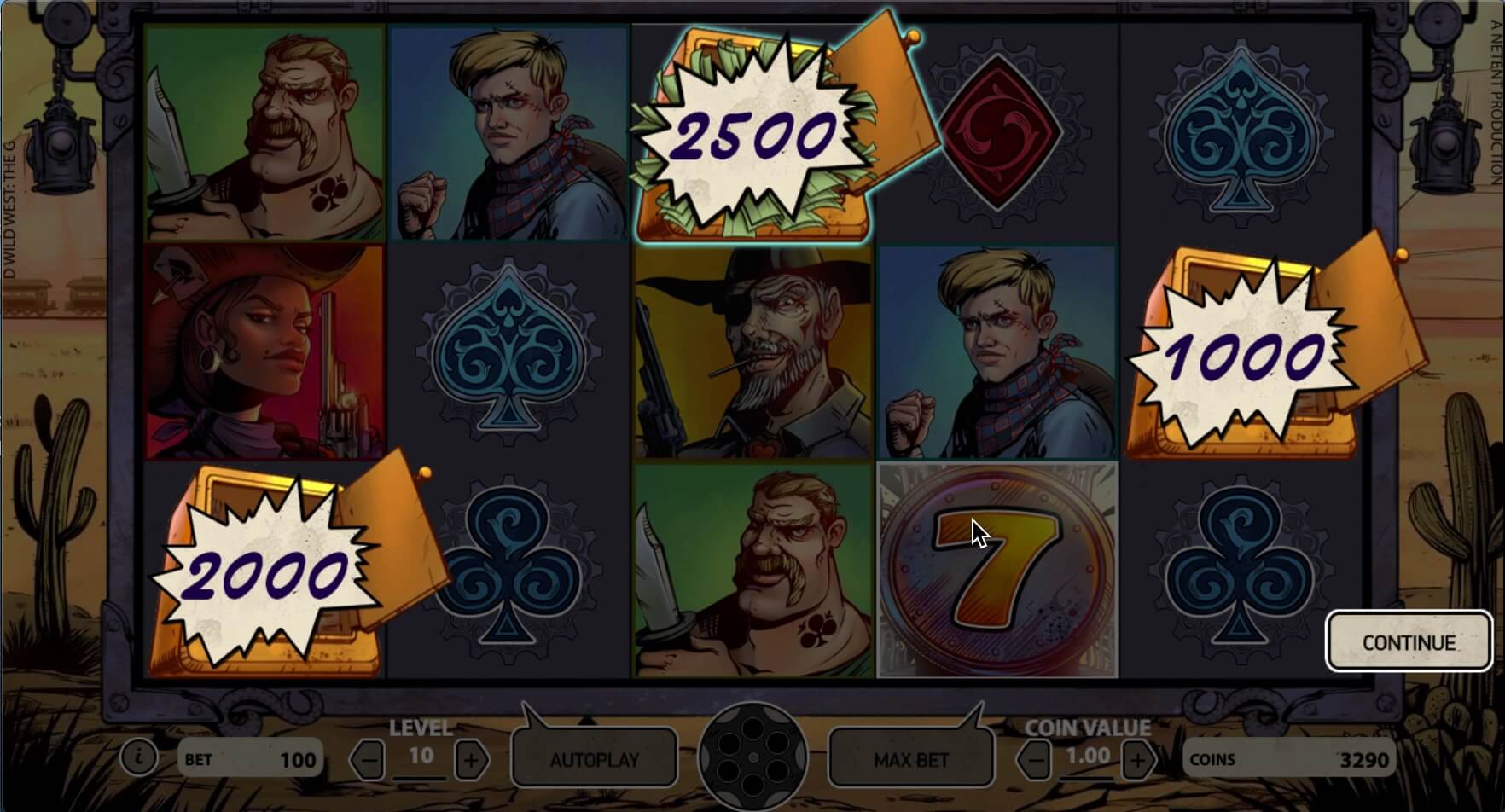 Betting at Train Heist? Nothing’s easier. Select the coin value and the betting level. The coins are worth from 0.01 to 1.00. And you may choose one of the available 10 betting levels. Thus, your total spin wager will be anywhere from 0.10 to 100.00 per spin. It doesn’t strike us as a big wager, but as there are only 10 paylines, the winnings are quite substantial.

So would we recommend the Wild Wild West: The Great Train Heist? Certainly. We enjoyed the regular mode payouts immensely, but it’s the Free Spin feature that simply rocks. So many ways to win in the Wild West. So let’s keep on spinning!