What can be more enigmatic and amazing than the jungle? Nothing catches the eyes like this place: scary and dark, but full of hidden treasures. Knowing this, Nextgen has introduced us to the Wild Run slot. The Jungle Book for the grown-up boys and girls who now enjoy going into the wild in a slightly different manner. Let’s figure the Wild Run out!

The Wild Run is a 243-ways-to-win slot. It has the standard five reels but no lines. The main idea is still to hit a combo of identical tiles. But as there are no lines, the tiles are landed on the adjacent reels instead. It doesn’t matter what stop the tile lands on. All that matters is that the tiles hit successive lines and there are no gaps between them. The minimal combo is a standard three-tiles one. All the play combos have to start from the leftmost reel. 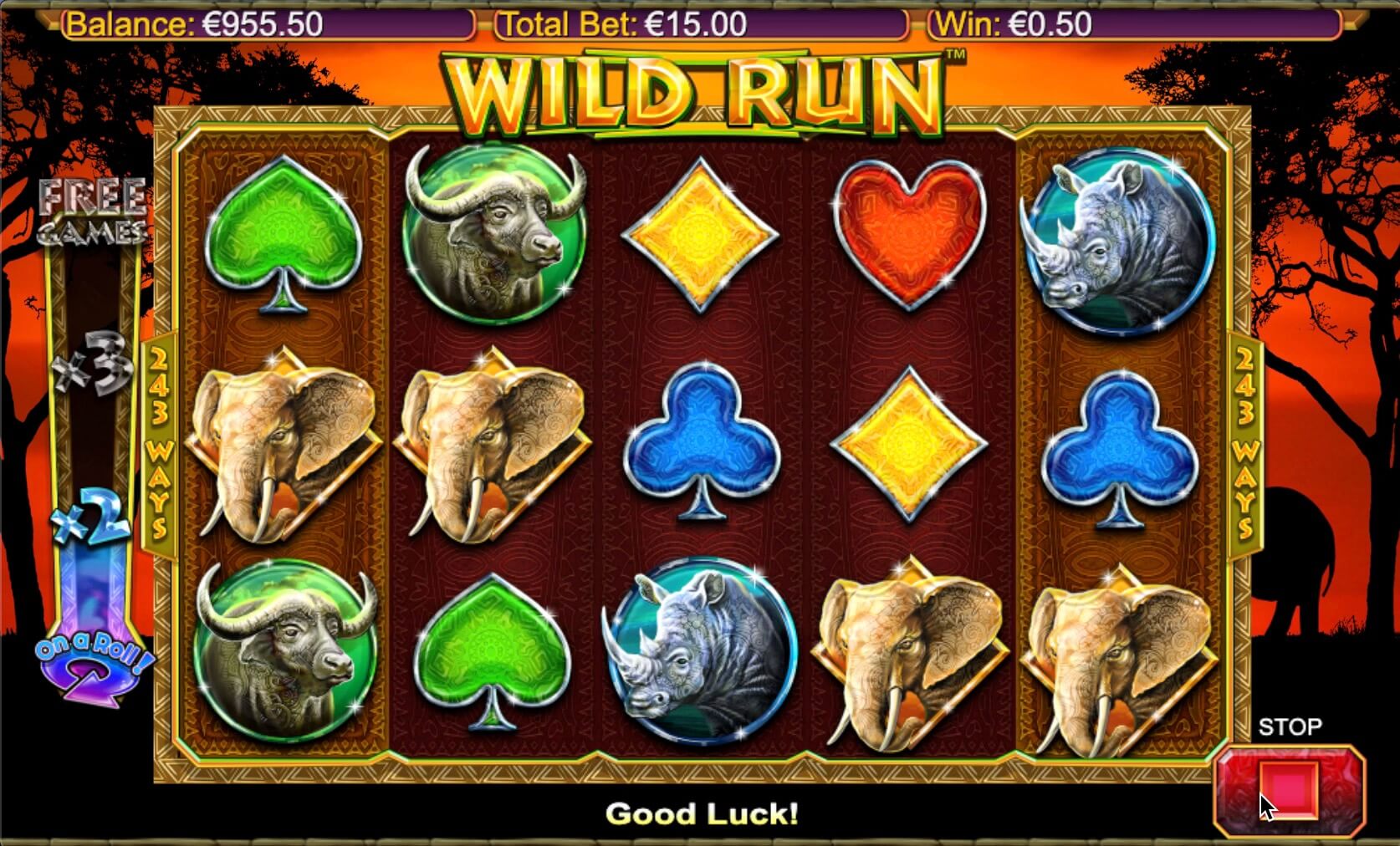 The paytiles at Wild Run are of two kinds: the cards-borrowed and the unique tiles with different animals. Here, the cards-borrowed tiles are the four card suits. We get red Hearts, blue Clubs, yellow Diamonds and green Spades. Their payouts are identical. The minimal combo of three is worth 1x the coin. For four of a kind, you will get your coin value multiplied three times, and five of one kind are worth 3 times the coin value. As you can see, the payouts are rather low-hand. 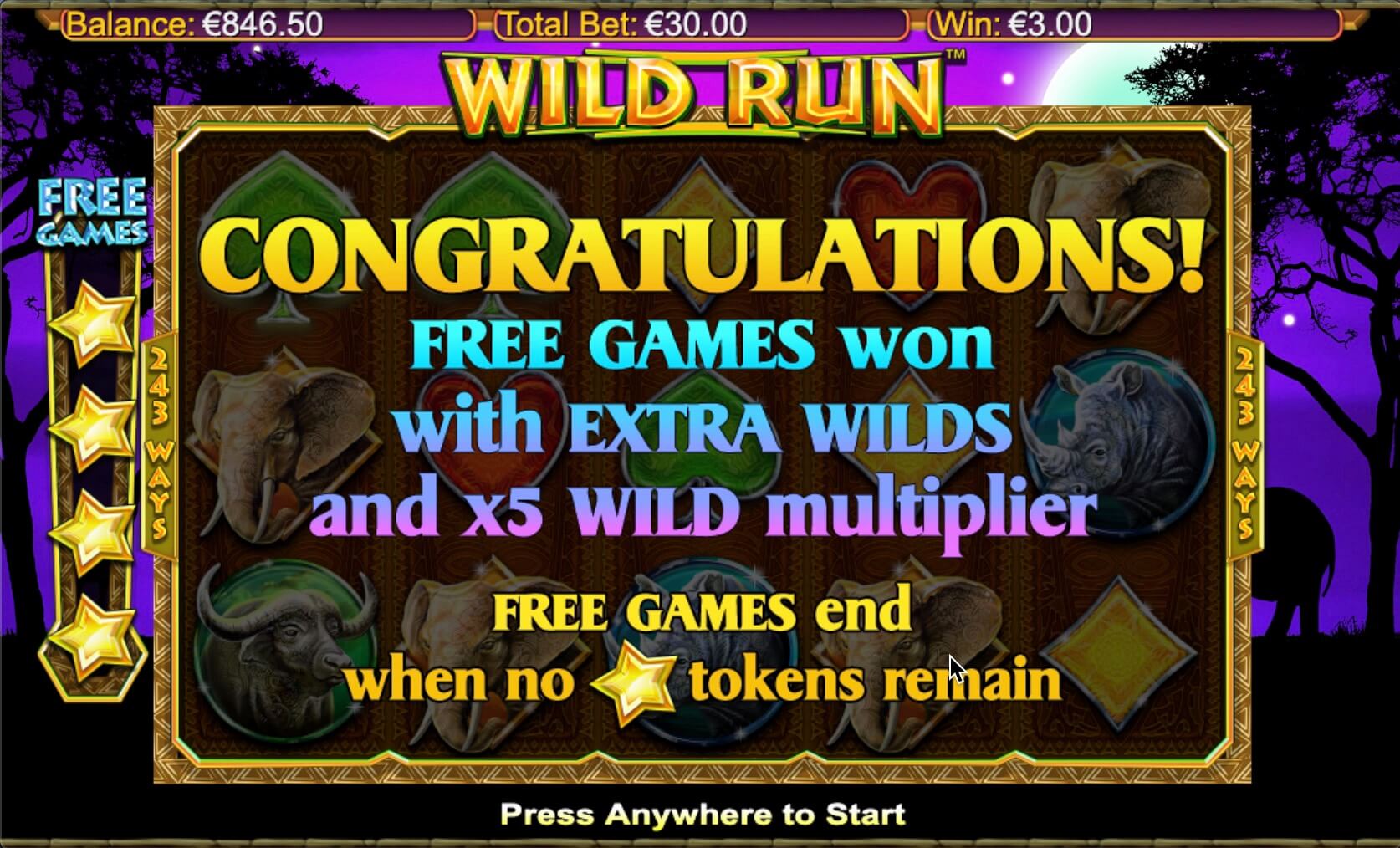 But when it comes to other tiles, the payouts are more generous. There are four more tiles, let’s call them high-hand icons. Those feature different wild animals. Five Buffaloes or Leopards are worth 50x the coin. The Rhinos are paid 80x the coin for the set of five. The highest paid regular tile is the one with an Elephant. It’s worth 100x the coin for the max combo. The regular game mode seems pretty basic. Besides the 243 ways to win concept. But Wild Run features several peculiar perks. They are worth paying attention to.

First, we have to mention the slot’s wild. It’s an icon with a Lion. It looks exactly like Mufasa, which is sweet. First and foremost the wild is a substitute for any other tile in the game, and also it may form combos itself. The set of five Wilds is paid 800x the coin. The most important of the Wild’s perks, though, is that they appear when the On-The-Roll feature is triggered. 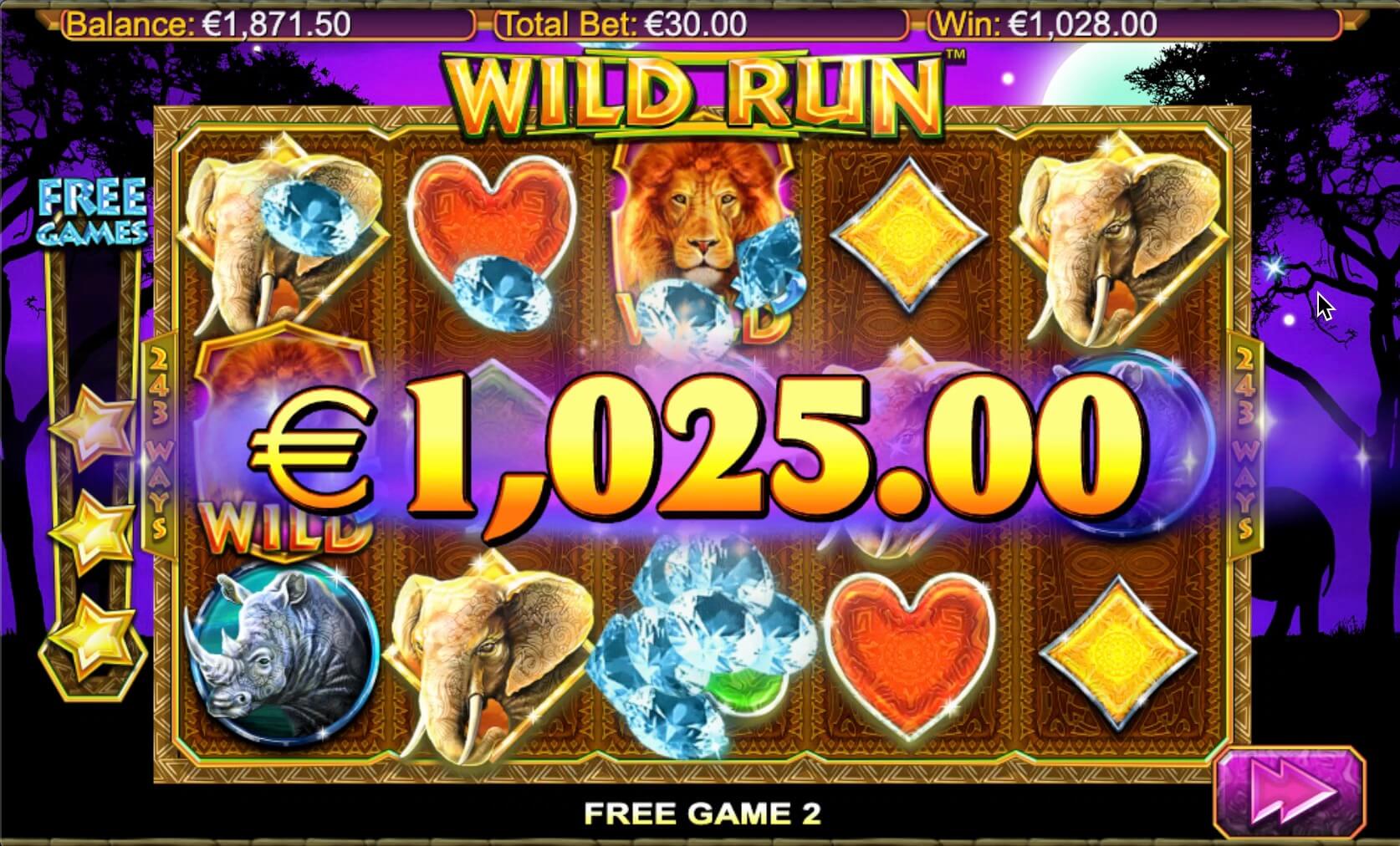 So what is On-The-Roll feature? We have found it rather intriguing at first, but basically it is a set of extra features added to the standard game progressively. The feature comprises four levels. Its zero level is activated after the first win. The lowest widget of the On-the-roll meter will light up. Afterwards, the Wilds are added to the gameplay: they are added to the 1st and the last reels. 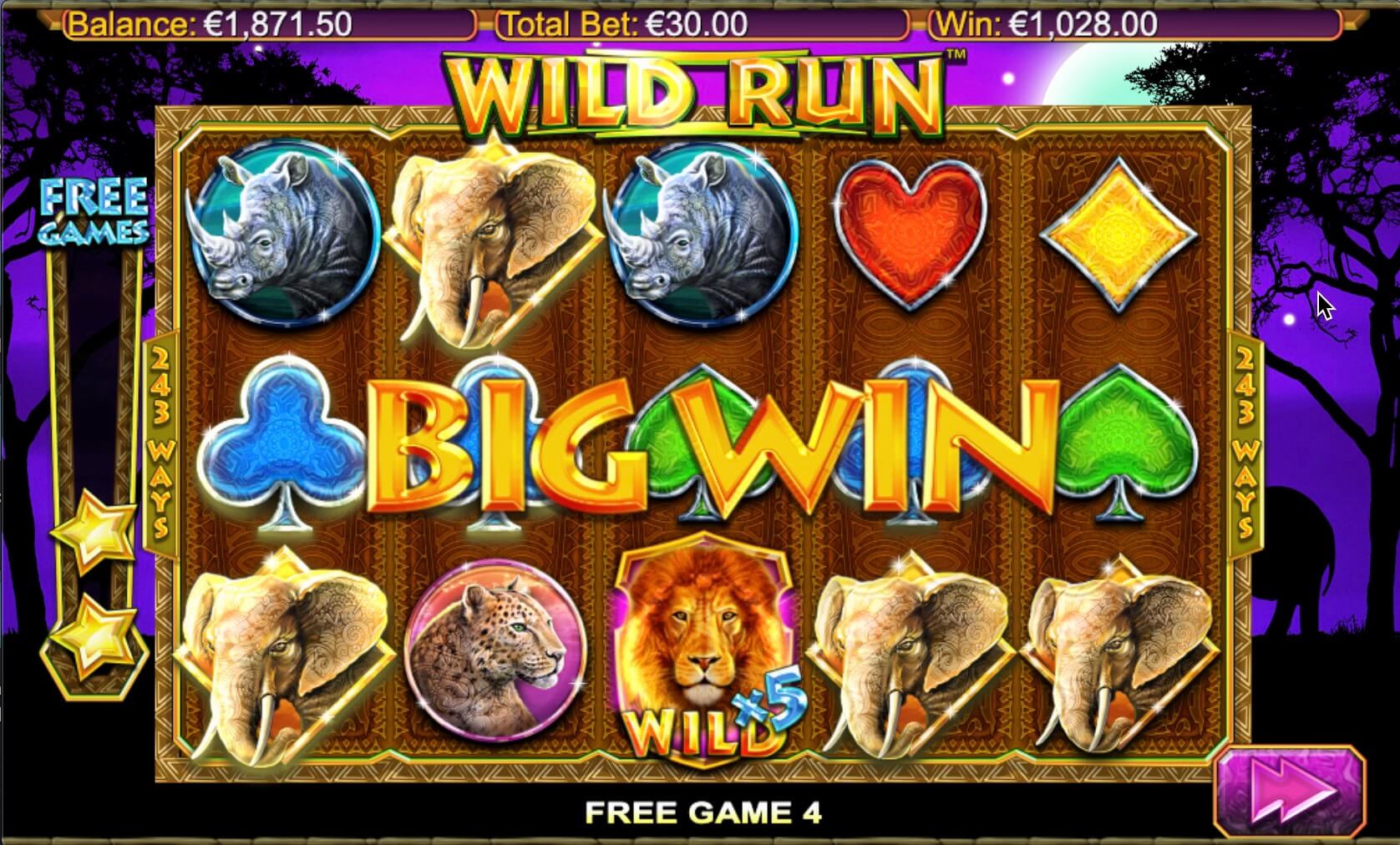 It will no longer be a standard ‘Play’ button, it will change to ‘Continue’ button. The spinning will go on automatically. No way you can stop the next spin when you are on the roll.

The top level of the On-The-Roll feature is the Free Games round. To trigger it, you have to win on the second level of the feature. At the free game mode, the wilds appear on all the reels. Free spins are played at the triggering spin wager, but they come with 5x multiplier. There is no exact pre-set number of free spins. The feature goes on until there are 4 successive non-winning spins. After the feature is over, the On-The-Roll meter gets reset. 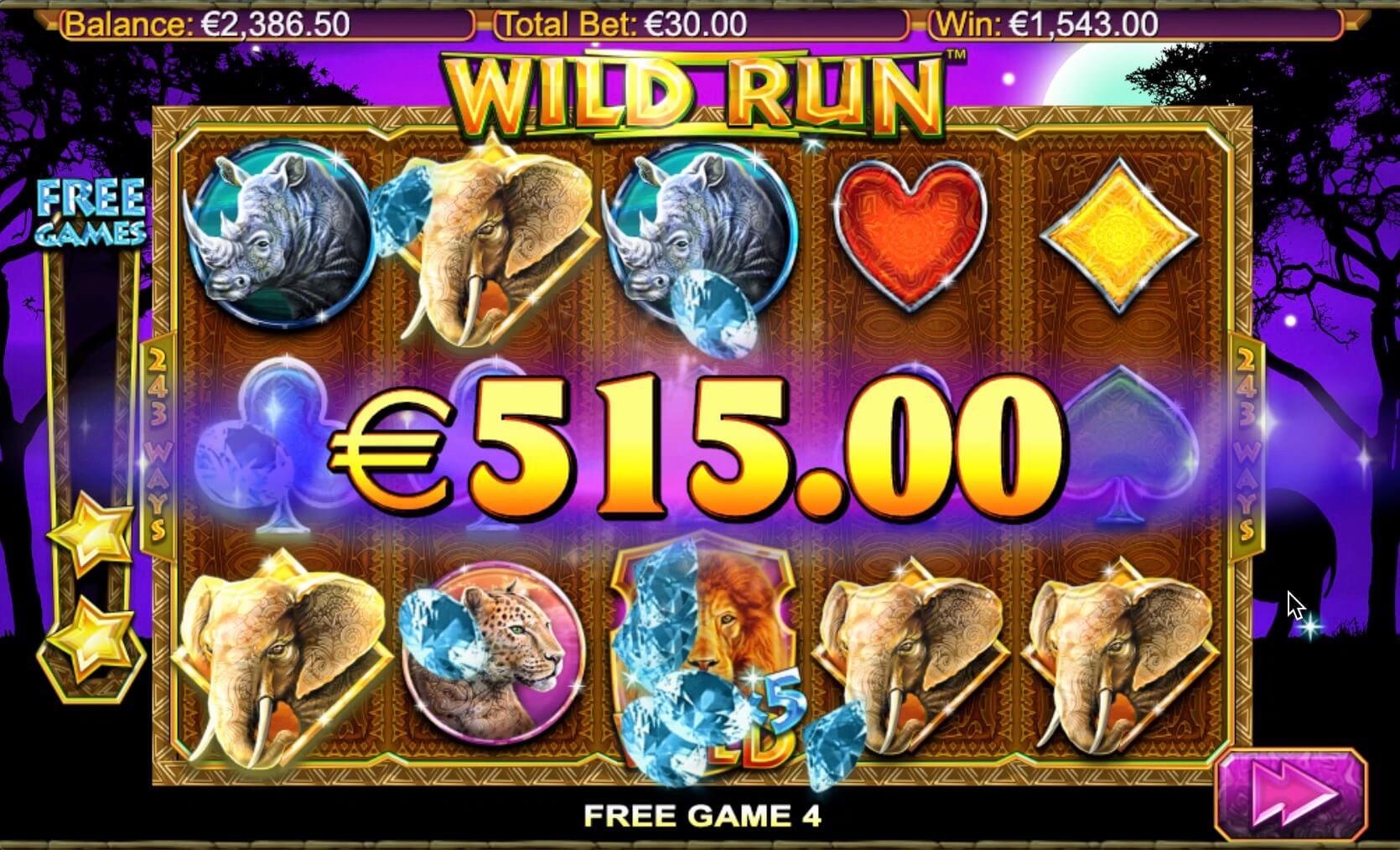 Sometimes the hardest issue with the 243-ways slots is the betting. It’s somewhat unclear how to calculate your wins and stakes without lines. Well, here the concept is simple: don’t count the lines, count the coins. Each spin there are 30 coins wagered. Each one may be worth from 0.01 to 25.00 credits. Thus, your total wager may go from 0.30 to 750.00 per spin. Calculating the wins is done with the coin’s value as well. 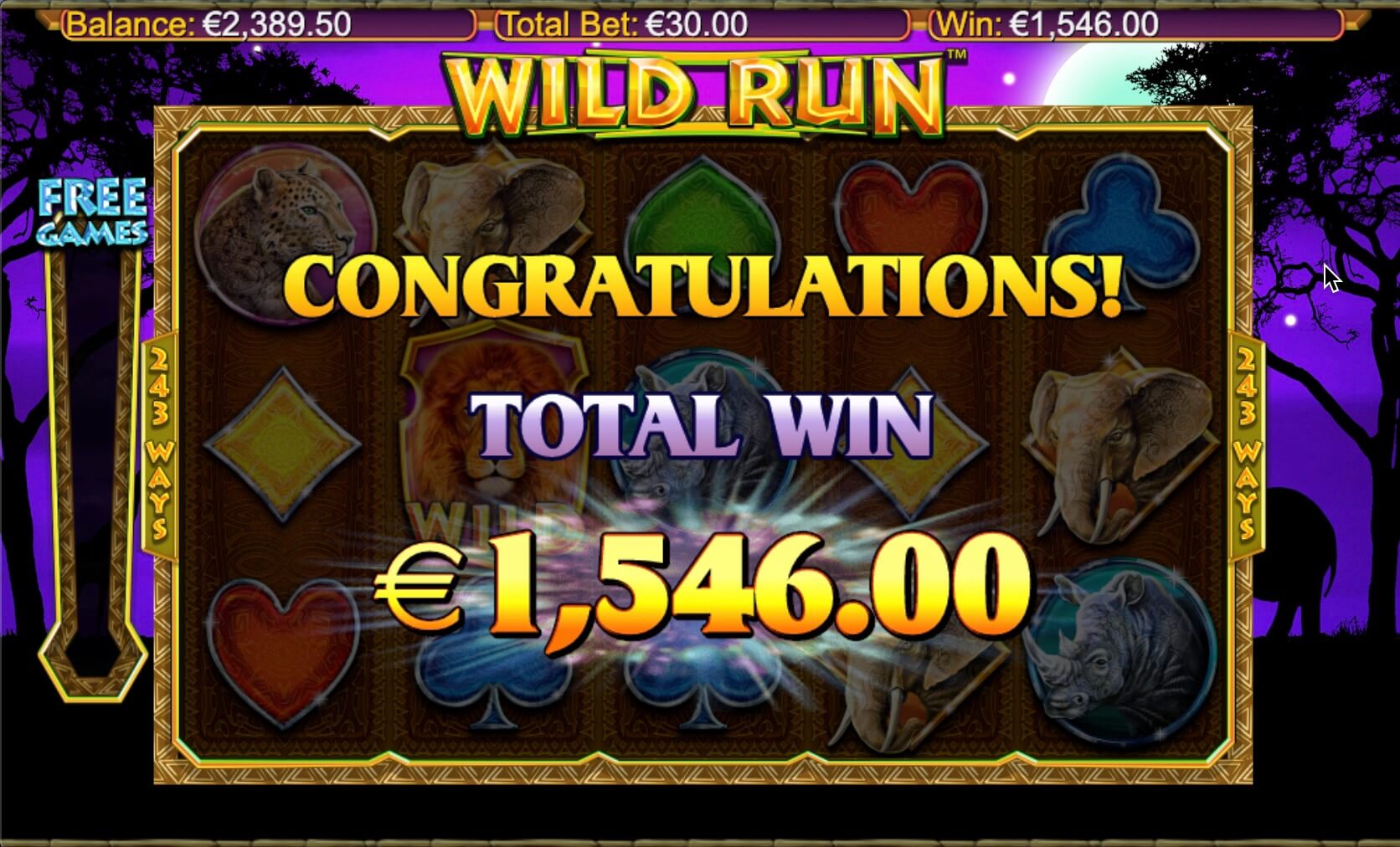 All the payouts are done according to the paytable. All you need to do is multiply the payout from the paytable by the coin’s value, and you will know your win.

Remember: living in the jungle you have to live as the jungle does. Only the fittest survives here. But no matter how hard jungle life might be, keep in mind what Arthur Miller once said: The jungle is dark but full of diamonds. And judging from the slot, it’s full of wilds as well. Stay strong and look out for your wins among the dark heavenly woods full of wilds.