Imagine you could get any bonus feature in a slot, what would you choose? A crazy idea, you might say! Not at all! Just check out a slot bazaar introduced by NetEnt. And it has everything any player desires. Including a huge selection of bonuses. Just take your pick.

Everyone expects to see a blaze of colors at a bazaar and you might be a bit disappointed seeing muffled hues on the screen. But the NetEnt guys went for the perfect graphics and decided to smooth it out with dimmed colors. The reelscreen is basically a counter at a bazaar stall. It’s filled with all sorts of jewelry and other bric-a-brac. All the icons are precisely detailed and perfectly animated: slightly but right to the point. The visual of the screen is just perfect! 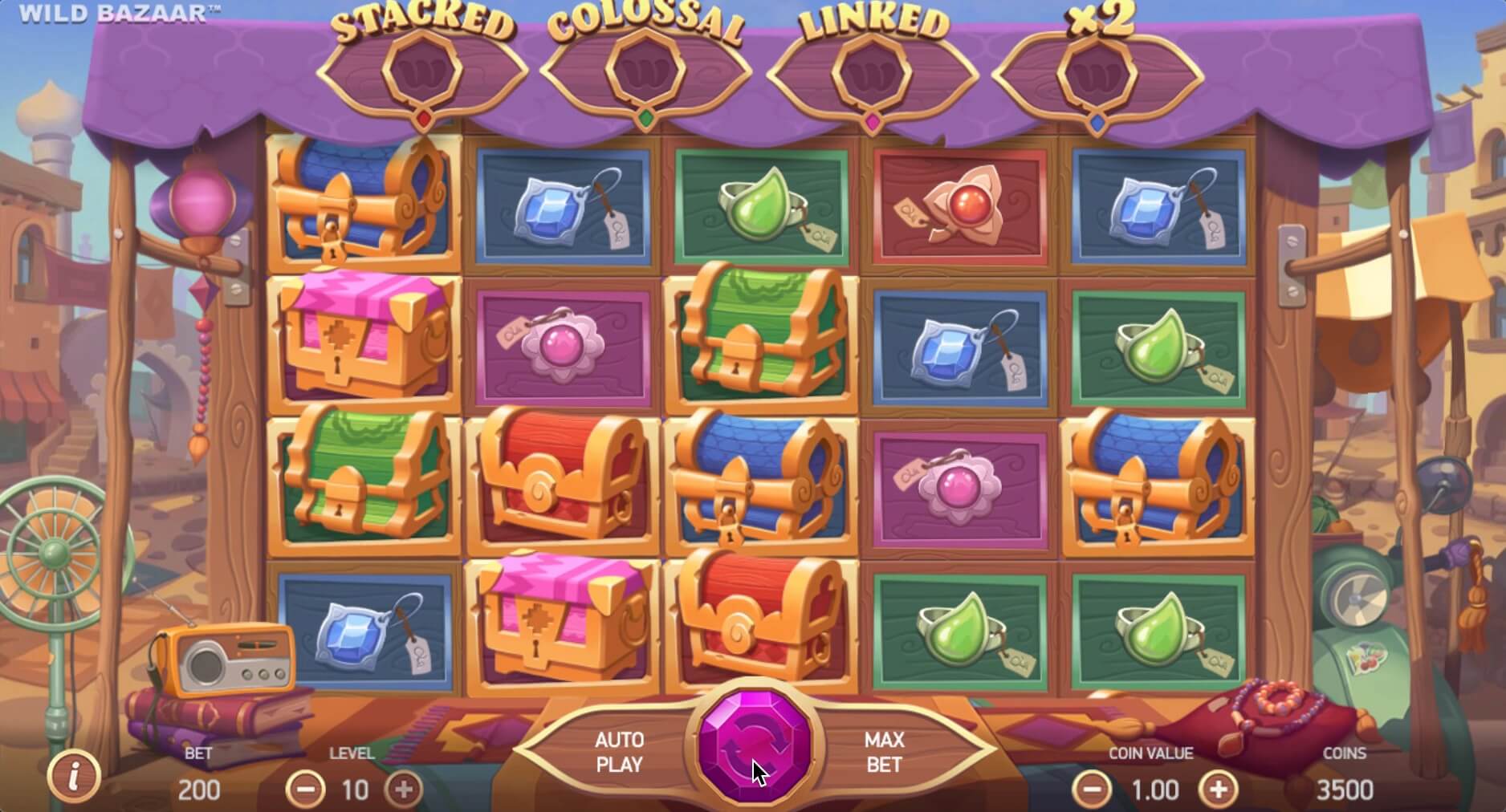 The Wild Bazaar’s regular gameplay is simple: 5 reels, 26 fixed lines and the standard goal of hitting a winning combo on any of them. As usual, the combos have to start on the leftmost reel and comprise at least three tiles of one kind. There are eight paysymbols in the slot. All of them are unique. First, there are four jewelry pieces in different colors. Their payouts are identical. For the minimal combo of three, you get a 10x payout. 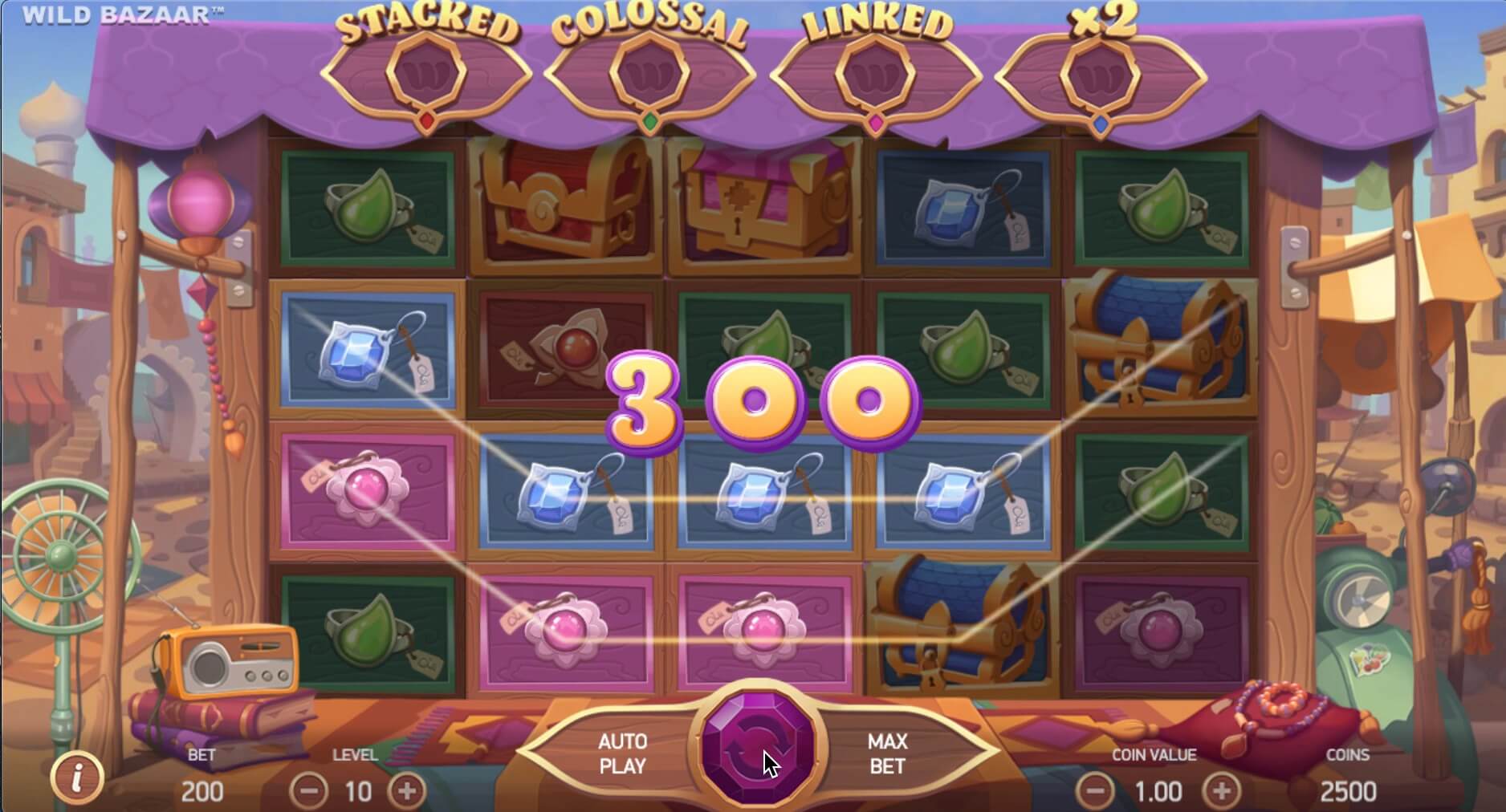 For the combination of four tiles of a kind, the payout will be 20x. And the max combo of five is paid 40x. Then there are four tiles with chests of different colors. Their payouts are also identical: 20x for the three, 40x for the four and 150x for the set of five. These payouts are for the first betting level. The higher your level, the bigger are your wins. We’ll talk about it a bit later. 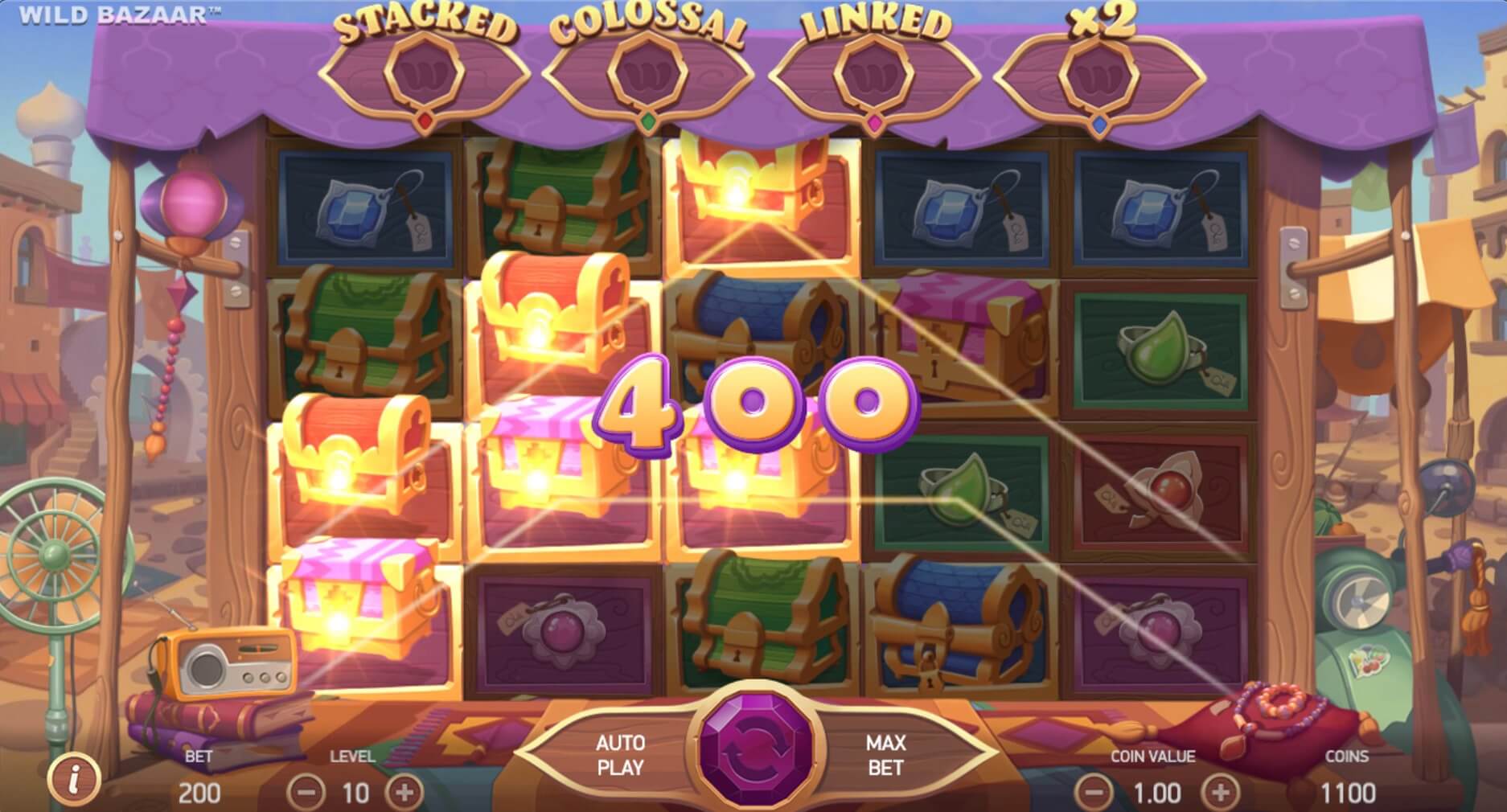 Apart from the regular game mode, there are some bonus features. And all of them are wild features hence the name of the slot. But the game itself has no Wild. Weird, you say?! The wild bonus feature is initiated by the combination of chests of one color that appear on the same betting line consecutively.

The number of spins depends on the number of chests in the triggering combo: hit three chests and get three spins, hit four and get four spins, etc. And the color of the chests determines which game will be played. 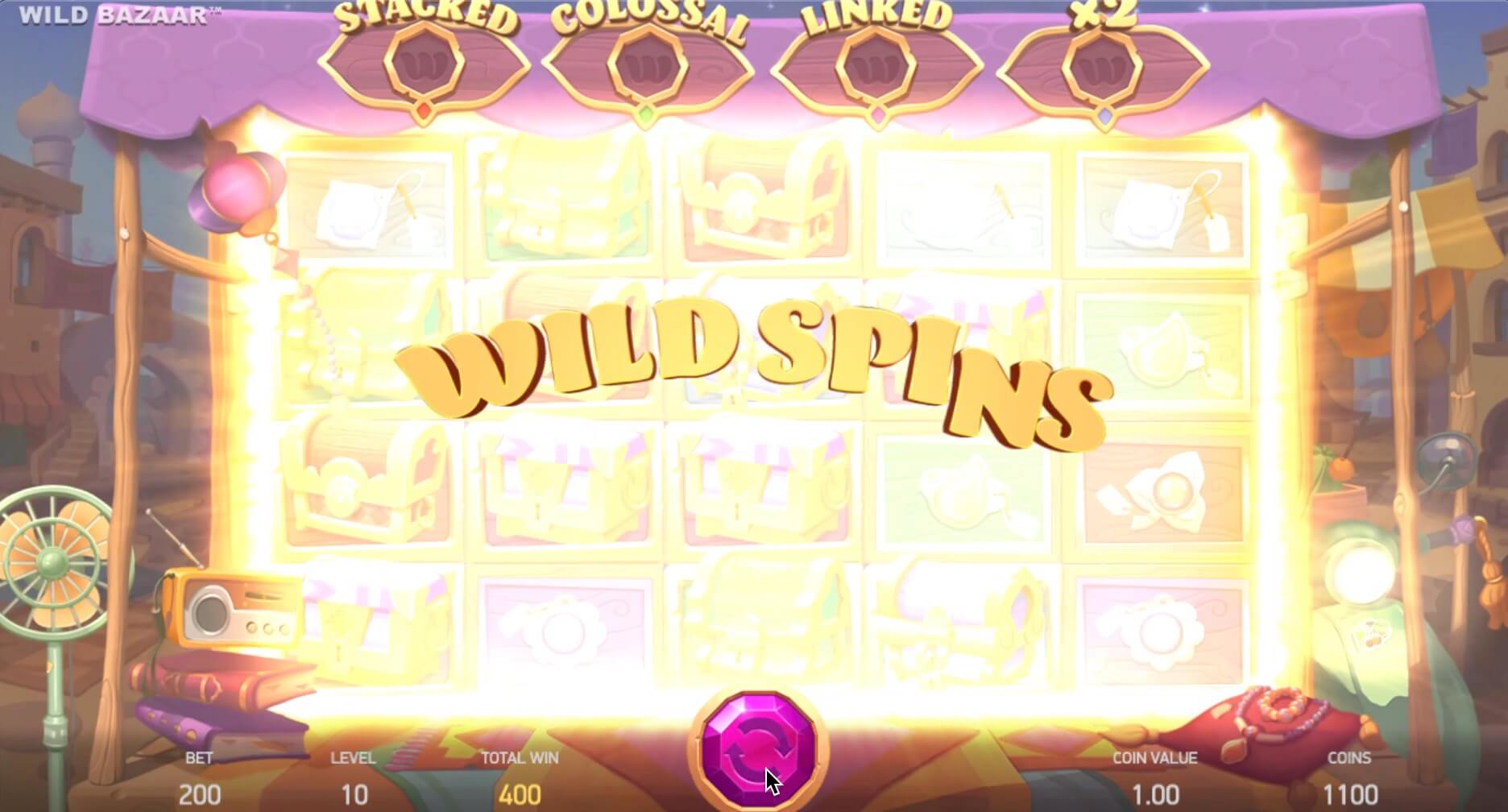 The Wild finally appears at the wild mode. Its functions differ slightly from round to round. At the Stalked Wilds Round, the wild tiles will appear in stalks of four icons. At the Colossal Wild Round, the wilds appear as huge symbols of 2x2 tiles. When the Linked Wild Game is activated, if the wilds appear at both ends of a horizontal row, they turn all the tiles in between them into wilds. 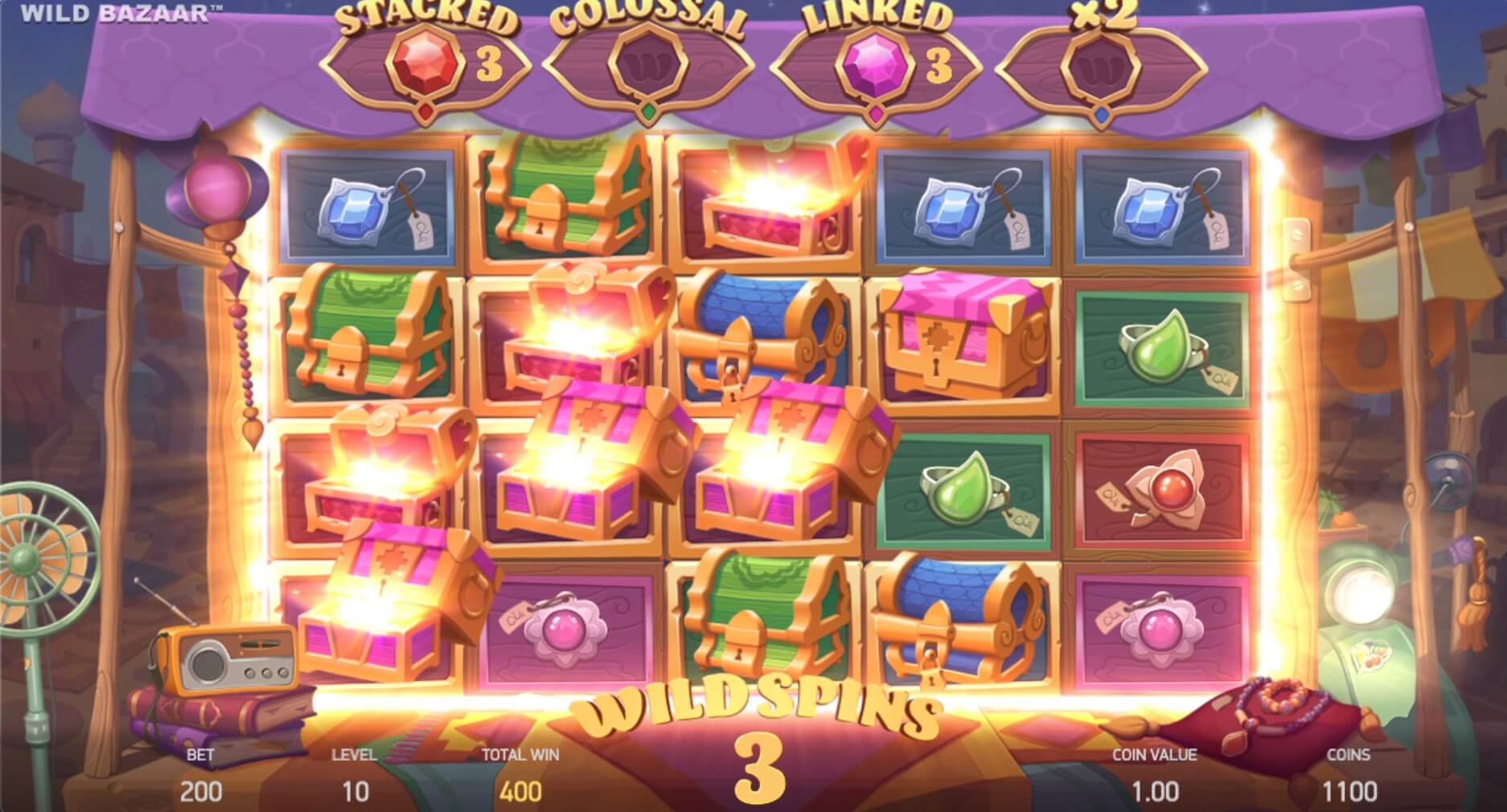 During the x2 Multiplier Wild Game, all the combos with a Wild tile have their wins multiplied by two. Apart from it all, the Wild is also a paysymbol. The combination of three Wilds awards you with a 20x worth win. For the set of three, your win will be 40x the bet. And the five-set combo comes with the 150x multiplier. Also, if you land several Wild Round triggering combos in one spin, they are summed up. 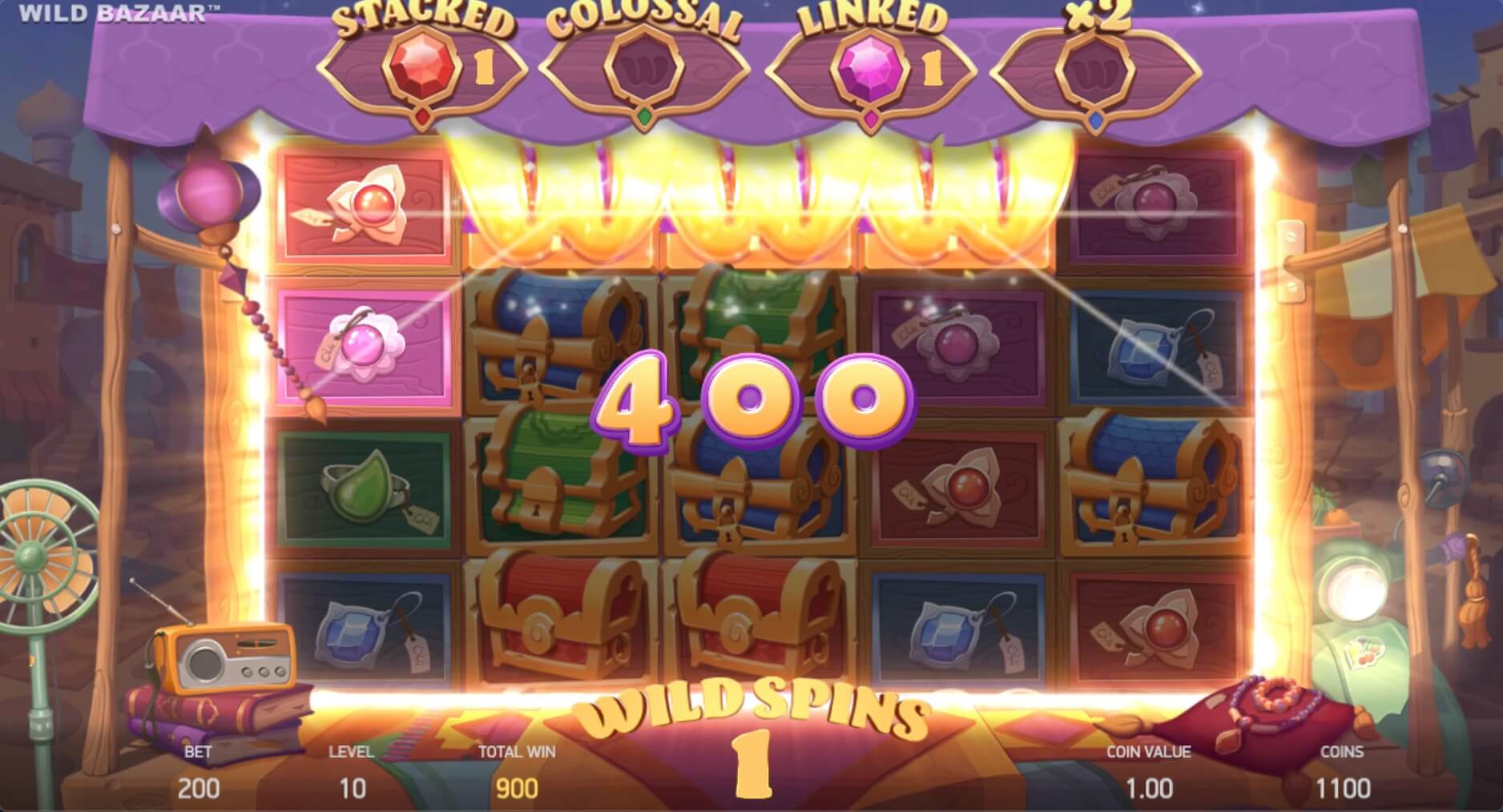 Betting at Wilds Bazaar is a bit of a challenge. The 26 lines are fixed, so you may change the value of the coins and the levels. Coins’ value varies from 0.01 to 2.00 credits, and there are ten betting levels. To figure out how much you win you need to multiply the coin value by the factor from the paytable. And afterwards, multiply the result by the number of the level. Seems a bit confusing, but practice makes perfect. 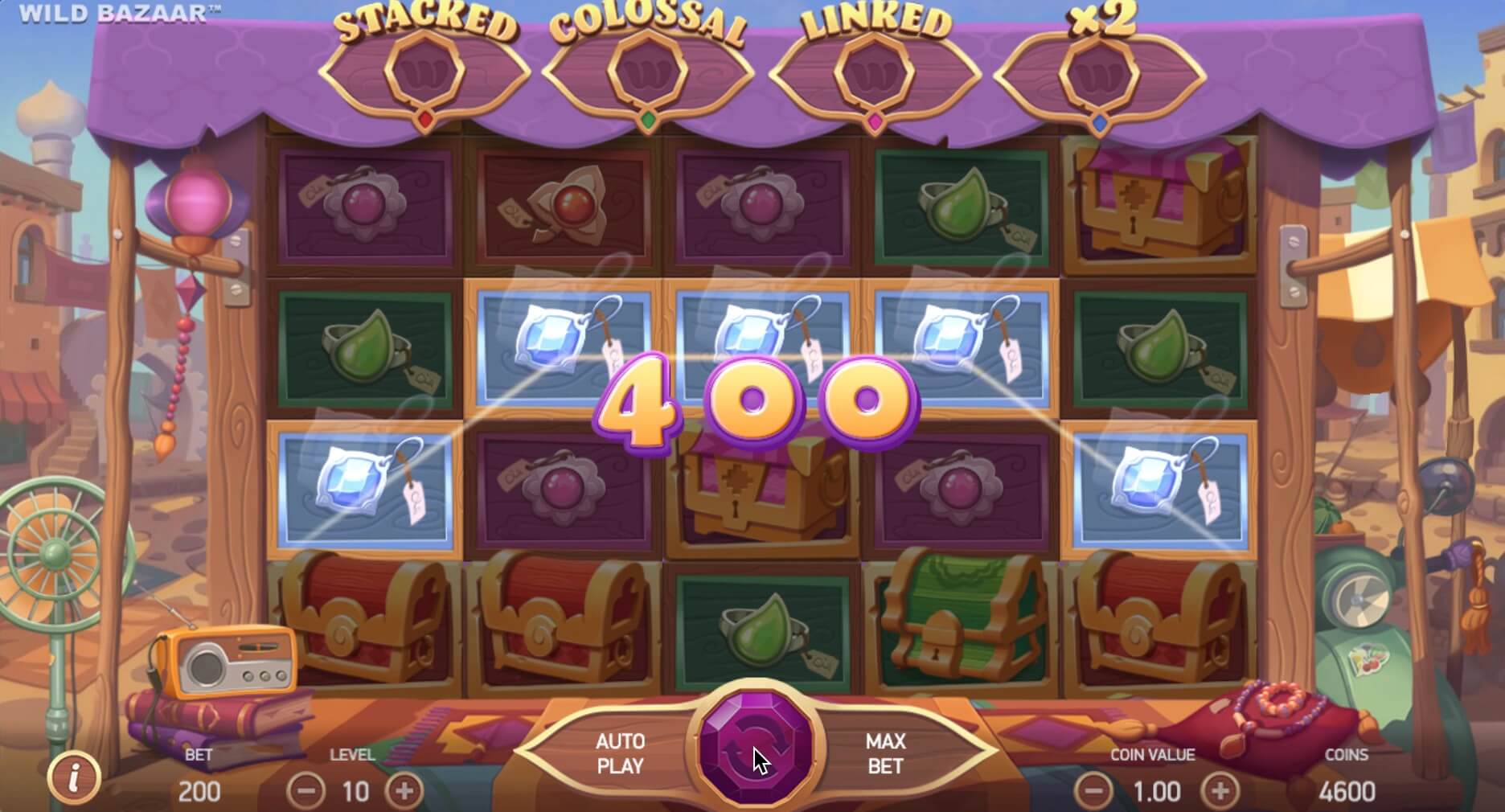 The minimal spin bet here will be 0.20. It’s the coins worth 0.01 at the first level. If you bet the 2.00 credits worth coins at the tenth level, your total bet will be 400.00 credits. In case you get confused, look at the bottom of the reelscreen right under the control panel. There you will see the total bet, the win and the cash in real money, not in coins.

What is the Wilds Bazaar slot all about? It has everything any oriental bazaar offers: the diversity of colors and smells, the extravaganza of spices, fabrics and jewelry. Also, it has the best bargains and deals in town: the wilds’ deals. So pick what your heart desires, spin and win.