Do you know a staple casino slot? The golden-standard for the rest of the suits on the market? Now we do. Meet IGT’s Wheel of Fortune Ultra 5 Reels Slots, a perfect slot with enticing but intuitive gameplay, a plethora of bonus features and purely Vegas pompous glitz.

Never played a slot before? You will know exactly what to do. Wheel of Fortune is designed like a standard 5 reels’ slot with 30 fixed paylines. The layout is typical, but it’s the most popular gameplay among gamblers. The slot features two main game modes: the standard and the bonus one. Let’s deal with them one by one.

The standard gameplay is not called standard for nothing. There is nothing new in it. We have a typical set of paysymbols, 30 lines and the main goal: to hit as many winning combos as possible. All the combinations start on the leftmost reel, and they have to consist of at least three tiles of one kind.

Speaking of tiles, they are stylish imitations of the one-armed bandit paysymbols: fruit and sevens! The Cherry tile is the lowest-paid tile in the game, it’s worth 100x for the set of five. A set of five Oranges or Pears is paid 125x. The tile with Grapes is paid 150x for five. We loved the design of the fruit: they look like they have been decorated with gemstones. They glitter and shine. Striking! 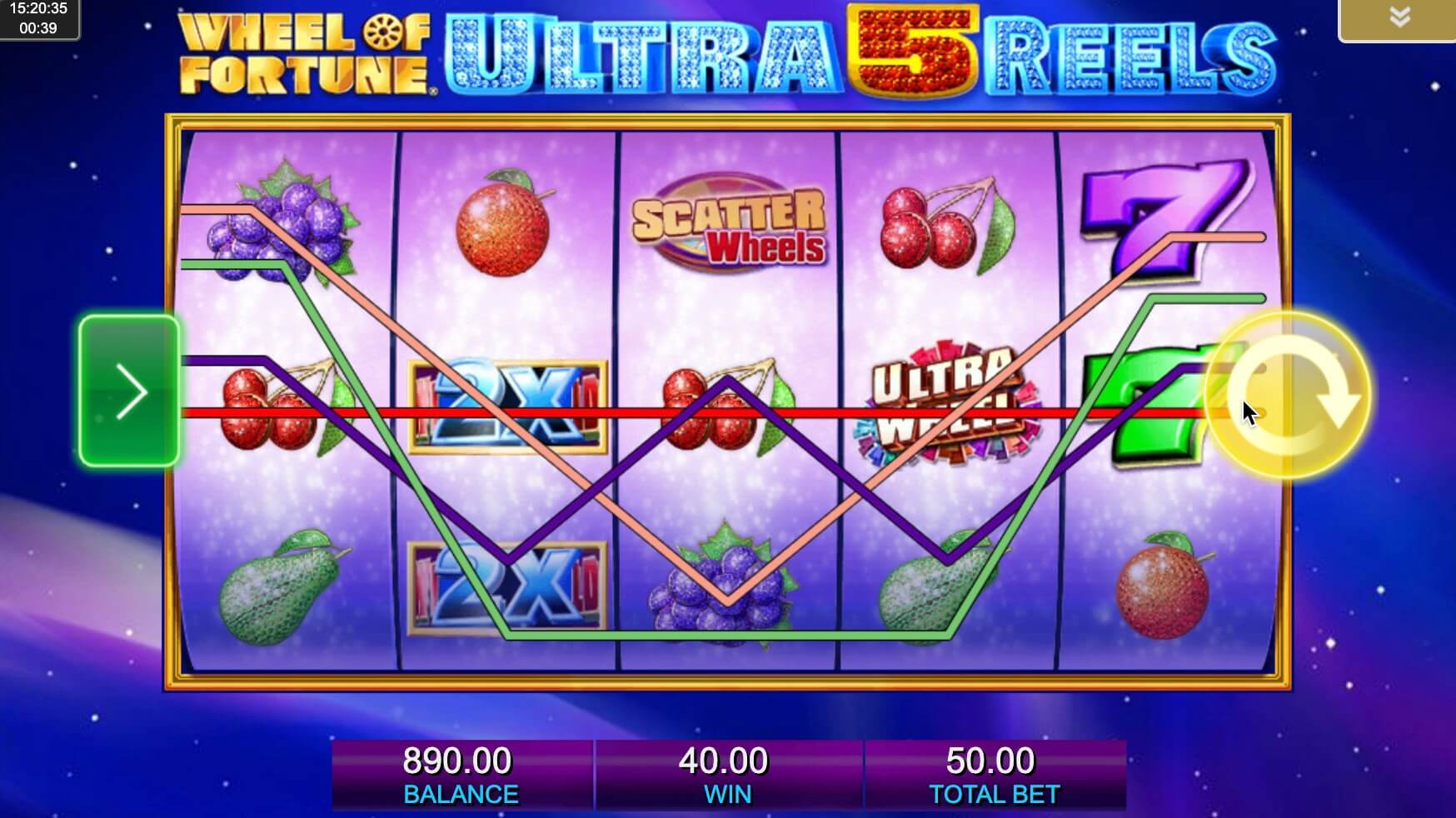 Seven tiles may also form unmatched combos. If you hit at least three non-matching Sevens on one payline, the combo will also be paid. For the set of three, you will get a 5x win, for four Sevens you will get 15x win and for the max combo of five the win will be 75x.

Bonus features are fantastically diverse at the Wheel of Fortune. There are several bonus options. Each one is peculiar and with a huge winning potential. Take replacement scatters, some of them come with multiplying superpowers. Like the 5x multiplier tile. Hit it in a combo on a line and get your line win multiplied five times. It may substitute any tile, but any other scatter. 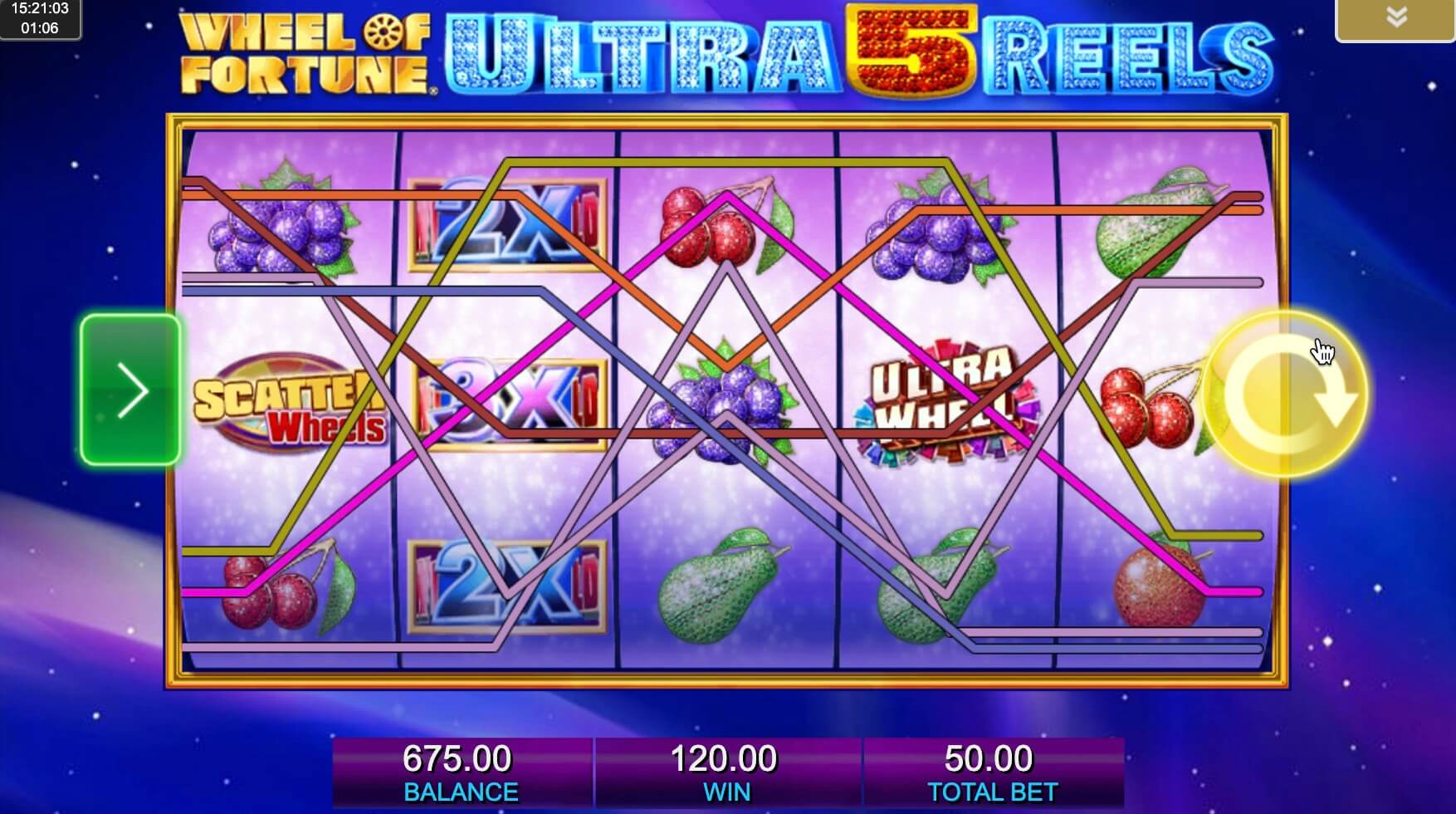 There is one more multiplying scatter, it is a Wild tile. It is a regular tile signed ‘Wild.’ When you hit it in a combo, it transforms into one of the multipliers. There are four options: x5, x4, x3 and x2. So your line win multiplies according to the multiplier revealed by the Wild. The Wild is also a substitute. It may take place of any tile, but other scatters. You may hit several Wilds in one combo. Then the multipliers are summed up. Thus, your total line wager may become 25 times grander in a single spin.

Another bonus tile is the Scatter Wheels. It’s an icon signed ‘Scatter Wheels.’ To initiate the self-titled bonus round, hit at least three scatters anywhere on the reels. During the bonus play, all the triggering tiles turn into Wheels of Fortune and start spinning. The wins from them will be summed up and multiplied by the coin’s value. 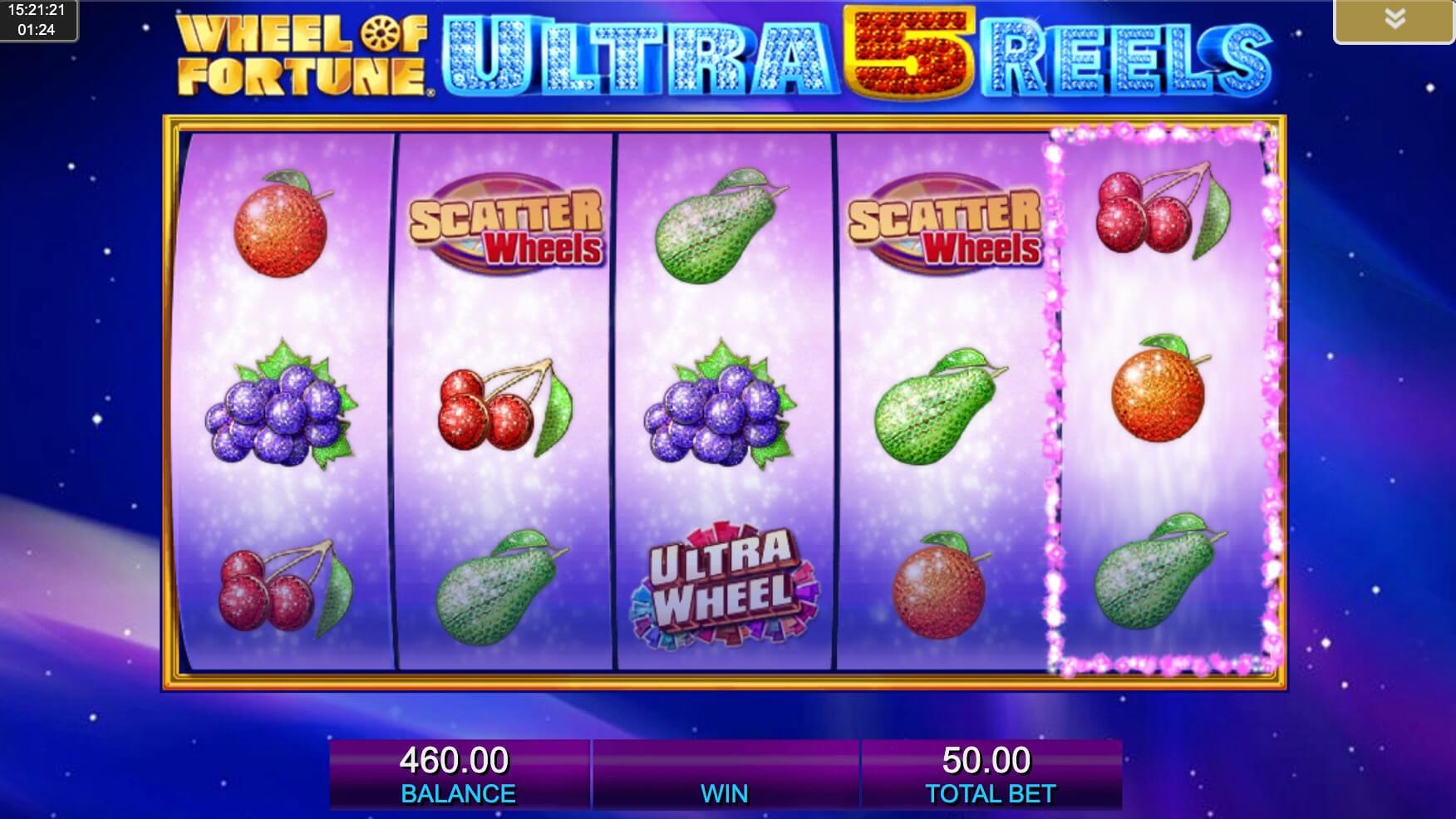 And finally. We can’t but mention The Ultra Wheel Bonus feature. Once again the triggering tile for the feature is a tile with its name on it. To initiate the bonus play, hit three of those tiles on the reels. Keeping in mind that they appear only on the 2nd, 3rd and 4th reels. First, you would have to spin three bonus wheels to choose the active wheel or wheels, and the multiplier that they will have, if any.

The first wheel comes with values from 300 to 10,000 credits. The values on the second reel go from 150 to 2,500. And on the third wheel, the values are from 100 to 500. Each wheel comes with multipliers: x2, x3, x4, x5 or x10. If you hit a multiplier at a particular wheel, its value will be indicated by the pointer. You may activate two or all three wheels at once. Each wheel may come with a multiplier. So the tops wins for this bonus feature is 10,000x the coins value. 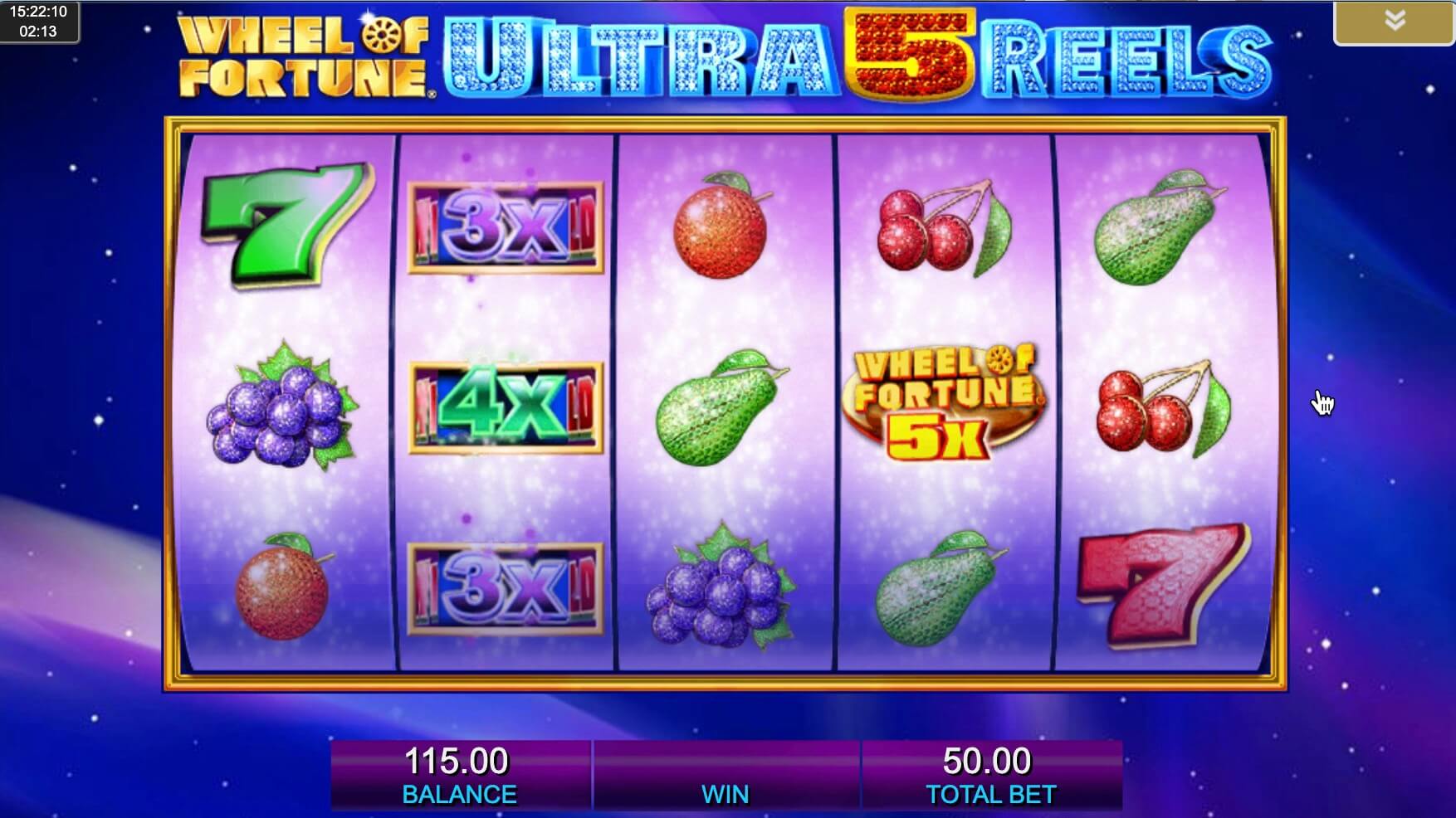 Betting is peculiar here, though the interface is fantastic. Its layout is so simple and clear, a toddler could bet here. On the left side of the screen is the betting button. It looks like an arrow. Press it and the pop up betting window would open. Here you can fix the spin bet. Remember, you can’t change the number of lines or the number of coins staked per one spin. There are 50 coins staked per spin, by the way.

The bets are pretty solid, don’t you think? Highrollers would be mad about such numbers. The value of the coin is important, better keep it in mind. To figure out your win, you have to multiply the coin value by the factor from a paytable. 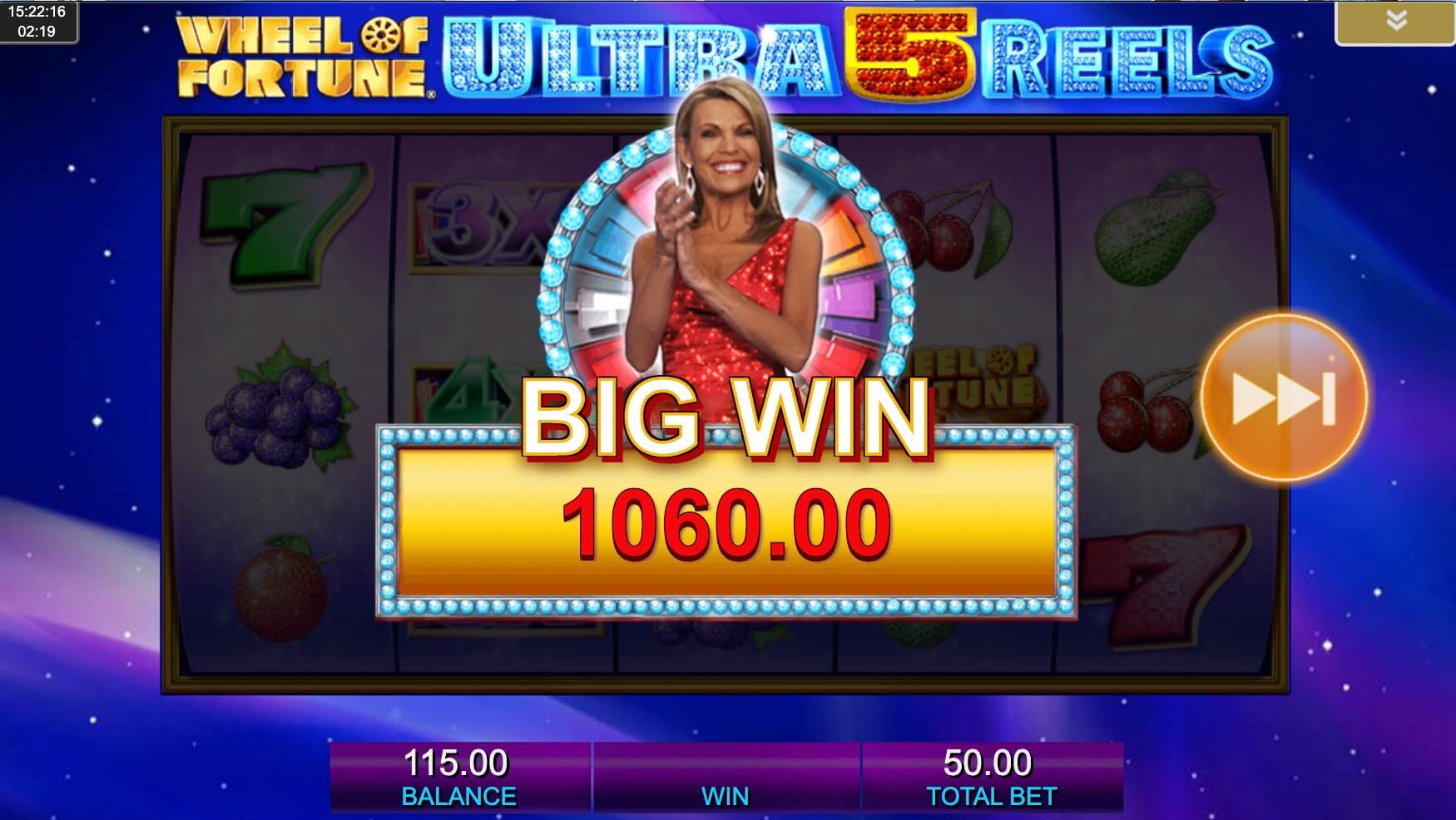 And so it is official: the Wheel of Fortune is simply perfect. No getting around it, actually. The gameplay is outstanding; the wins are fantastic and the overall concept simply rocks. True, the graphics and animation are quite plain.

They could have been more sophisticated and the design may seem way too flashy with those gemstones decorations and gilded grids. But those are so fantastically déjà vu. Old-school punters know exactly what we mean. So don’t jump to any assumptions or judgements, just spin, then spin again and enjoy!