How many slots do you know themed after the Roman Empire history? Not much, actually. And there are even less good ones. Why? Is it the topic that is not interesting anymore? Probably not. It’s the slots that cannot meet gamblers expectations. But not anymore. NetEnt nailed it by introducing Victorious. So now, if you want to spin some Roman time war-themed machine, we know just the right game for you.

Let’s start with the basics: how to win at Victorious? Usually, we’d give you some basic information on the number of reels and lines and whether the latter are fixed or not. Won’t work here. Victorious has classic 5 reels. Apart from the reels there is nothing classic about it as the slot features no paylines.

To form a combination all you need is to land at least three identical tiles on the adjacent reels. The stop is not essential here. Thus, you get about 243 ways to win this game. There is only one rule: all the combos start on the leftmost reel. 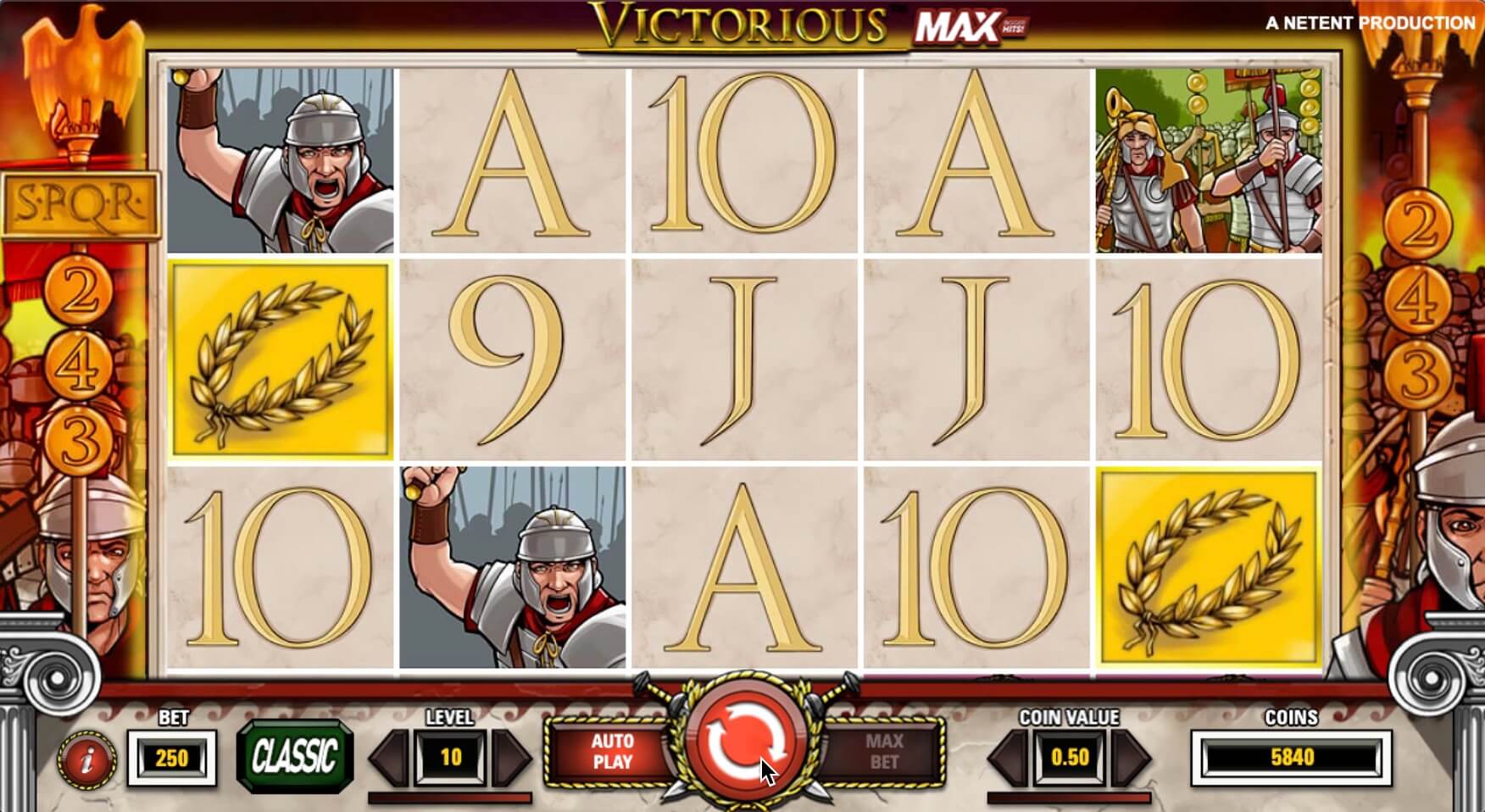 Victorious’ tiles come in two categories. First, is the lower paid card-borrowed icons. The slot features six of those. Five 10s or 9s are worth 80x. The same number of Jacks and Queens will be paid 100x. Kings are worth 150x for the set of five, while the Aces are paid 200 times for the same combination.

The awesome thing about these low-hand icons is that the lowest paid two: the 9 and the 10 have minimal combinations worth only 2 tiles in a row. The payouts for them are tiny, but at least you get your wager back. 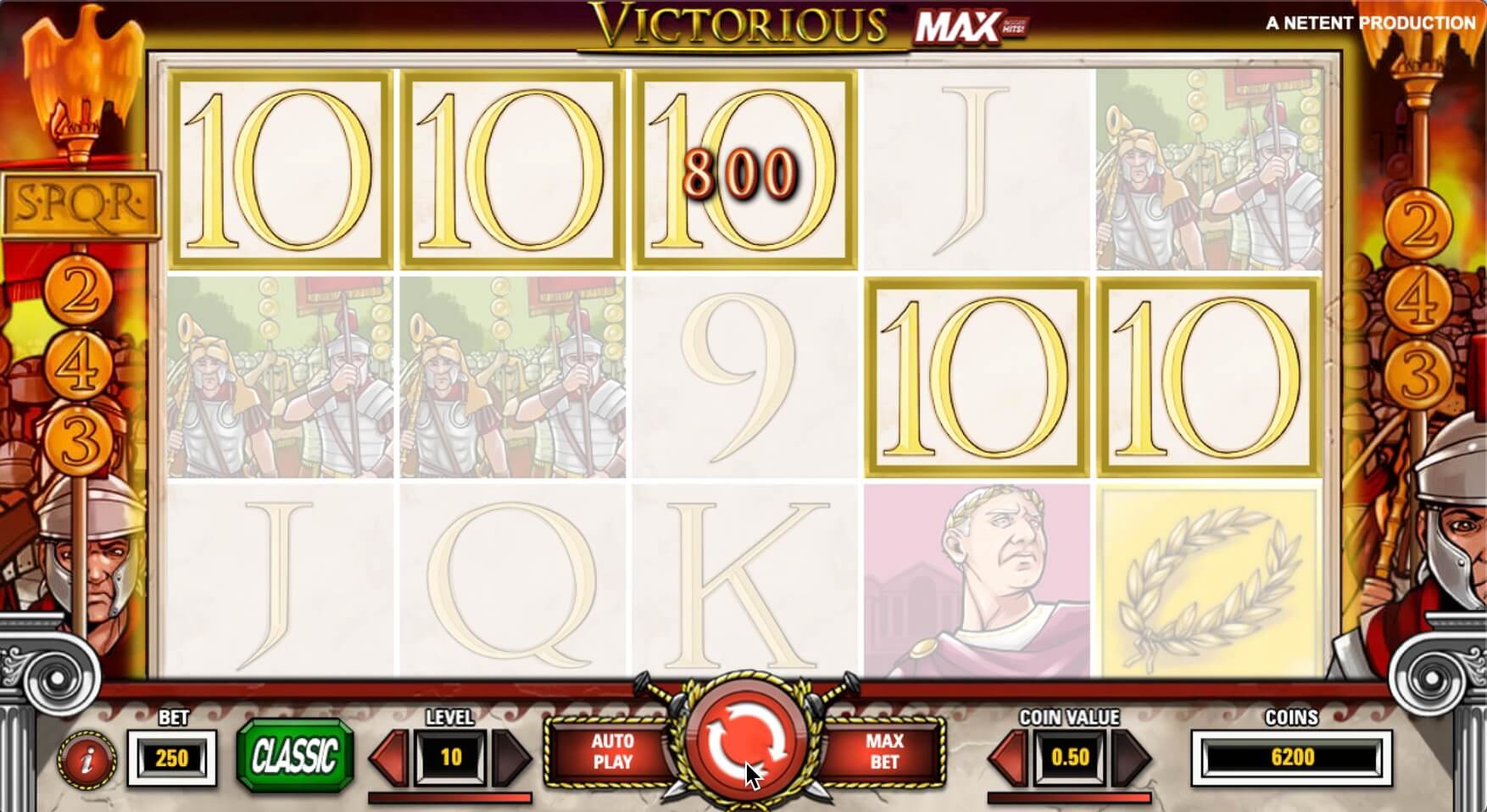 Four other tiles have been designed especially for this slot. The one with Roman Troops is paid 400 times for five. A Warrior with a Sword is paid 500x for five. The tile with a Roman General will be paid 1000x for the maximum combo. And the highest paid tile is the one with the Caesar. Five of those will be paid 1,500 times.

Figuring out how much you win might be difficult if you have never played any 243-ways to win slots. The trick is to keep in mind the coin value. If the paytable states that this combo is paid 3 just multiply the value of one coin by this factor and this will be your win. But only if you have bet at level 1. Otherwise, your paytable factor has to be multiplied not only by the coin value but by the number of levels as well. 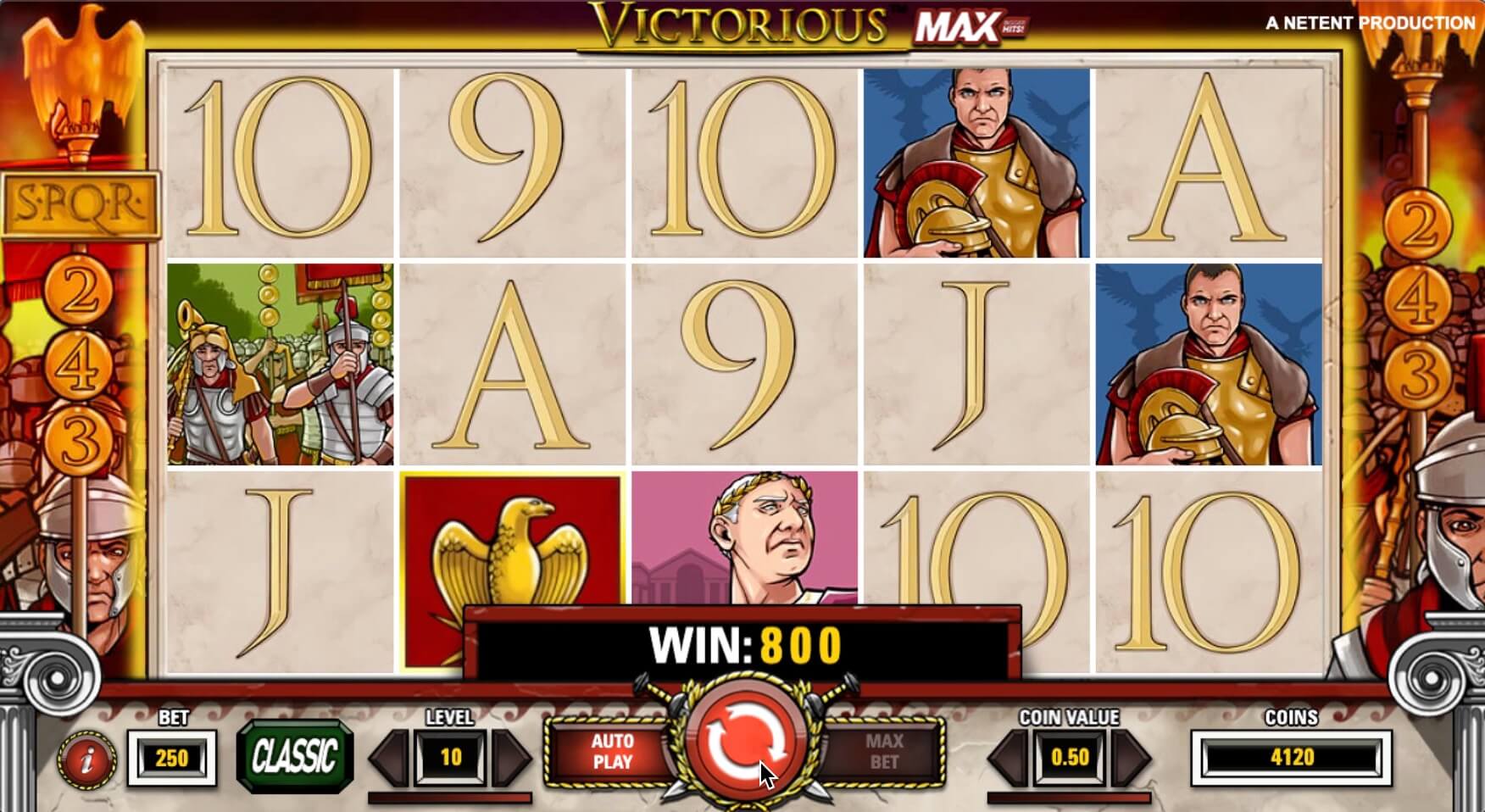 The Victorious slot features 2 special bonus features. Each comes with its unique paysymbol. Look out for the Laurel Wreath tile. It’s a free spin icon. Hit at least three wilds and get yourself a good share of free games. The trick is that they all should fall on the adjacent reels, starting from the leftmost one.

For the three of a kind, you will get 15 free spins, for the set of four you will be awarded with 20 spins, and the maximum combo of five brings you as many as 25 spins on the house. The Laurel Wreath scatters may form combos just like any regular tile. Also, free spin wins come with a 3x multiplier.

Another bonus feature of the slot is the Wild. It’s a tile with a golden Eagle. It appears on the second and the fourth reels only. As usual, its main task is to replace missing symbols from the combinations. 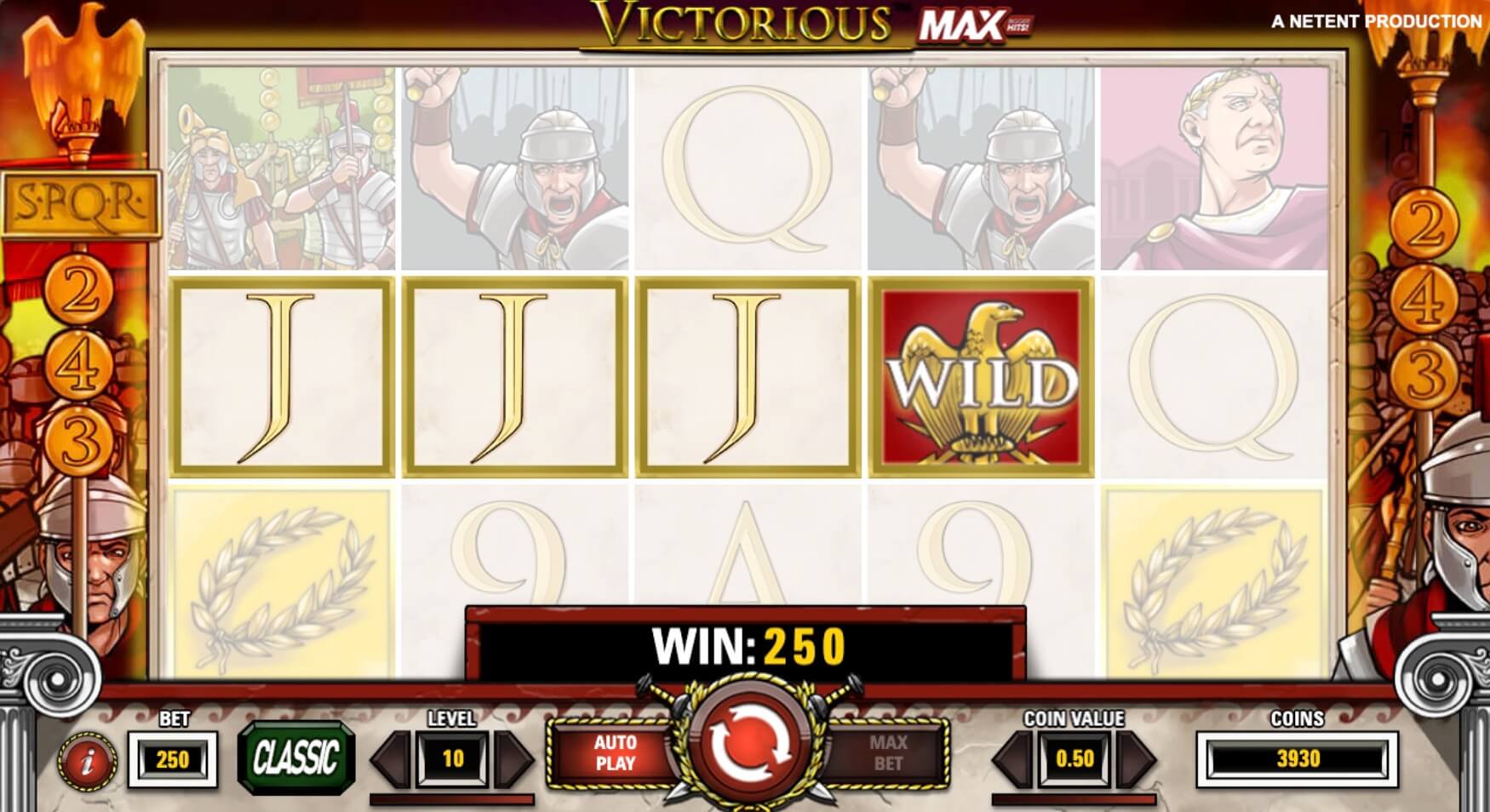 Betting is a bit unusual here, at Victorious. No wonder, as there are no lines. To make a bet, use the buttons and widgets at the bottom of the screen. First, set the coin value. It may vary from 0.01 to 0.50. Then you need to set the level. There are 10 betting levels in this game. On each level you may bet 25 coins. Thus, you are able to bet from 25 to 250 coins per spin.

So the minimal bet will be 0.25 while the maximum is 125.00. Also, there is an Autospin button. It allows to set the Autospin mode. You may choose the number of auto pins and set the spinning to stop if you lose or win a certain amount of credits. Bet max button also might be helpful: it allows to make the maximum wager at the given value of one coin.

The slots featuring not 20 or 50 but 243 ways to win are fascinating. They always attract attention and not without a reason. Their gameplay and payouts stand out against the rest of the games. Wish to experience some fascinating gameplay? Enjoy the Ancient Rome themed visuals? Then Victorious is just down your alley!