Roses are red, Violets are blue… You know the drill, pals.

What do you expect from a slot named Valentine’s Victory? Not much, right? Probably you expect some cheesy ambiance, filled with hearts, ribbons and red roses. If truth be told, we expected the same.

As it turned out, Valentine’s Victory looks just like we expected. It is in fact full of hearts and candies and red roses and damn cupids. But underneath all this ridiculous mushy extravaganza, this slot is absolutely unique. Trust us, you have never seen anything like it.

Valentine’s Victory looks pretty ordinary: 5 reels and 3 lines. The slot’s design and the colors are unique, though. We have never seen such a vivid blue sky-like backdrop. It’s so bright it’s actually annoying. The tiles are even worse: hearts of all sorts. 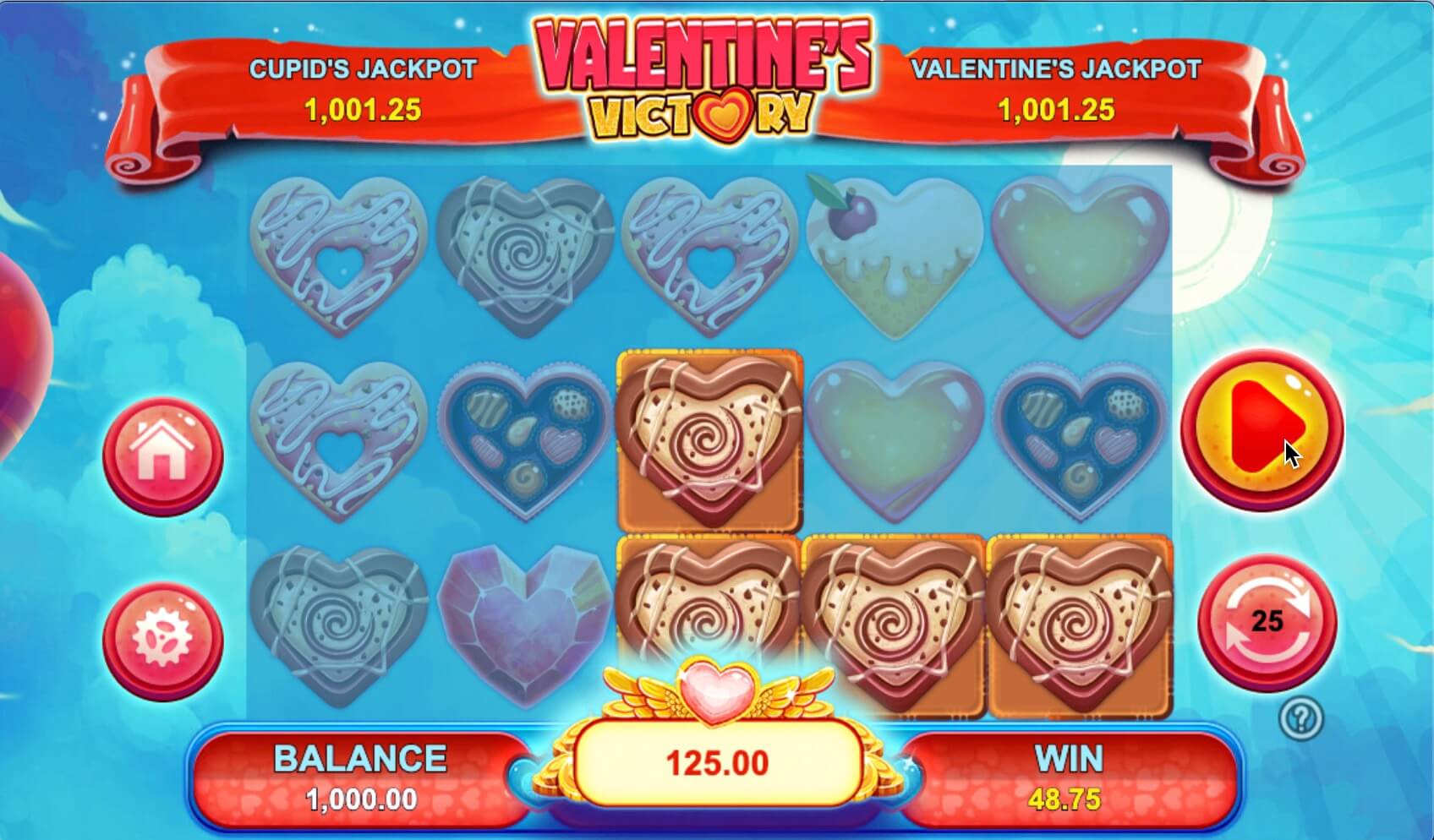 Heart-shaped muffins with sprinkles, icing and whipped cream. Nope, no kidding! Check it out yourselves. Take the most annoying Valentine’s Day hallmarks: hearts, supermarket flowers and pastry, and here you go — the Valentine’s Victory design is ready!

What makes this slot so unusual apart from a crappy design, you might wonder! It has no lines. Literally! No lines. And not in the 243-ways-to-win no lines kinda way. There are no paylines at all. How are we supposed to win here?

All the slot’s tiles may form different icon combinations. Those look surprisingly like Tetris figurines, tetrominoes as they are officially called. If you remember Tetris, you know what we are talking about. 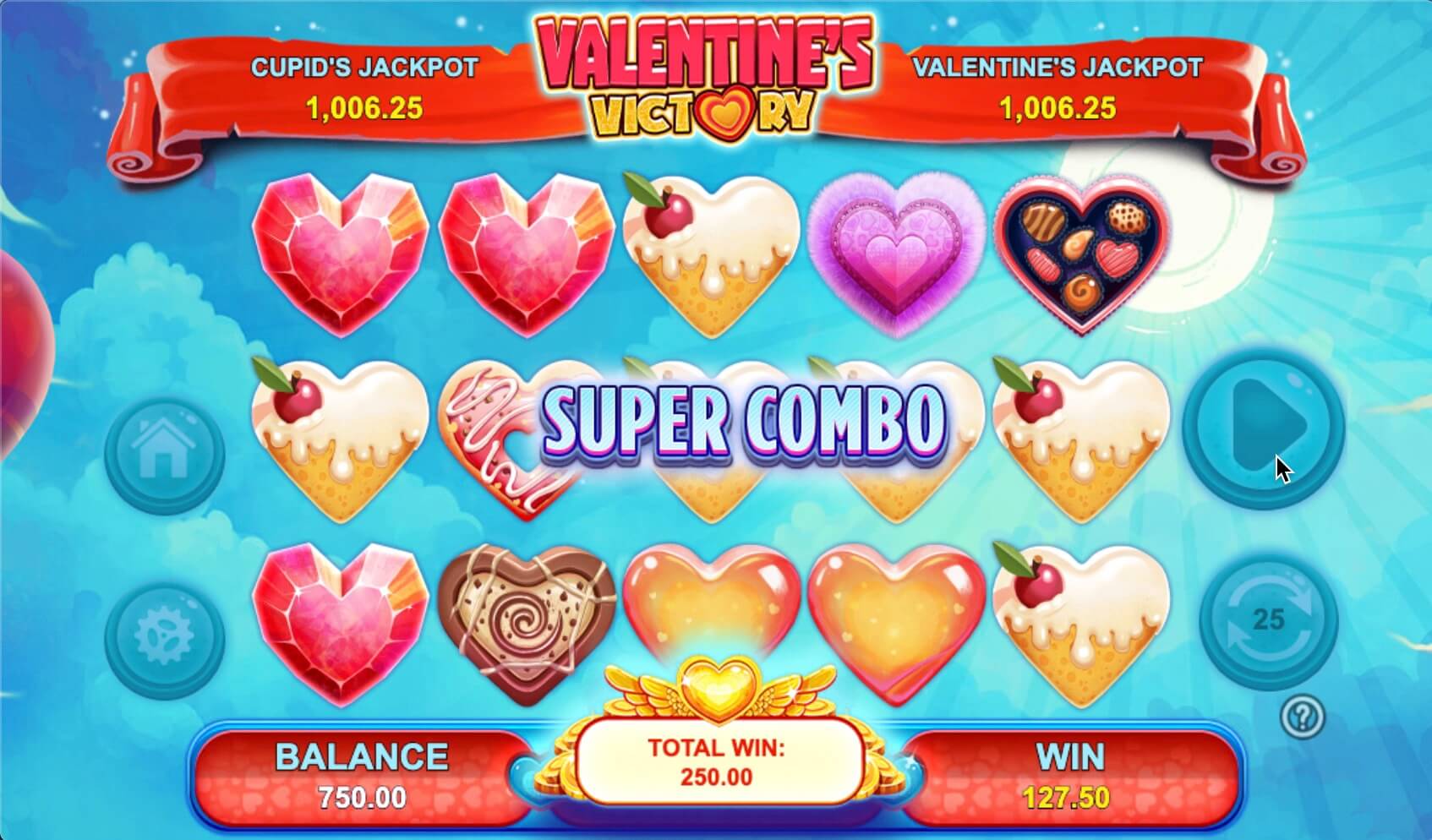 There is a capital ‘I’ shape that looks like a stick. It consists of four stops in a row. Another shape is a capital ‘S’ combo, it consists of 2 stops stalked horizontally like a domino. Otherwise, it’s called ‘snake’. There is also a checkered five-stops figure that looks like a cross. There was no such figure in Tetris as far as we remember. We will call it ‘X.’ One more shape is an upside down capital ‘T’ made of 4 icons.

The fifth and the last shape is the capital ‘J’ one. It occupies 4 stops. Some people used to call it the ‘left gun.’ Like in Tetris, those figures are hit in any direction. You are obviously not able to twist them around to suit your needs the most. Sadly!

As you have already realized, the paytable looks highly odd. Here, you are paid for the shapes, not sequences. Each tile in different combos is paid differently. There are seven tiles in the slot. All of them are heart-shaped and represent different Valentine’s Day tokens. 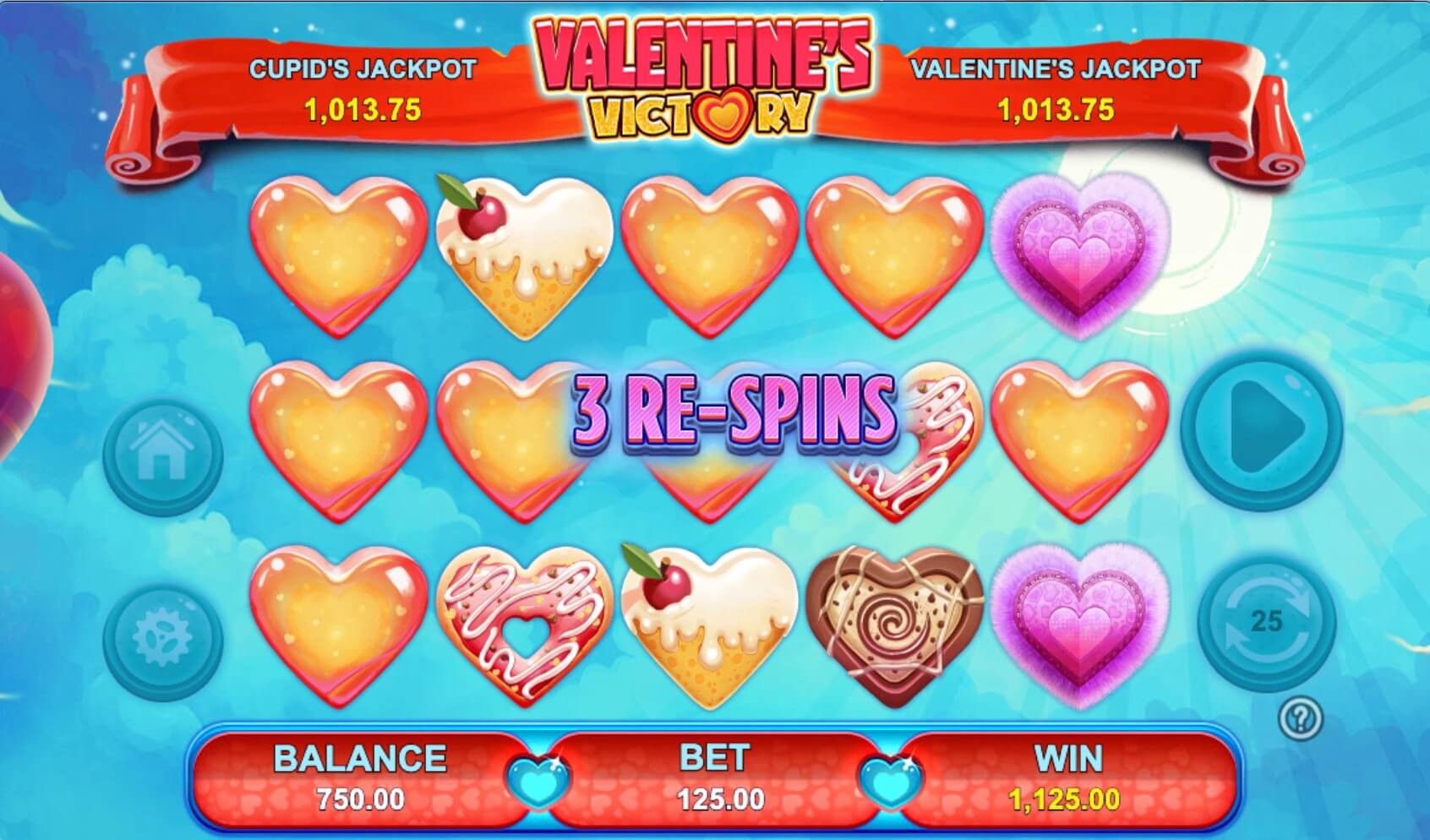 Apart from the regular gameplay, there are also several bonus perks. They are activated not by the combos or certain tiles but by the combinations of several shapes. If you hit two shapes in one spin, you will receive one re-spin for free. 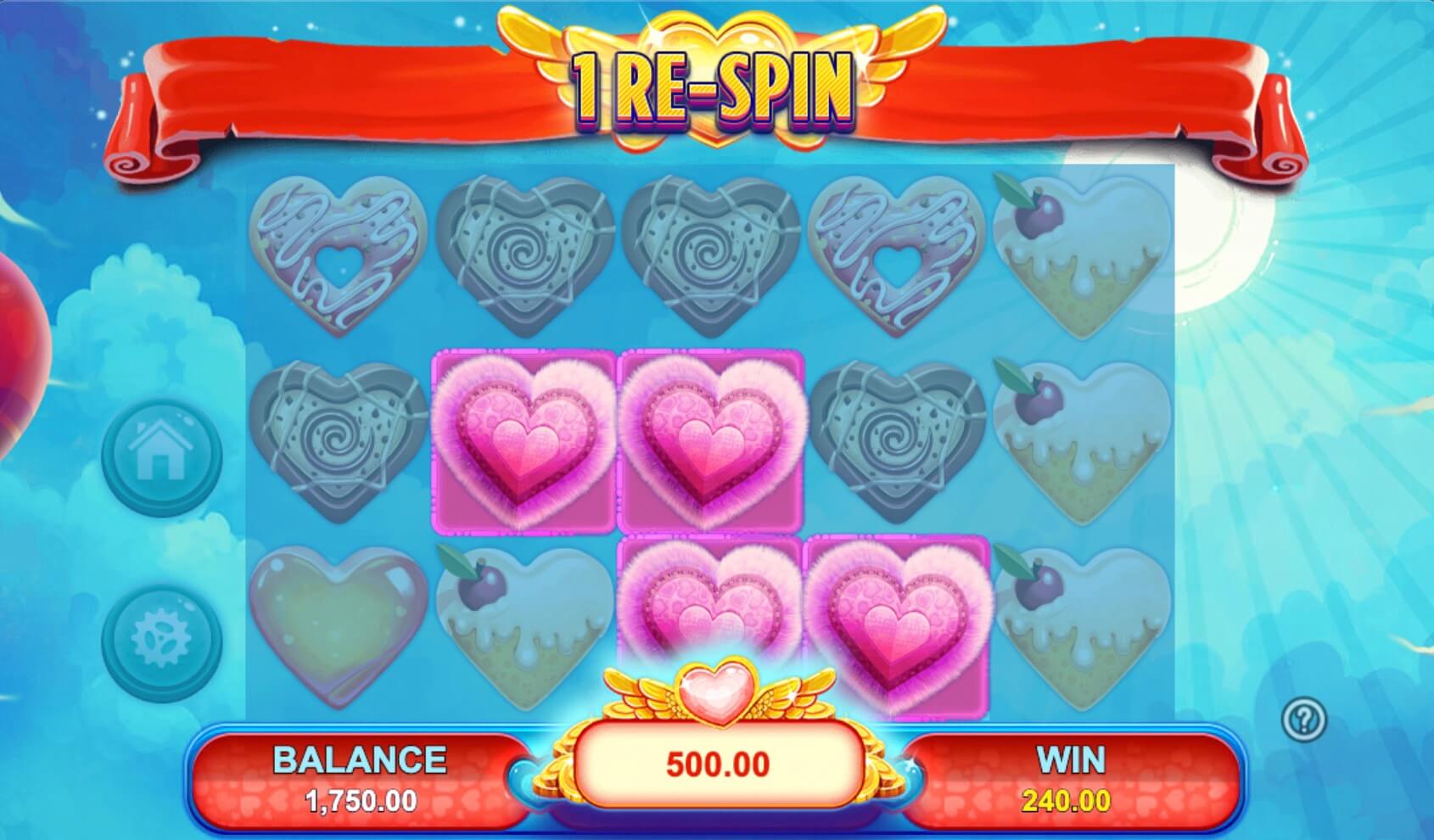 Hit a MegaCombo of three shapes and get 2 re-spins on the house. But that’s not all! There is also the SuperMegaCombo of four or more shapes hit in one spin. It is rewarded with 3 free re-spins.

Also, the Valentine’s Victory slot features a bonus round. It’s a regular pick-me game. To trigger it, hit two Pick-me tiles on the first and the fifth reels simultaneously at one spin. It doesn’t matter which stop they appear on.

During the pick-me game, you will be offered to pick one of the symbols. The prize is the multiplier for the total bet. Behind each pick-me icon there are different multipliers, so choose wisely. 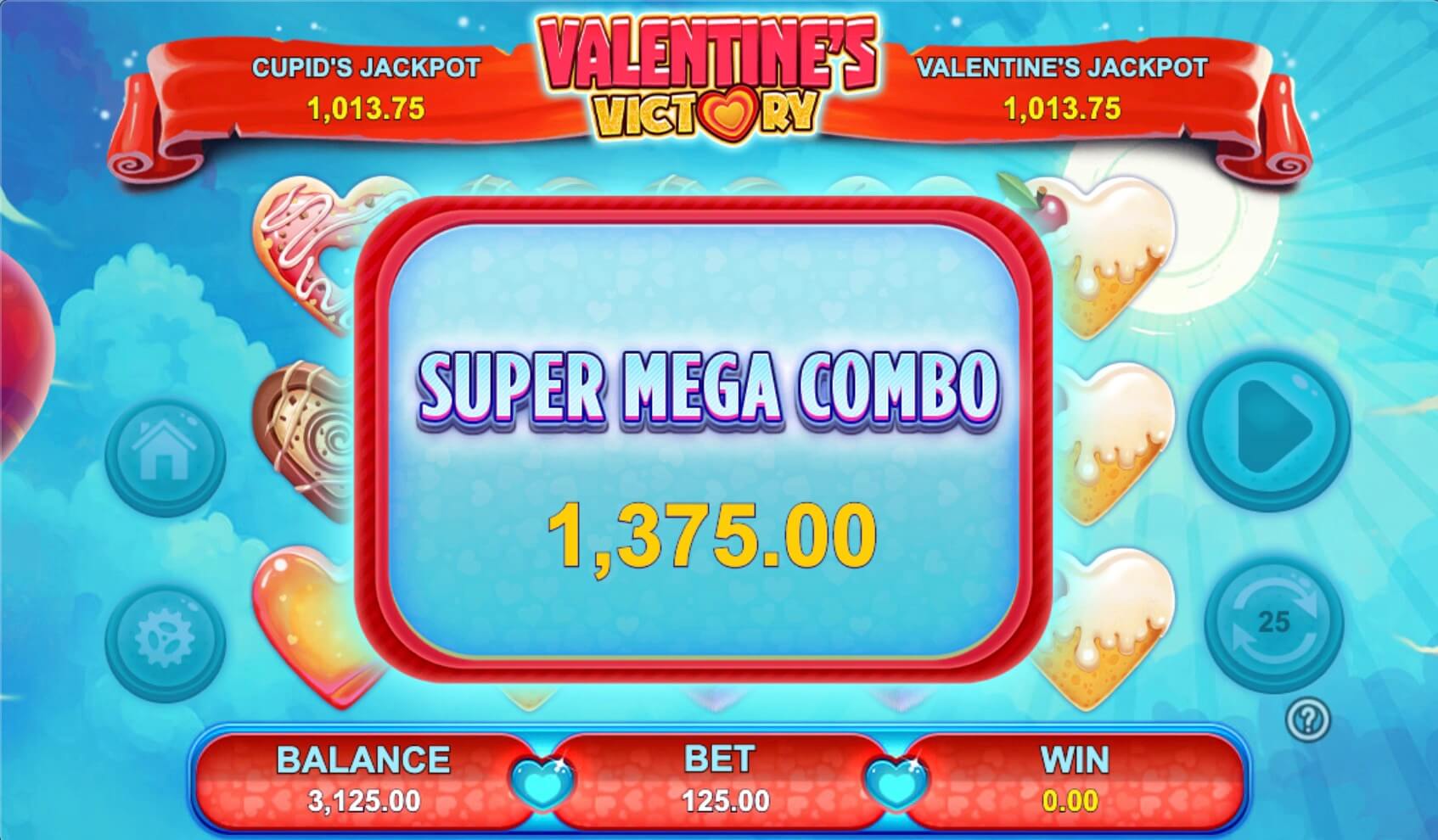 The best bonus perk the slot offers is the progressive jackpot, no doubt about that. There are actually two progressive pots you may hit: Valentine’s Jackpot and Cupid’s Jackpot. At the moment they are worth over 37K. Both jackpots are hit randomly, but the size of your wager influences your chances to win the prize.

As for the player’s interface, it’s absolutely basic. There are only a couple of buttons and widgets: the total credit, the total wager, and the spin button. To set the bet, you have to click on the Menu button. The total bet varies from 0.25 to 500.00 credits. There is also a possibility to activate automatic spins. That is also done at the Menu section of the game.

Haven’t we told you at the beginning, you have never played anything like this slot?! Now you see why? A totally unusual gameplay, no paylines, weird combos, two progressives pots to win.

Enjoy all of those big-time as long as you are fine with the cheesy settings and have a normal blood sugar! Well, even if you are not, try getting used to the design and consult your physician. It’s going to be a mind-blowing experience. You can have our word on it.

Monopoly Bring the House Down