Your Bankroll is Under Construction!

Under Construction is one of the greatest interactive video slots in the biz. And the most unusual too. How often have you come across a heavy construction-themed slot? The theme is surprising, but it’s also fun. It reminds of long-gone childhood days when some kids wanted to be astronauts, others dreamt of being a pilot, and there was always some kid who wanted to take after his dad and become an engineer or constructor. Maybe that was your case? Let’s figure the slot out.

It has been introduced by the NetEnt Company. Basically, Under Construction is a classic five-reeler with thirty fixed paylines. It comes with bonus features and progressives as well. The rules are pretty much ordinary: to win, you have to hit a winning combo. What is a winning combo? It’s a set of identical tiles on the line you have pre-chosen. The combo starts on the leftmost reel. Usually, the combo consists of at least three tiles of one kind, but sometimes there are some exceptions. We’ll deal with them as we proceed. 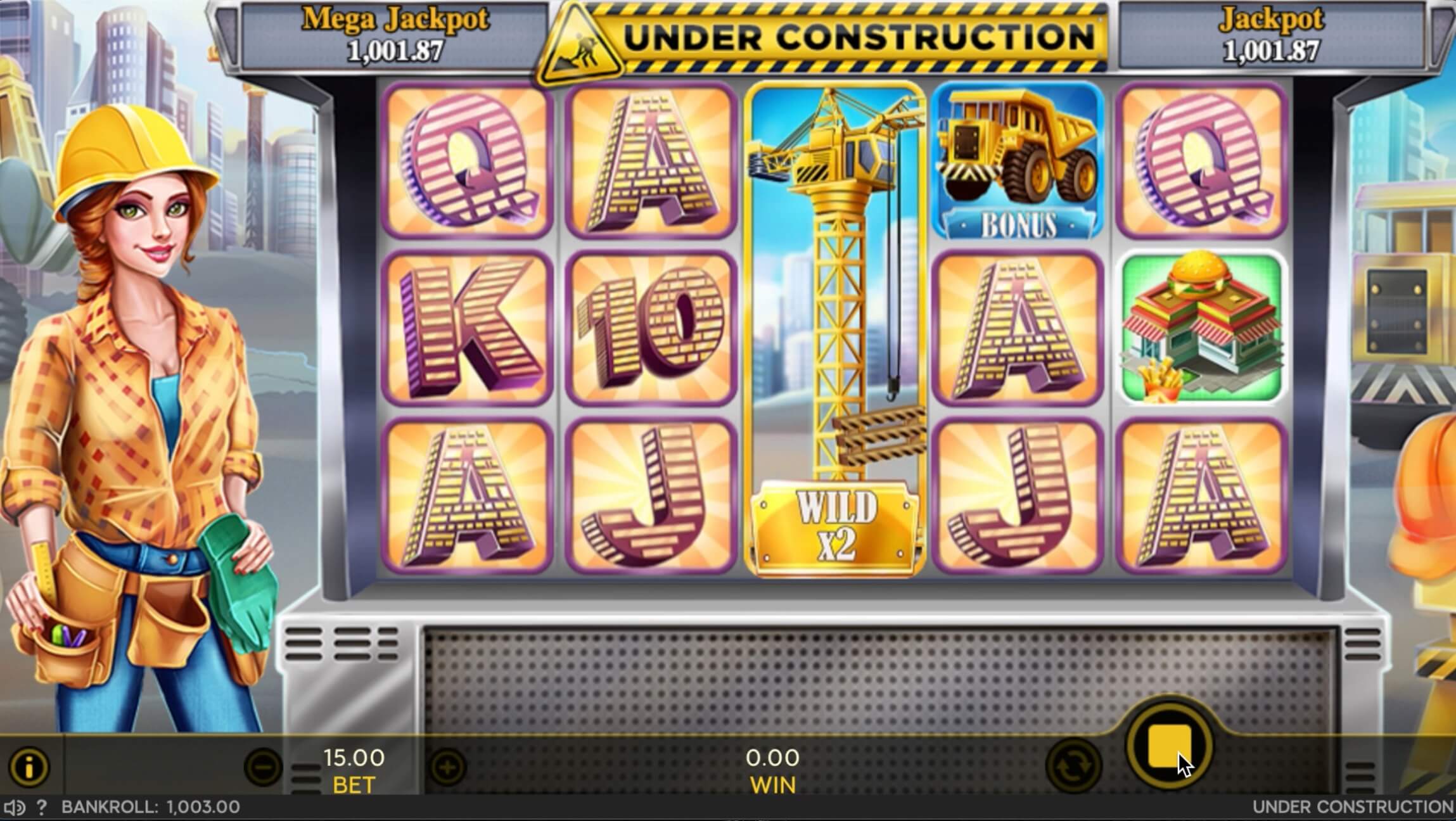 There are ten regular tiles. Five of those are borrowed from cards. So, here we have Aces, Kings, Queens, Jacks and the 10s. All considered the low hand tiles in the game. The highest-paid symbol here is, obviously, the Ace. It’s worth 200 times the line wager for the set of five. The identical number of the 10s will raise your line bet only 50 times. As for the high hand icons, here, they are all sorts of buildings.

They actually look a bit cartoonish but cute, like they belong to some PC simulator game where you have to create and run a town or an empire. The biggest combo of five blue buildings that resemble a city hall of some sort will pay 2,500 times the line wager. 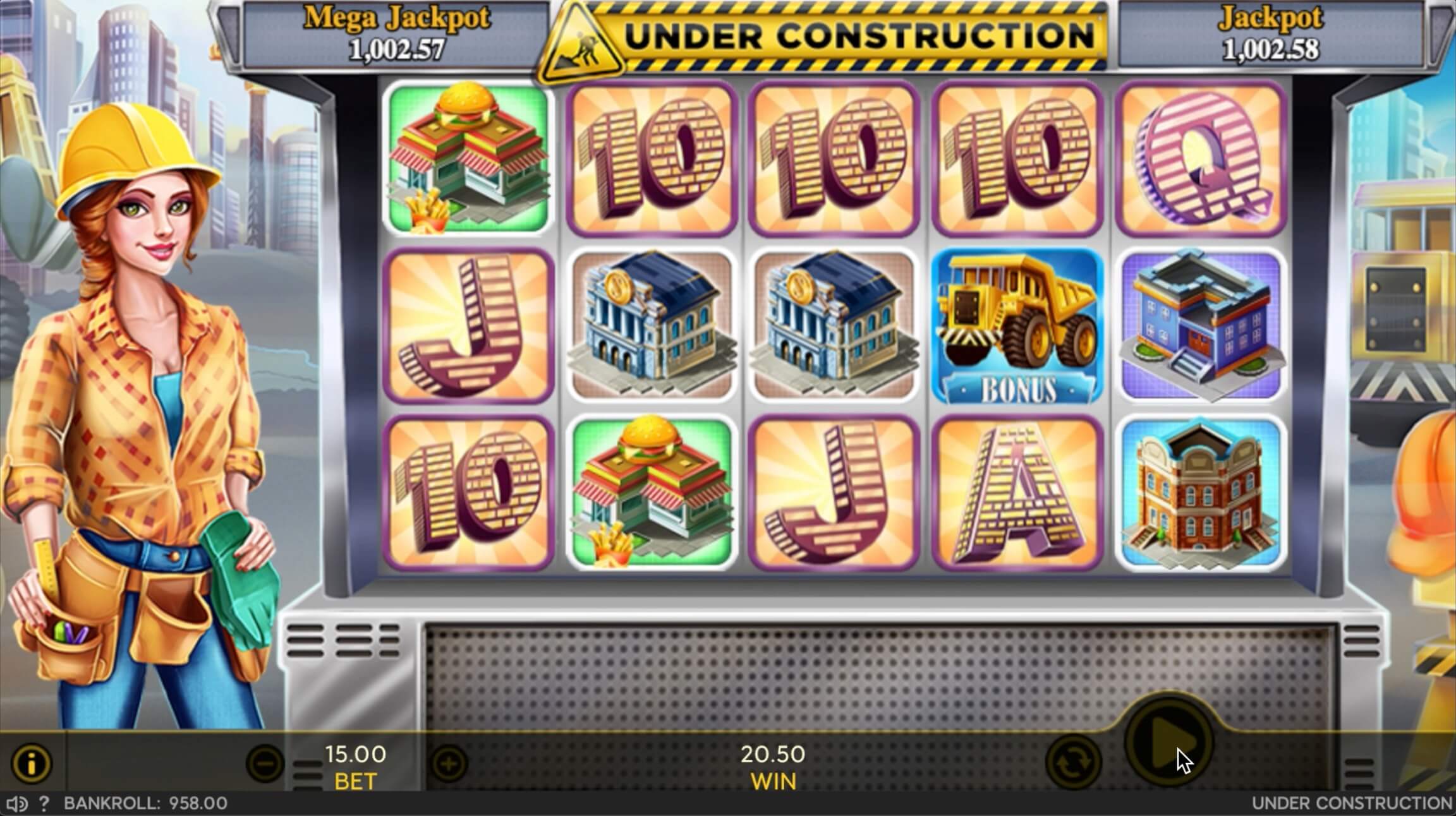 Apart from the regular paysymbols there are bonus feature icons. Unlike the regular tiles that are paid from left to right only, bonus tiles are paid in any direction. Also, they are loaded with fancy perks big time, so better watch out for those.

First, let’s take a look at the Wild. The wild tile is an icon with a construction crane. It’s signed ‘Wild’. Usually, the wild is a replacement tile: it replaces a tile to link the icons in a combo. It may take the place of any tile but the scatter and the bonus. 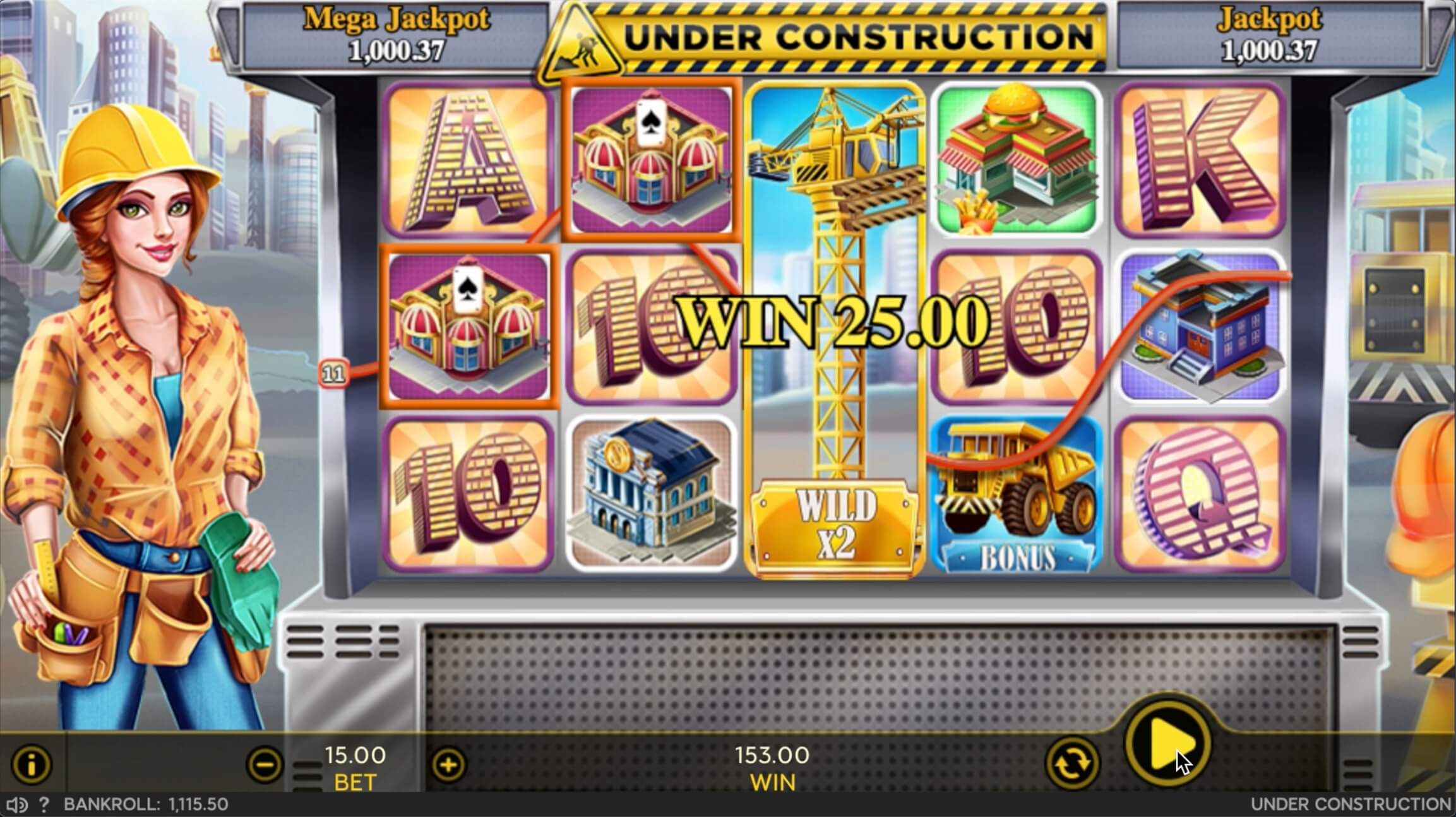 But at Under Construction the Wild is more than that! If the wild hits the mid-reel, or you may call it the third reel, it expands to occupy the entire reel. Imagine your odds to form a winning combo if you get not one wild but three of them! What’s more, the wins made with the Expanding Wild are doubled.

But the wild is not only a replacement bonus perk it’s also a paysymbol by itself. Though there is only one combination with wilds possible at this machine: the combo of five. This solid combination gets your line bet multiplied 10,000 times. There is only one rub, the 5-wild-combo wins are never doubled with the expanding wild. It’s the only exception. 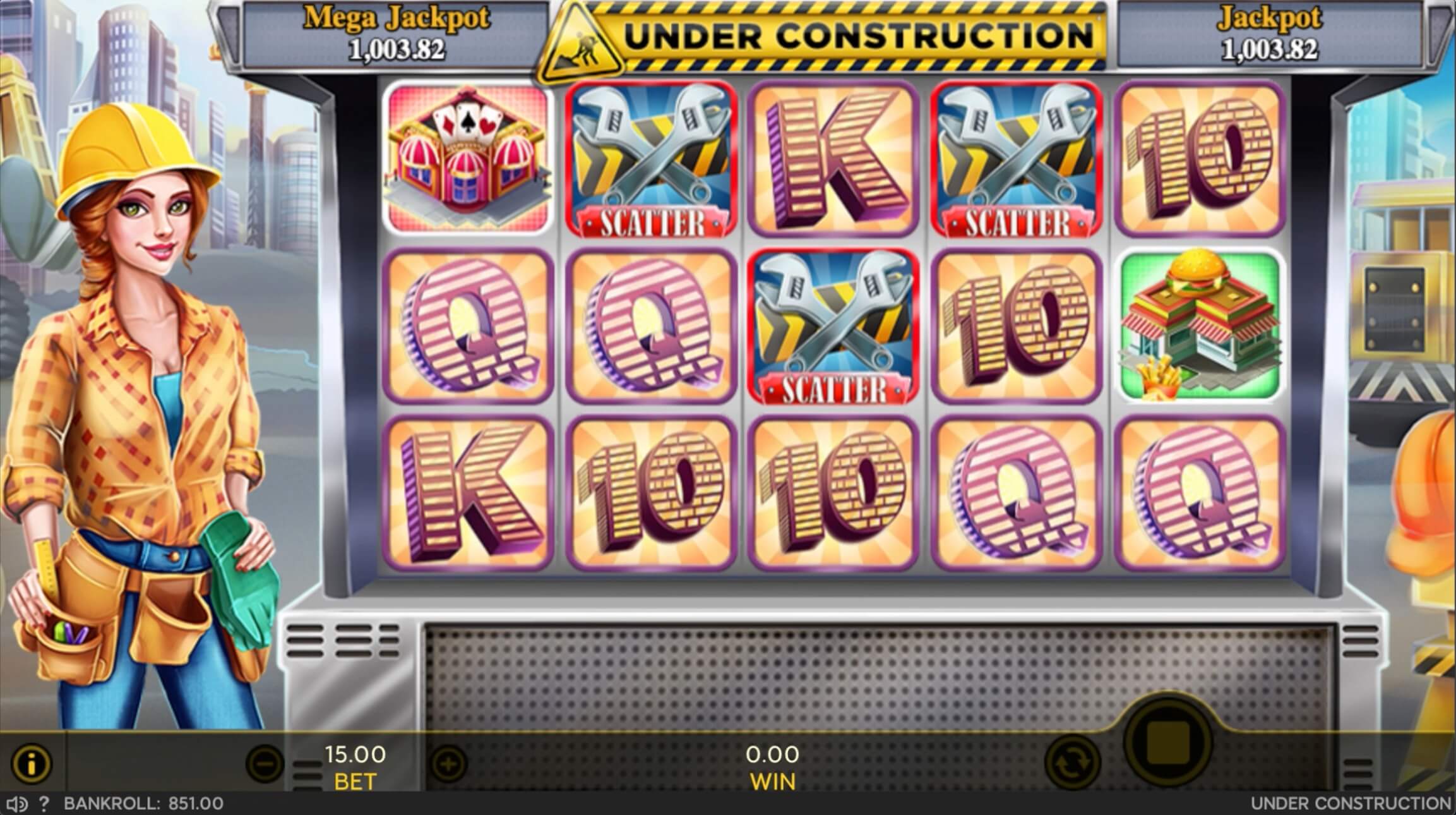 Another tile is a Free Spin scatter. It looks like a tile with two crossed wrenches. It is signed ‘Scatter’. Enjoy spinning on the house, then look out for this one. Hit three to get 10 spins. Four of the kind will award you with 20 free games. If you are lucky to get five scatters then indulge yourself in 30 games completely free of charge. Remember, you wouldn’t be able to change your bet during free spins.

It stays fixed from the last spin of the regular mode. You may retrigger the Free Games mode while free-spinning, though. Which is awesome. 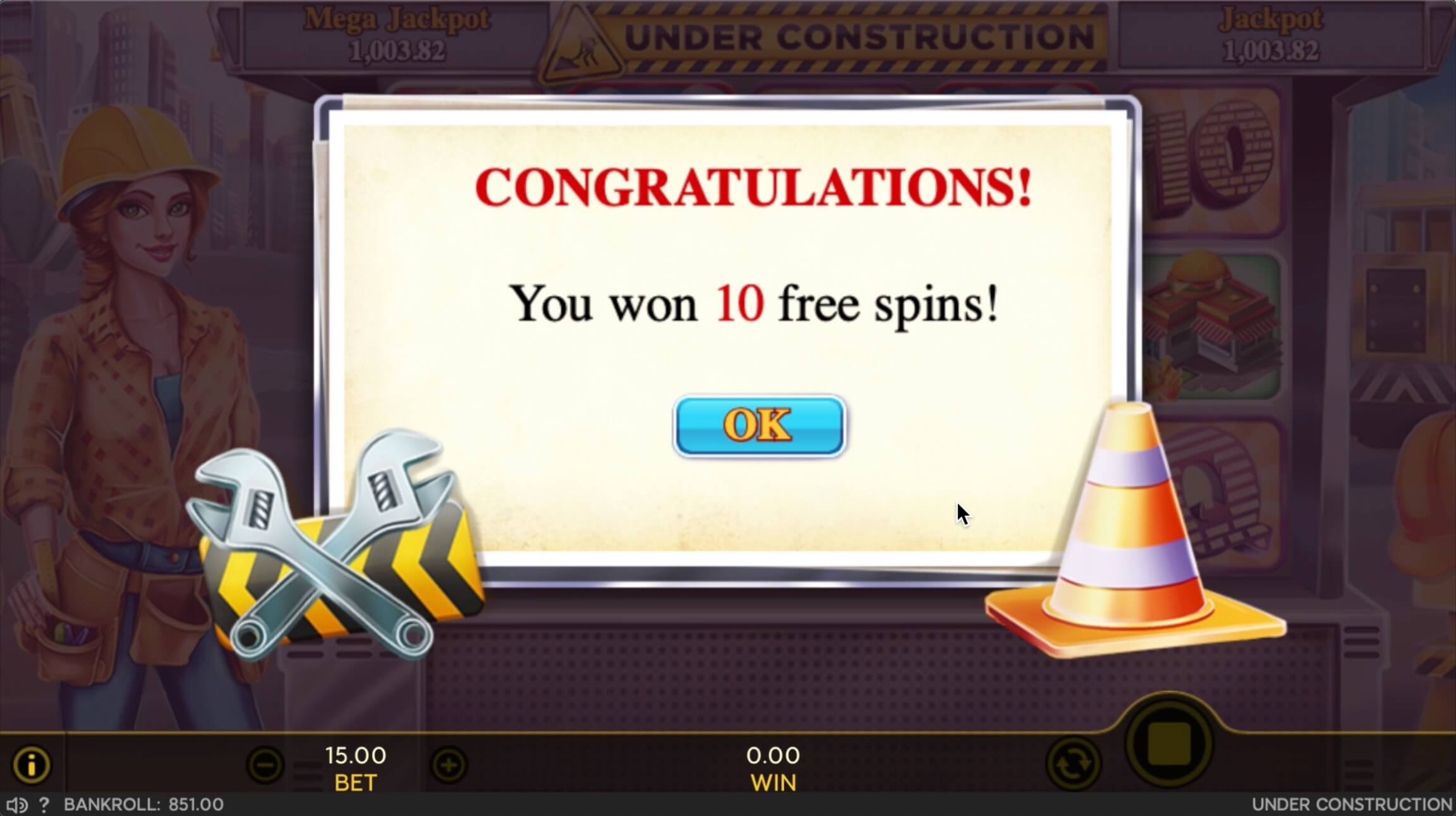 Of course, there is a bonus round at Under Construction. And not the only one, actually. First, there is a Pick-Me Game bonus feature. Its tile is a toolbox signed ‘Pick-me.’ We all have seen plenty of those games, so nothing new there. To initiate the game, land the Wild tile anywhere on the first and the last reels simultaneously. Then, you will see two pick-me icons before you.

All you need is to choose one by clicking it. If there is a prize behind it, then it will be added to your payline winnings. If not, you’ll return to the regular game mode. You may initiate this feature more than once. Remember, unlike regular paysymbols bonus tiles wins are multiplied by the total bet. 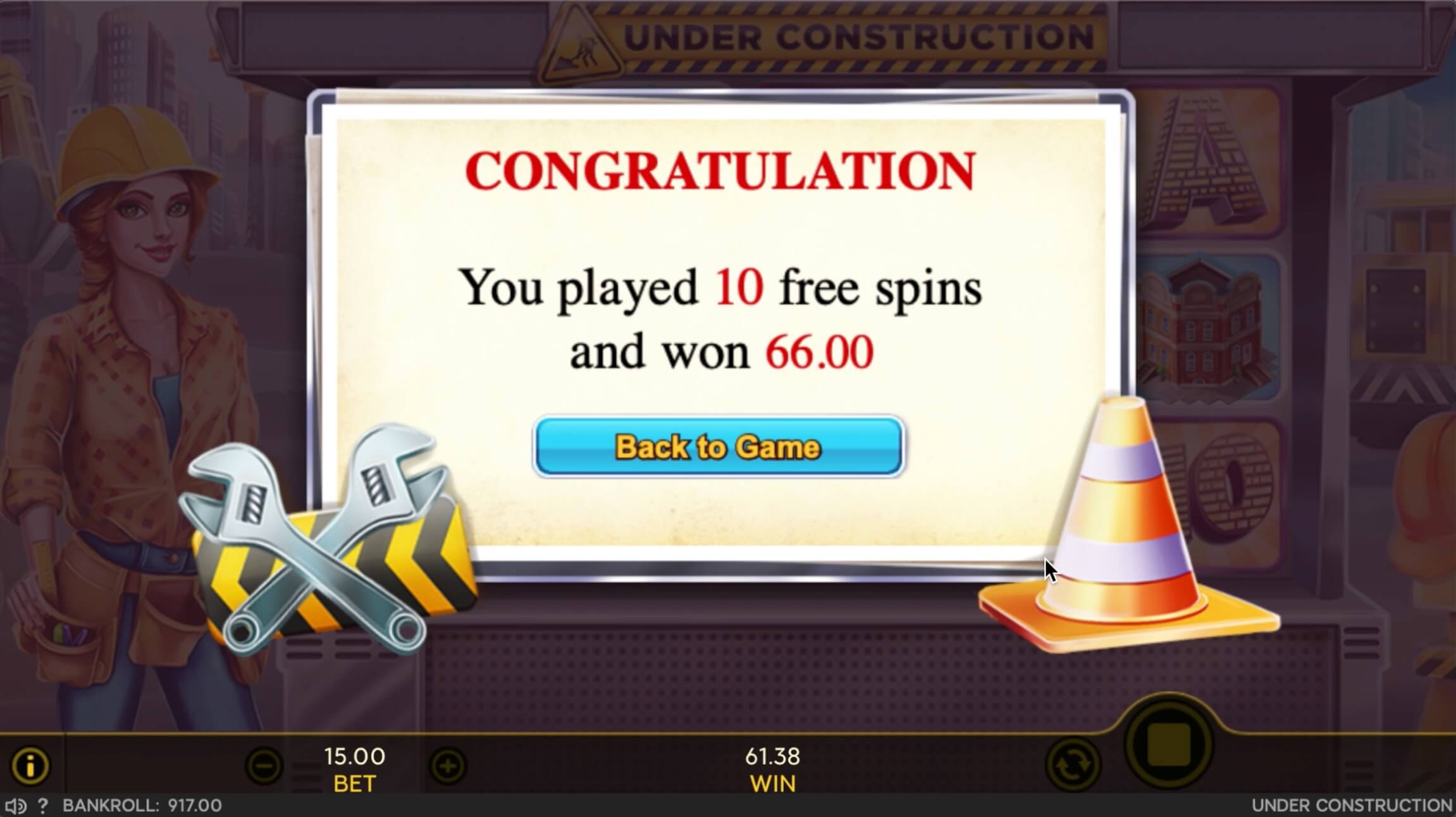 Another perk is a 4-leveled bonus game. The Under Construction bonus tile features a yellow truck, and it is signed Bonus. To activate this feature, you need to hit at least three bonus tiles. As we have mentioned, it comprises four levels. On each level, you would have to choose one item. Each item comes with a multiplier that determines your final win. All you need is to multiply the total bet by the multiplier. All the wins will be added to the regular winnings.

But that’s not it. Under Construction features a random jackpot. And brace yourselves, it’s not one but two progressives we are talking about. Both of them are awarded randomly and there is no combination you need to hit to trigger the jackpot game. But the chance of winning the jackpot depends on the size of your bet. We wish they would say the smaller your wager is the higher are your chances are, but alas we strongly doubt that!

As all progressives, this one or should we say these ones are growing by 1% of all the games bets. Currently, Under Construction progressive is worth almost $6,500 and it keeps on getting chunkier! 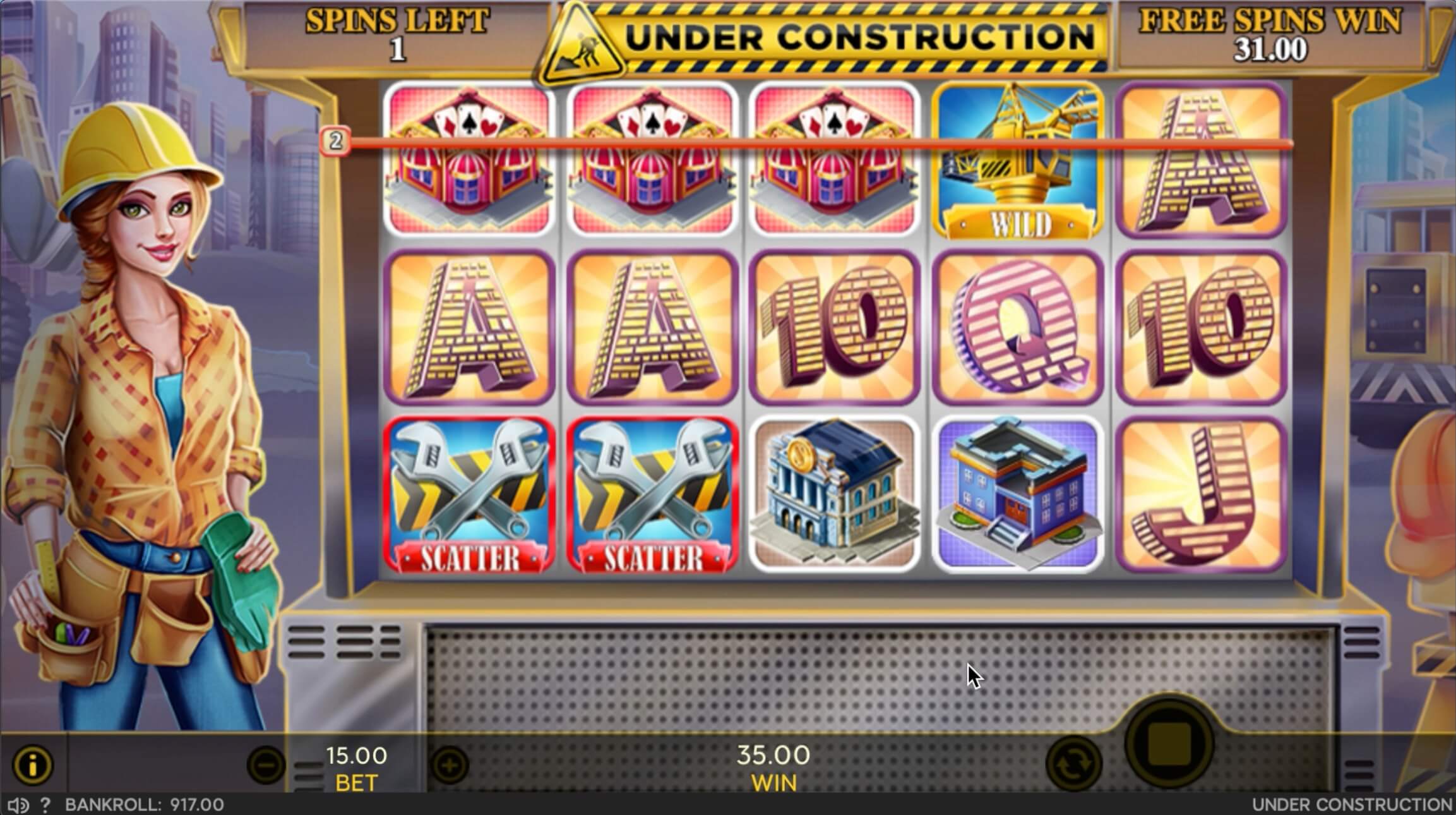 As for the interface, we have found it pretty straightforward and plain though fantastically functional. At the bottom of the screen, there are some control buttons for fixing the bet, for spinning as well as help and menu icons. You always see you win in the widget in the middle of the bottom control panel. The minimal bet is 0.30, meaning 0.01 per line. The maximum bet is 300, thus 10 per one payline.

Such range suits pretty much any gambler, no matter how big their bankroll is. There is also a top control panel. It features two widgets: one for the current Jackpot amount and the other one is for Mega Jackpot.

Feel like getting your hands a bit dirty? A construction-themed slot machine might be just the right choice for you! It’s entertaining, unusual, hard to find and comes with loads of solid legit wins.