Ever dreamt of going to space? As kids, we probably all dreamt of becoming brave astronauts orbiting the Earth. As we grew up, we watched StarTrack or suchlike, and we dreamt bigger: we dreamt of outer space and distant universes. For most of us it was just a sweet pipedream, but others went further. 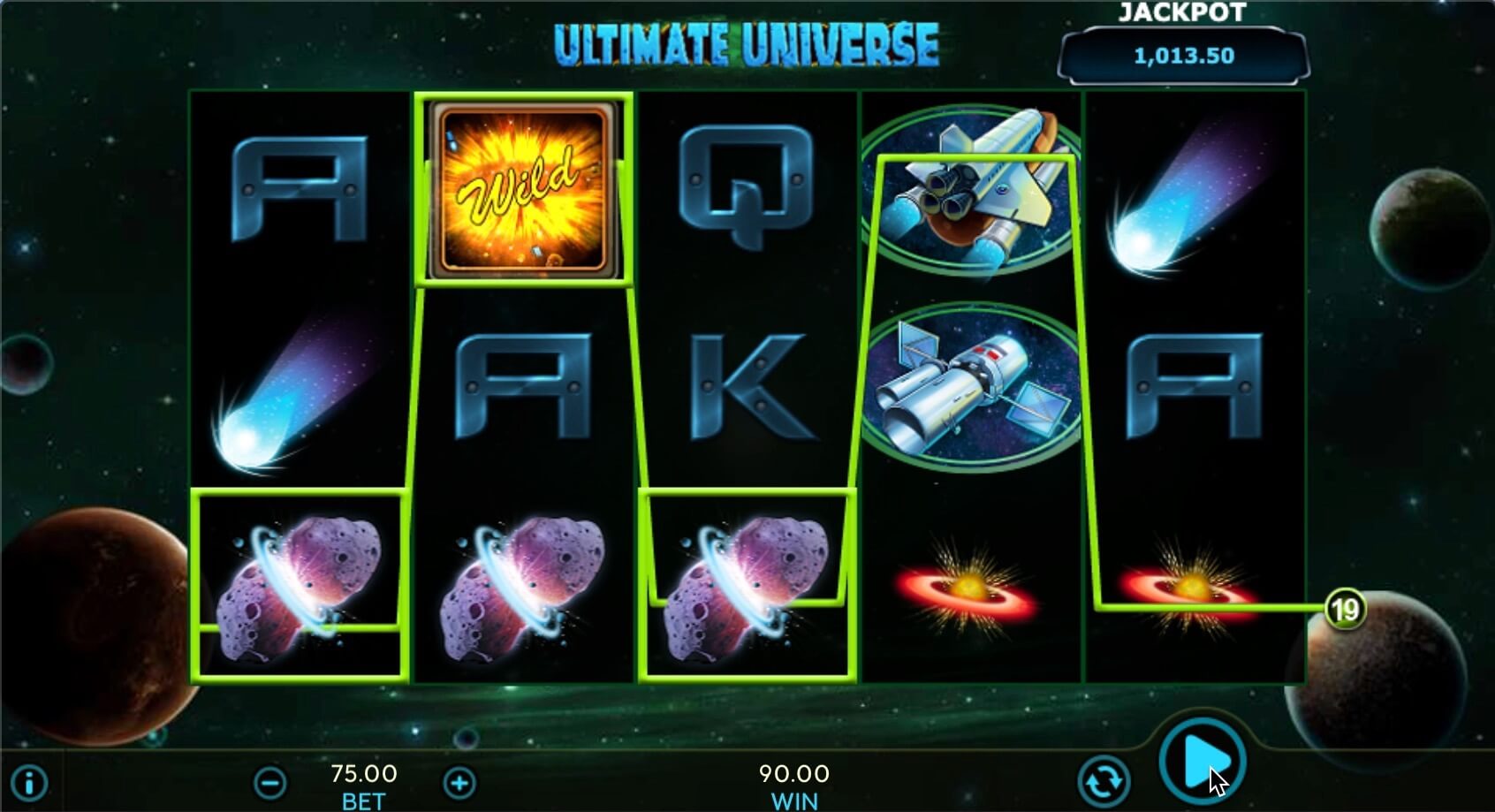 They have managed to accomplish it and actually visited space. But you don’t have to go through tough space program anymore. And you don’t have to wait for the commercial flights to start and pay loads of money for them. Now all you need is to log in to an online house and find the Ultimate Universe slot: your personal free pass to outer space and beyond.

The slot was designed by Random Logic. They are small, but their reputation is spotless. All their machines are of the best quality, and they are fair. Ultimate Universe boasts some spectacular graphics and animation. The intro is a fantastic cartoon. Don’t skip it to get a full view of the Universe filled with planets, comets, satellites, black holes and void space. 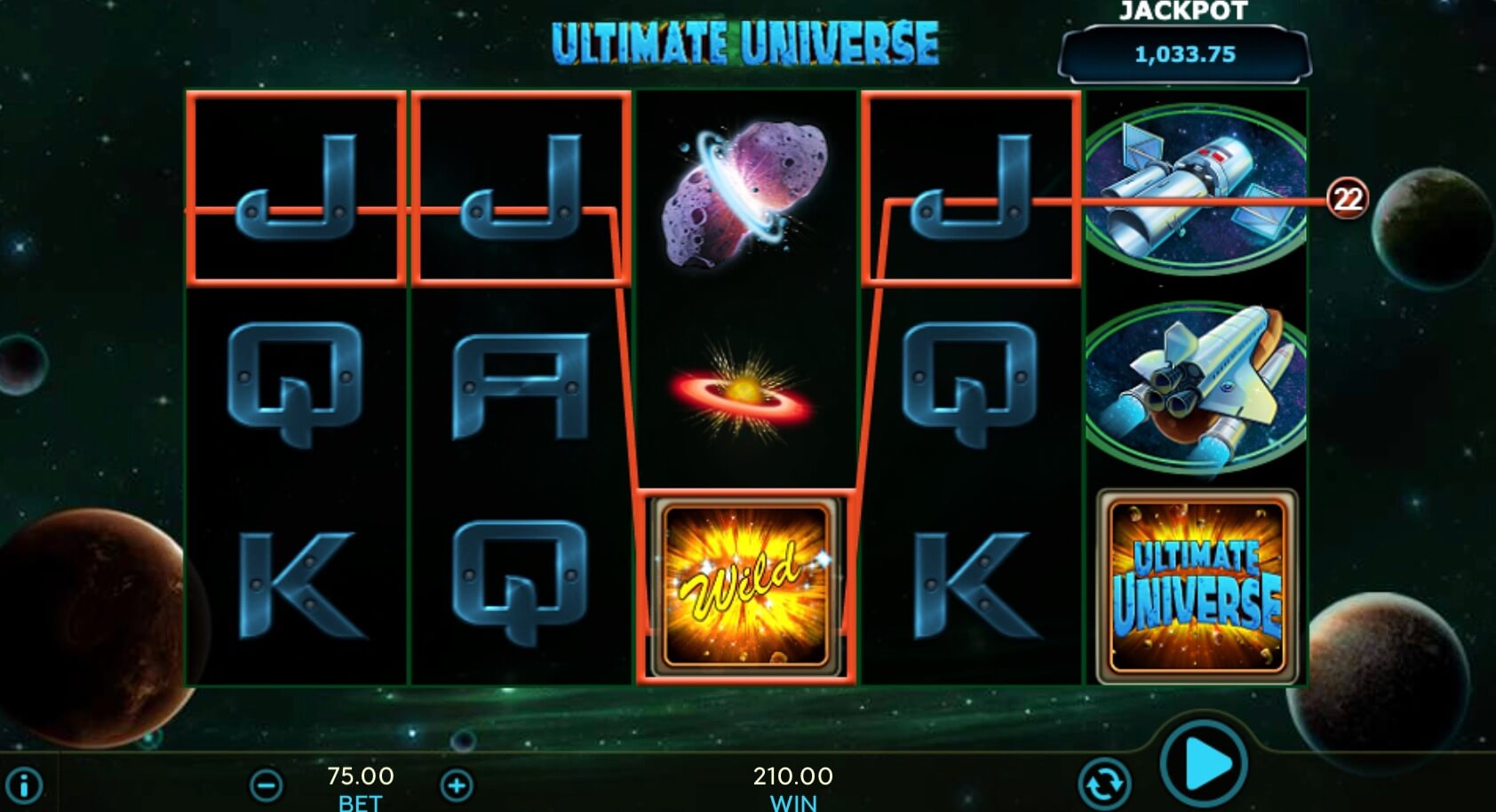 Ultimate Universe has a standard layout for a modern video slot. It features 5 reels and 25 fixed lines. The concept of the game is also pretty basic. You hit combos on the lines and get paid for them. All combos have to start on the first reel. The set of tiles consists of card-borrowed and unique icons.

The card-borrowed tiles feature Jacks, Queens and Kings worth 100x the line bet for the set of five while the identical combination of Aces is paid 125x. And that’s it for the lower-hand tiles. 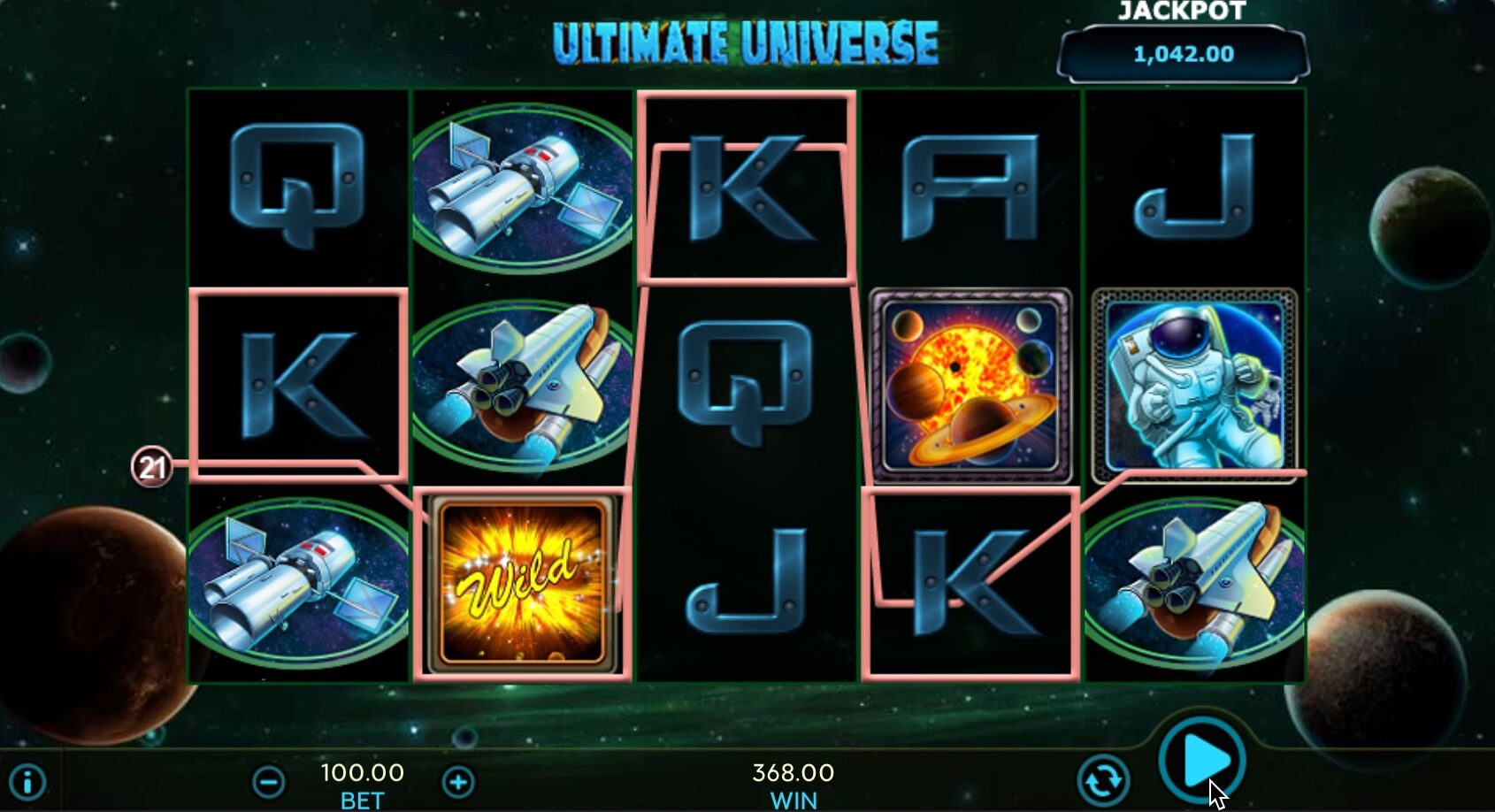 The rest of the icons are unique. Take a Comet, for instance, it is worth 150x for five. Or an Asteroid which is worth 200x for five. The tile with an Explosion resembling the Big Bang will be paid 250x the line wager. Five Space stations are worth 1,000x.

The Space Shuttle is paid 1,500x the line stake. And the highest-paid tile in the slot is the Astronaut worth 2.500x for five of a kind. That is basically all you need to know about the regular game mode. 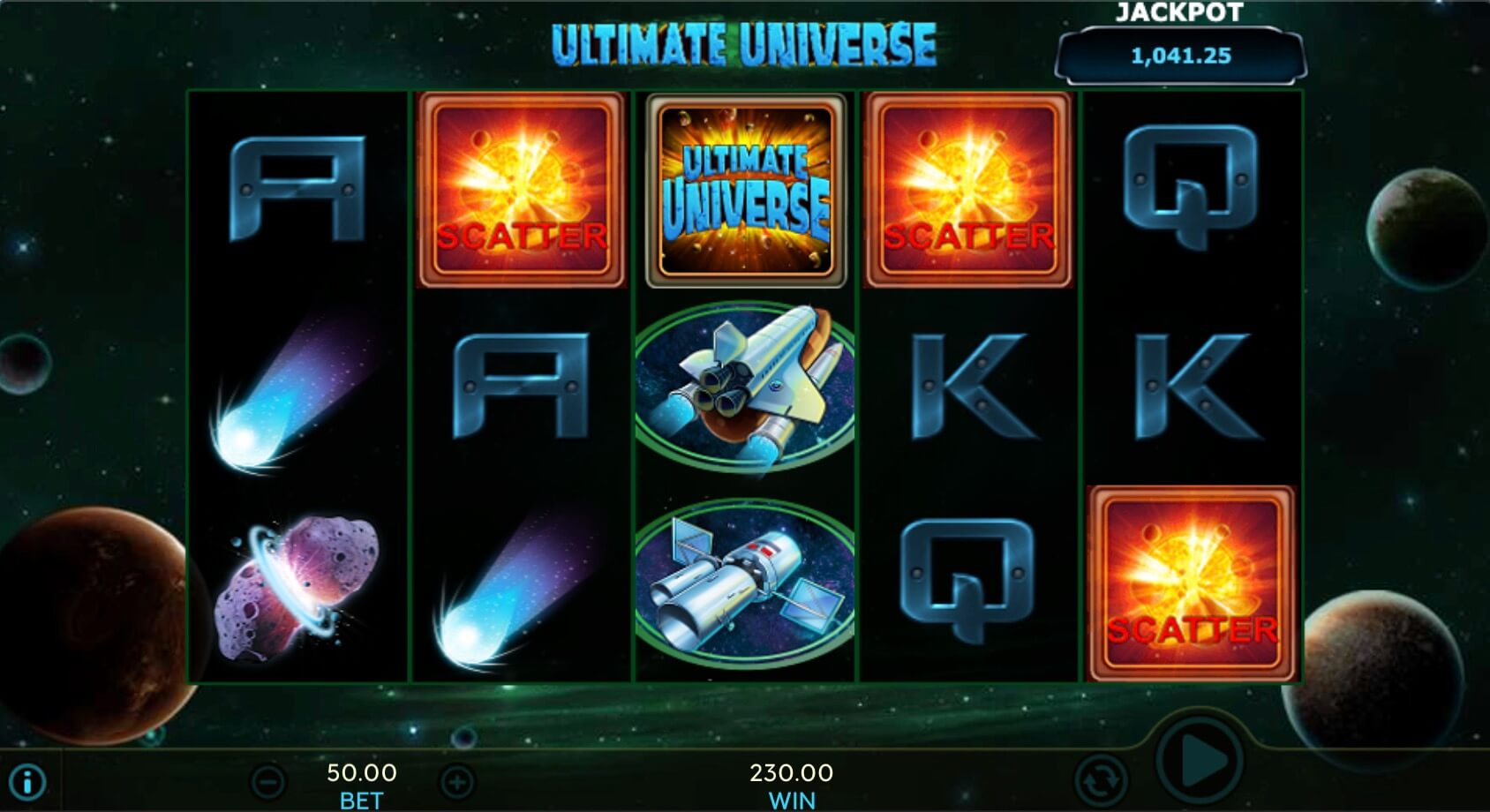 Now let’s figure out the special features the slot has to offer. First is the Wild or the substitute. It is a slot’s logo, and it replaces all other symbols but the Scatter. When hit in a combo the wild doubles the payout for it.

Another great perk is the Solar System tile. It’s the Scatter of the slot. The combination of at least three tiles anywhere on the reels activates free spins. Three tiles come with 15 free games. For the set of four, you will be given 25 free spins. And the max set of five Scatters will bring you 50 games. The Free Spin feature can also be re-triggered. 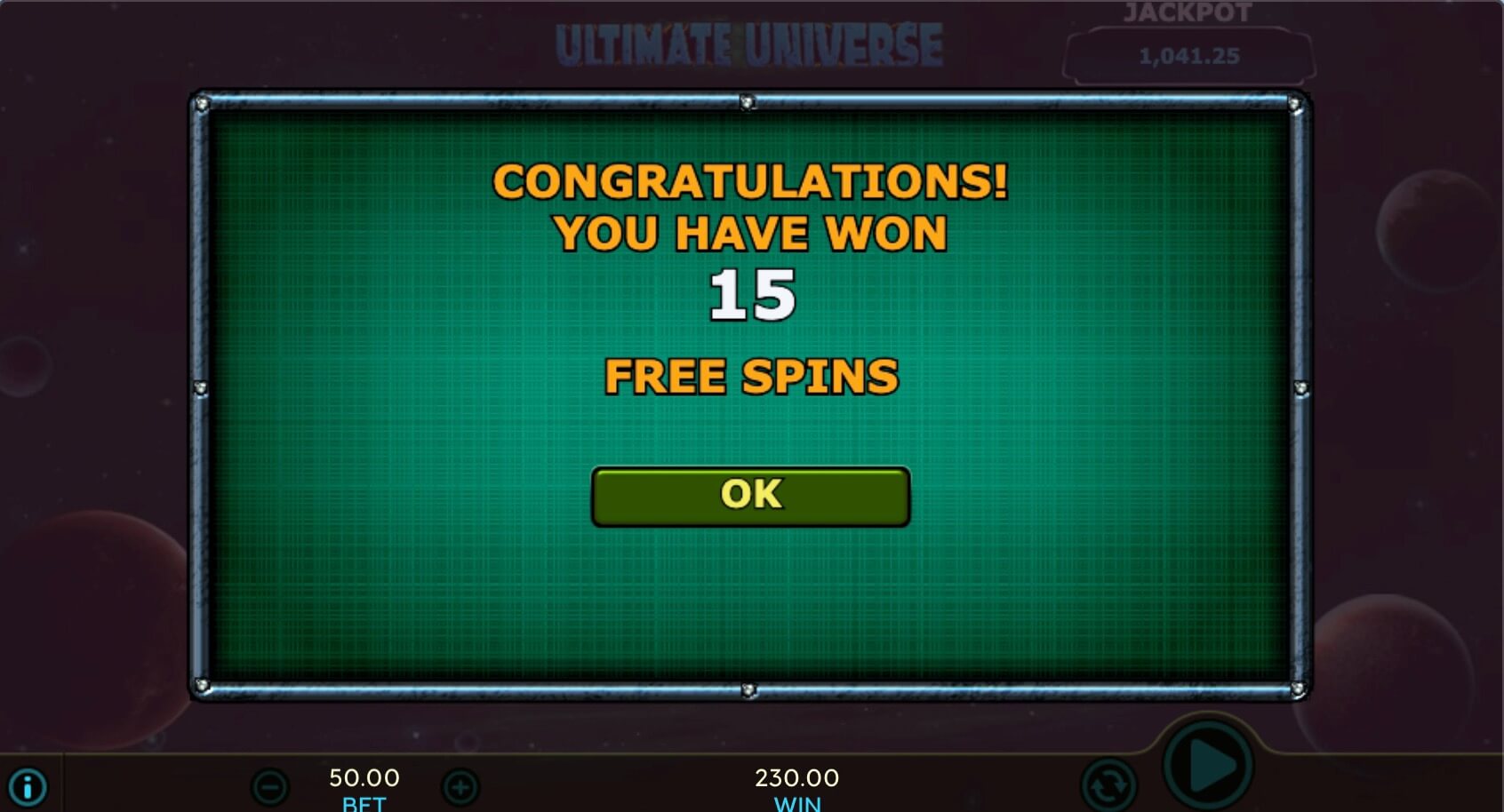 The Scatters can also form combos. Three-tile combos are paid 3x the total wager. For the set of four Scatters, you will have your total wager multiplied 10 times. The max combo is worth 50x the total bet.

But the best bonus feature of the game is its ultimate Progressive Jackpot, which is now over 33k. Ultimate Universe’s Jackpot is built just like any other progressive: a certain percent of every wager is cut to accumulate the big pot. 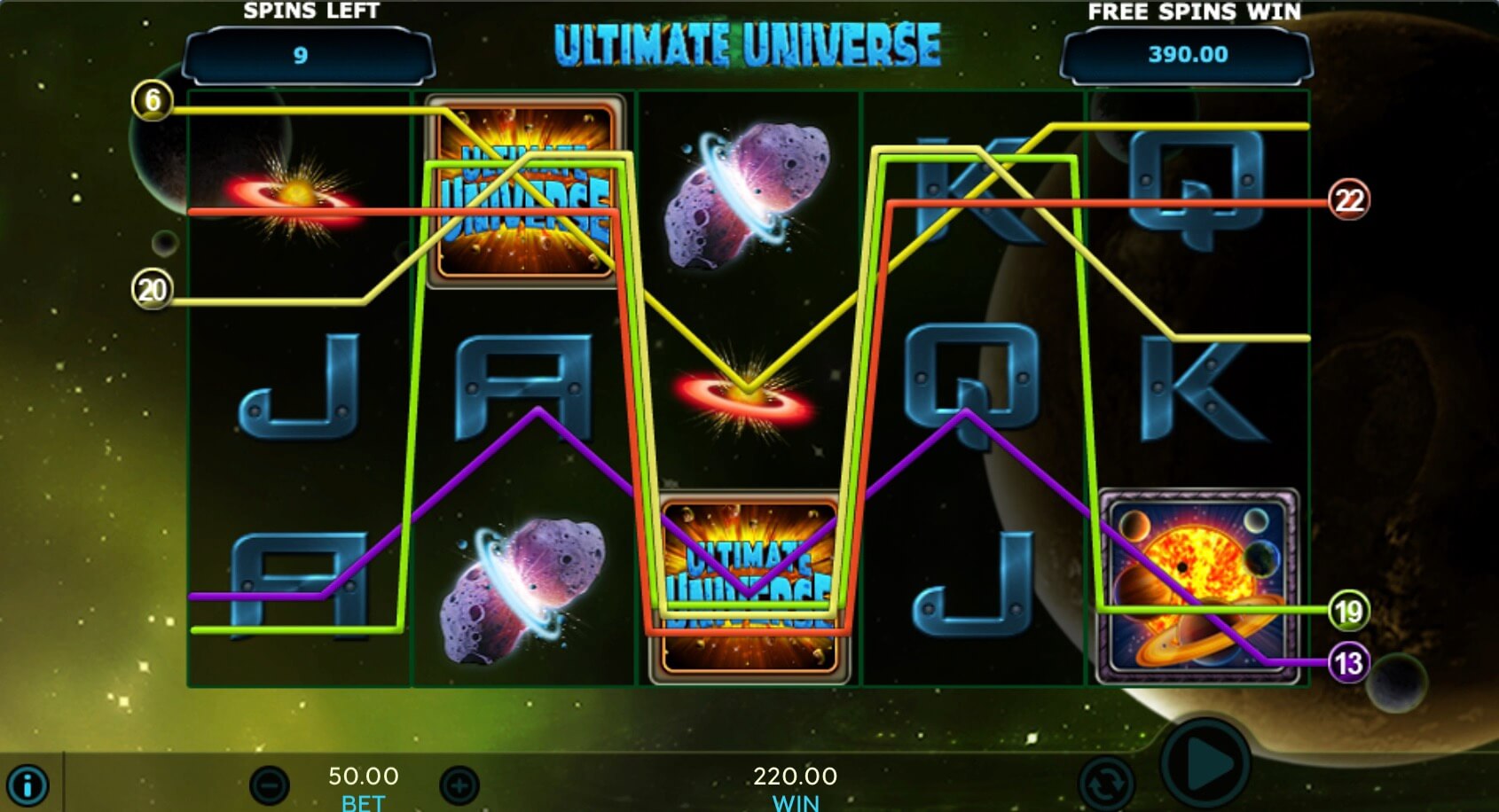 There is no special combo to trigger the feature, it is awarded randomly. Any player could be the one to hit it, though the chances depend on your wagers. The progressive feature may be activated only during the regular game mode.

As for betting at the Ultimate Universe slot, nothing’s easier. There are no paylines to choose as they are fixed, so all you can do is fix the total wager. It may be a little as 0.25 or as solid as 250.00 per one spin. You may change the amount using the ‘+’ and ‘-’ buttons at the bottom of the screen. The spinning works in manual and automatic modes. Choose whichever suits you best. 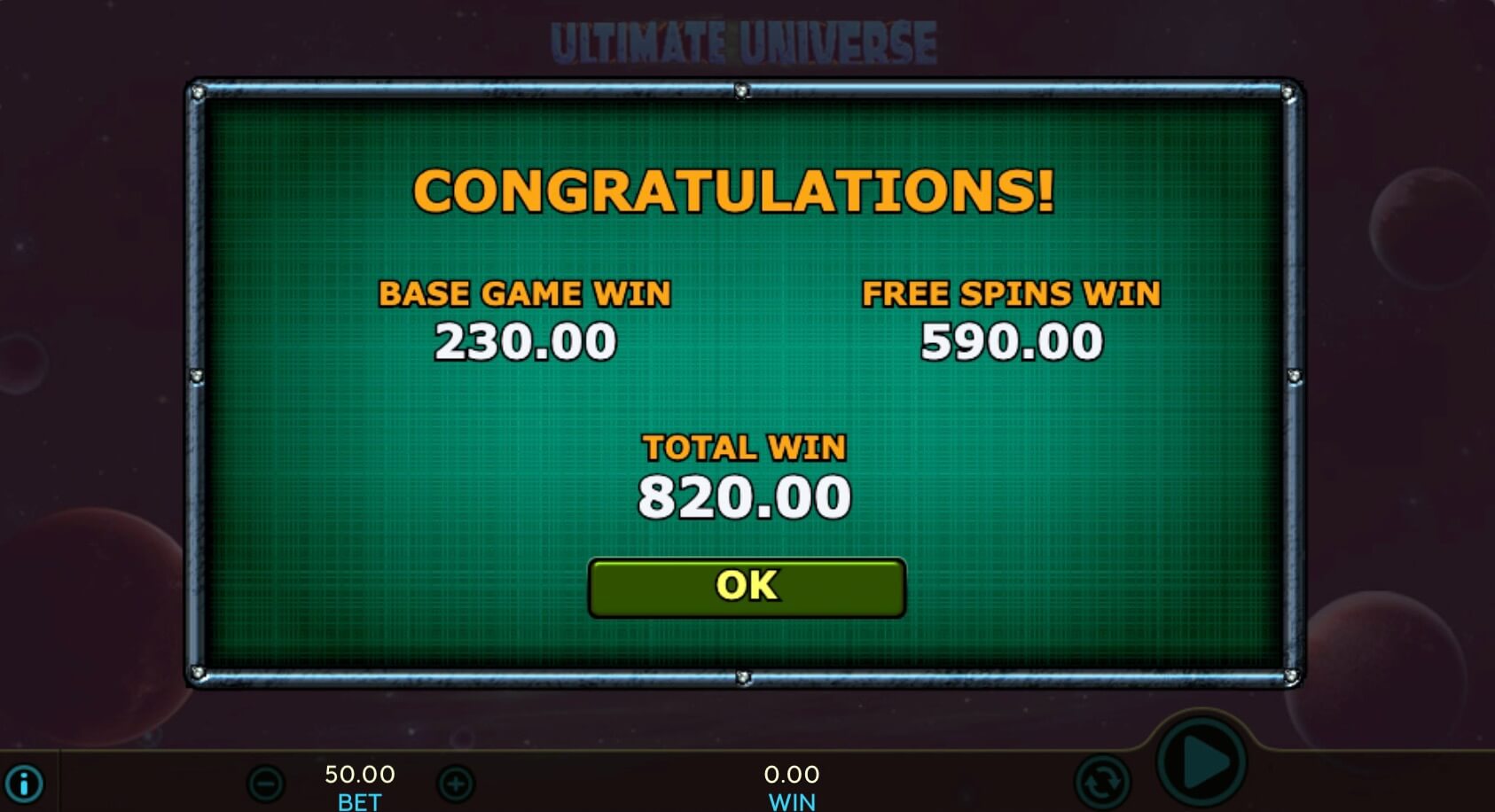 Who knows, maybe for you the Ultimate Universe is only the beginning of a long and successful journey into space. It surely does give you a good insight of how it looks like. Also, it’s packed with possibilities and hidden treasures, just like real space is.

Take some time to practice and NASA will gladly take you into their training program. If not, wait for discounts from Elon Musk: season greetings special ‘To the moon and back’ or something like that. Sounds nice, doesn’t it? So, waste no time and start practicing: it makes perfect!