Are you into classic casino slots as we are? Guess we all love those simple machines. Some say their gameplay is way too simplified, that the quality of their graphics and animation is way too low. Sometimes it’s reasonable, but sometimes it’s far from it.

That’s the case with NetEnt’s Twin Spin. They took the classic fruit machine and turned it into an exciting modern video slot, one of the finest machines in the market. 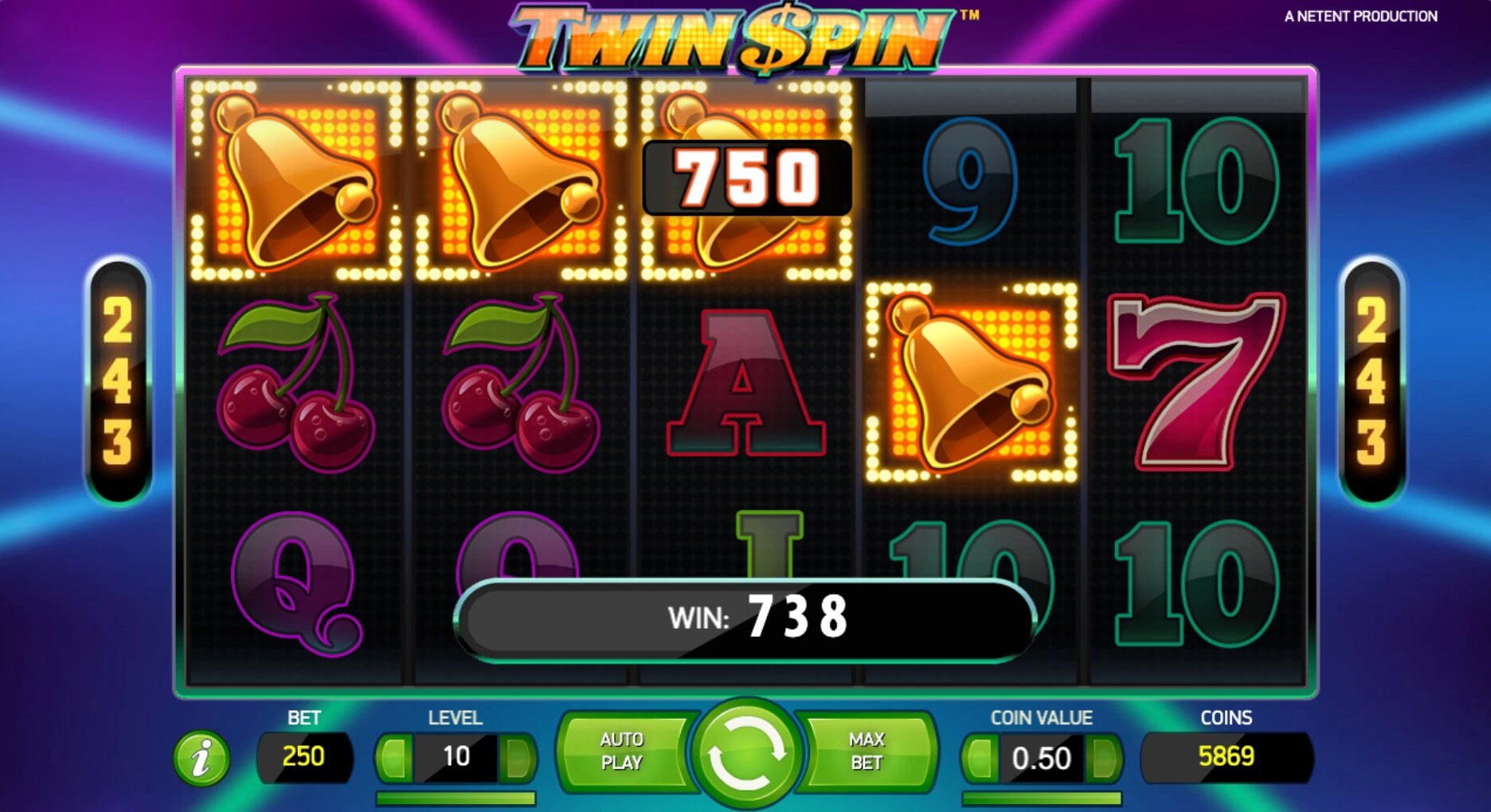 In the heart of Twin Spin lies the basic fruit machine, with its cherries and diamonds. The slot features five reels and no lines. Instead, it offers 243 ways to win as any combo of at least three identical tiles on the adjacent reels counts as the winning one. It doesn’t matter which stops the tiles hit.

The tiles here are classic card tiles and some very retro fruit machine icons. The set of five 9s, 10s or Jacks is paid 25x. For the four tiles, the bet will be multiplied by 10. Three of a kind are worth 3x. Five Aces, Kings or Queens are paid 40x. 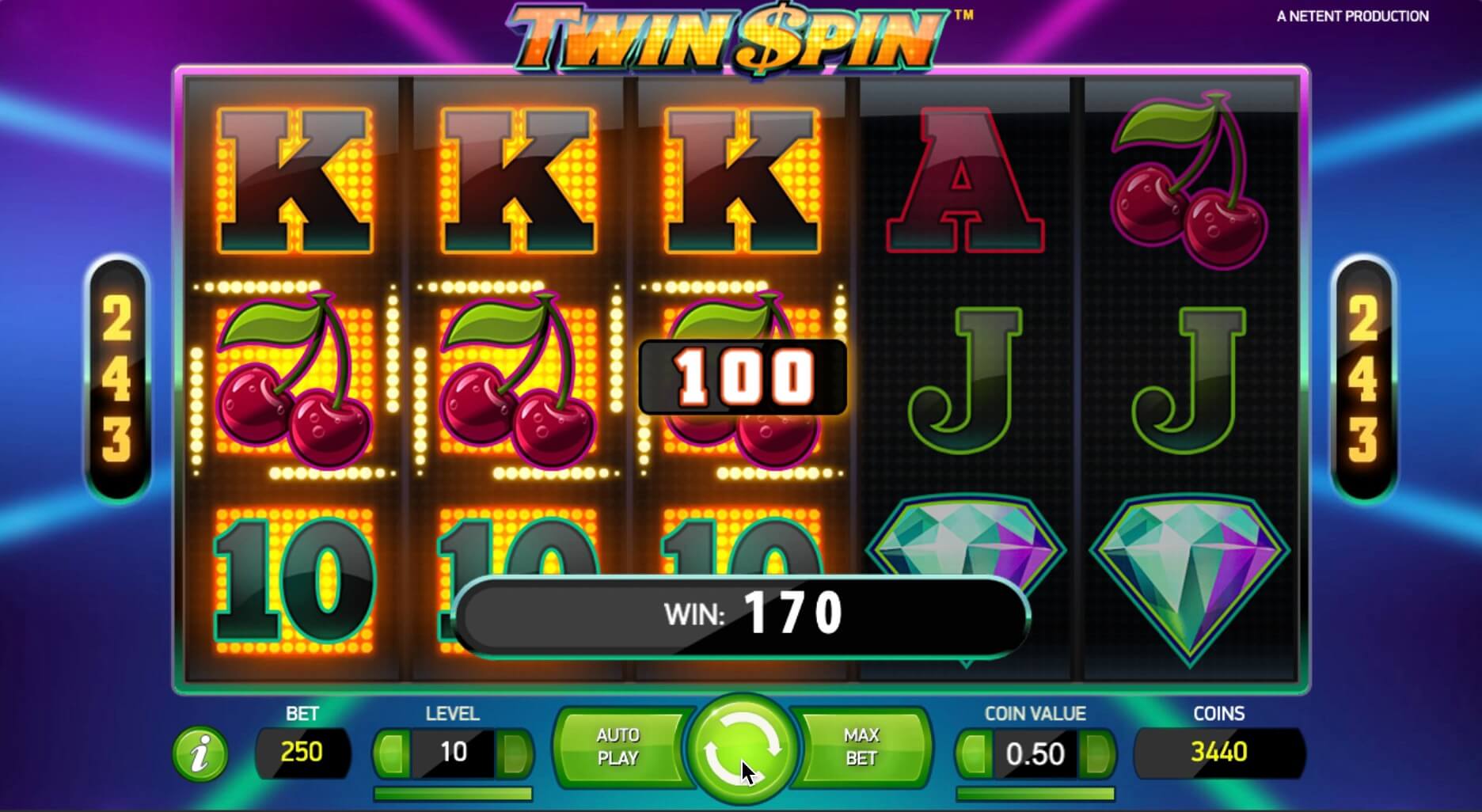 Apart from the regular tile, there is also a Wild symbol. At Twin Spin, the Wild substitutes all symbols. It appears on all the reels except for the first one. 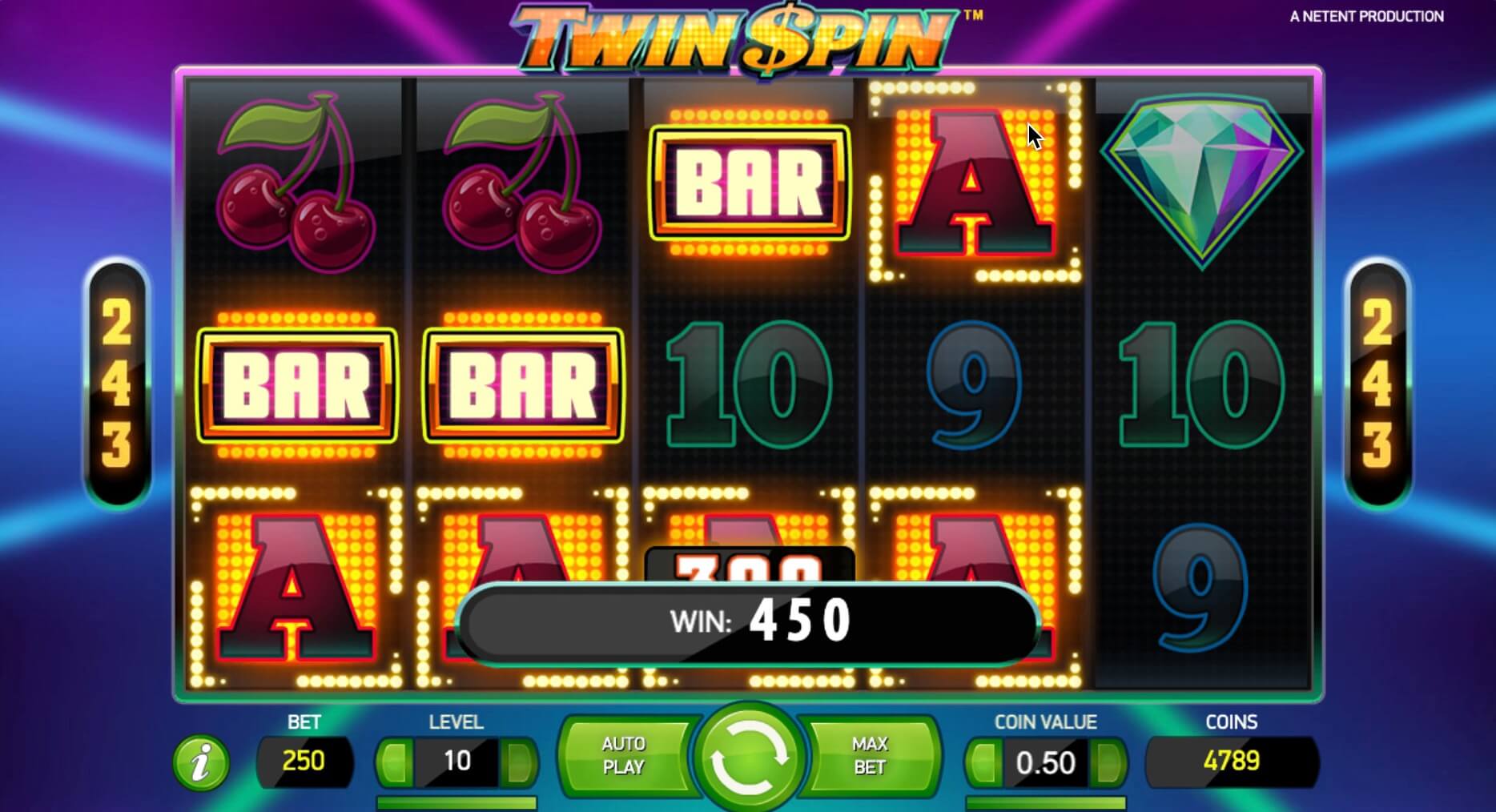 The most unusual feature of the slot is that its bonus mode is built in the regular game mode. So you don’t have to hit a certain combo to activate it during the spin. It gets activated automatically at the beginning of every spin. The feature is called the Twin Reels feature, hence the name of the slot.

At the beginning of every spin, two identical adjacent reels stick together.

As the spin goes on those two reels may expand to take three or four or even five reels. They will also be identical, obviously. Thus, you automatically have several combos ready for the payouts. The twin reels may appear on any reel of the game: the first through the fifth. 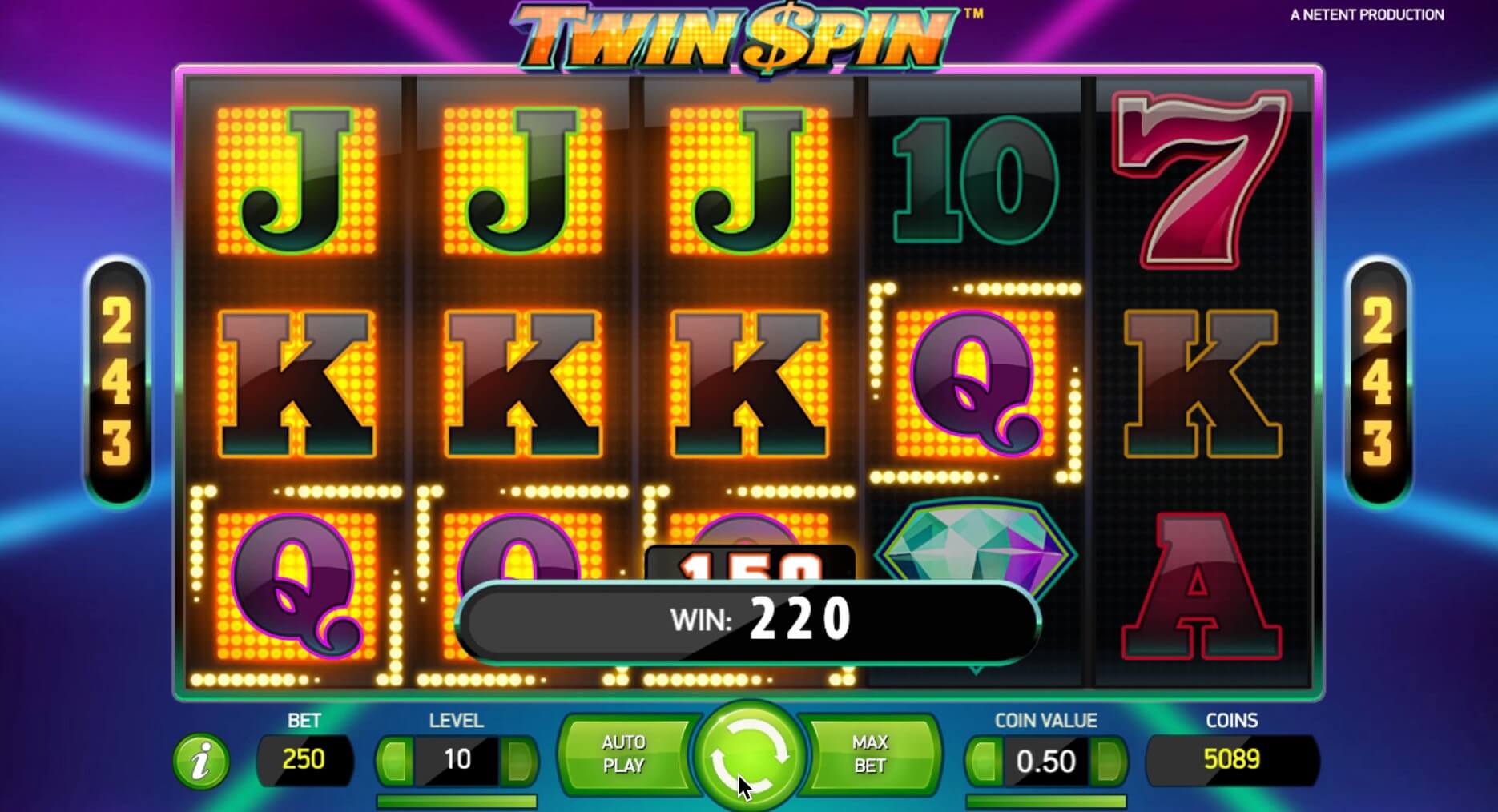 This feature is random, so you can’t control or predict it. But if you get lucky, you will have five ready for the payout combos with pretty nice multiplies.

Betting is quite standard at Twin Spin. The slot features no lines, so you can’t choose any. But you are free to decide on the value of the coins. One coin may be worth only 0.01 or 0.50 credits. There are ten betting levels: 25 coins per one level. 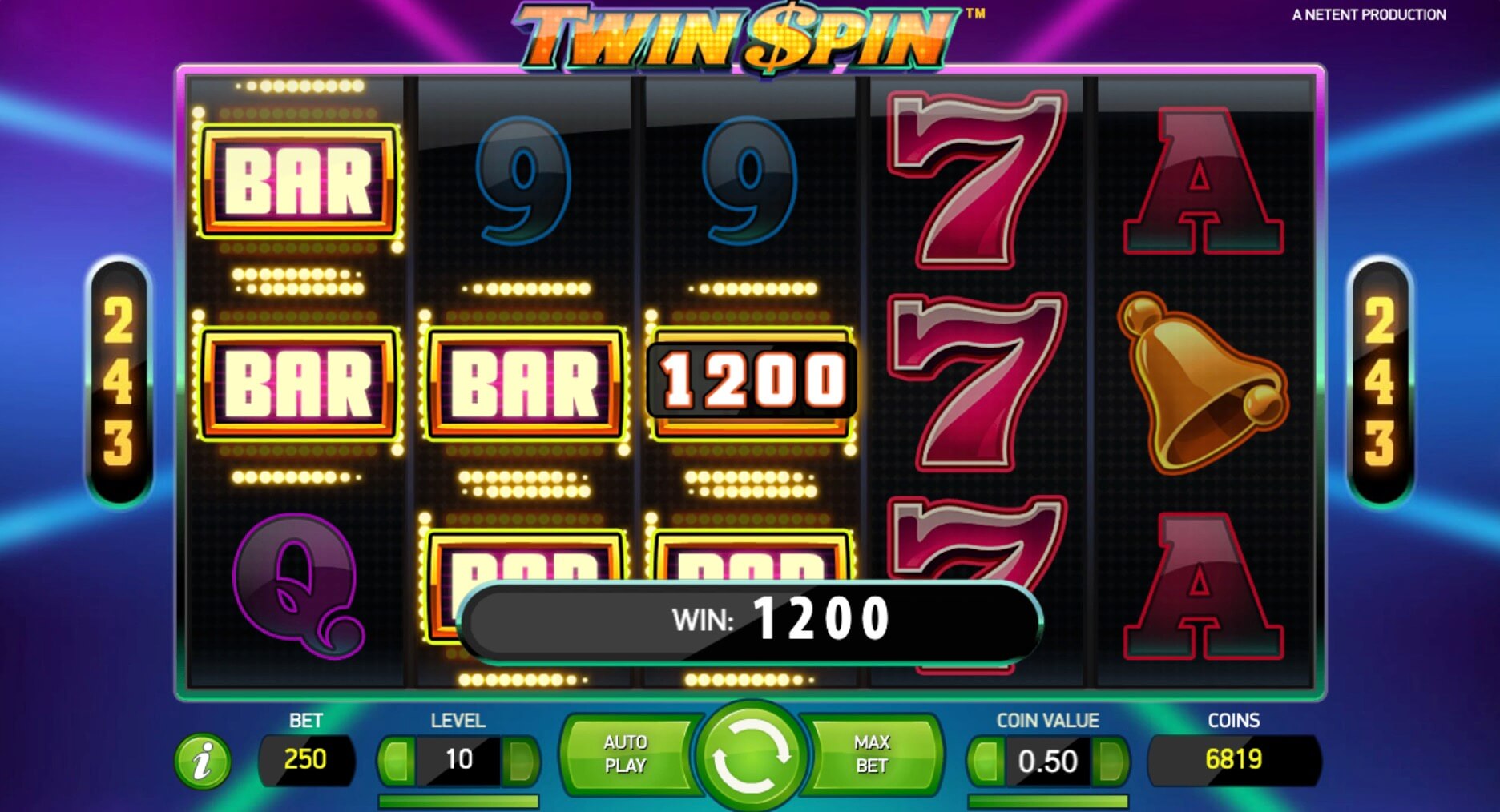 So the total spin wager may be as low as 0.25 credit and as high as 125.00 credits. It’s not strikingly high as some highrollers might want it to be, but it’s solid.

To adjust the betting values, use the reelscreen control panel. There are several buttons for fixing the level of betting as well as the coin’s value. Two widgets show how many coins you have staked and how many you have left. 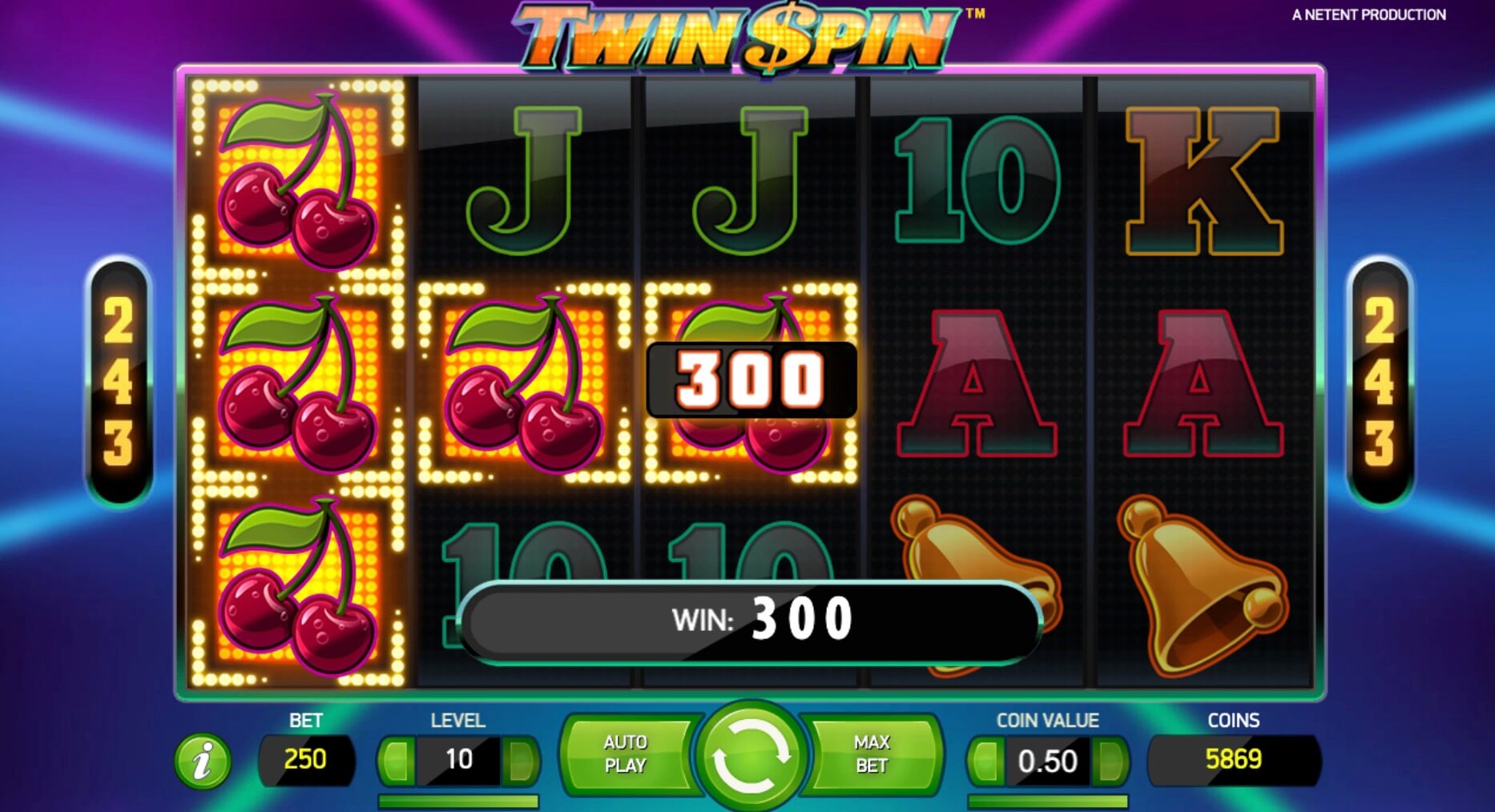 If you don’t feel like pressing the level button so many times you may go with a Bet Max button. It will automatically set the highest possible wager at the given coin value. Spinning might be done manually or automatically. Just use the corresponding buttons at the bottom of the screen.

So did we like Twin spin? Are you kidding us? We are mad about it! What NetEnt have done to the classic and, let’s face it, rather boring slot is fantastic. It’s simple but holds everyone’s attention. 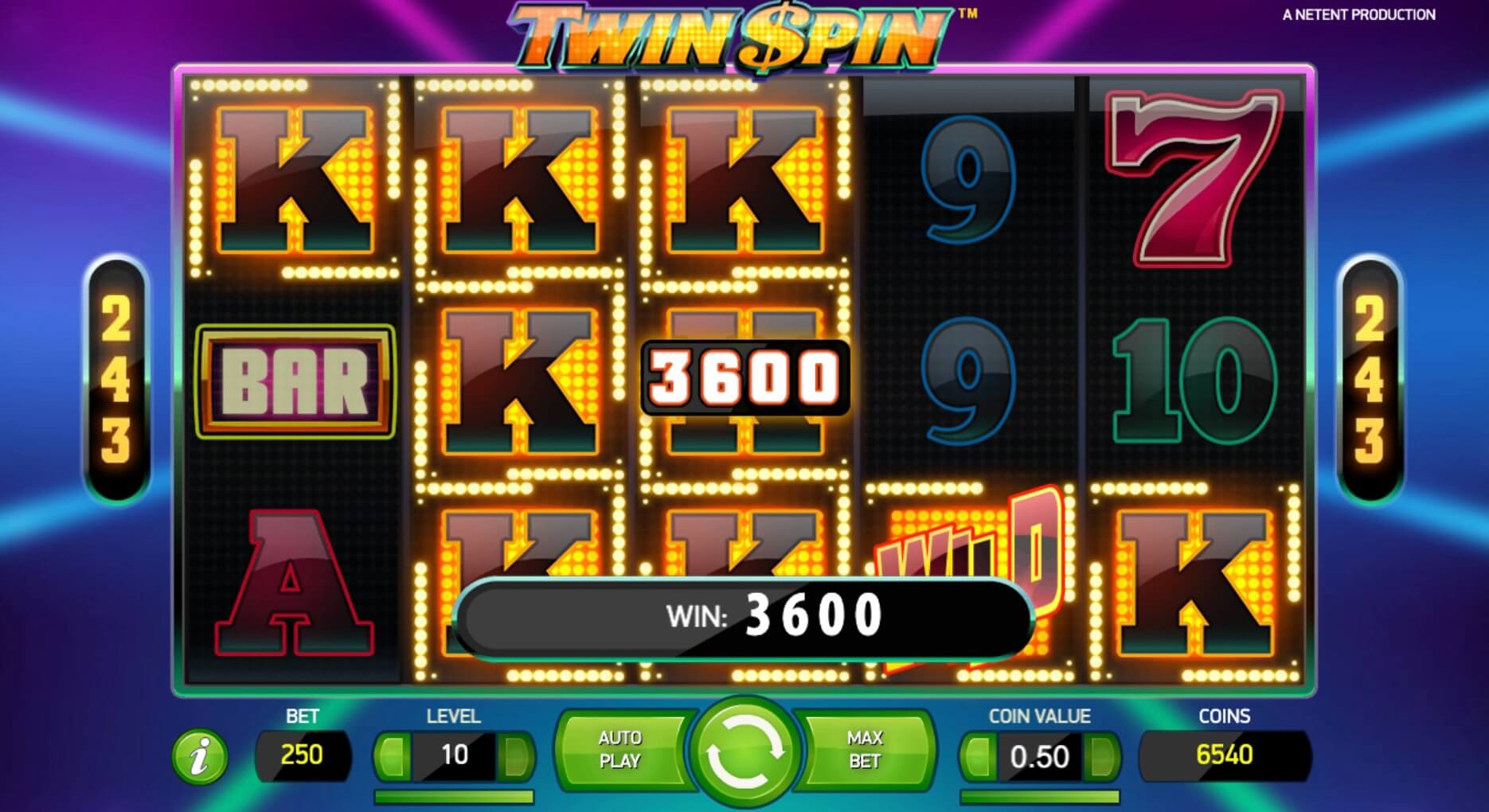 The idea to combine the bonus features and the regular mode is mind-blowing. No need to waste time trying to hit the hot combo, no need to feel frustrated about not hitting it. Now every spin is loaded with a guaranteed bonus. How big it will be depends on your luck only!

So good luck with it!