Storm With a Chance of Free Spins

Feeling epic? In an Olympic or Titanic kind of way? Well, we know exactly where you should turn to. Titan Storm by NextGen is a great slot for venting your strong feelings. It’s epic enough itself, so it will handle. What’s more, it can also award you with some yummy wins. Very stress-relieving indeed.

Titan Storm features standard 5 reels and no lines whatsoever. To win here, you have to land a winning combo on adjacent reels starting from the leftmost. The minimal combo for any tile is three, and the maximum is, obviously, five. There are two exceptions, though, and we are going to talk about them later. 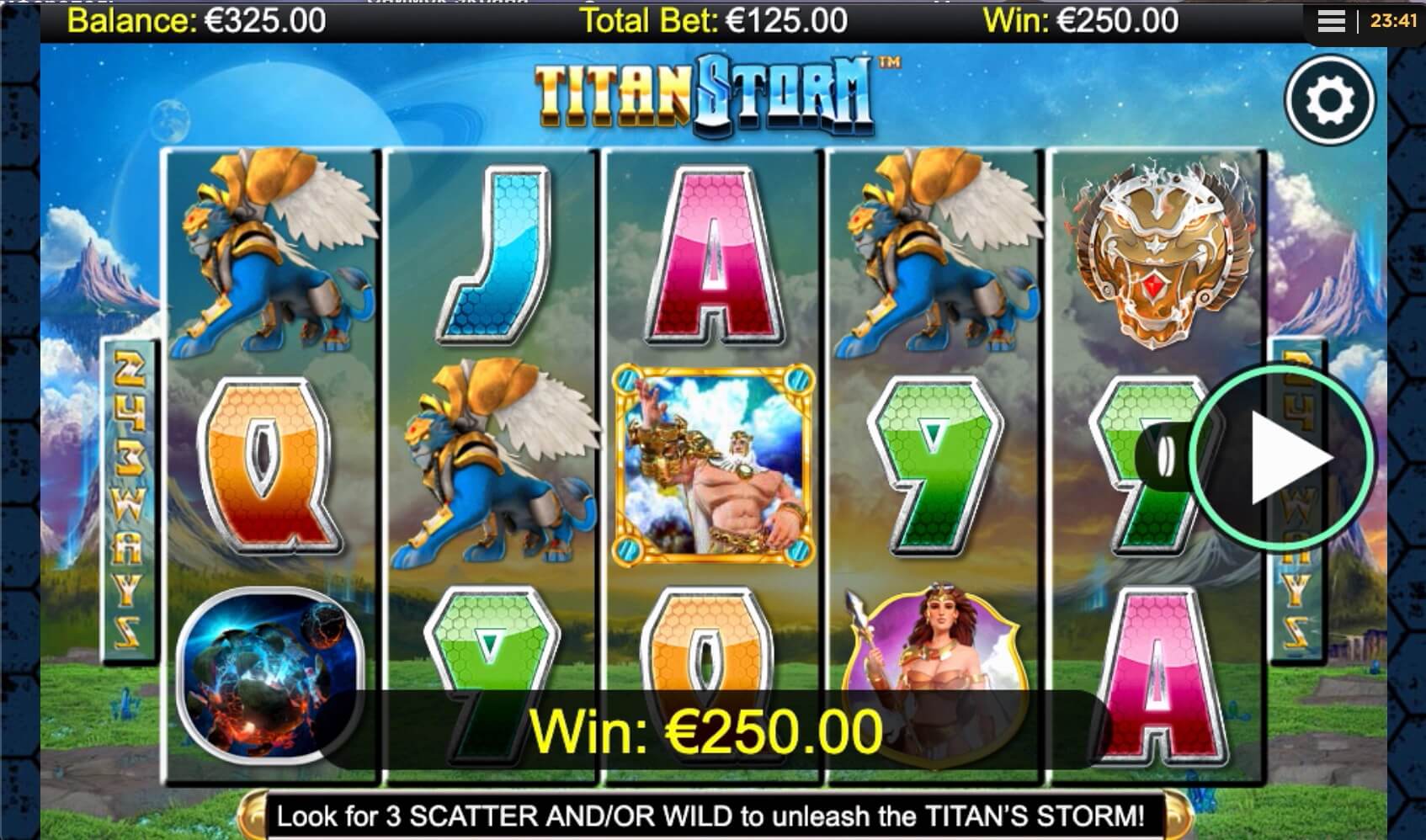 The paytiles can be divided into 2 big groups: the card-borrowed icons and the authentic ones. The card borrowed tiles are cheaper and more numerous. There are six of those in the game. The payout for any five of a kind will be the same: 100x the bet. 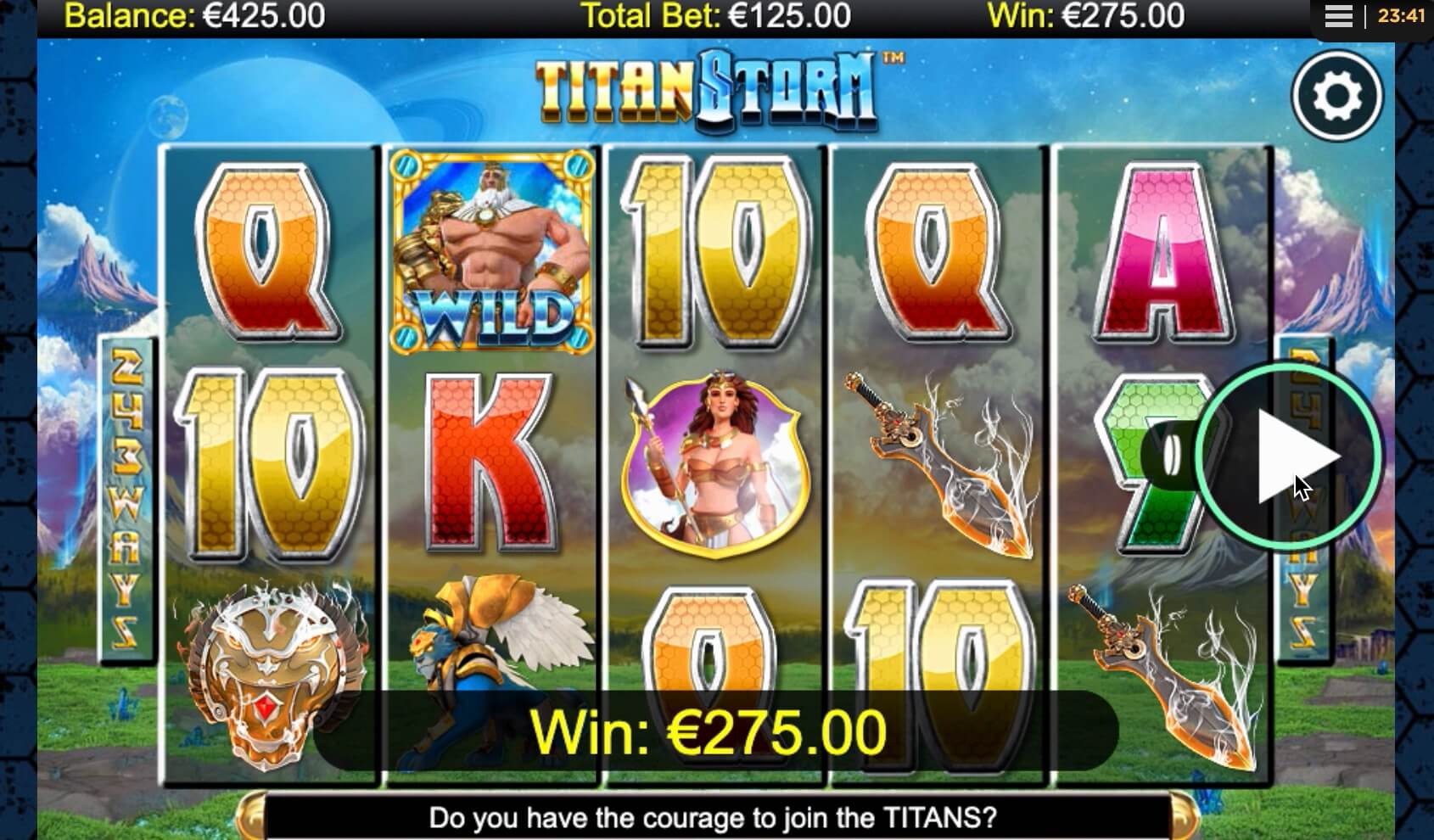 Card-borrowed tiles are great. There are plenty of them and they are easily identifiable. But they are not the reason why we play Titan Storm, right?! Apart from them, look out for four more tiles. They are themed and paid much better. The icon with a Shield and a Sword is paid 200x the bet for five. A tile with a Blue Tiger with wings, or it might be a lion, is worth 500x the bet for five.

The last two paysymbols are different from the bunch of the previous. They are the most expensive tiles in the game, and also the minimal combination of those starts with two tiles only. A symbol with something that reminds of an Exploding Planet is paid 1,000x the bet for 5 and 10x the bet for 2 of a kind.

Also, there is a tile with a Greek Goddess. The payout for its minimal combo is identical to one of the previous tile. But the max combo is worth 2,000x the bet instead of 1,000. 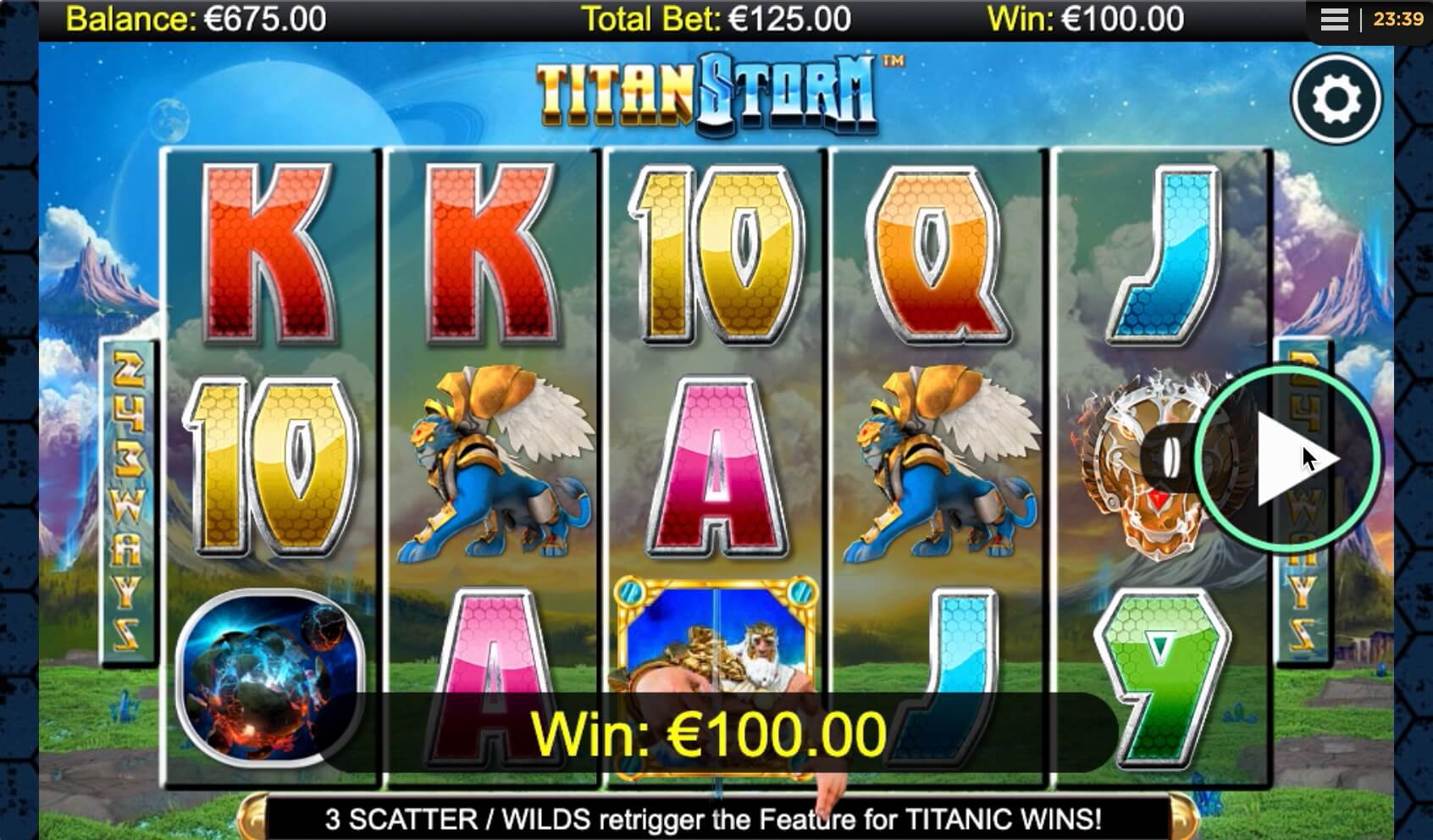 Titan Storm’s regular gameplay is not different from any other slot’s gameplay. But there are several bonus perks the slot offers. And they are quite a catch. As always, there are two bonus tiles: the wild and the scatter. The Wild is a tile with an Olympic god, might be Zeus himself, and it’s a substitute.

The wild appears on the 2nd, 3rd and 4th reels only. Another bonus tile is the Scatter. This tile features Golden Gates and a sign ‘Scatter’. The best perk scatters offer is that they are paid for combos, just like regular tiles do. 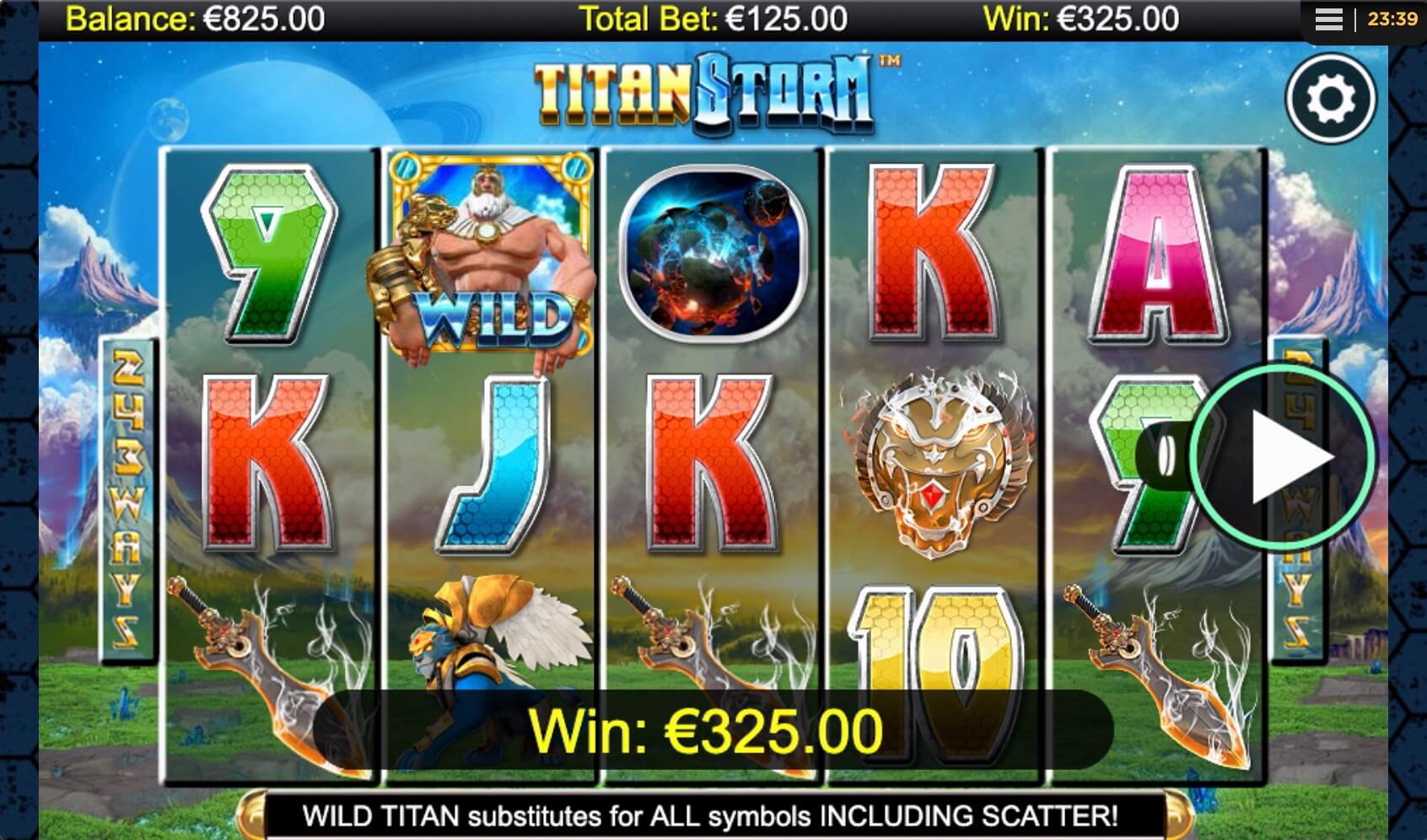 The combination of three of a kind is worth 50x. And this win is going to be multiplied not by the bet but by the total wager instead. Also, scatter wins are paid not only left-to-right, but right-to-left as well.

Both Scatter and Wild trigger the bonus game. The bonus game here, at Titan Storm, is the free games’ session. At least three bonus tiles are necessary to initiate ten free spins. During the free games the scatter and the wild tiles merge and become one combo-icon ‘Scatter / Wild’. 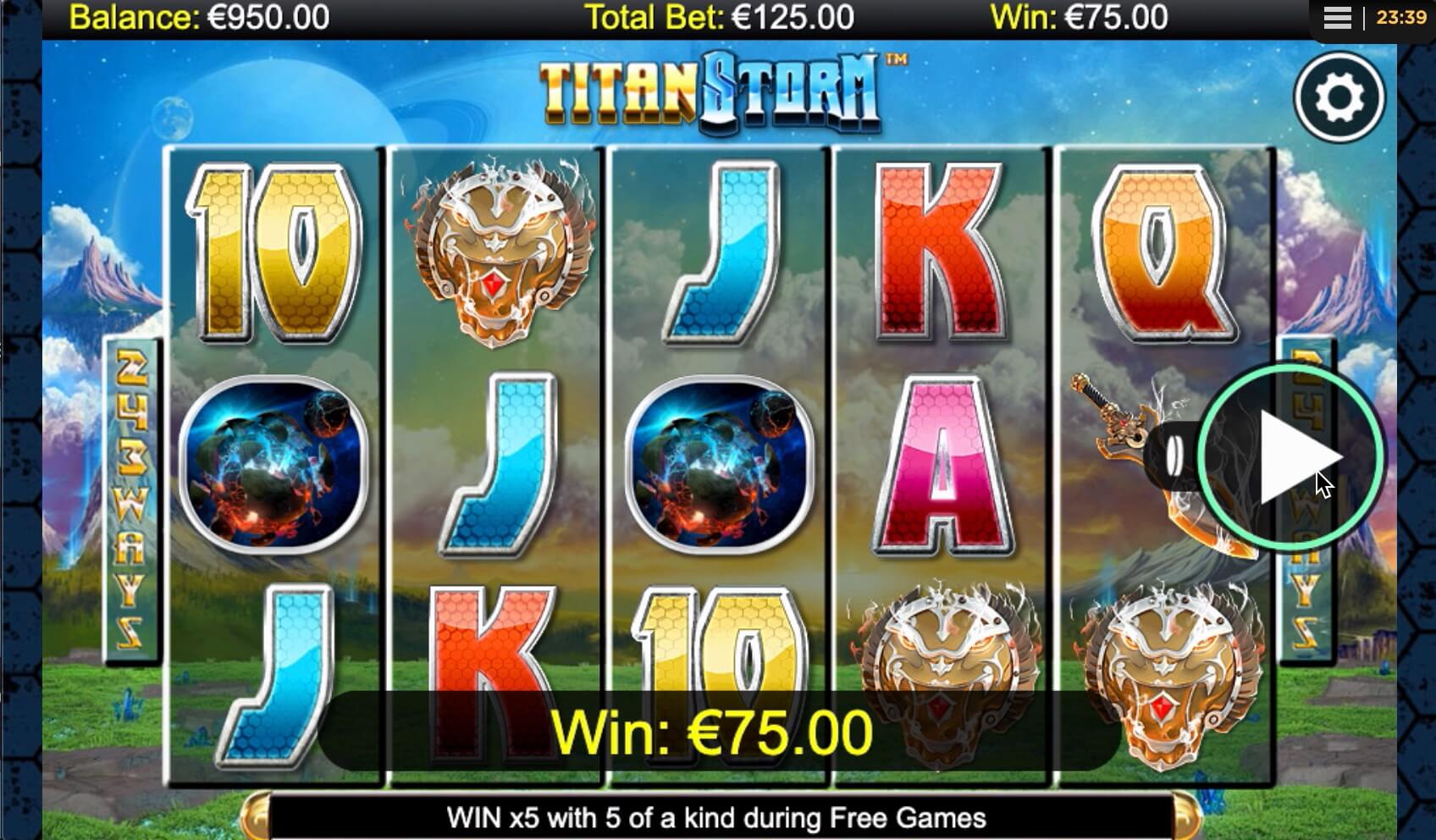 This wonderful new symbol may replace any other tile in the game, with no restrictions whatsoever. It still may appear on the middle reels only and never on the first and the last ones. If you hit a maximum combo of any paysymbol during the free games, your win will be multiplied by 5 as an extra perk. All the free games are played at the stake of the triggering game. You may also re-trigger the free-games’ feature.

Remember, NextGen is all about simplicity. Their slots have clear and easily understandable gameplays. The design of their slots is also extremely intuitive. There is nothing else on the reel-screen but the Help and the Spin buttons. You won't even find a separate bet-adjustment knob there. 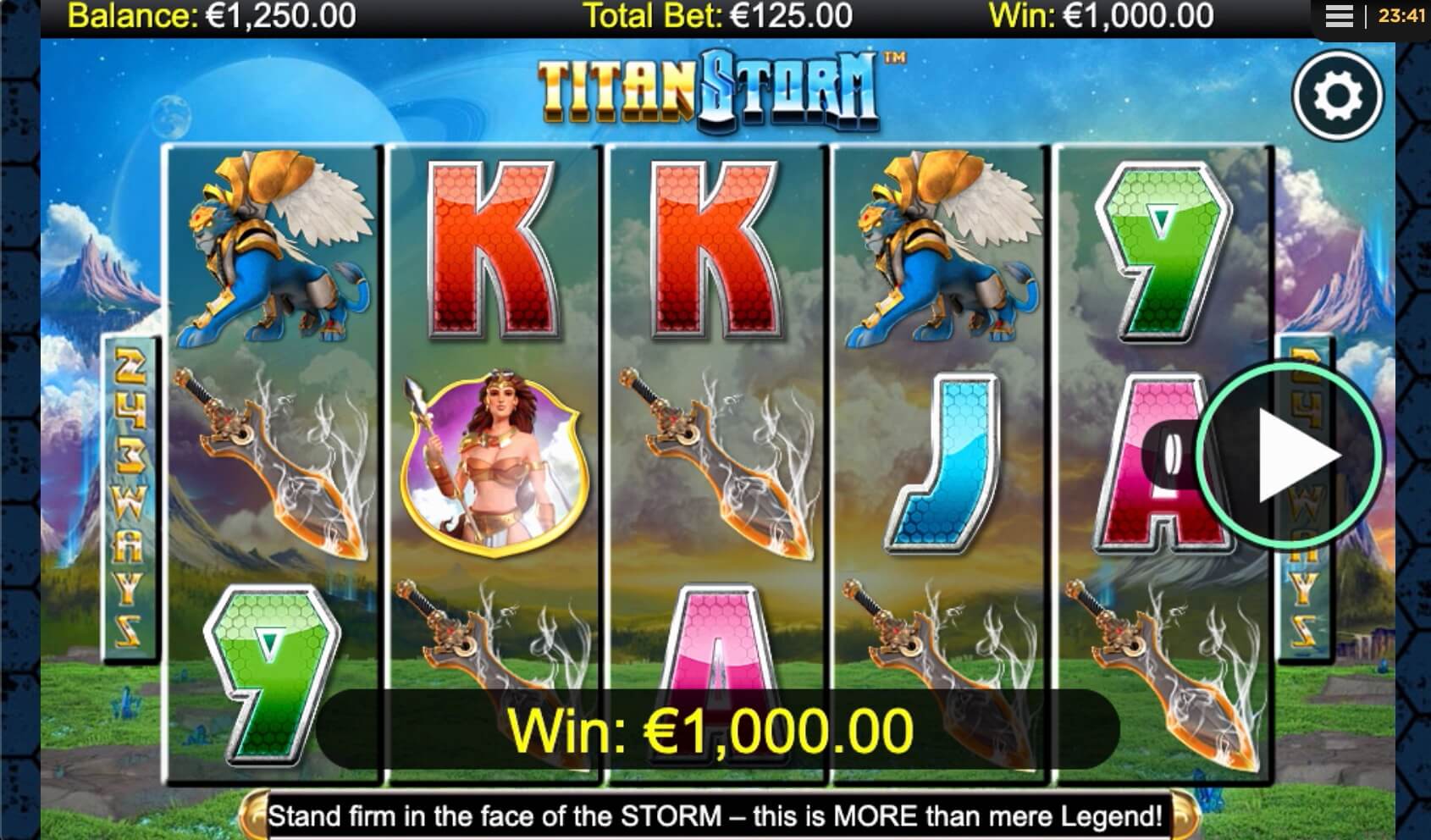 They merged the spin and the betting buttons. So now, if you want to adjust the wager, press on the coin icon next to the spin knob and set the bet amount as you want. At Titan Storm it might be from 0.01 to 20.00 per coin. As there are 25 coins per each spin, the minimal bet will be 0.25 and the maximum is 500. Suits fine, no matter how big your bankroll is.

We are not asking you if you like NextGen and their slots. Everyone likes them. They are simple, intuitive, nicely drawn, fair and filled with wins. Log in and spare some time on the Titan Storm slot, even if you are not into Ancient mythology. You will have great fun!