IGT’s Silent Movie is a tribute to the great era of silent films at the dawn of the film industry. Some of us do, and others don't remember the black-and-white films of before. So why don’t we use this awesome opportunity to recall them in this marvelous black-and-white slot.

The slot features 5x3 standard reel grid. There are thirty lines. You may bet from 1 to 300 coins per one. And thus, the total bet may go from 30 to 9,000 coins in a jiffy. Winning in the main game involves hitting a combo on one or several lines.

Remember, you may hit several winning combinations at one spin, their wins will be summed up and added to your account. All the winning combos start on the far left reel and comprise at least three tiles of one kind. 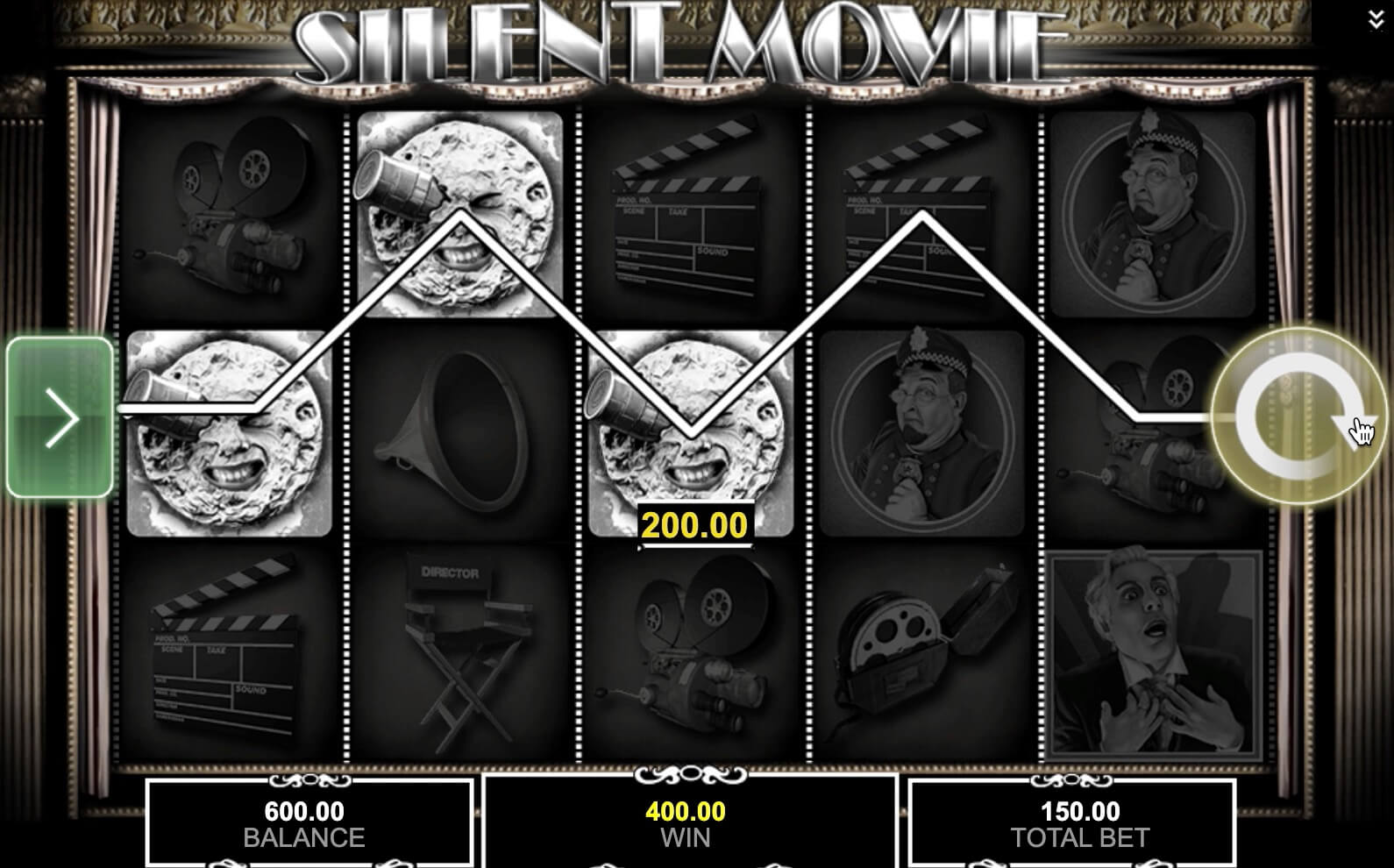 The tiles here are all themed. There are five lower hand tiles. The four of them: the Movie Reel, the Loud Speaker, the Director’s Chair and the Clapper Board have identical payouts: 100x for five, 20x for four, and 5x for three of one kind. The Film Camera stands out, it is paid 125x for the max combo.

The rest of the tiles are paid more, and all of them feature characters or recognizable scenes from several famous silent movies. The Keystone Kops’ tile is paid 300x. A Muddy Romance female character Mabel in an Alice band is paid 400x per five.

A tile with a moon with a Telescope from A Trip to the Moon is worth 750x for the set of five. The most expensive tile is a Dr. Jekyll character from the classic Dr. Jekyll and Mr. Hyde. It is worth 1,000 for five of one kind. All the wins are multiplied by the line bet.

The base game features five scatter tiles. Those are four icons dedicated to the aforementioned classic movies: Dr. Jekyll and Mr. Hyde, A Trip to the Moon, A Muddy Romance and Keystone Kops. If you hit any of those tiles in a combo of three, your total bet will be tripled. The last Scatter is a tile with Movie Tickets. All the scatter tiles are signed ‘Bonus’ and it’s not for nothing. But we’ll talk about it a bit later. 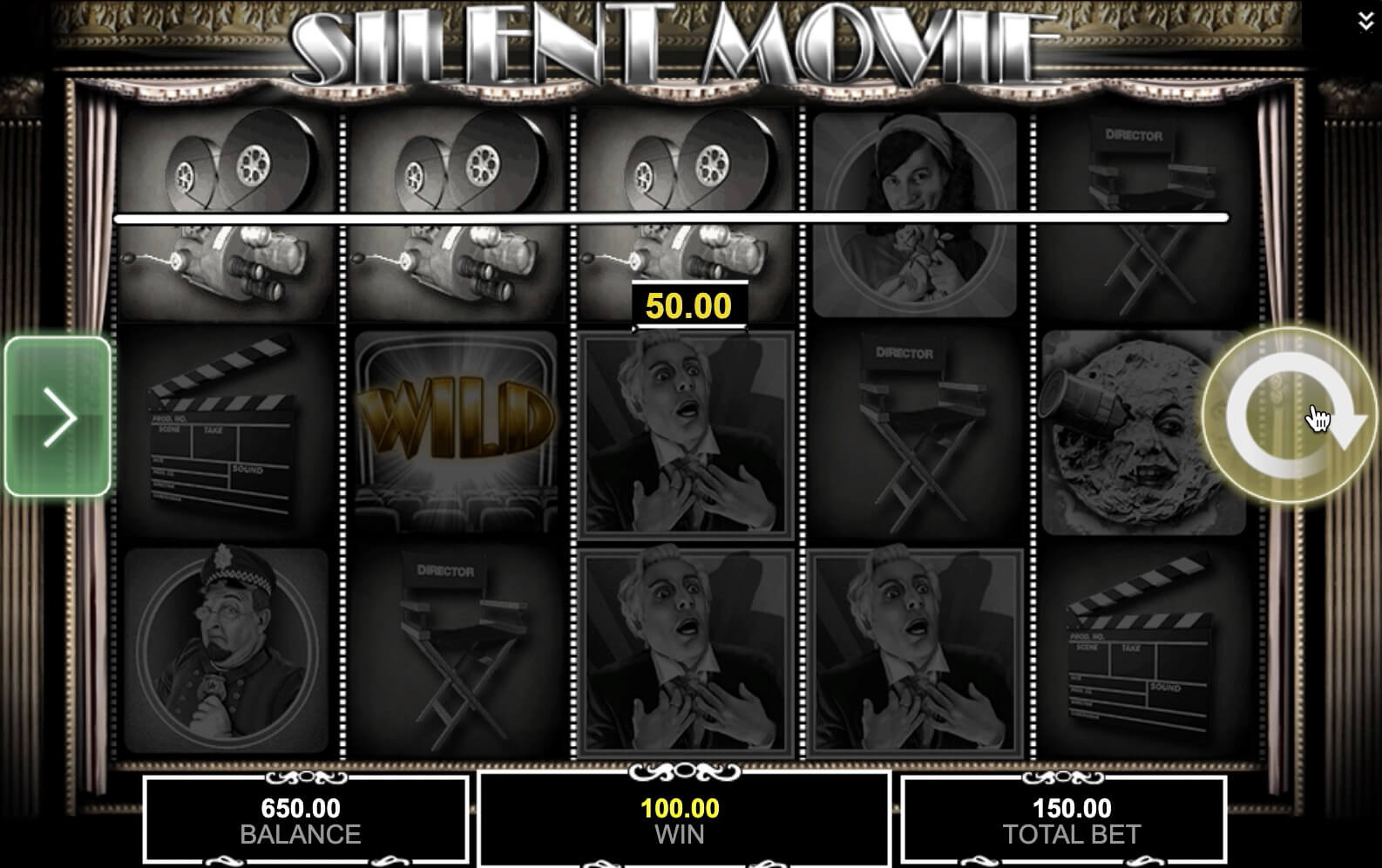 The wild of the base game is the Slot’s Logo in black-and-white. As always, it is a substitute that may replace any tile but other scatters. Don’t forget, there are five of them in this game. The Wild appears on any reel, but the first one. If you hit a combo of two Movie Tickets and one of the themed scatters, you will initiate the Bonus game. If this third tile is Dr. Jekyll and Mr. Hyde’s one, then there will be the Dr. Jekyll and Mr. Hyde’s bonus game.

The bonus game is a free spin round, and it is played on a separate set of reels. For Dr. Jekyll and Mr. Hyde’s bonus you will have reels with 10s, Jacks, Queens and Kings, each worth 100x for the five set combo. Five Aces will be paid 125x. Then there are four themed icons.

The tile with Potion is paid 300x for five. The tile with a female character is paid 400x. Mr. Hyde’s tile is paid 750x for five. And Dr. Jekyll is the most expensive tile paid 1,000x for the max combo.

All the wins are once again multiplied by the line bets. And there are three bonus tiles in the round, the Movie Tickets tile is the scatter, while the Jekyll and Hyde combo tile and the Game’s Logo are the wilds. 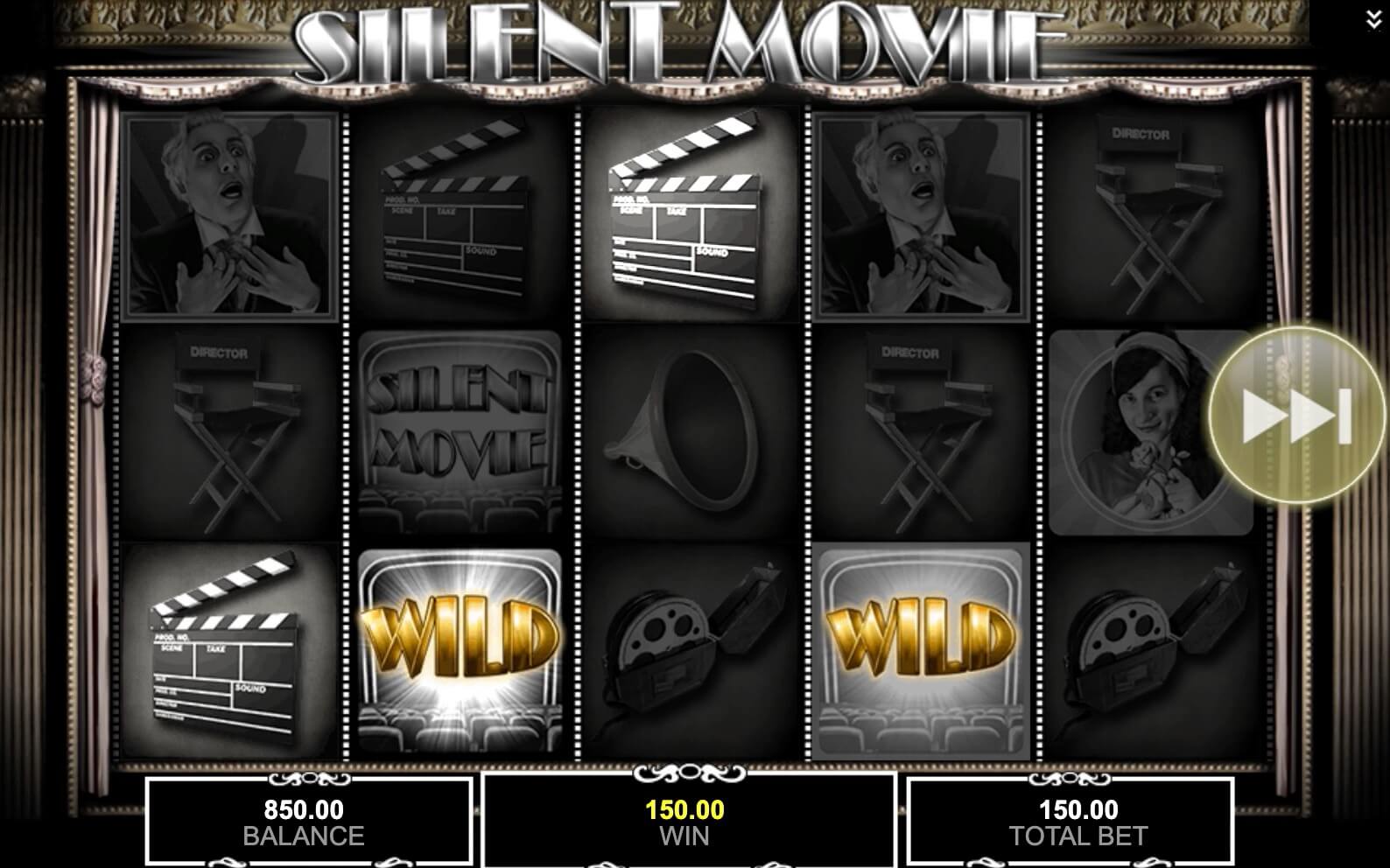 The Tickets tile pays three times the total bet and adds extra free spins. The first Wild of the round is the same as in the base game — it’s the Slot’s Logo. It replaces any tile but other scatters and appears on the reels from the 2nd to the 5th. The second Wild is the Combo Tile, and it replaces Jekyll or Hyde’s tiles.

It appears on any reel, but the first one as well as the other wild. For the bonus round at Dr. Jekyll and Mr. Hyde, you will be given from 3 to 6 spins. The exact number depends on how many winning spins you will get as the winning spins decrement the total free spins’ number.

The second bonus feature is A Trip to the Moon. It is initiated by two Movie Tickets and one A Trip to the Moon Bonus tile. It’s also a free games’ feature like the previous one and its reels are also different. Its tiles and payouts are almost the same as for Dr. Jekyll and Mr. Hyde's round, but the themed icons are obviously unique. There are two peculiarities.

First, the payouts for the most expensive tile are two times higher than for the highest paid tile from the previous game: the five-tiles combo is paid 2,000x the line bet. The second difference is that the second most expensive tile with a male character from the film appears only on the 1st reel. 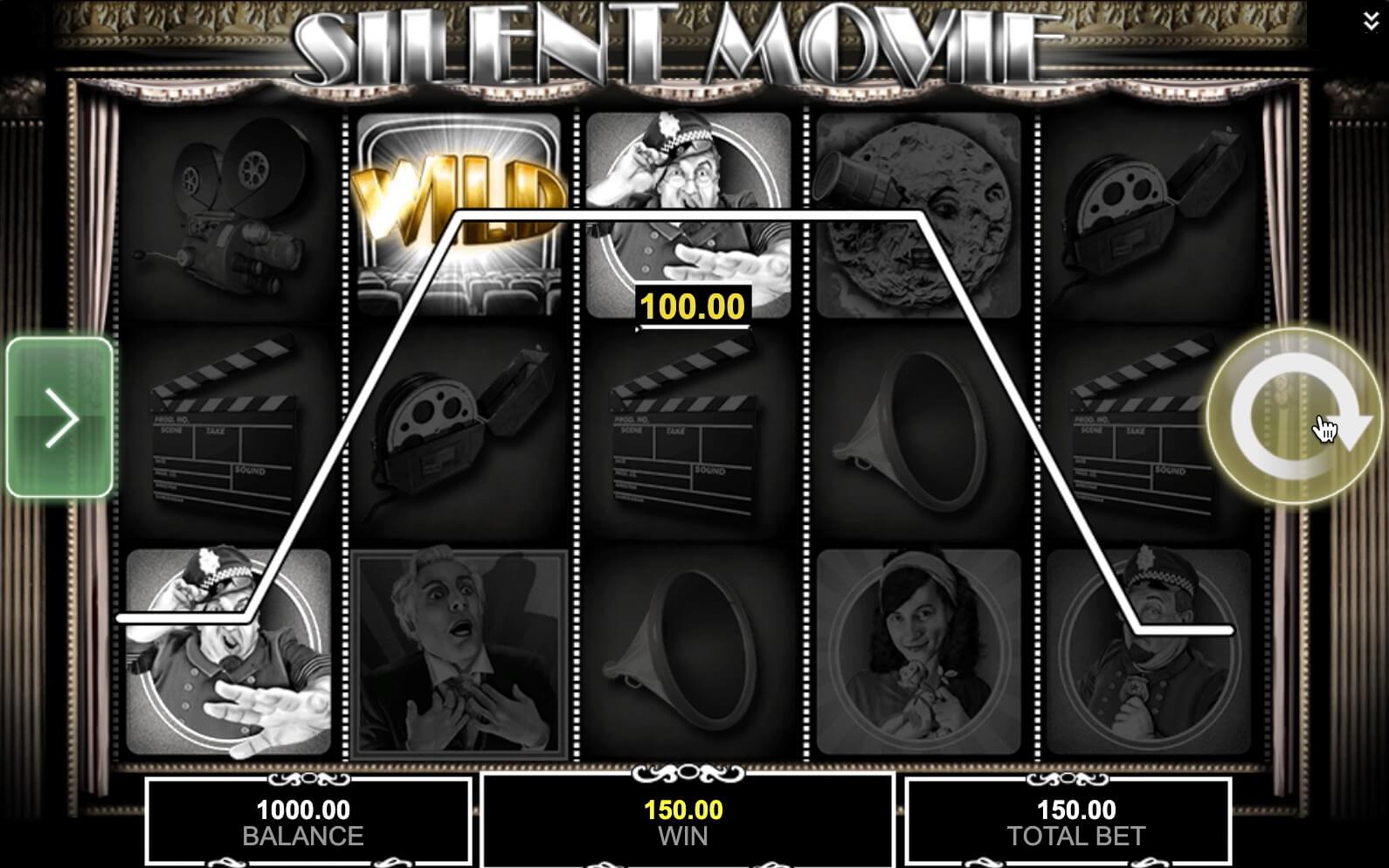 Its payouts are the same as in the payouts for the 2nd most expensive tile from the aforementioned round though. There are from 10 to 15 free spins at this bonus round. There are two wilds in this round: the Logo and the tile signed ‘Wild’. They both appear on any reel, but the first one, and take place of all symbols except the tile with Movie Tickets. Three Ticket tiles triple the total bet and award you with more free spins.

The third variant of the bonus game is A Muddy Romance round. It is triggered just like the two we have already mentioned, but the third triggering icon should be A Muddy Romance one. The payouts are identical, the only difference is in the themed tiles.

Those are themed after A Muddy Romance film, obviously. You get from 6 to 12 free spins in this game. Also, there are some unique perks, like scatter wins, that are different from the aforementioned bonus games. The feature has three scatter tiles: the Movie Tickets, the Logo and Mabel, the main character of the movie. The Movie Tickets triple the total bet for the set of three, just as before. But Mabel and the Logo-tile have more winning potential. 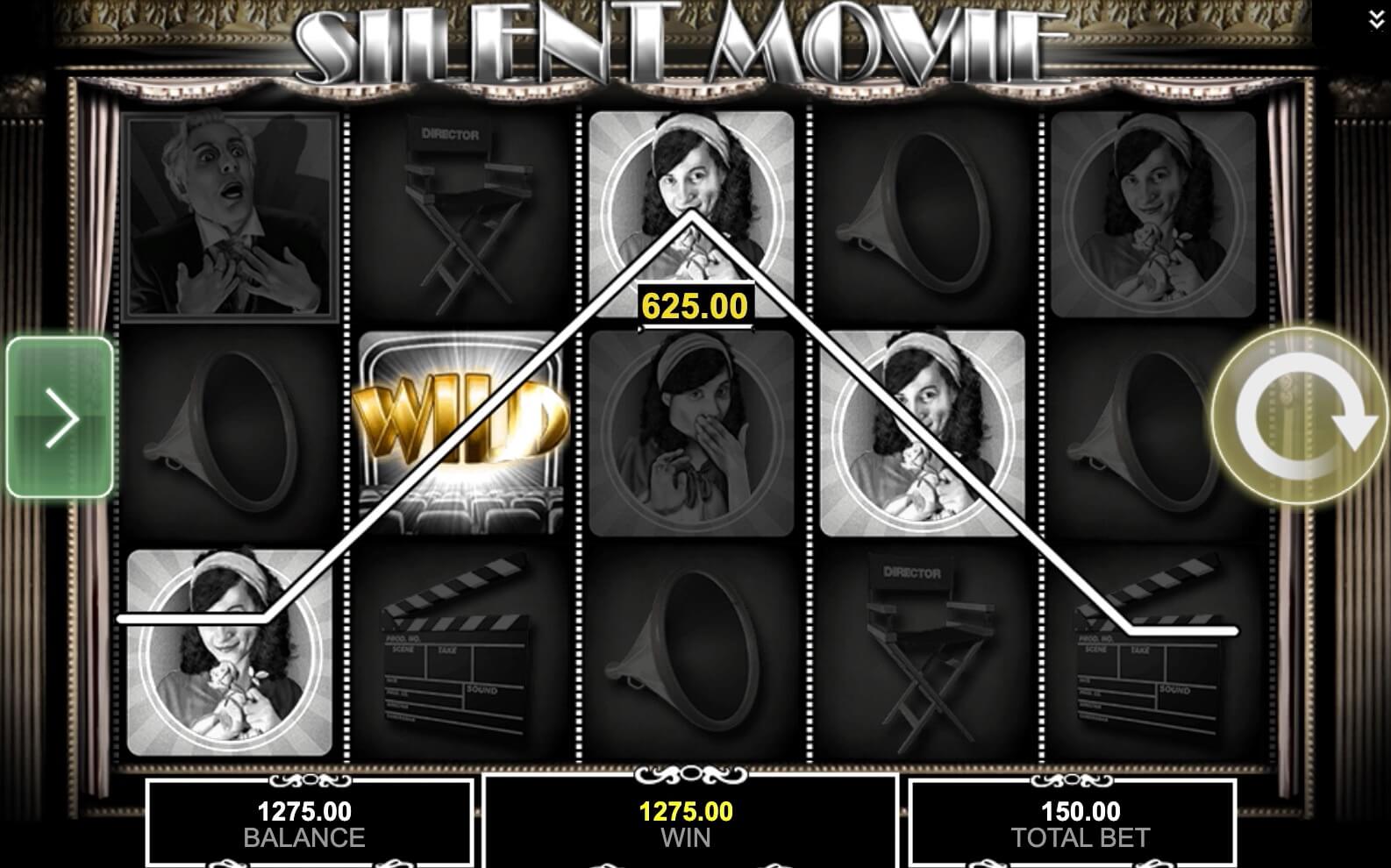 The last bonus round is the Keystone Kops’ themed one. The basic idea is the same: free spins on a different set of reels. Here the themed icons will be different, though the payouts are the same. You will be given 10 free games with 2x — 5x multipliers each. The wild is the tile with the game's Logo that appears on any reel but the first one and replaces any tile but the scatter. The scatter is the Movie Tickets. They are paid 3x the total bet for the set of three and also reward you with 10 extra spins.

Silent Movie Slot is a real piece of work. Its idea is exceptional, and the design is outstanding. We haven't seen such an elaborate bonus game before, you may have our word for it. Is the slot worth spinning? Sure, it is, for crying out loud. It doesn’t really matter if you like silent moves or not. You are going to be mad about the slot, anyway! Don’t waste your time, log in and spin the Silent Movie slot. But be advised, it’s addictive!