Shields of the Wild

Shields of the Wild: Come And Get Them!

It seems like Shields of the Wild are set in the Medieval times. Or before. If the time is uncertain, the topic is. As the Shields of the Wild slot is a military themed one. It’s for those who will gladly join the battle for his king or for the county or for more mundane reasons like money or power.

The battle that is about to begin is what we see on the background of the reel-screen. This first-person view is actually captivating. It looks as if you along with your fellow warriors are going to strike soon. 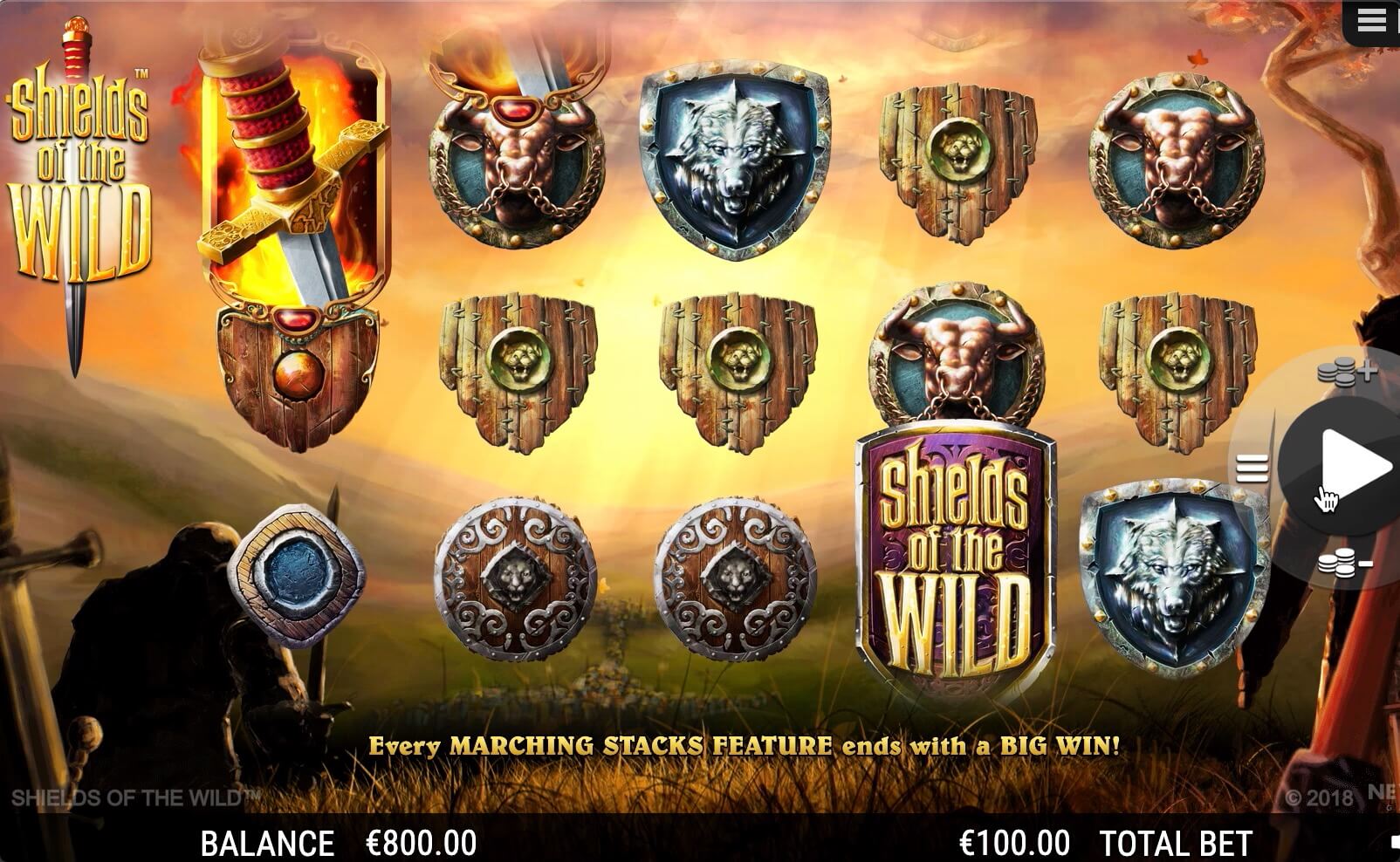 You even see the enemy troops waiting for you somewhere ahead. But your chances are higher, as you hold the higher ground. The design is absolutely gorgeous, though! As well as animation: flying birds and falling leaves look fantastic.

The gameplay of the slot is rather simple and standard too. There are five reels and three rows. That’s the most standard layout one can get in a slot. But as for the lines, there are only 10 of those. Whether for good or for worse, you have to decide for yourself. 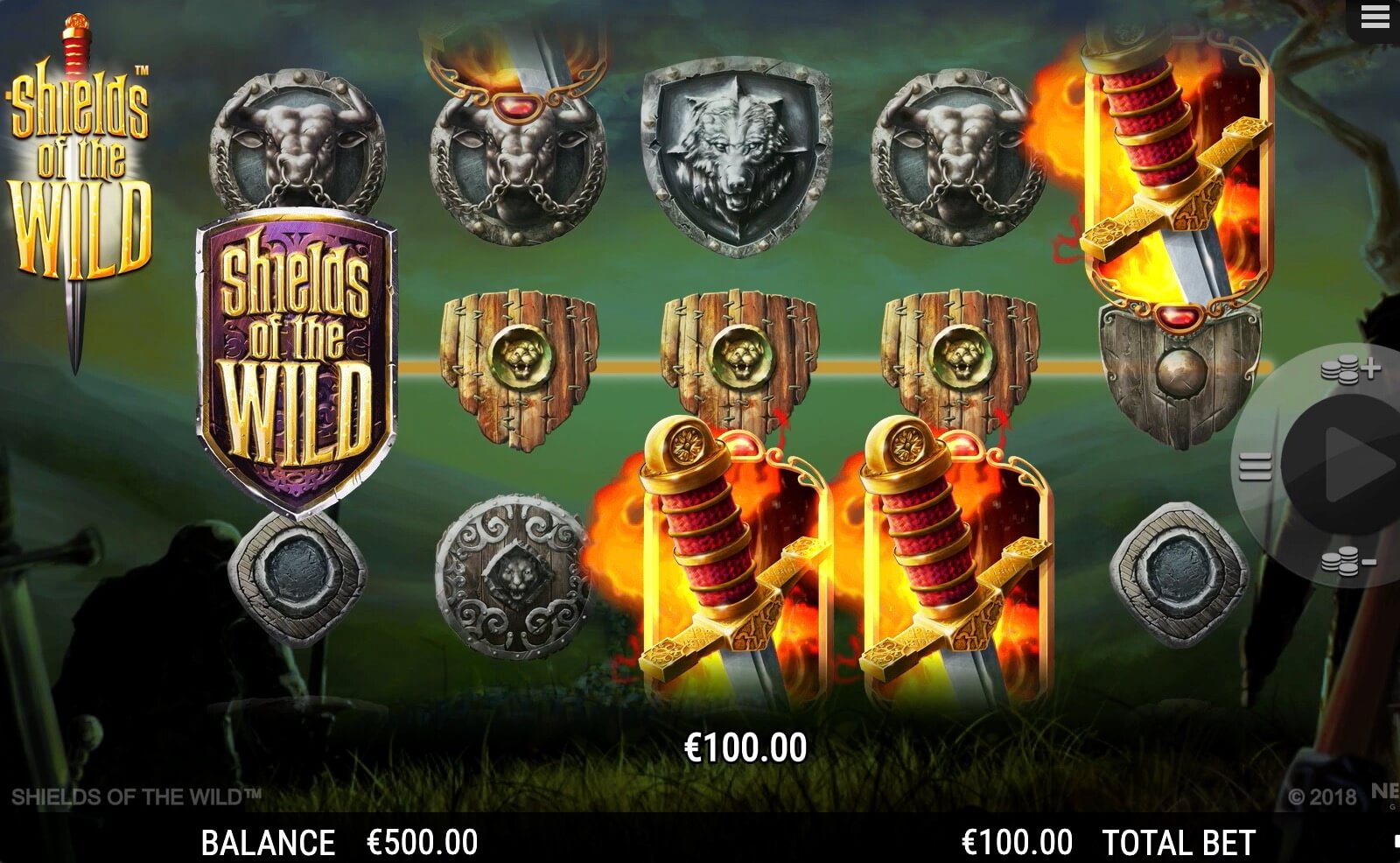 The betting is pretty simple here. One can manipulate with the total bet only. By the way, it goes from 0.10 to 100.00 per spin. The line wins are figured out by multiplying them by the value of one coin.

To win, land a combination of identical tiles on a line. There may be several wins at one spin, obviously, and they will be summed up. All the combos have to start on the first reel from the left. And there have to be at least three tiles of one kind in a combo. The tiles are all themed and they are all shields.

Guess you now understand why the slot is called the Shields of the Wild. So we have eight shields for tiles: four are the low paid wooden ones and the other four are made of metal and look far more sophisticated. The five wooden Shields with a blue circle inside are paid 20x.

Five wooden Shields with a small animal emblem inside will be paid 25x. The same number of Shields with a Red Sphere are worth 30x. And finally, the round Shield with Metal Ornaments are paid 40x for the set of five. 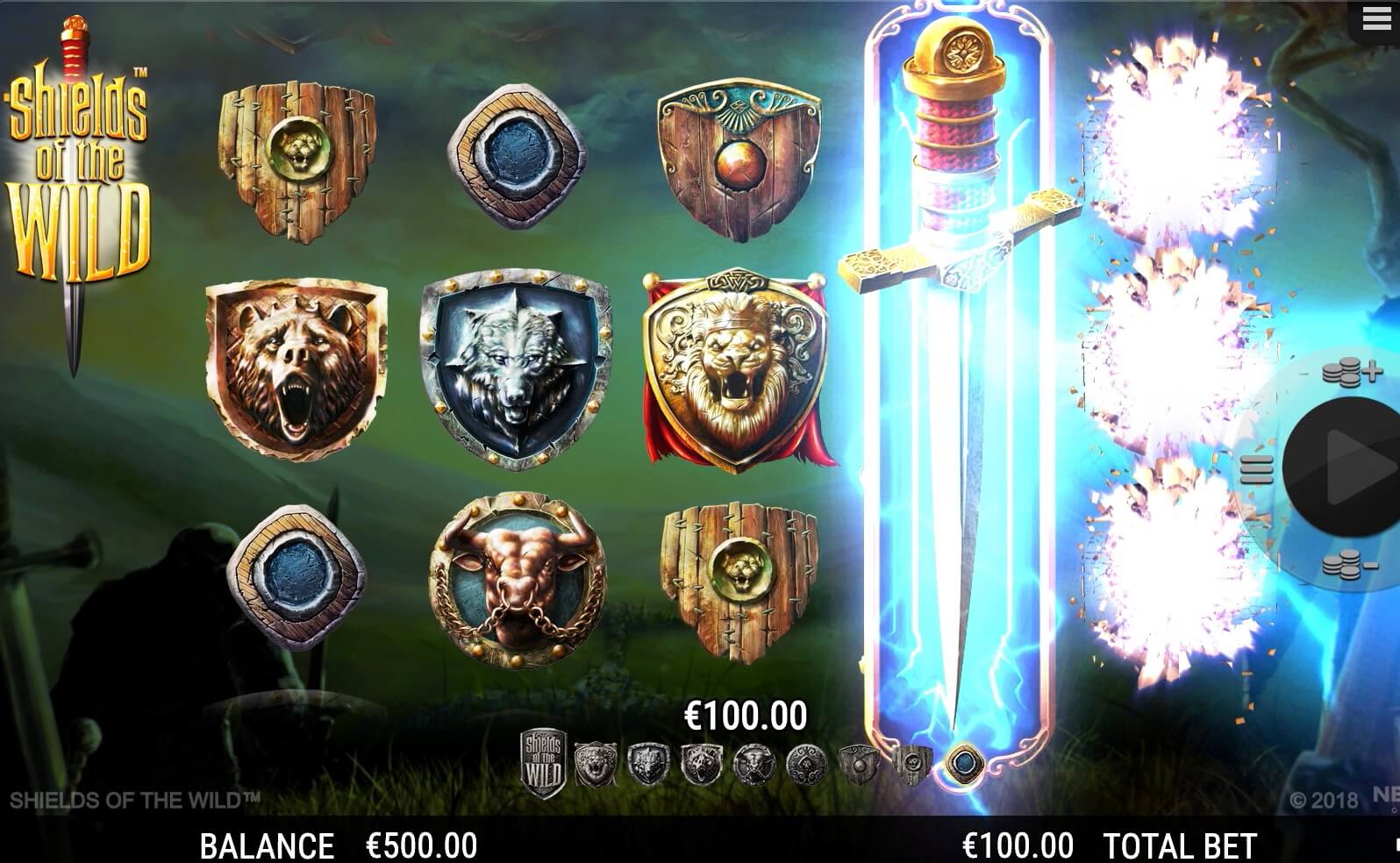 The other four tiles are the metal Shields, and they are paid more. The max combination of Bull Shields is worth 50x. Five Bear Shields will be paid 60x. The Shields with a Tiger are paid 75x for five. And the last but not the least, the Shield with a Lion is worth 100x for the set of five of one kind.

As for the bonus features, there are plenty of them at Shields of the Wild. And there are three paytiles that initiate them. First goes the Wild. It’s a logo of the slot and it may also form combinations. The max combo of five will be paid 250x the wager.

Also, the Wild is a substitute for any tile but other scatters. The Wild triggers the Shield Wall Feature. It may be activated after any spin and during this bonus game all the tiles except for the Scatters are upgraded to the next higher paytile.

So the Tiger Shields become the Lion Shields. This upgrade may happen for up to eight times. The total wins for the round are awarded after it is over, and after are added to your account. 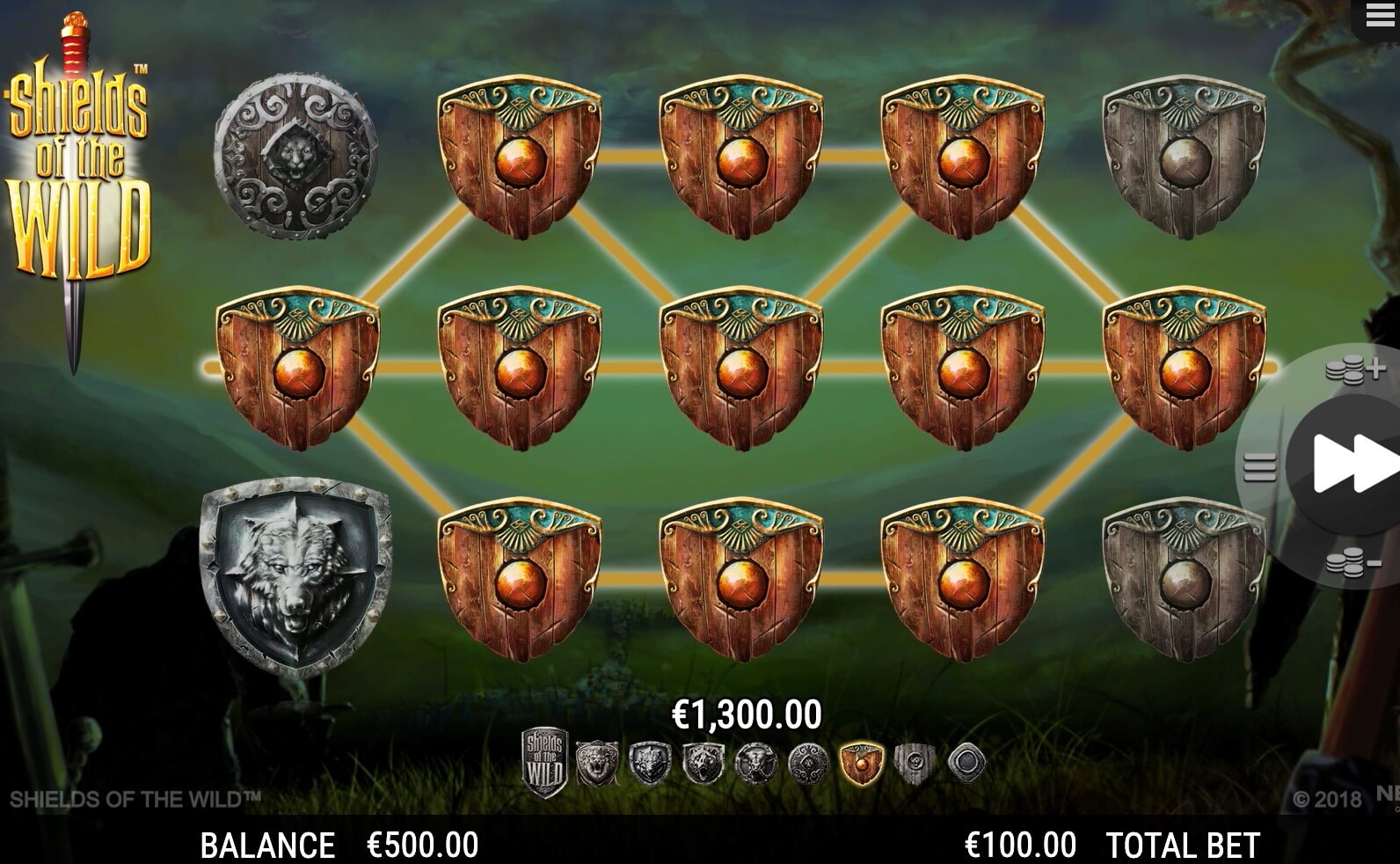 The Scatter is a tile with a Sword’s Handle, and it triggers the Marching Stacks Feature if you hit three tiles in one spin. There are actually two Scatter tiles in the game. The regular one has the red background. The Scatter with the same Sword’s Handle but against the blue background is an Upgraded Scatter, and it may upgrade your tiles for the Marching Stacks Feature.

So what is the Marching Stacks Feature? It’s a bonus game when the last of the reels becomes stacked. What tile is chosen for a stack depends on the number of Scatters you have hit to initiate the game. If there were only 3 scatters, then the stacked tile is chosen from the lowest paid wooden Shields and the Bull Shield. 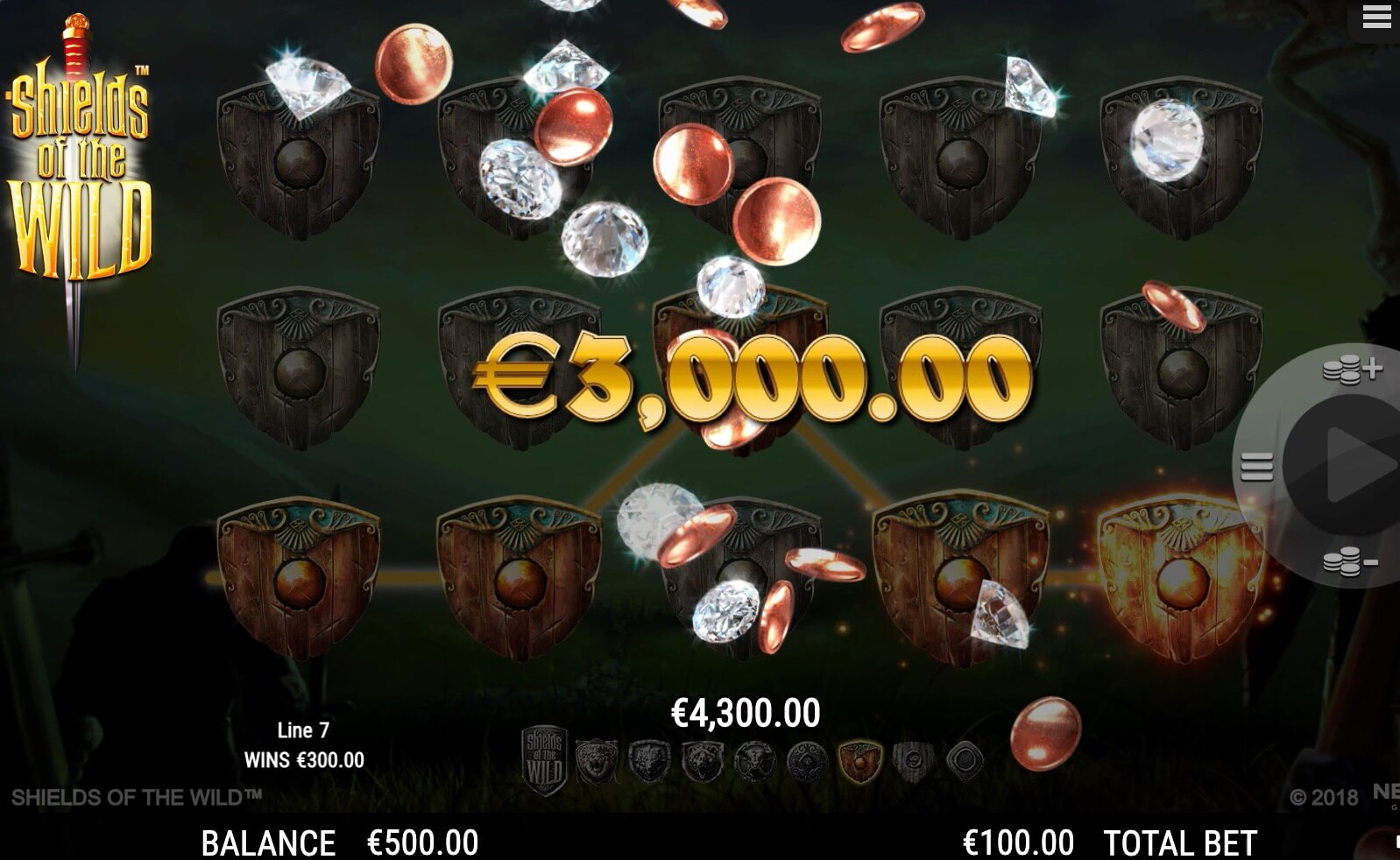 If you had four scatters to trigger the feature, then the choice would be made between three wooden shields, except for the cheapest one with a blue decoration, and two animal-ornamented shields: the Bull and the Bear ones. In case you managed to hit five Scatters, then the stacked reel would be chosen from the two most expensive wooden Shields and all the animal decorated Shields with a notable exception of the Lion Shield.

The Stacks Feature is a rather complex one. The way it develops depends on whether you hit the upgraded scatter or not. If you don’t hit the upgrade, then the stacked reel expands one reel to the left. And both reels have identical stacks. 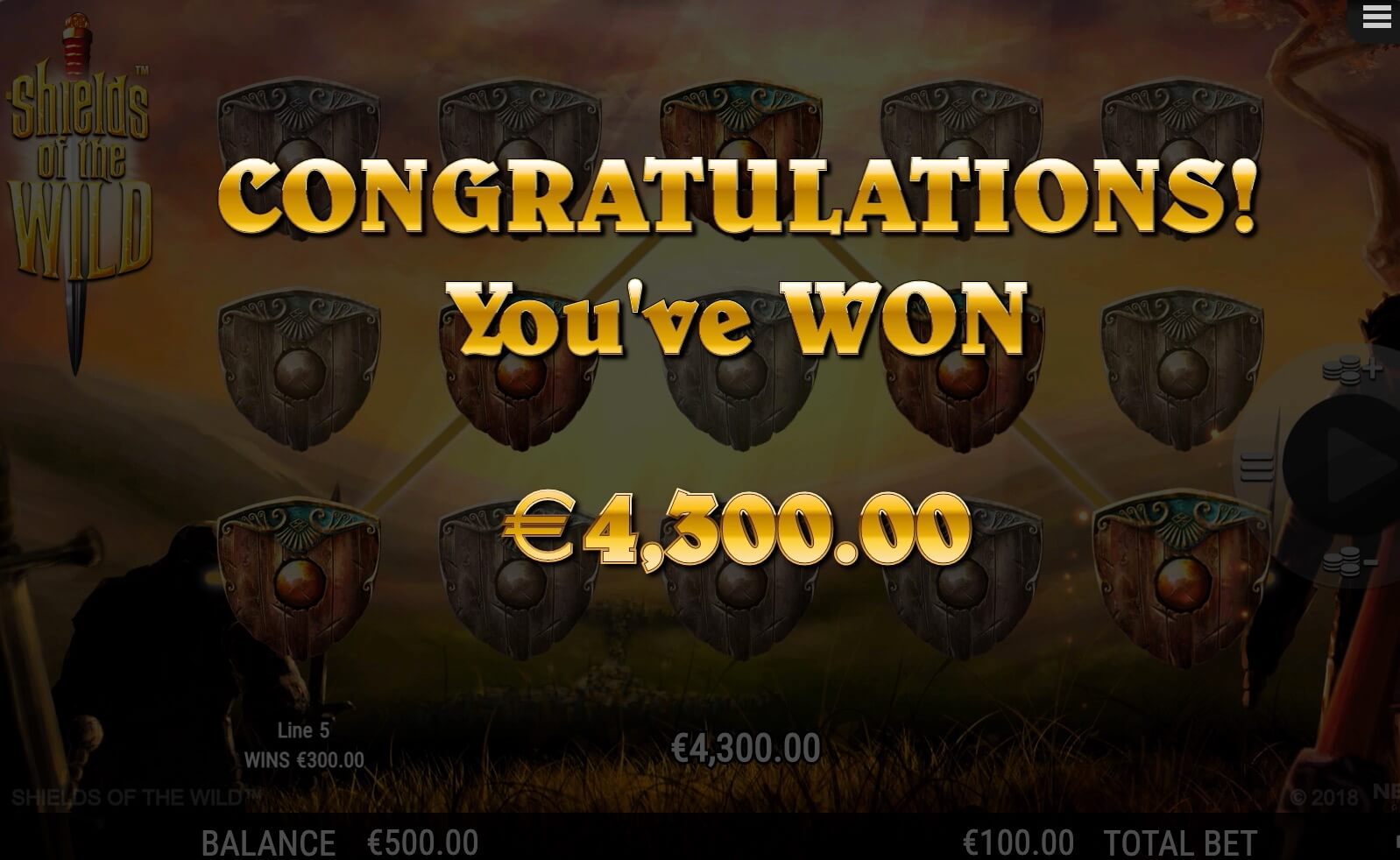 Shields of the Wild impressed us a great deal. Technically, the slot is perfect. Its animated design is mind-blowing. Though the tiles are rather dull and hard to tell apart sometimes. As for the users’ interface, it is simple and intuitive: only a few buttons that makes navigation extremely easy.

Some may find this militaristic idea not so appealing. But in fact, NextGen handled it with integrity and tact. As for the wins, the regular gameplay ones don’t seem striking, but bonus feature’s odds seem pretty neat. So enjoy the battle. Hope your loot will be grand!

Secret of the Stones