The Land of Wins

There are plenty of slots inspired by the Orient culture! That seems like a popular theme, and the slots are in high-demand. There are also plenty of slots about Shangri La. Today we’ll take a look at the slot by Nextgen.

Nextgen’s Shangri La is just like any other slot on the outside. It features 5 reels and 15 lines. The basic idea is quite ordinary: spin, land combos on the lines and get winnings. All the combinations have to start on the leftmost reel to become winning. The minimal size of a combo varies from 3 to 2 tiles of one kind. 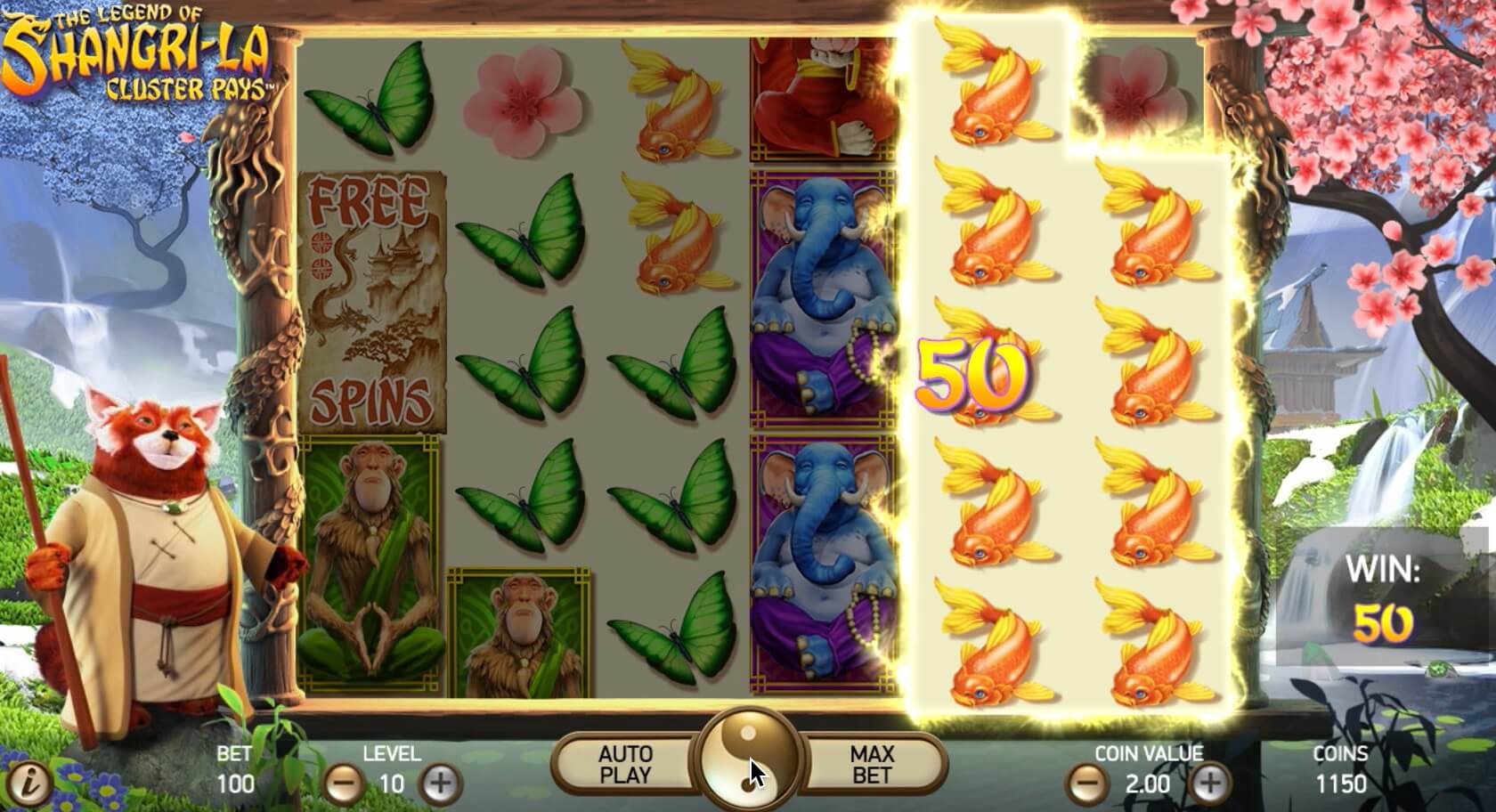 Speaking of tiles, there are two kinds of icons available. The card-borrowed icons are the symbols of the card suits, and they are relatively low paid. The Spades and the Clubs are paid the same: max combos are worth 60x the bet. But the Hearts and the Diamonds are even yummier: 80x the bet for five of a kind each.

Other tiles are themed, thus, we have the Dagger that is worth the same as the Hearts. Also, five Lotus tiles are paid 100x, and the Temple is paid 150x for five. All the aforementioned tiles have a minimal combination of three of one kind. The rest of the icons have minimal combos of two icons only. 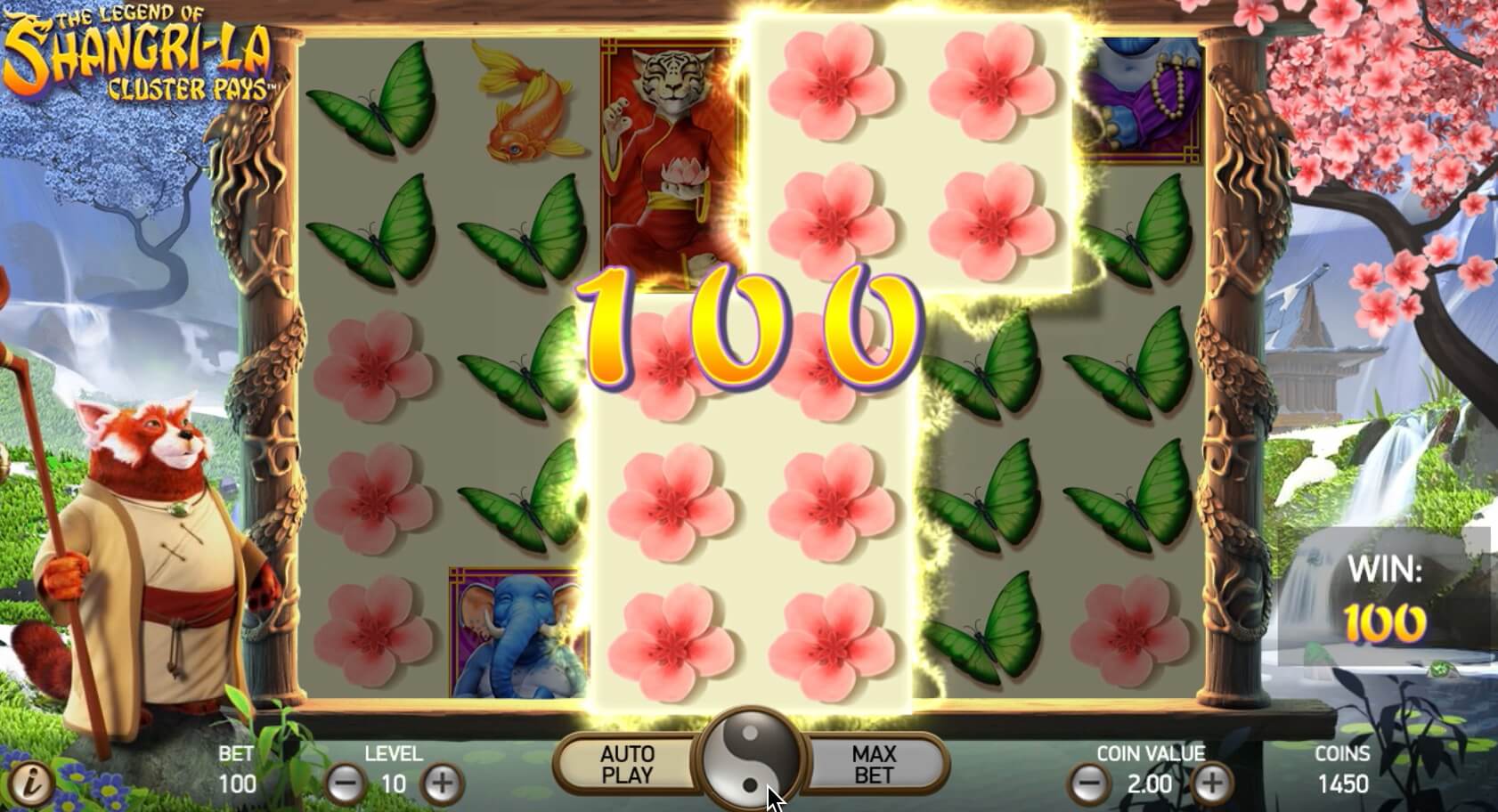 Among them are the Elephant, paid 150x for the five and 1x for the two, and the Rhino, which is worth 250x for five and doubles the bet if you hit two. Another tile is the Tiger. The max combo of five will be paid 500x the bet, while the minimal combo is worth 2x the bet. The Tiger is actually the highest paid tile in the slot.

The regular tiles are done with and it’s the time for the bonus-loaded icons. There are two of those: the wild and the scatter! The classic combo with the classic perks, actually, is what we have in Shangri La. The Wild is a tile with a long-haired brunette Girl. This tile substitutes all symbols but the scatter. It appears on the middle reels only and if hit in a combo, doubles the payout. 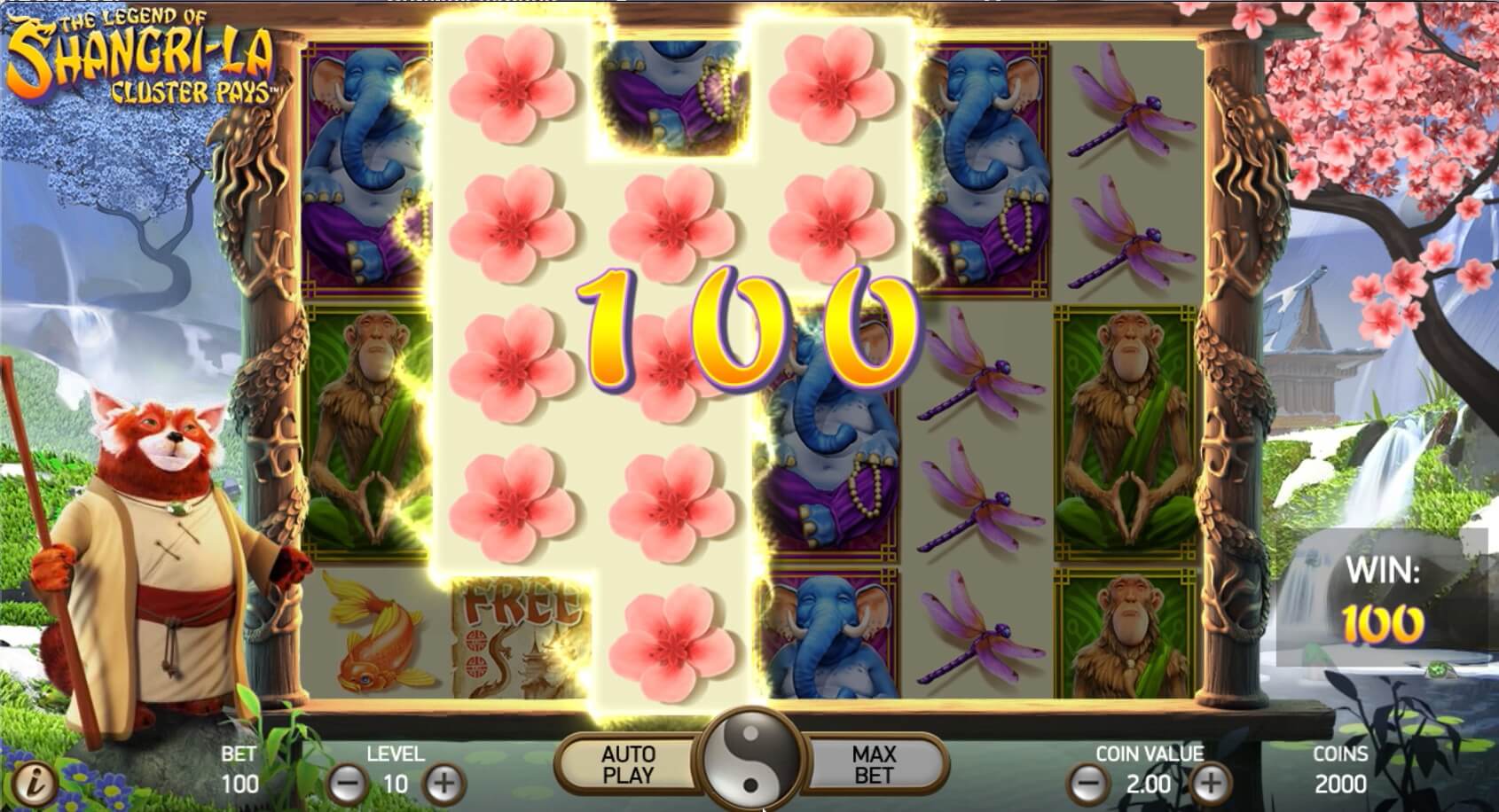 The Wild comes with two extra perks. First is the Additional Wild. It means that you may get extra Wilds at any spin. It’s a random feature, and it is not connected with your bet size or anything of the kind. As far as we understood, at least.

Another nice extra is the Wild Reels feature. When it is activated, one or more reels may turn into the stacked wild reels. There are only 2nd, 3rd and 4th reels that can do it, actually, but the feature adds to your odds nicely, right? 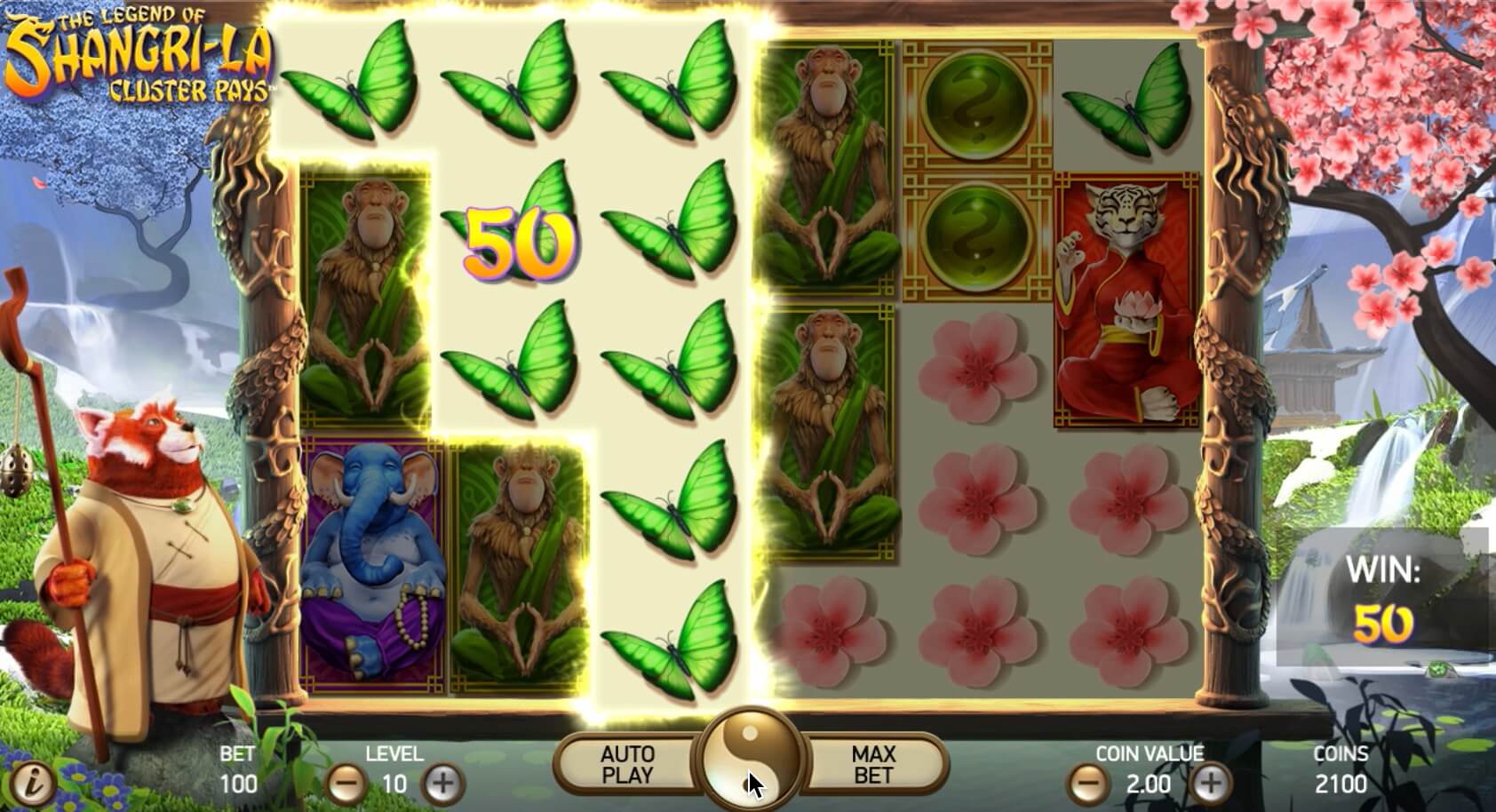 Another tile with benefits is the Scatter. It is an icon with a Golden something which reminds us of a Vase or an Urn. We might be wrong, though as there are no people with relevant experience in the Eastern culture studies among the crew. But anyhow, the tile with golden something is awesome.

Hit a combo of three of those and get 60x payout. For the five of a kind combo you will have 3,000x win. But the best about those wins is that they are multiplied by the total bet instead of a line ones. Also, they are paid either way! 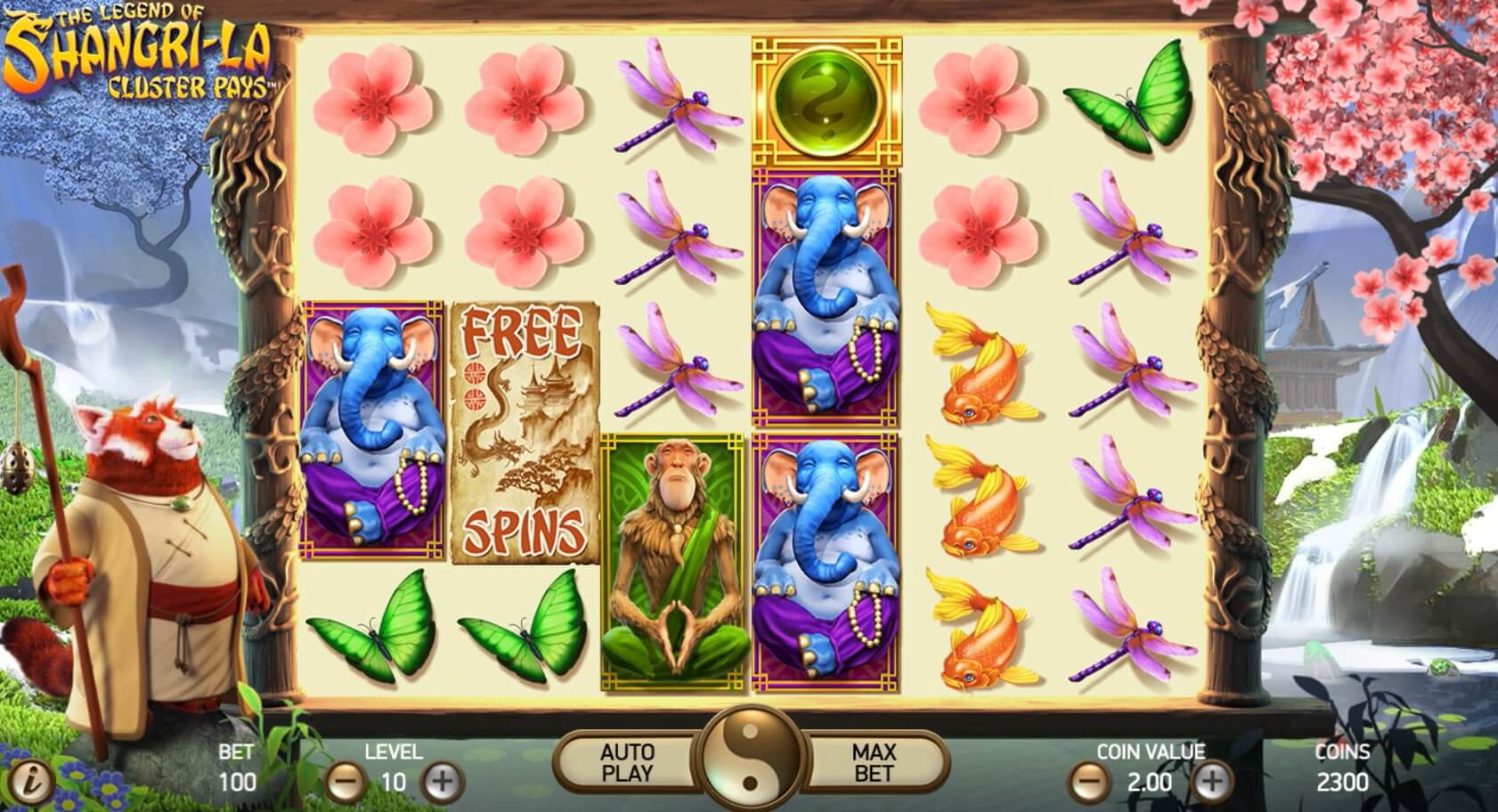 Scatters are great in one more way: they are loaded with extras. In any spin, you may get some extra Scatters added on the reels. This Added Scatter Feature does magic to your odds! Another feature with the Scatters is called simply the Feature. The name is barely creative, but the feature is nevertheless hot. Hit the three Scatter tiles on the reels at one spin and get yourself a nice little Bonus Wheel.

The wheel contains four types of prizes. The first one the Free games. So you will get 8 spins on the house at the bet of the triggering spin and with a chance to re-trigger. The second prize option is the Super Free Games round. There will be 12 spins for free with a Wild Reels feature on one of the reels. 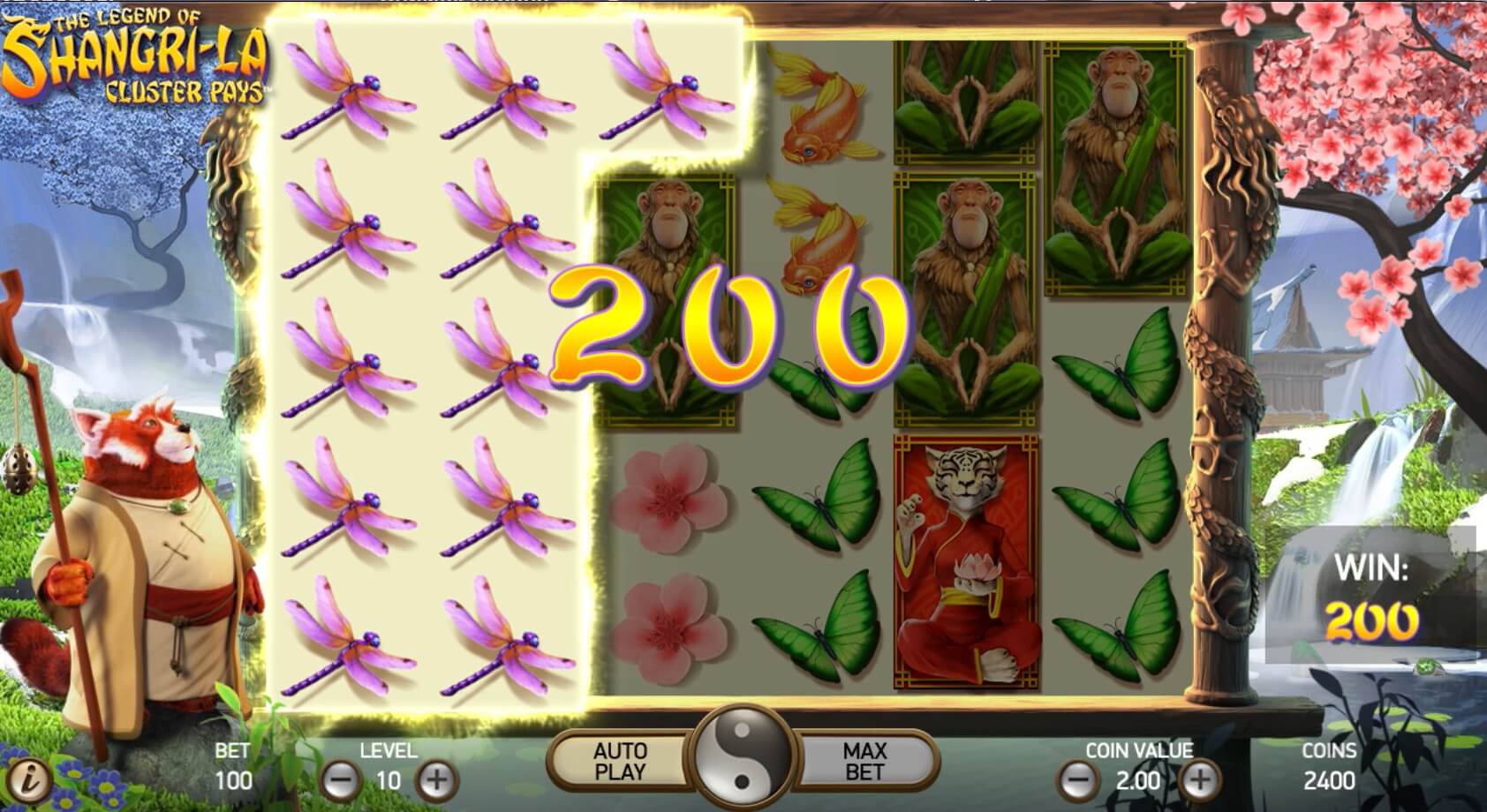 This feature is also re-triggerable and played at the bet of the triggering game. The third bonus option is the Chest Bonus. It’s an interactive game where you have to pick chests. You may go on until you hit the max win, which is 15x the total bet, or you hit the chest with a trap. After the feature is over, you return to the main mode to go on with your regular game.

The fourth prize on the wheel is the Trail Bonus. It’s also an interactive feature. But here you have to move along the trail on the map full of treasures. First you spin the wheel to figure out how many steps you are allowed to take and then you make your move. All the prizes collected along the way are added to your account. You may win up to 100x the total bet during this feature. 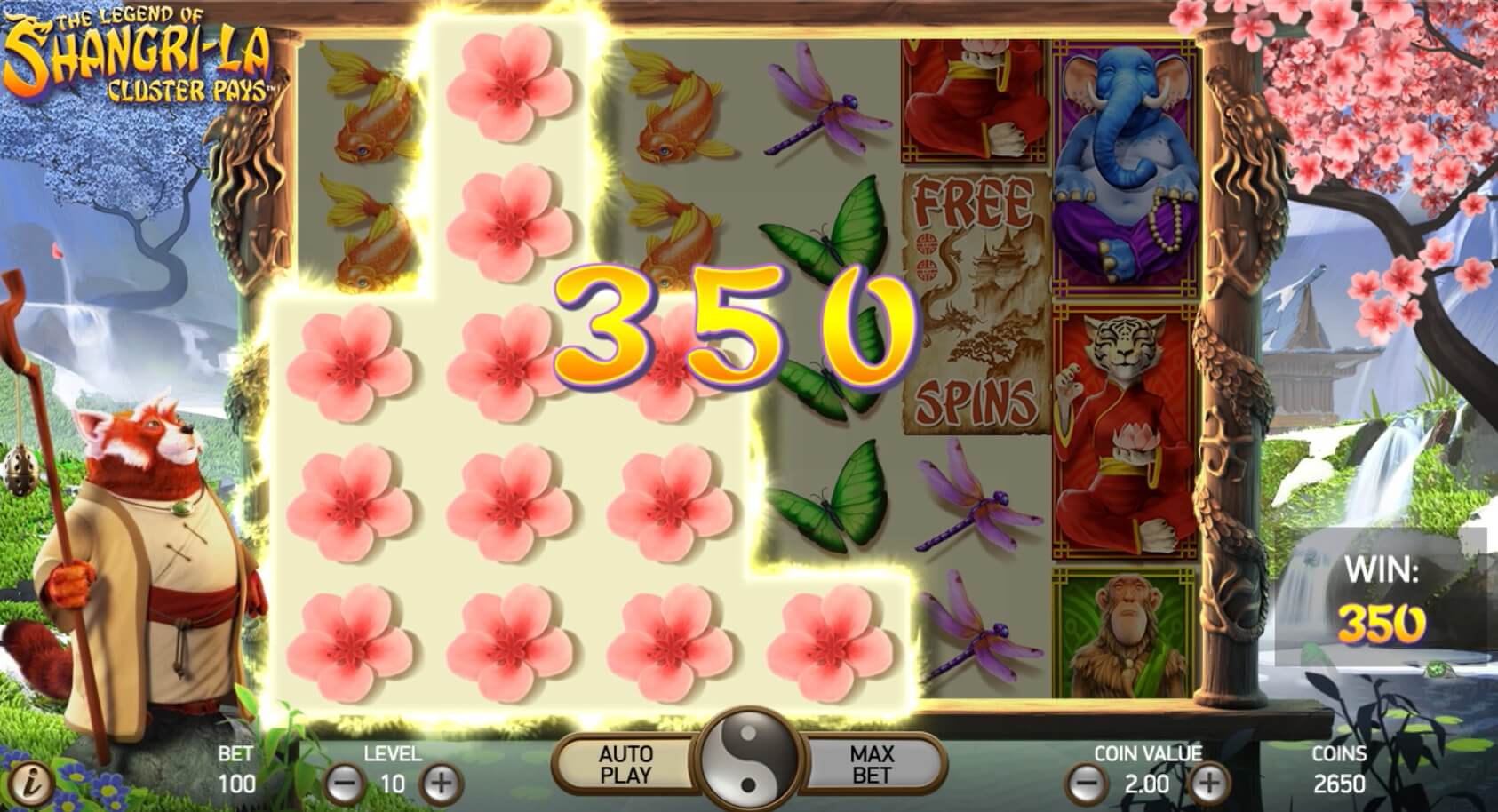 Whether you believe in a fantasy land Shangri La or not, it looks like it believes in you! In all of us, to be exact. Otherwise, how could we get such a great slot available for spinning 24/7?! It’s hot, full of options and excitingly enthralling. Why go to the mountains in search of the promised land? Log in and get all you want in just one spin!