Are you into rock? We are. But the rub is, there aren’t many hot rock-themed slots on the market. At least so it was before IGT introduced its Shamrockers. Guess it’s quite clear from the name that this game is not only about rock, it’s also about Ireland. So, we get an Irish-style rock slot in total. It’s a bit more than we have expected. Let’s figure out if it is a good combo.

Shamrockers features 20 lines and 5 reels. The lines are fixed. So to make a bet you can adjust the line wager only. IGT offers a minimalistic layout for its slots, so to fix the bet you need to click on the arrow icon on the left side-bar. 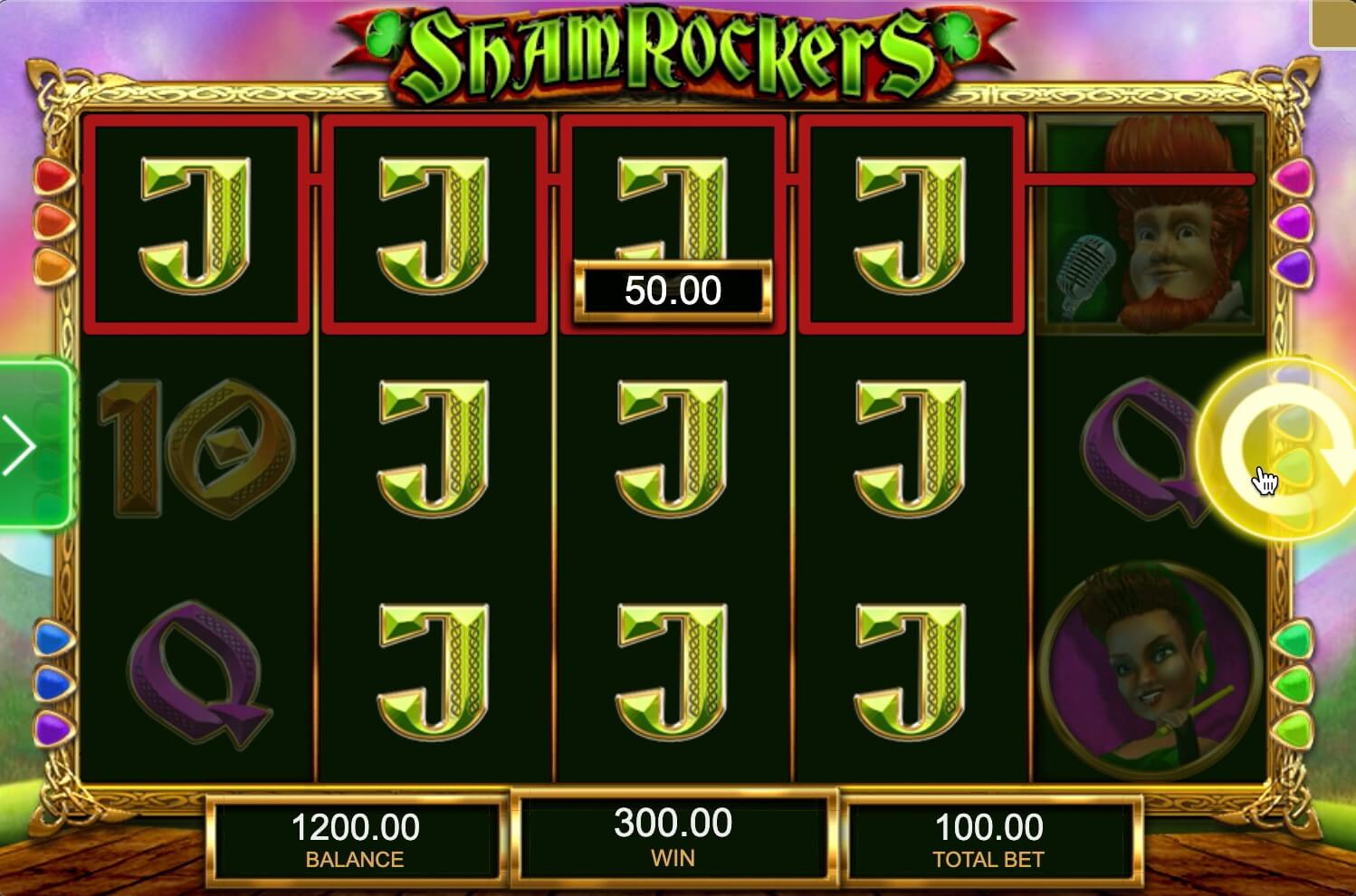 The pop-up window with the ‘+’ and ‘-’ buttons will appear. There you will be able to decide what line bet you are up to. The range is rather big, but trust us, high-rollers would really appreciate it. The minimal bet is 1 per line and thus 20 per spin. The tops are 1,000 per line and 20,000 per spin. We told you!

The gameplay of this slot is just like in any other game. Slots are played to win money. To hit a win, one has to hit a winning combo on a line first. All combos have to start on the 1st reel from the left. There has to be from 3 to 5 tiles in a combo. Speaking of tiles, there are five card-borrowed symbols and four authentic slot icons. 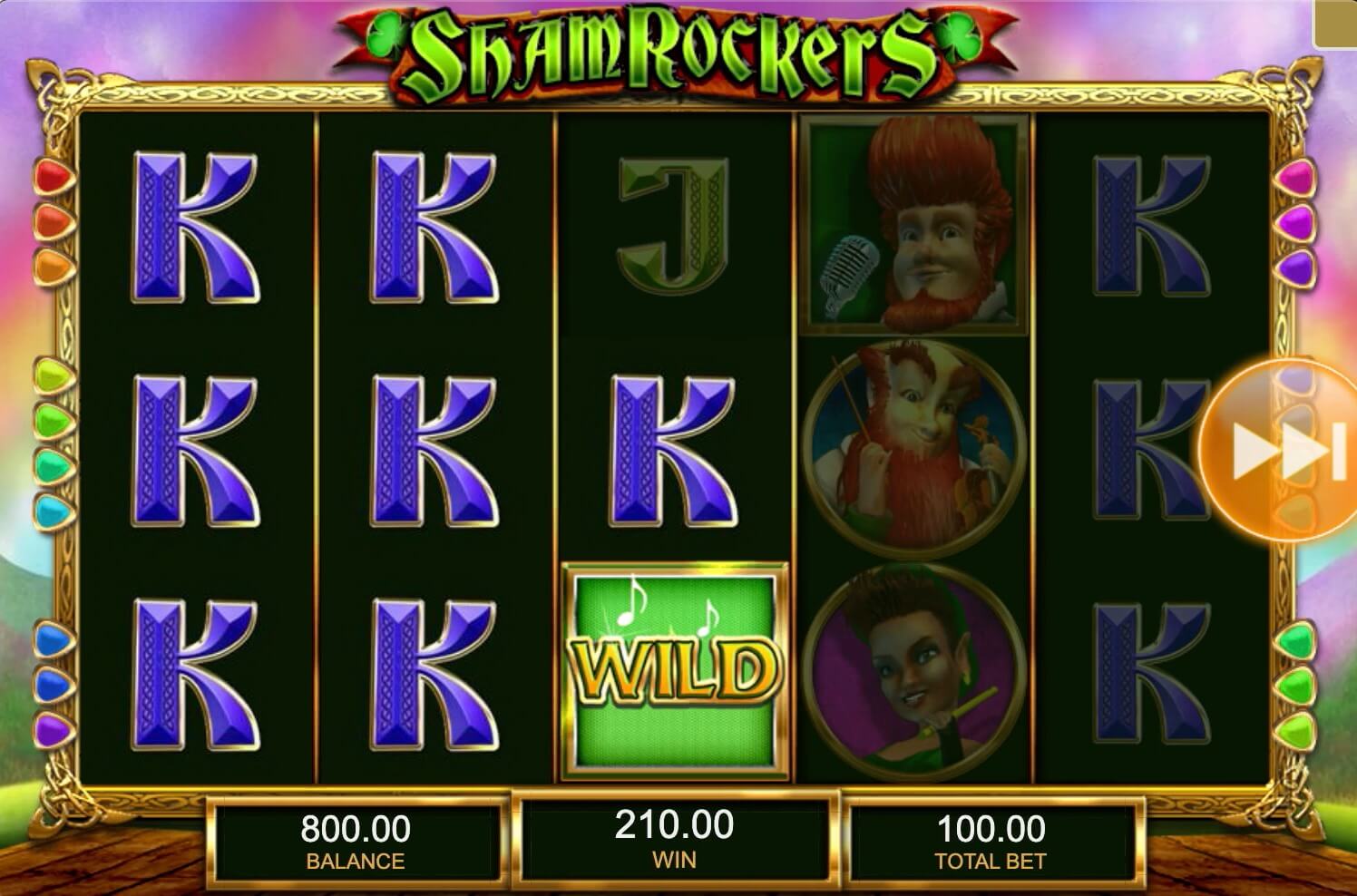 The card-borrowed tiles are as usual paid less. The combination of five 10s or Jacks is paid 20x the line bet. Five Queens or Kings are paid 25x. The max combination of Aces will be paid 30x the line bet. Even though the payouts for the max combos are the same for some tiles, their minimal combinations are not paid the same. Say three 10s are paid 1x the bet, while three Jacks are paid 2x. So check the paytable to have a look at all the payouts, they tend to be tricky sometimes.

The authentic tiles are four icons with rock musicians. The Fiddler is worth 75x the line bet for five. The Drummer Girl is paid 100x. Five Lead Guitarists are worth 250x the line bet. And the last but not the least, five Lead Singers are paid 500x the bet. 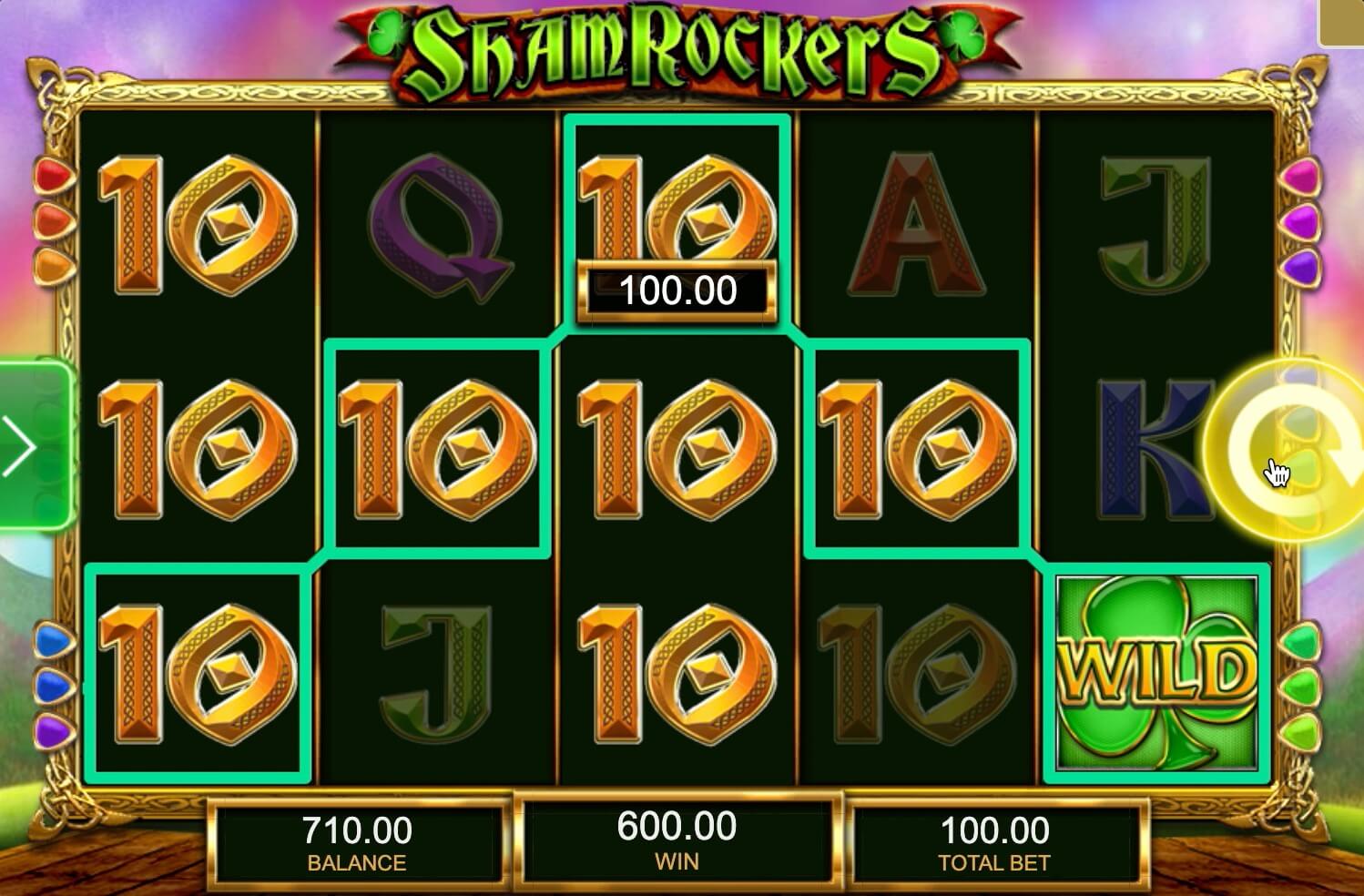 Thus, we have the band ready to perform, and gosh, they are so Eire! The fiddler has a long red beard; the singer is red-haired, and the girl on drums wears a sassy emerald-green hat. So does the guitar player, but what’s more he looks like a leprechaun. Probably it’s all because of the beard! It just sets you in that kind of mood.

Apart from the regular game mode, the slot features plenty of bonus perks. They are standard, but it doesn’t make them less hot. First, the wild. It’s a shamrock leaf tile that substitutes any other tile but the scatter. The wild appears on any reels but the first one. 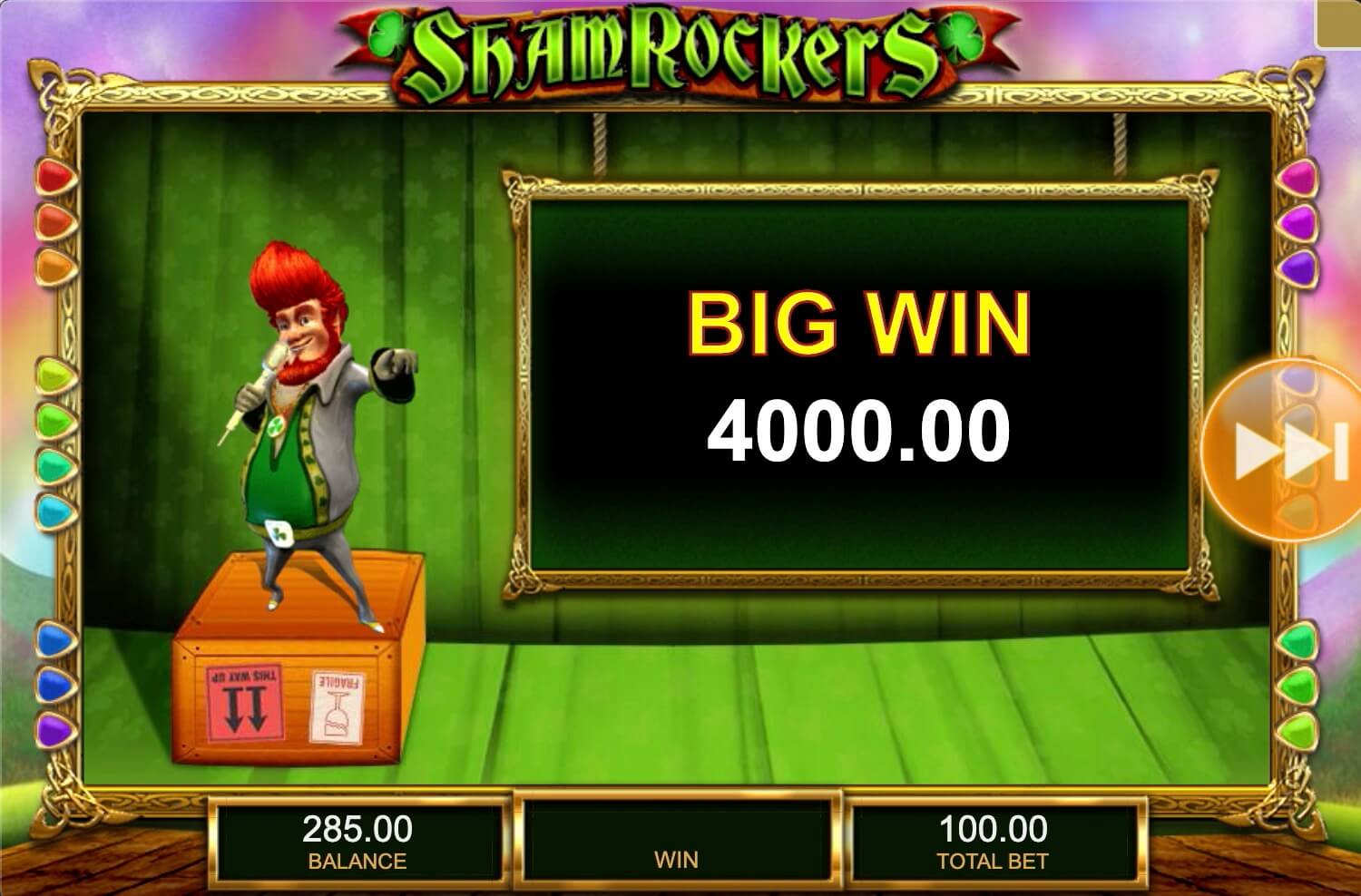 Another bonus tile is the scatter. It is an icon with an entrance ticket to our Shamrockers’ show. Hit three of those and you will be awarded with a free spins’ session. The bonus scatters appear on three central reels only.

The free games' session is rather short, it lasts four spins only. But each spin has an extra perk: an extra stacked wild. The first spin features the stacked Fiddler tile. The stacked tile for the second spin is the Drummer. The third spin’s stacked symbol is the Guitarist. And finally, the last free spin features the stacked Singer. When you trigger the free spin bonus you get 2x the total bet as a cash prize. 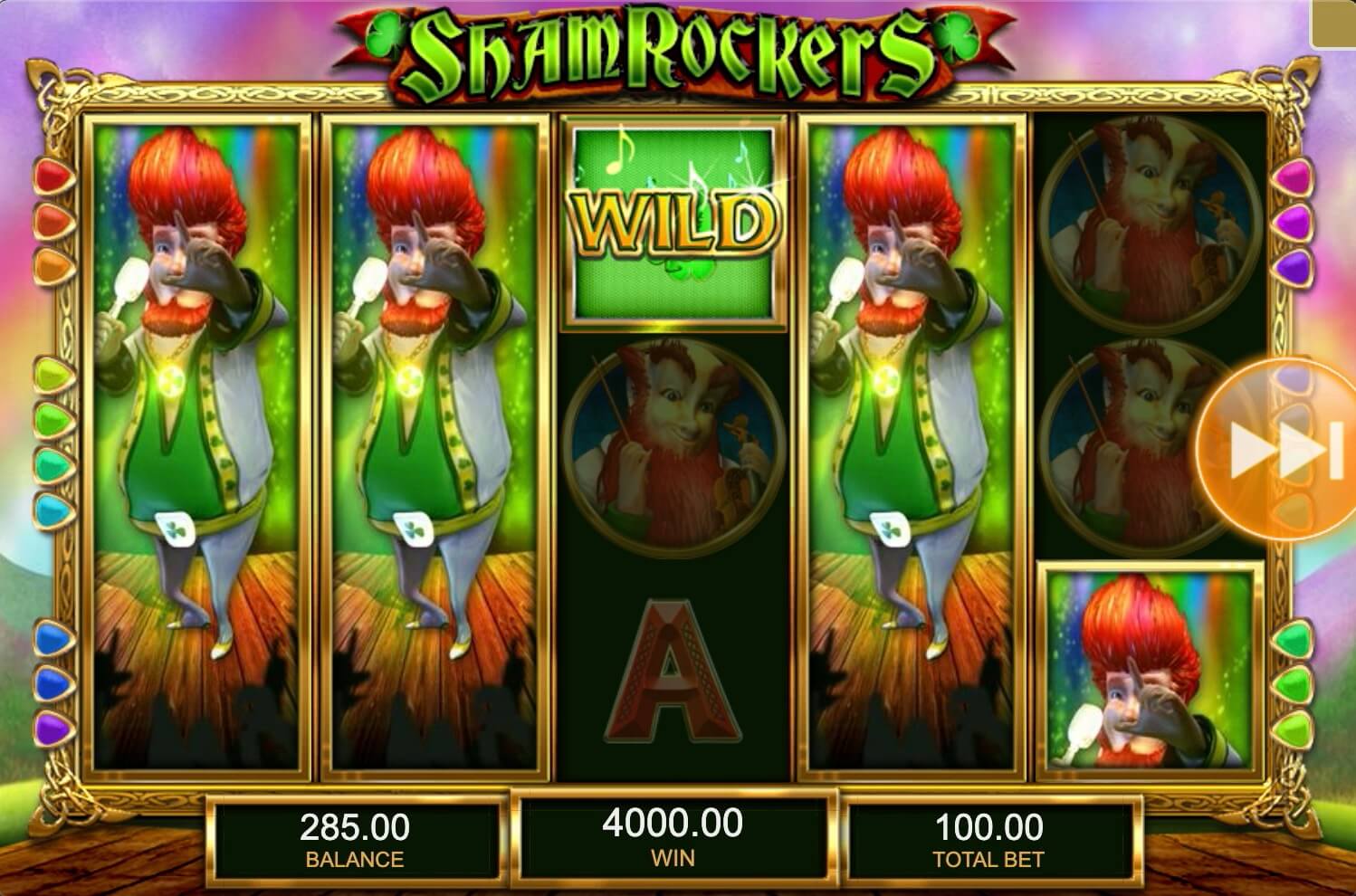 You may re-trigger the free games if you hit a VIP golden ticket at the last spin. This perk is called the Encore feature. The Golden Ticket lands on the last reel of the last spin only. If you are lucky, you may get up to 240 spins on the house.

Are you ready to rock? If not, then your mood we definitely change after a spin or two at Shamrockers. They are a nice company to be around: nice volatility, body-positive and extremely red-haired.

The slot works fantastically smooth; the animation is extremely elaborate and doesn’t really get to you, unlike the background music. But we are more sound-off kinda players. Enjoy your time at Shamrockers: no matter if the sound is on or off, they are hot!