Hot to the Bone!

Imagine a world where everyone is playing by the rules! Sounds pretty boring, right? Sometimes breaking rules is fun, profitable, and sexy. We are speaking for ourselves only, but people we admire are not always knights in shining armours. At times, they behave naughty.

Aren’t we all like that? Don’t we all fall for bad guys or girls? Nextgen understands us perfectly, thus they introduced a new slot. It’s full of badass characters. But those are not guys, those are gals. 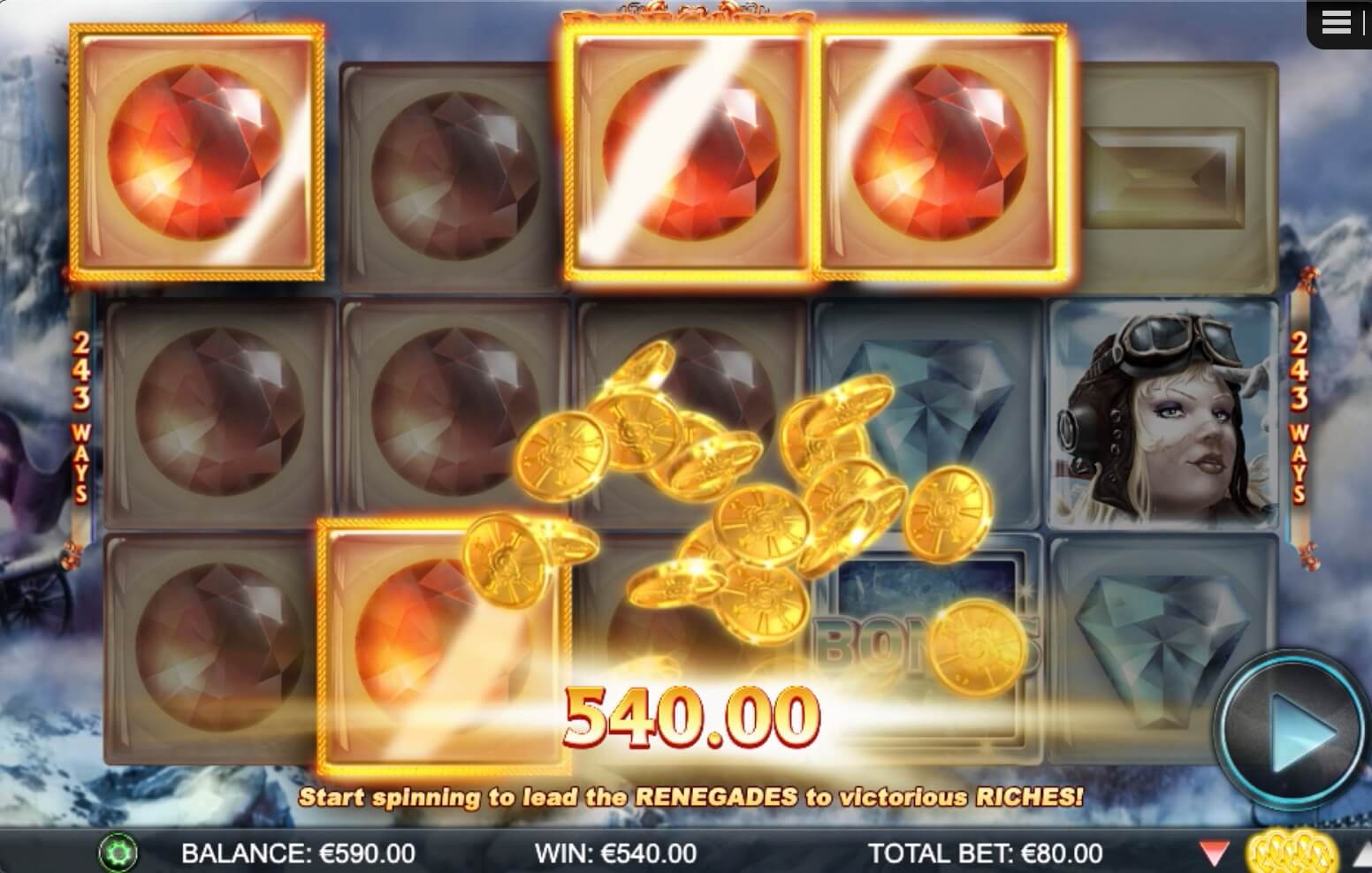 Renegades is full of beautiful women. The fact they are kick ass cool ladies makes it even more entertaining. All the ladies are introduced as the playtiles. First comes Freya. The max combination of Freya tiles is paid 200x, which makes it the most expensive tile of the slot.

The next one is Harriet. Her max combo is worth 150x. Then comes Raffaela. The payout for those five will be 75x. Five Ivy tiles are paid 50x. And finally, there is Valda the Dragonslayer. The combination of five Valda tiles is paid 100x. 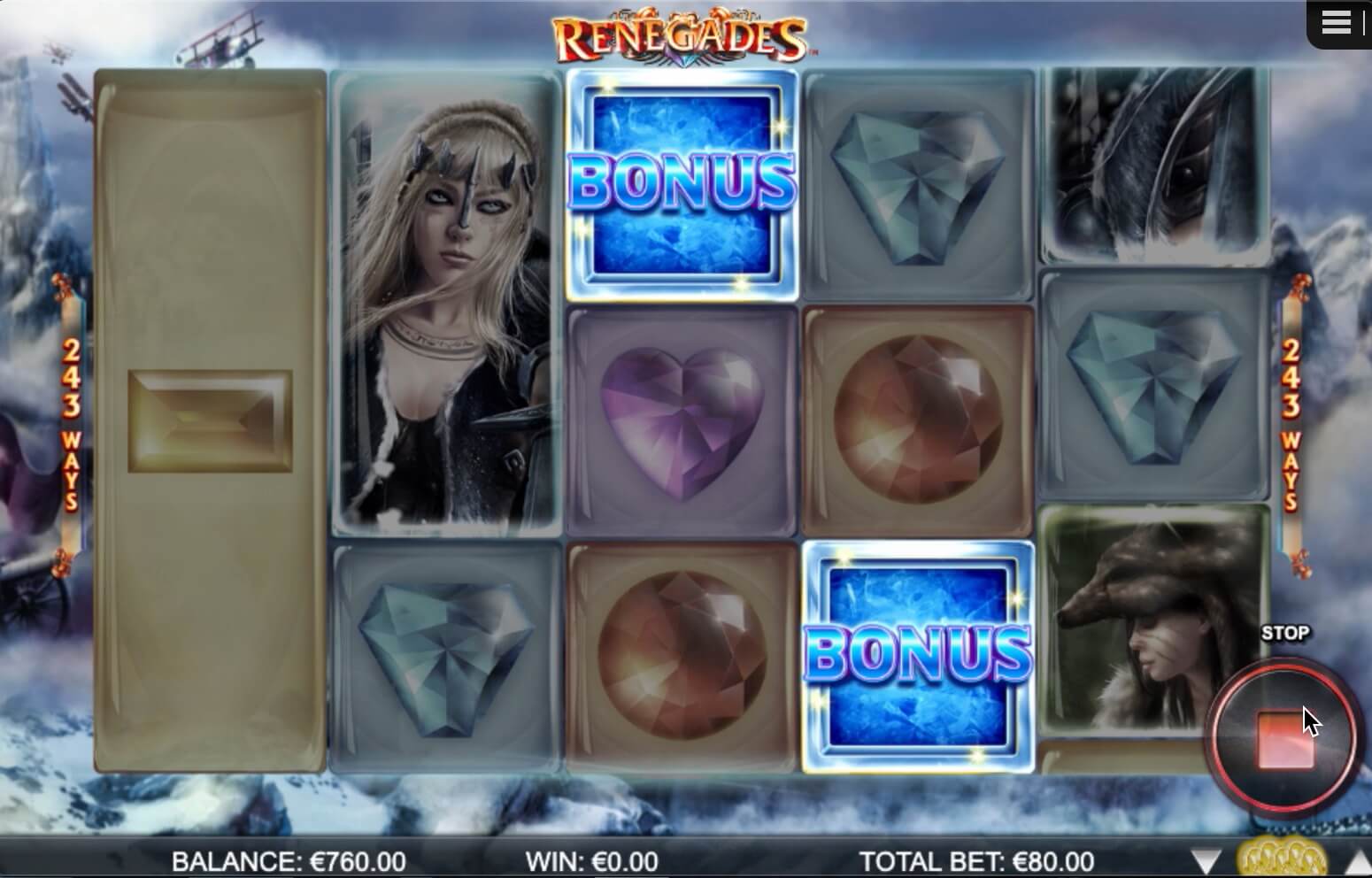 Apart from our charming badass gals, there are five lower-paid tiles. Unlike many slots, Renegades feature not card-borrowed tiles, but the tiles with crystals instead. There are blue, purple, green, red and orange crystals in different shapes. But they are paid the same. The max combo of five is worth 25x. 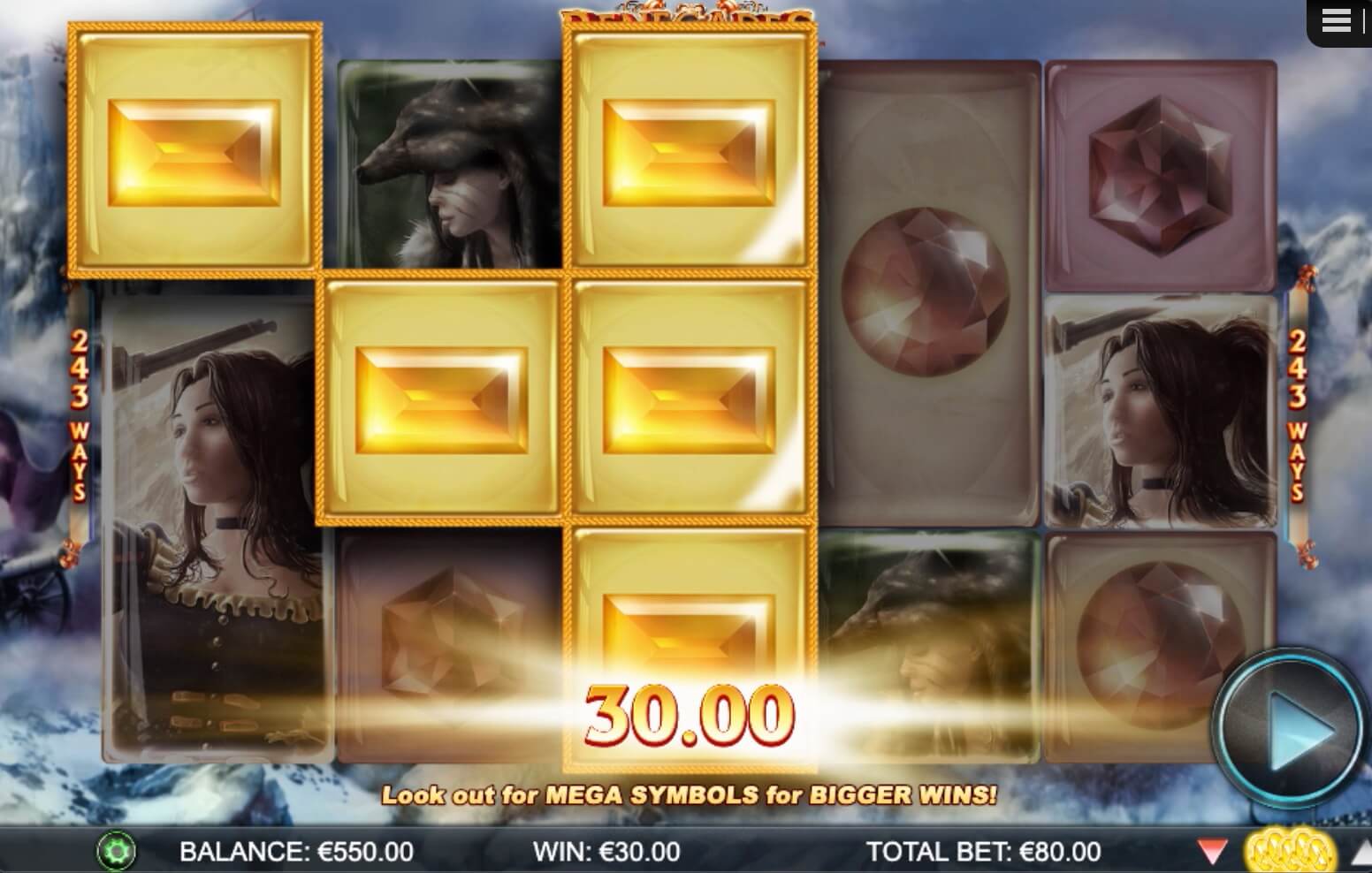 All the combos have to start on the first reel from the left, and there have to be no gaps in a combination. Thus, we get 243 ways to win. All the wins are multiplied by the bet.

So betting at Renegades is rather simple. There are no line bets, obviously, instead each spin you bet 40 coins. Thus, all you can adjust is their value. One coin may be worth from 0.01 to 2.00. The total spin wager thus varies from 0.40 to 80.00. The numbers wouldn’t strike you as fantastically huge, of course. It’s not over a hundred for a spin. But we are not done with the gameplay yet. 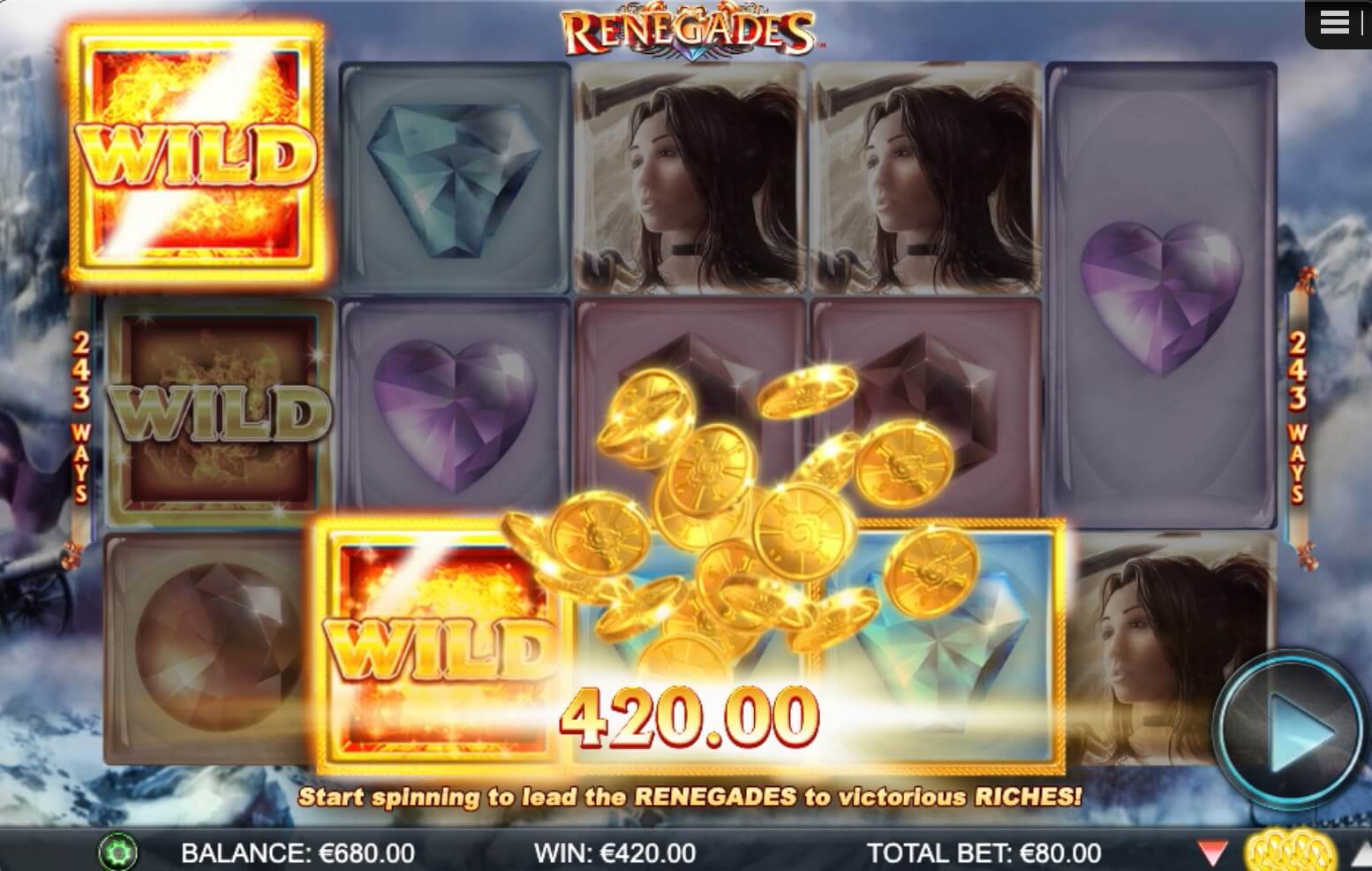 Apart from the regular mode, the slot features plenty of extra features. One of them is the Megasymbol perk. Basically, Megasymbol is a huge tile. Instead of one stop, it takes four or even six. The reels, sort of, lock and spin as one. You may hit a mega symbol during any game.

Another bonus feature is the substitute. At Renegades the Wild is a flaming tile signed ‘Wild’. It may replace a tile missing in a combination. Pretty much any tile, but the Scatter. Also, Wild forms combinations on its own. Five Wilds are worth 250x. The minimal combination of three will be paid 10x the bet. 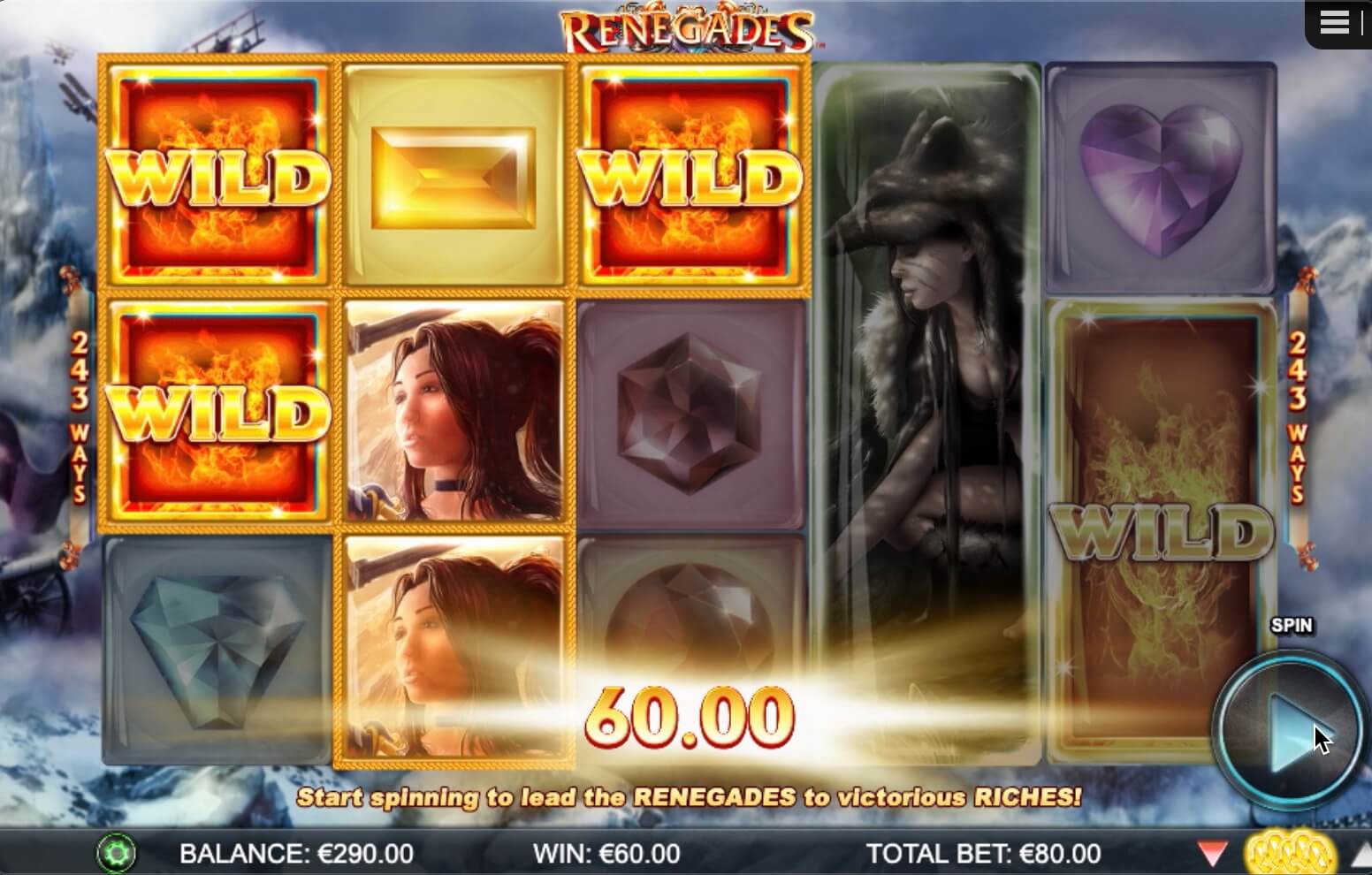 The tile with a ‘Bonus’ sign across it is the Scatter of the slot. It looks like an ice-cube, and it is really flashy. First, it may act as a regular paytile. It will be paid 400x for the five of one kind and 80x the bet for the minimal combination. But the most important thing is that Scatter wins are paid either way. So the combination may start from the leftmost or from the rightmost reels.

What’s more, the Scatter perks are not over yet. Scatters trigger free games. Hit at least three of those and get yourself a session of eight spins on the house. The spins will be played at the bet of the triggering spin. Free games are played on the regular reels, but with one little enhancement. 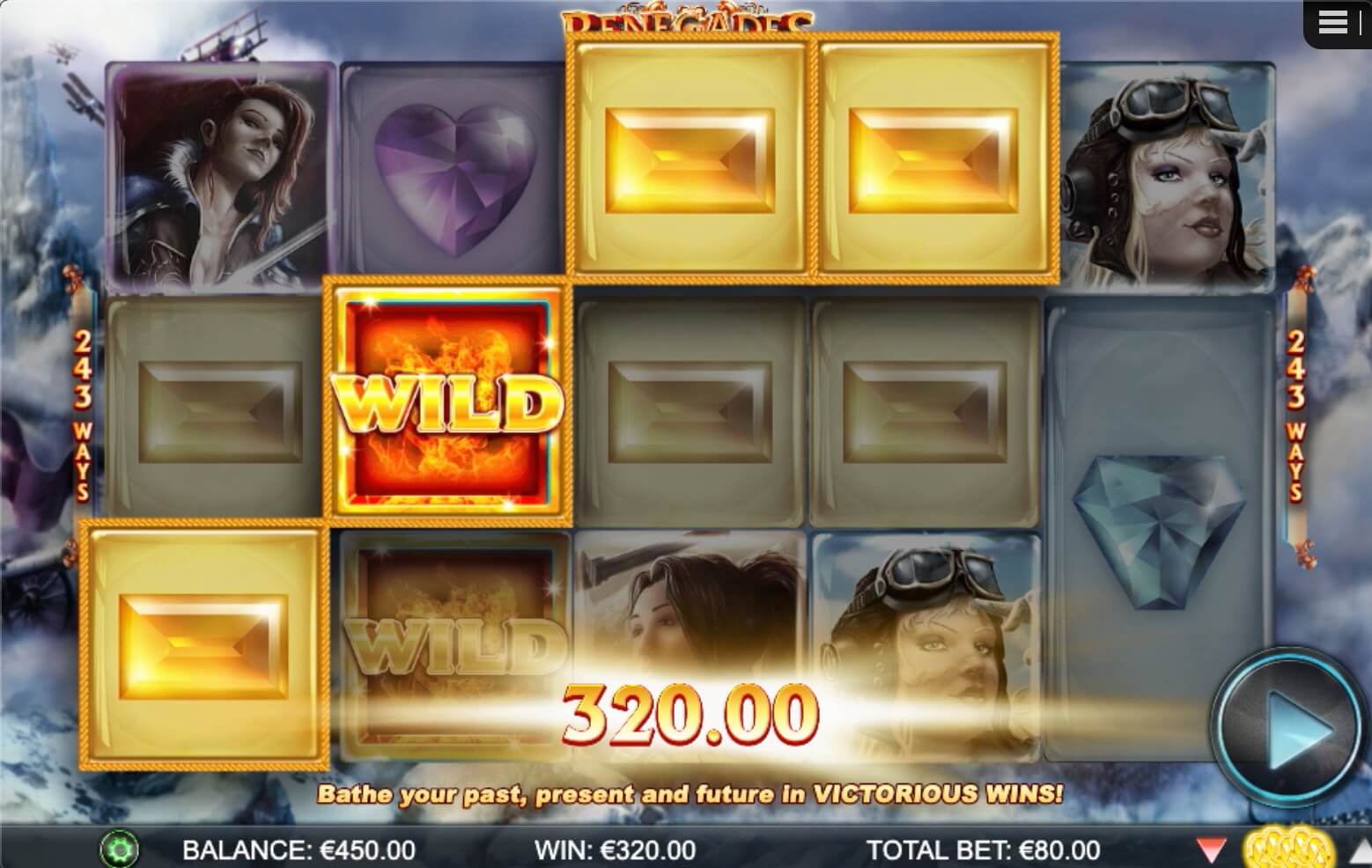 The lower-paid tiles with crystals will stay, so will the scatter and the wild tiles, but instead of all five renegades of the slot, there will be only one. The character is selected randomly and it will be the only high-paid tile in the game for free spins.

There are so many slots around, but Nextgen never ceases to amaze us. They come up with something peculiar, hot and exciting all the time. Now, there is the Renegades machine, which is full of seductive, rebel ladies. They are pleasant to look at and are steaming hot. Can you resist?