Pyramid: The Curse of Endless Wins!

When it comes to Ancient Egypt, what is the first thing that comes to your mind? We always think about the Great Pyramids in Giza. It’s enormously fascinating why those people got into so much trouble with what is basically a bunch of tombstones.

But those are some magnificent tombstones, worthy of kings. A great way to commemorate the great rulers of their land, making them virtually immortal. 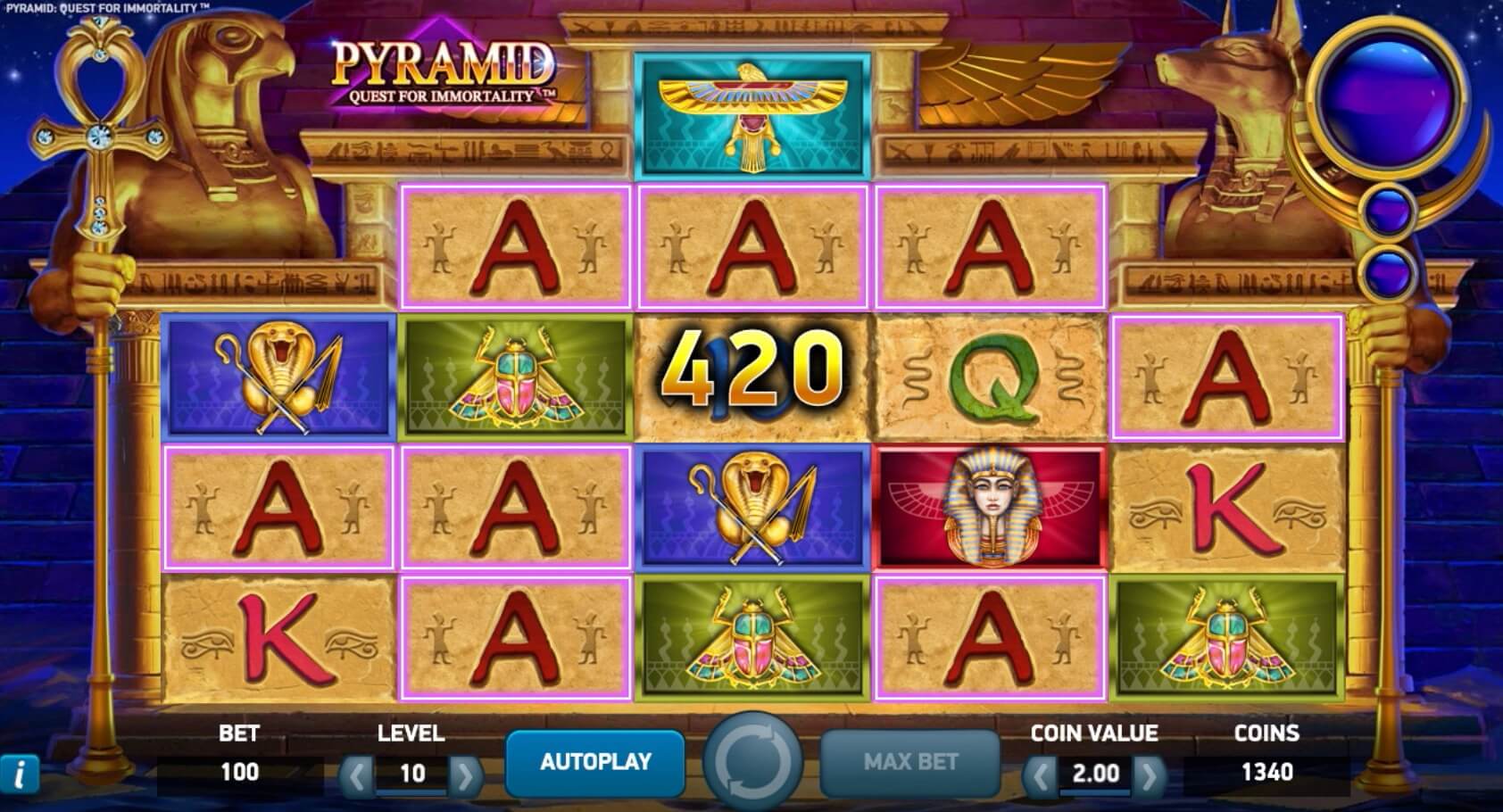 Netent decided to introduce this idea of immortality into a very unusual slot. It is called the Pyramid, and it really looks like a pyramid. The design of the reel-grid is absolutely unique. There are standard five reels, but the number of stops differs depending on the reel. The central reel has got five stops.

The second and the fourth reels have four stops each. And the first and the last reels feature only three stops. And the awesome thing is that the reels are not spinning. We, frankly, enjoyed the animation here a great deal. Each reel is like a pile of stones. When you hit ‘Spin’, new stones fall down, taking the place of the previous bunch. Looks spectacular and really sets the right mood. 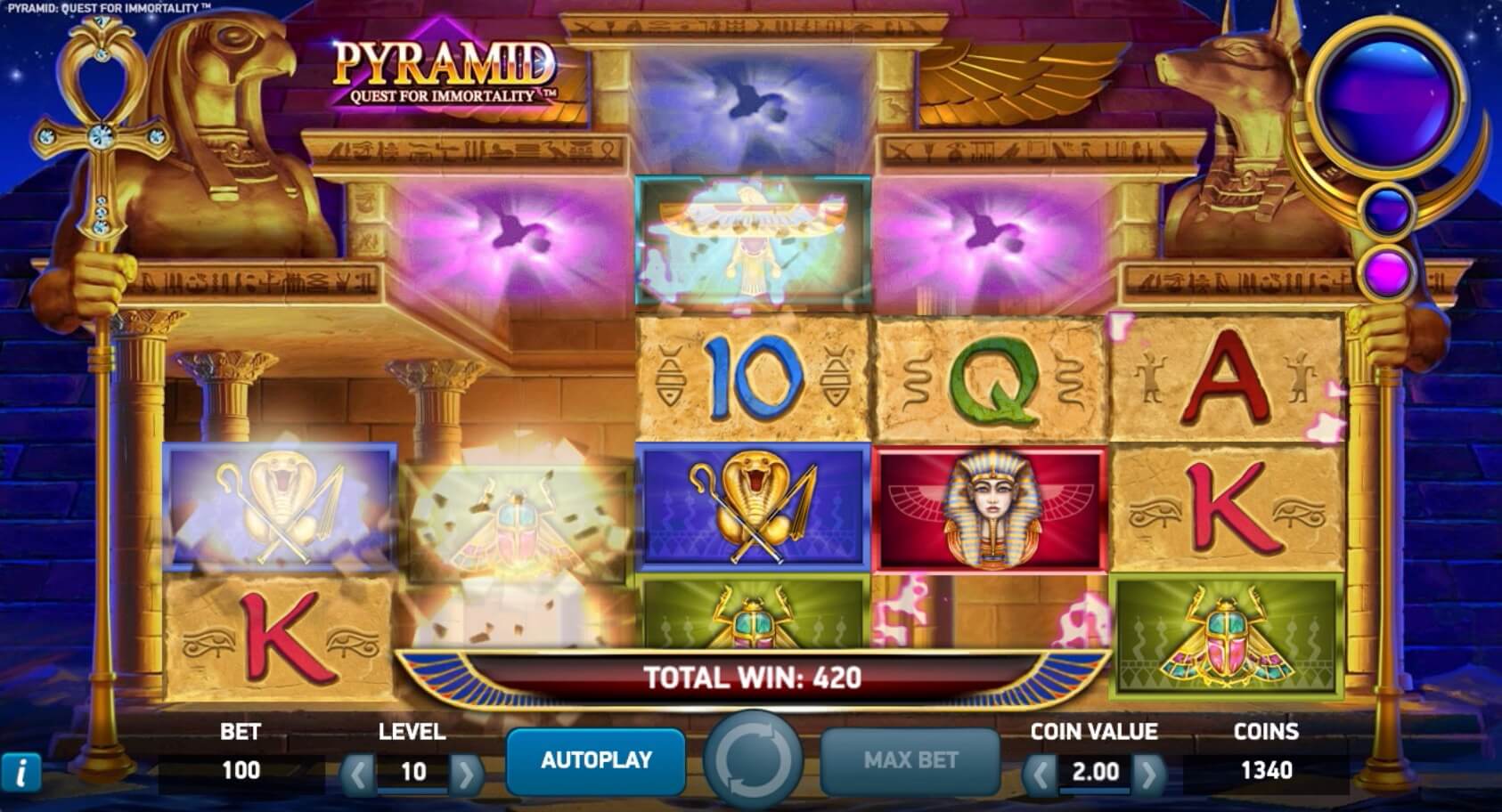 Clearly, the gameplay at the Pyramid can’t be standard. And you are right. There are no lines, instead there are 720 ways to form a winning combo. Yes, you heard us right, not 243, but 720! The idea is basically the same as usual.

Hit several tiles and get paid for them. But instead of hitting them on one line, you hit them on adjacent reels only. Due to the unusual grid shape, there are 720 possible combinations the tiles may arrange into. Each such combo comes with a payout. Just make sure it starts on the leftmost reel. 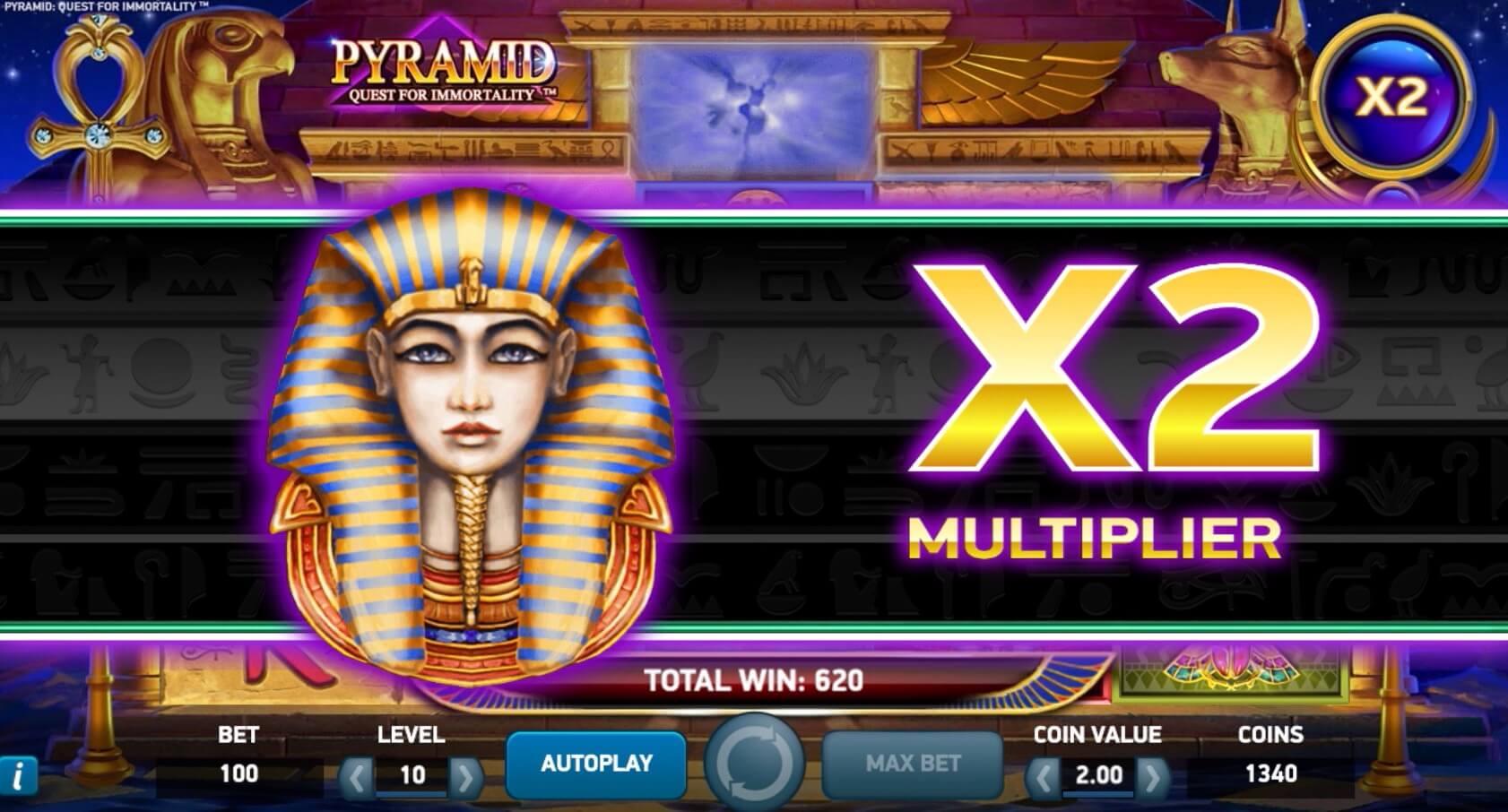 So what are those combinations made of? Slot features two basic types of tiles: the low-hand card-borrowed icons and the themed tiles, that are worth more. The minimal combination of either of those is three of a kind. The max combo is five tiles. The card-tiles are standard. 10s, Jacks and Queens are paid 5x for the set of five. Five Kings are worth 6x. The Ace id paid 7x for five of a kind combo.

The other five tiles are designed to fit the main theme of the game and thus look like all kinds of ancient Egyptian symbols and paraphernalia. The tile with a Cobra is paid 8x for five. Five Horuses or Scarabs will be paid 10x. The Lady Pharaoh is worth 25x for the max combo, and the Guy Pharaoh is worth 50x for the same combo. 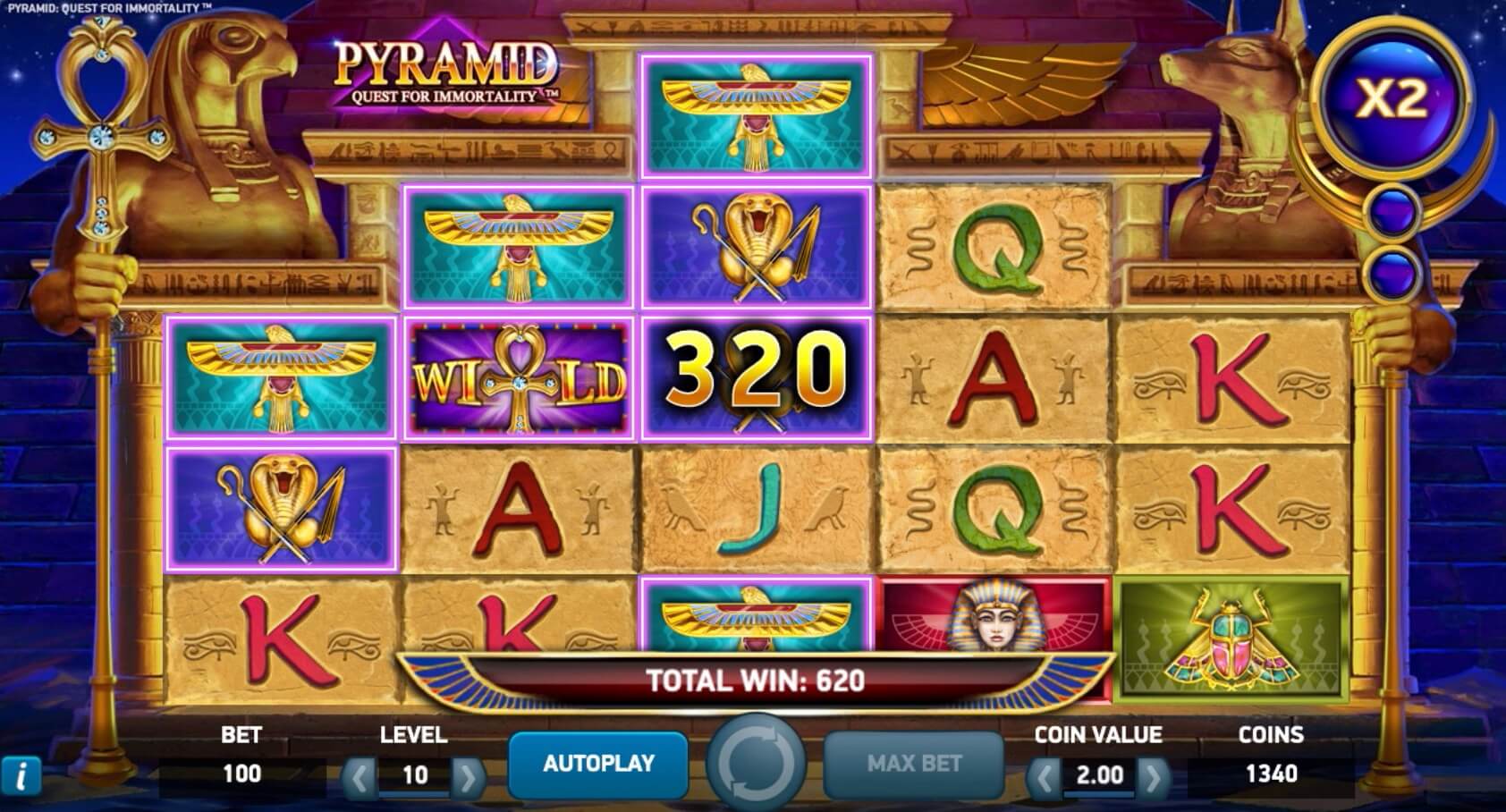 The trickiest thing about betting at a Netent slot is figuring out how the paytable works. First, you choose the value а a coin, which may be from 0.01 to 2.00, and then the betting level. There are ten of those. You bet ten coins per each level.

To figure out how much you win, look up the value of the combo in a paytable and then multiply it by the coin value. It’s a bit complicated, but worth it. 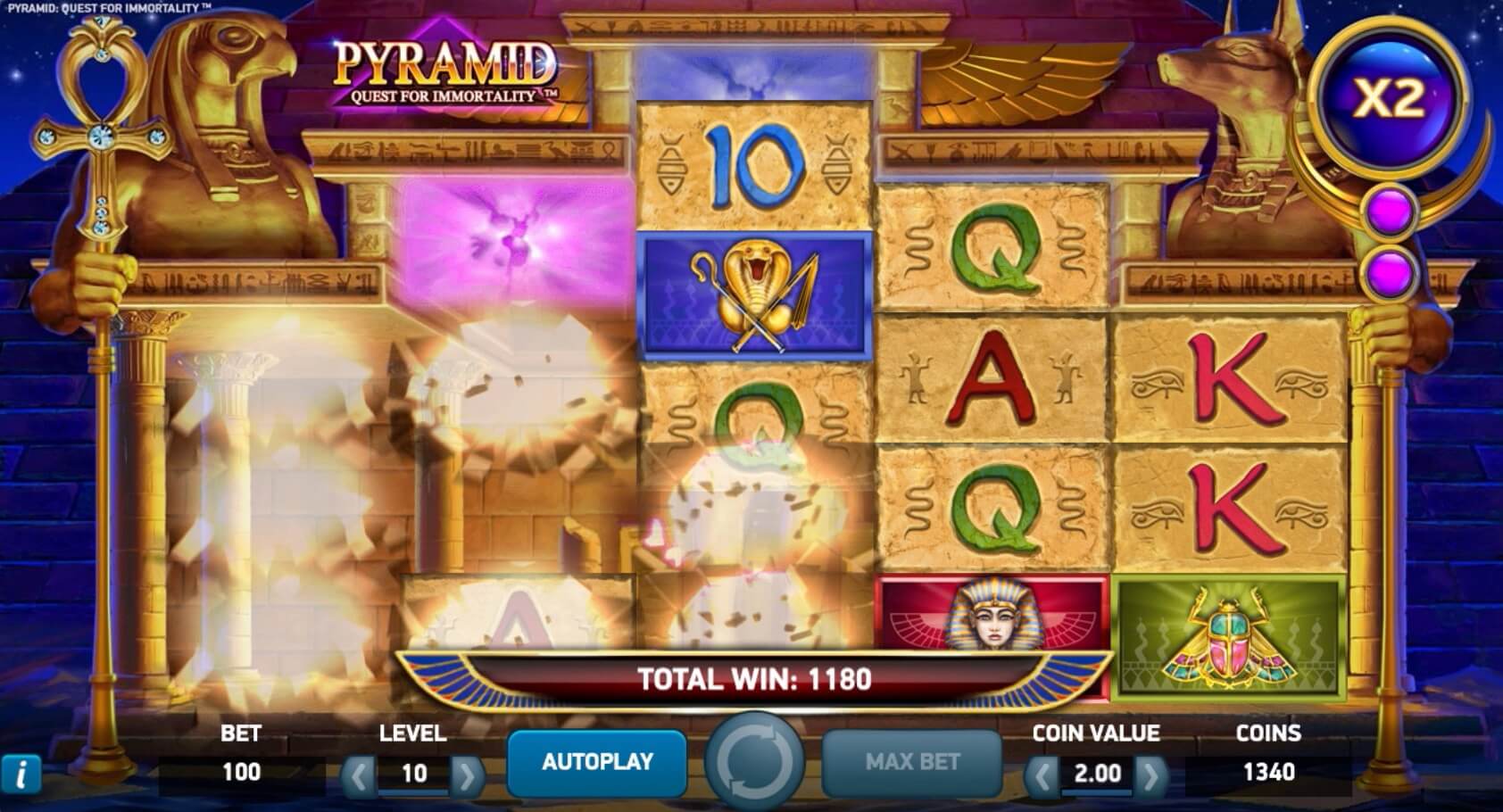 The main game mode is rather simple, as always. But the slot is loaded with bonus features. And we all are mad about them, let’s face it. First, there is the Avalanche feature. Remember, the tiles sort of fall down onto the grid, so the name makes perfect sense.

When you hit a winning combo, it initiates the avalanche. The tiles of the winning combo disappear and the new tiles aka stones fall into their places. Thus, you get one more chance to win, and there is no need to spin again. The avalanche has no limit, and it goes on while you win. After the first loss, you get back into the regular spinning mode. The Avalanche comes with a multiplier. 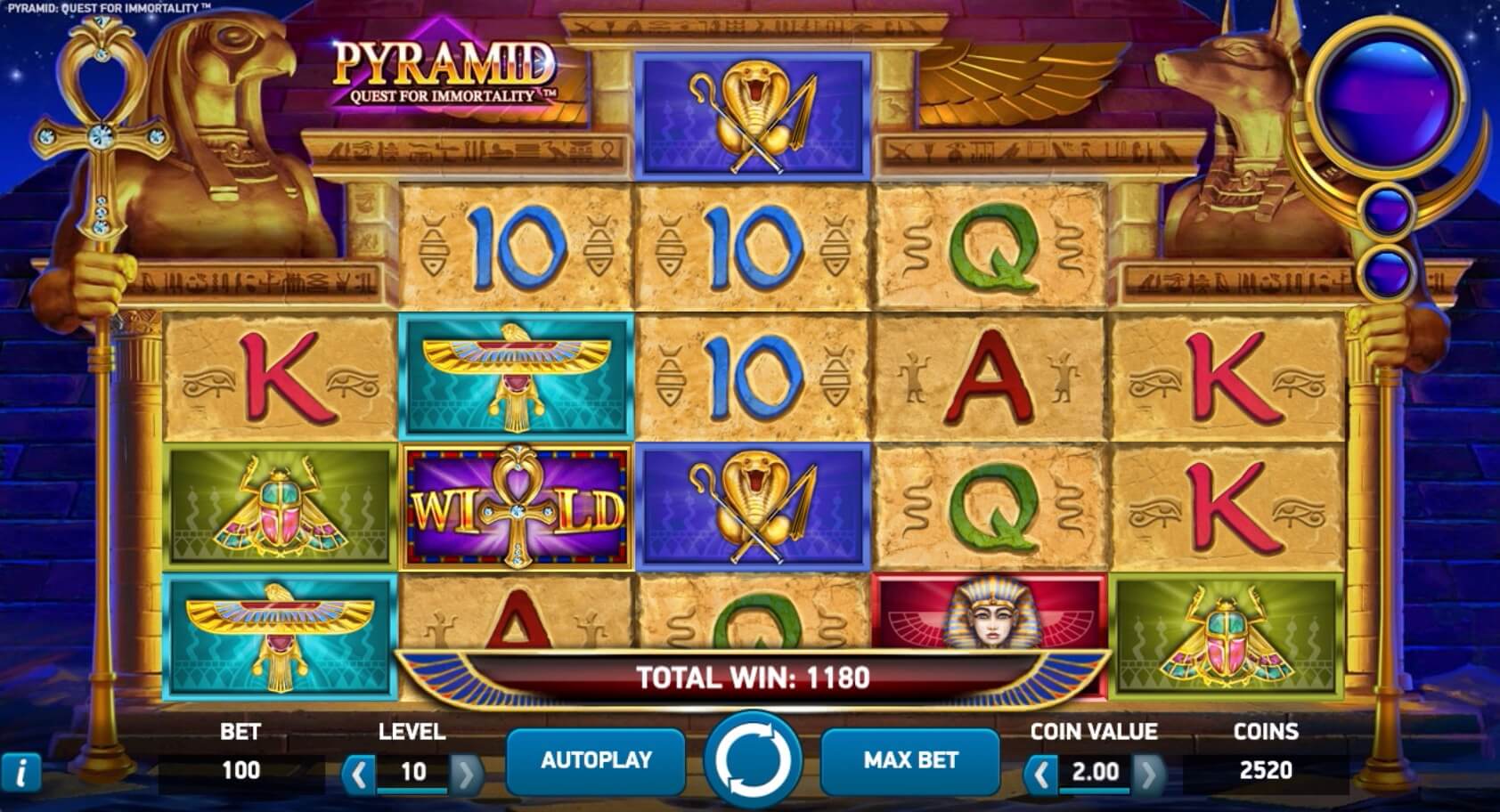 Another bonus perk is connected to the Wild. The Wild at the Pyramid slot is a substitute. It replaces a tile missing in a combo. If it is hit in a combo, this combo will be paid like the highest possible combination for this tile in the paytable. But the Wild perks are not over. 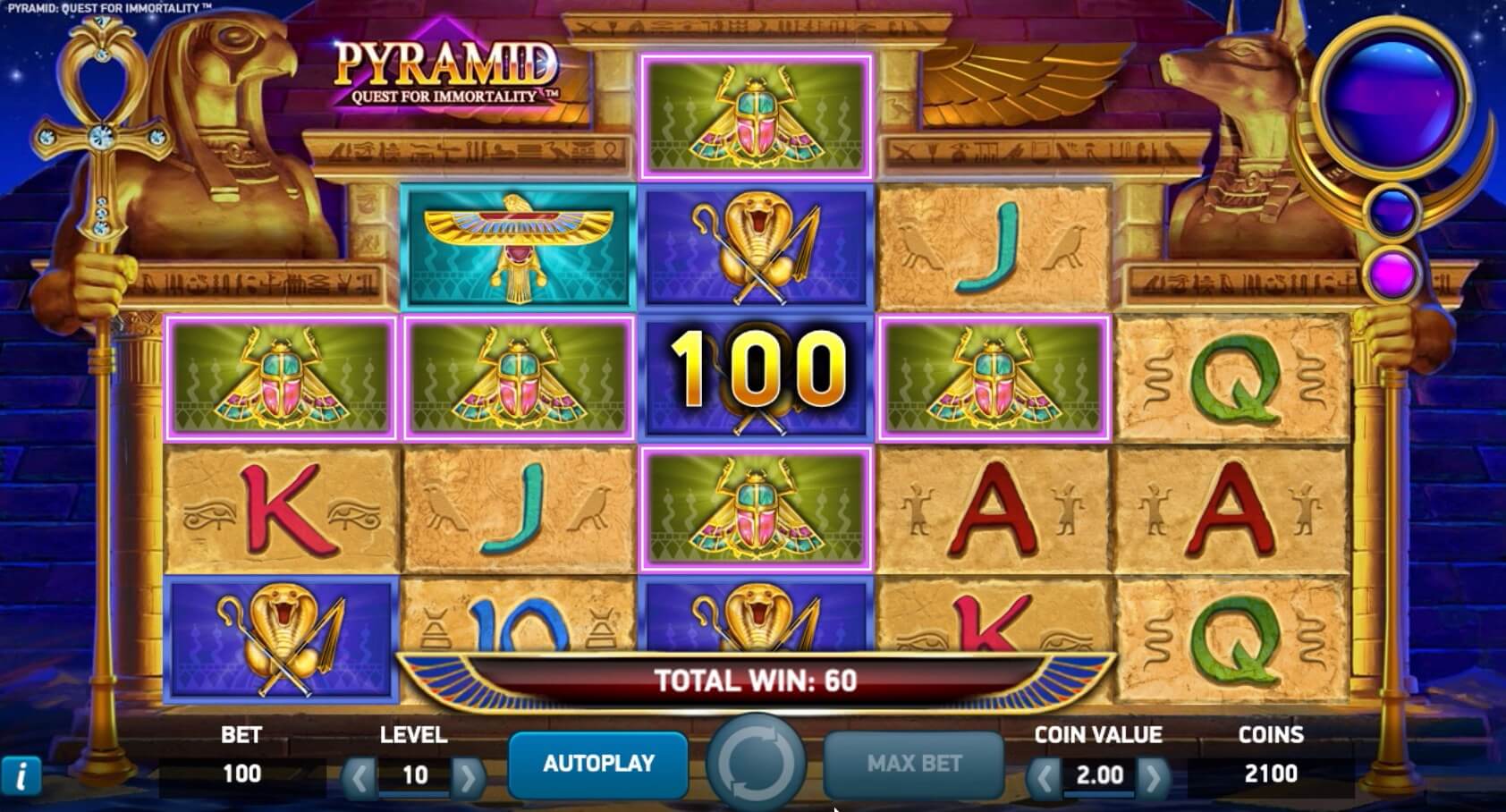 A tile that lands on top of the 2nd, 3rd or 4th reels and it is part of a winning combo, turns into a Wild for the next Avalanche. And if there are Wilds on top of the middle reels, they won’t disappear, but will be Wilds for the following Avalanche.

You may like Ancient Egypt, you may not give a darn about it, but you are going to love the Pyramid slot. 720 bet ways, virtually unstoppable winning avalanches and a multiplier, that just keeps getting bigger. If every Egyptian Pyramid comes with such a curse, then sign us in!