October is still the most anticipated month of the year for all those beer-drinking folks from all over the world. It’s true, this year there is no chance to celebrate it in Bavaria, but that doesn’t mean you can’t do it at home. All you need is some spare time, a pair of leather pants, some sauerkraut and plenty of beer.

Sauerkraut is optional, by the way! Most connoisseurs just stick with plain beer! Studio Eight decided to give their two cents into the October beer-drinking extravaganza. Now, thanks to them, the beer has become optional as well! As the Oktoberfest slot will keep you in the right mood with just mere spinning, no extra substances involved. Intrigued? We bet! 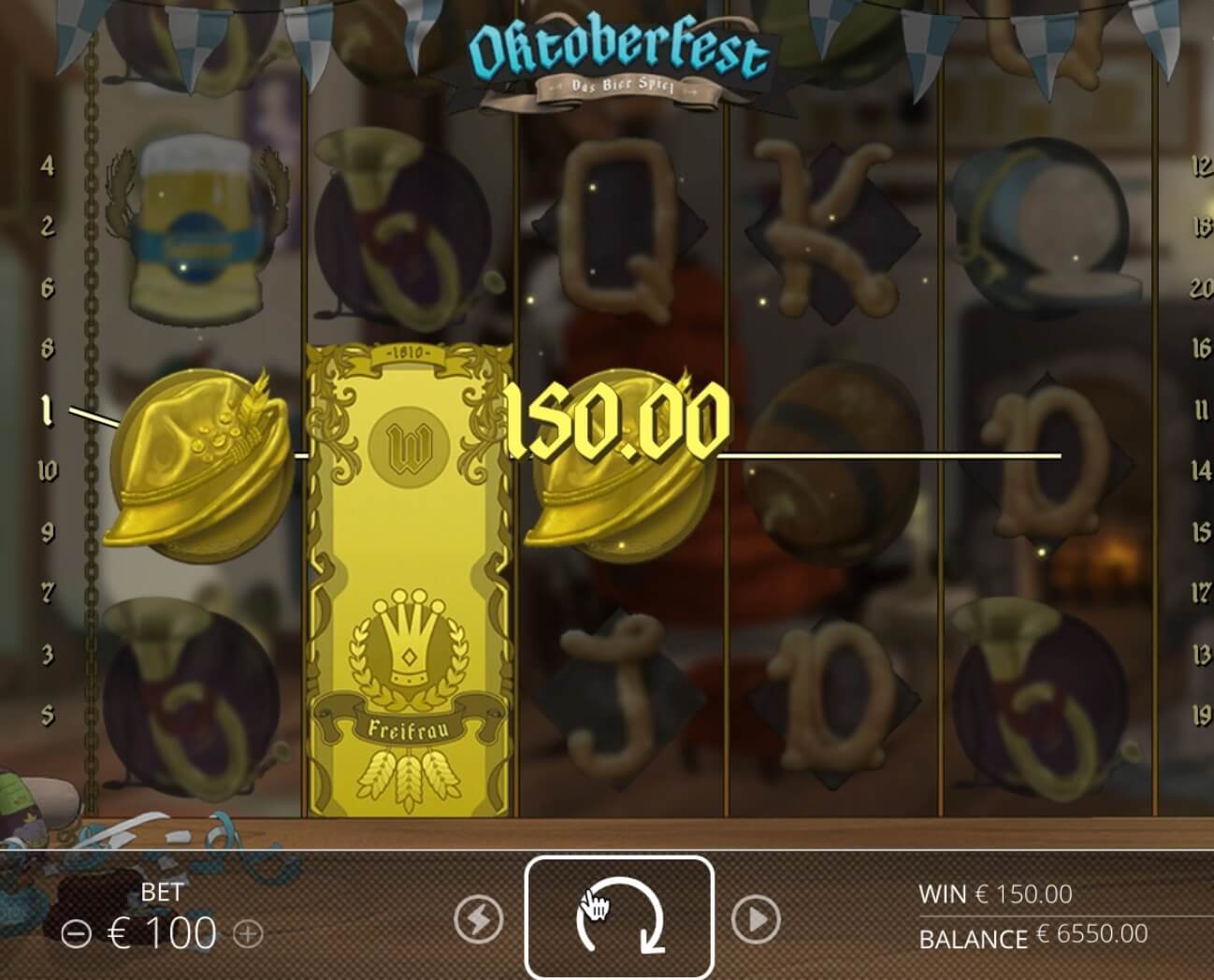 Studio Eight is well-known for their awesome design and gameplay solutions. With Oktoberfest, they decided to stick to the classics and keep it as simple as possible. We can’t but thank them for this, as after a beer or two intricate gameplays fail to work for us at all.

The basics are: 5 reels, 3 rows and 25 fixed lines. Simple and effective! Betting ranges from 0.25 to 250.00 per spin. Some pretty comfortable range, if you ask us: not too low for the highrollers, not overly high for lowrollers. Perfectly balanced. 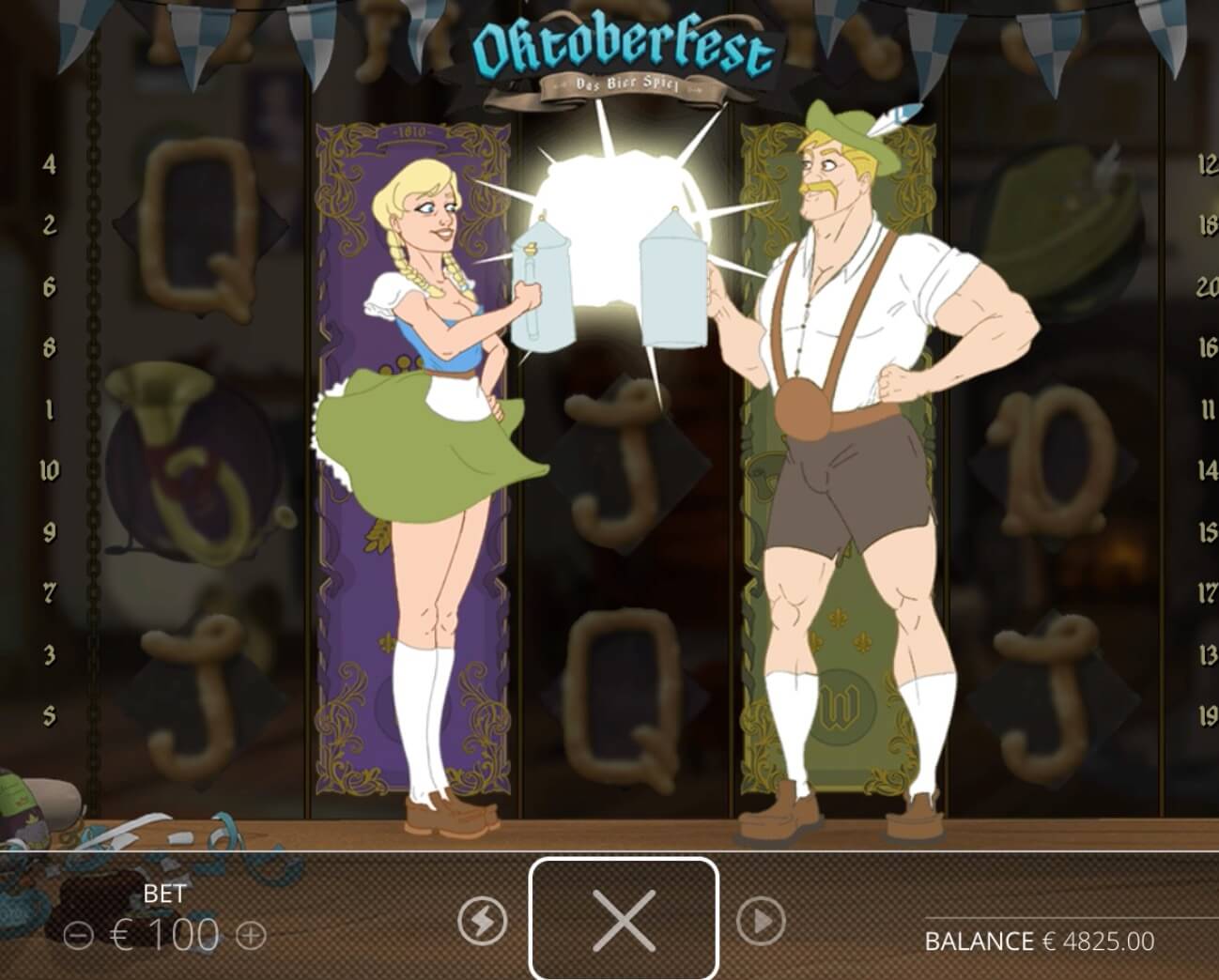 Playing is simple too. Make up your mind on a bet, spin the reels and see how much you have won. All winning combos have to start on the far left reel and have to comprise at least three identical tiles. The maximum combo for any tile will be five of a kind. All the wins are multiplied by the line bet.

The regular mode paysymbols are partially card-borrowed and partially are unique to this game. There are five card-tiles. The 10s are paid 35x for five. Five Jacks are worth 45x. The Queens are paid 55x for the set of five. Five Kings will be paid 65x. And the max combo of Aces is worth 75x. 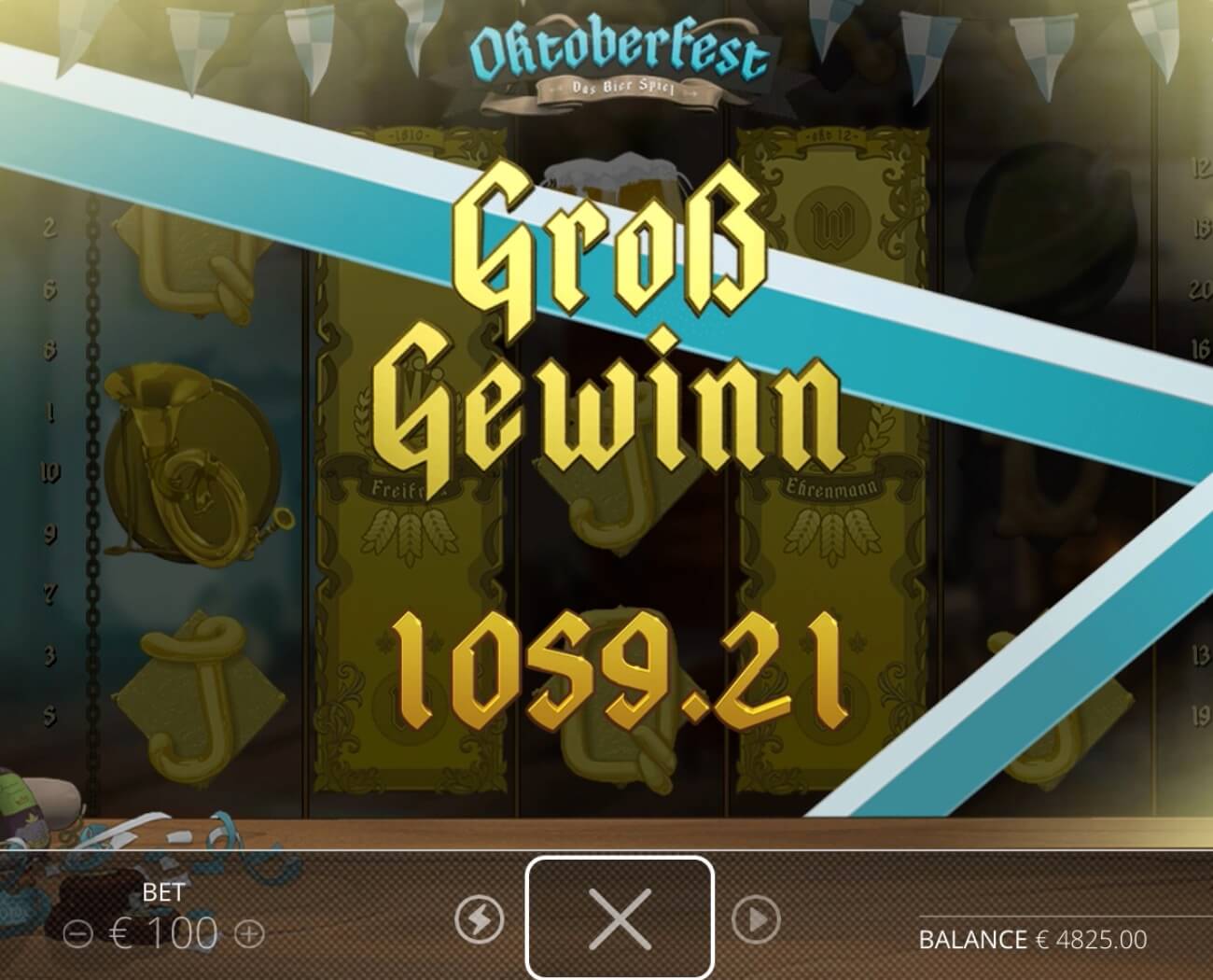 As for the authentic tiles, there are also five of them. Three tiles are quite regular, the min combo is three while the max is five. Those are the Beer Mug, worth 100x for five of a kind. And there is a Sausages tile. Those are paid 125x for the max combo.

Five Pretzels are worth even more, 150x the line bet. But the rest of the tiles, all two of them, definitely stand out. First, their minimal combos start from just two tiles of one kind. Second, their payouts are spectacular. Five Six-packs are paid 250x the line wager. The tile with a Seidel Beer Mug is paid 1,000x the line bet for five. 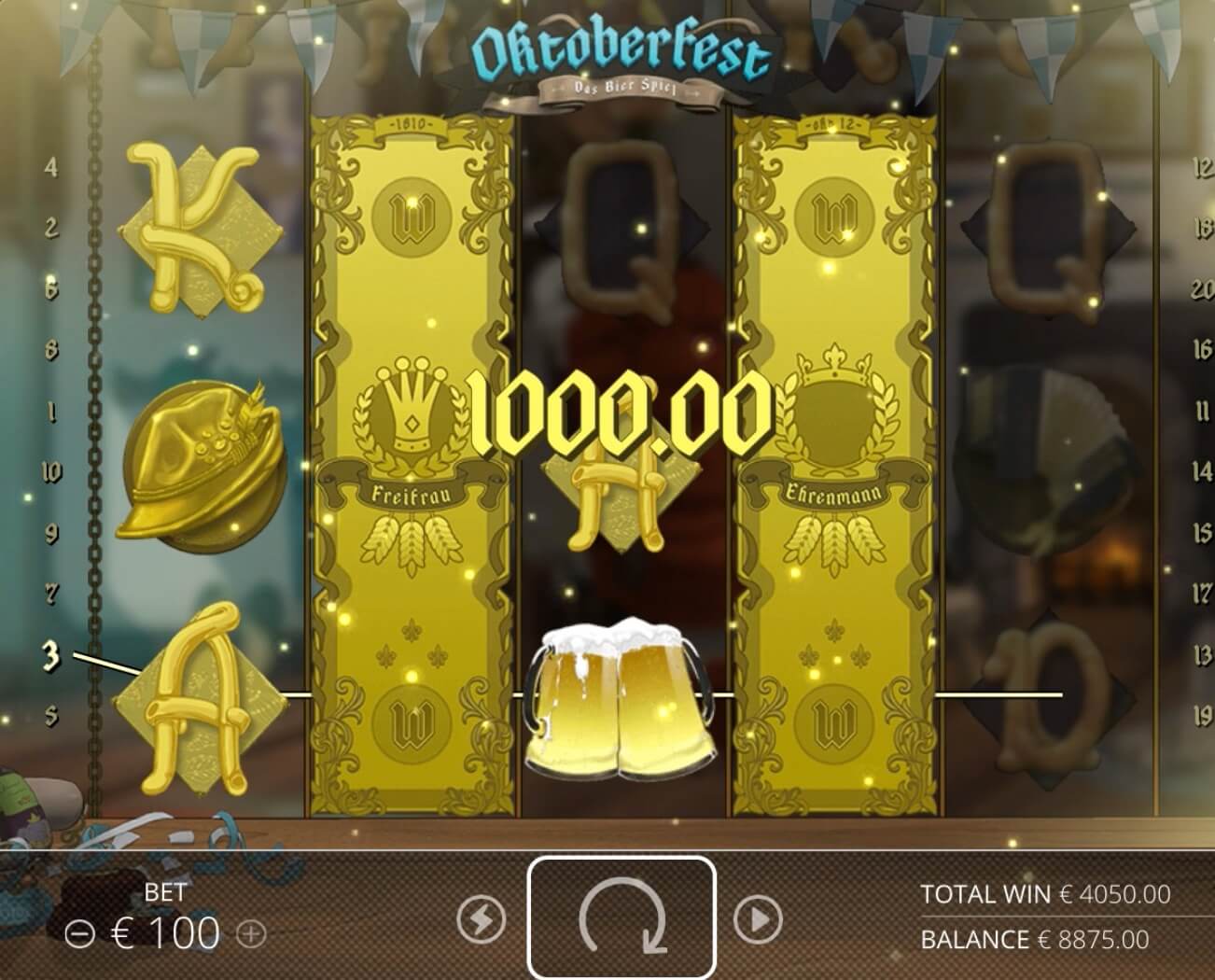 That’s all about the regular gameplay, let’s turn to the bonus perks. And there are plenty of those at Oktoberfest. First, there is the Refill feature. This one is neat. It’s a spin on the house awarded to you when your paid spin didn’t result in a win.

The feature is played at the betting level of the triggering spin, and it can’t be re-triggered. You also can’t win a Jackpot during the Refill spin. There is no special tile to trigger this option, just a beer mug icon that appears over the reels introducing the spin on the house. 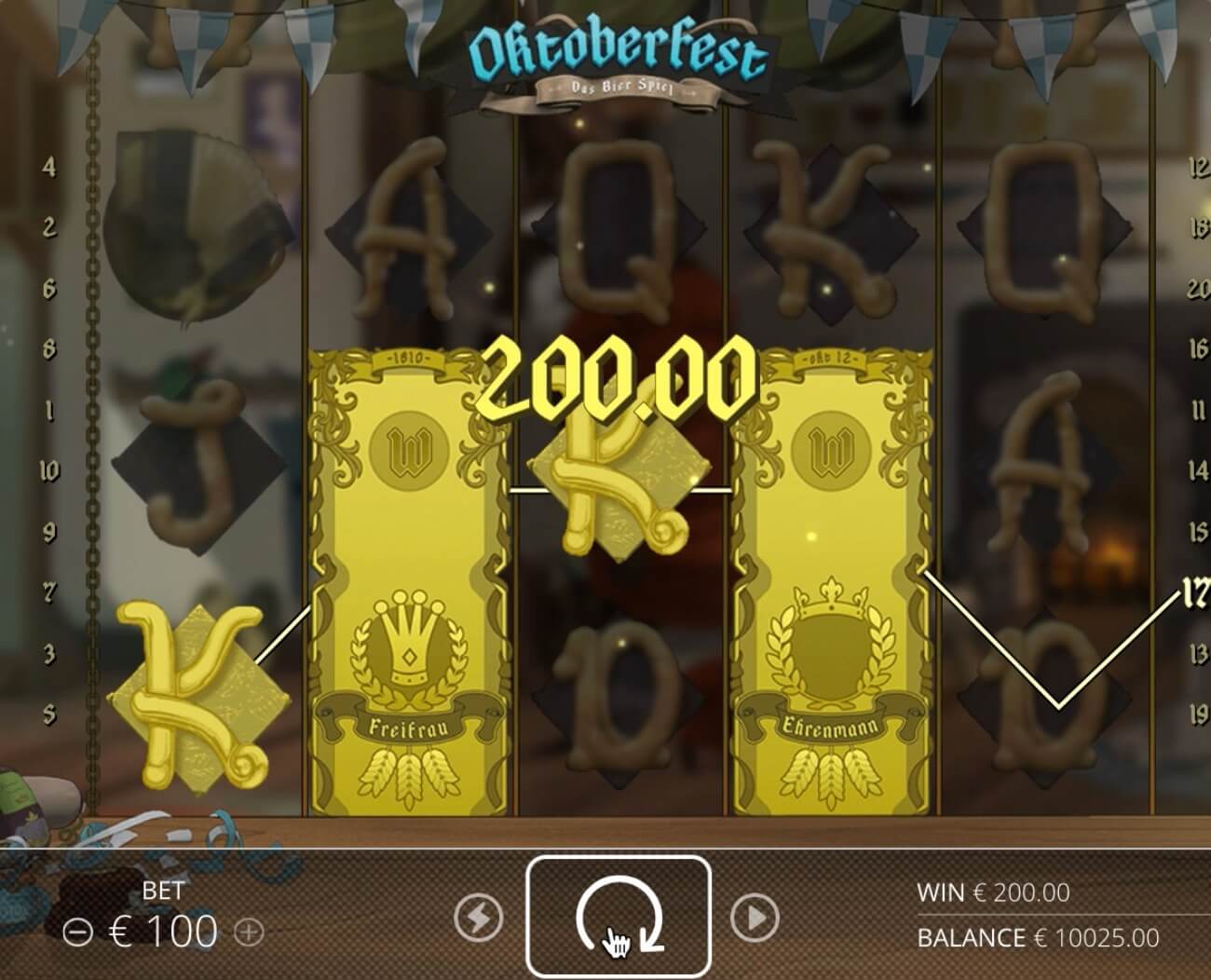 Another perk is the Wild icon. First and foremost, it is a replacement tile. It’s designed to fill in a spot of a tile missing in a combo. Thus, it can replace pretty much any tile in the slot but other bonus icons. What’s more, the Wild may become expandable if it is hit on the middle reel during the refill spin. If there are no winning combos, the wild won’t expand, though.

The next bonus perk is the Bonus pick-me game. It is triggered by a tile with a Dog signed ‘Bonus’. To activate the feature, the tile has to appear on the first and the last reels, on the middle stops in one spin. As in any other pick-me game, you will get three chances to pick. 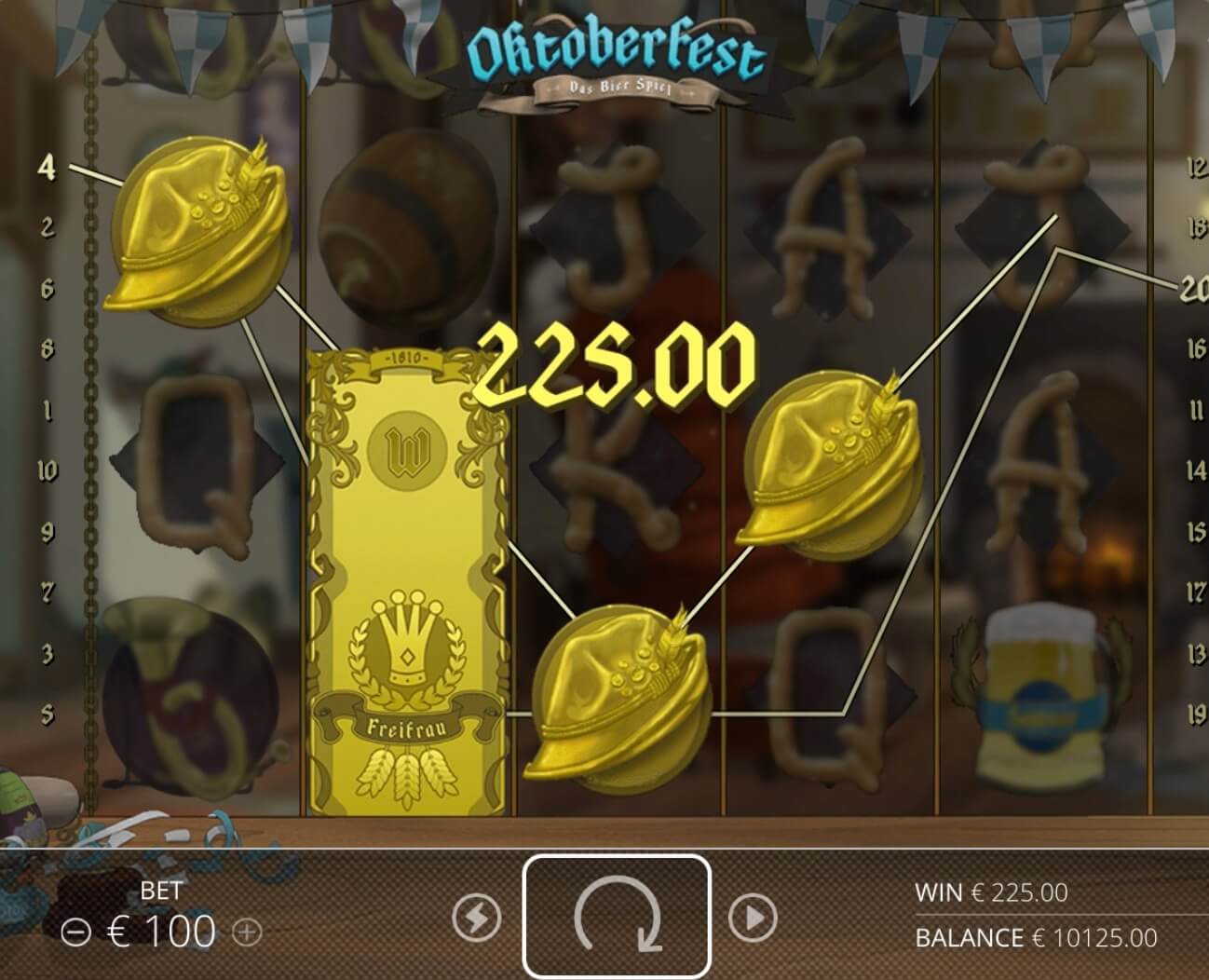 But the best perk we were saving for last. Oktoberfest is a progressive jackpot slot. To hit it, all you need is to play. The feature is awarded randomly and you don’t have to wait for some mysterious combination. Though you might consider adjusting the bet, as the size of the spin wager does influence your chances to get the pot.

Celebrating October with beer-drinking is a good old tradition. But why not make it even better? This October, consider spicing the beer routine up with some progressive wins. Let’s give rise to a new tradition to celebrate Octobers with wins. The bigger they will be, the better.