Nordic Heroes was designed by IGT. By the look of it, you can’t say this slot is something unusual. It features standard 5 reels, three rows, and 30 paylines. The basic gameplay is as basic as it may possibly be: spin, land combos and win. But there are some extra features that make your experience at Nordic Heroes absolutely unforgettable. But first things first, let’s deal with the regular mode first.

As we have said, the basic mode is plain. There is a set of paytiles. All you need to do is to land a combination of identical paysymblos on any of the 30 available lines. All combos have to start from the leftmost reel. The cheapest tiles in the game are two tiles with something that looks like coins. Both are paid 100x the line bet for the set of five. Five Sails are worth 120x, and so are the five Red Berries’ icons. 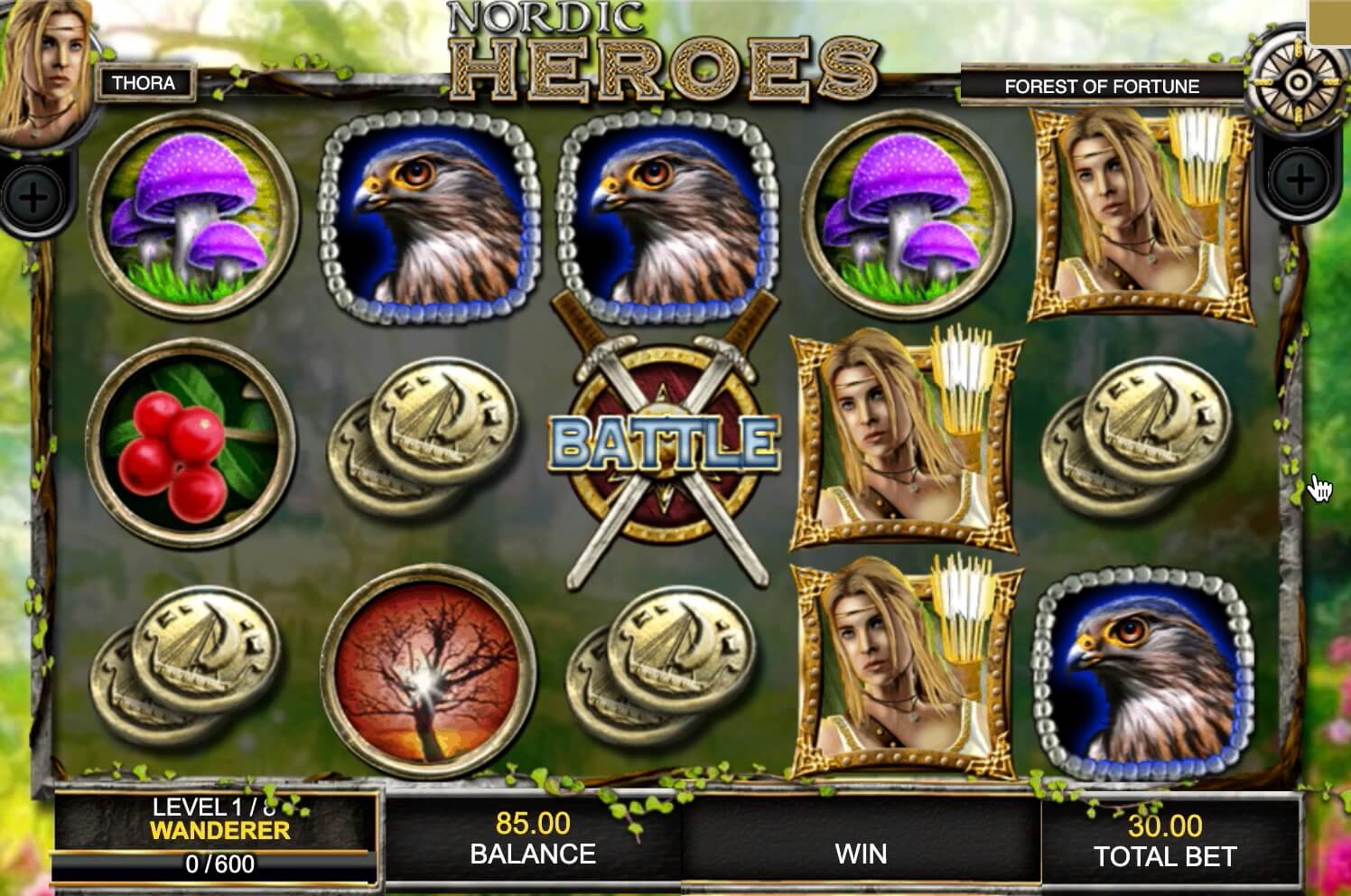 The most expensive tile of the slot is the Wild. Five of those will be worth 1,500x the line wager. All the tiles are designed to match the main theme of the slot, so all of them are authentic and rather intimidating. As always, Wild is a substitute. It replaces any tile, but the scatters. And at Nordic Heroes there are plenty of those.

First, there is a fantastic Battle Bonus feature. It is initiated by the scatter with two crossed swords signed ‘Battle.’ This tile appears in the main game mode on the first, third and fifth reels only. Here the fun really begins, as the Battle Bonus is basically a free-spin session. And it is potentially infinite. How does that work, you wonder? Well, it’s a bit tricky, but we’ll try to give you the basic idea. 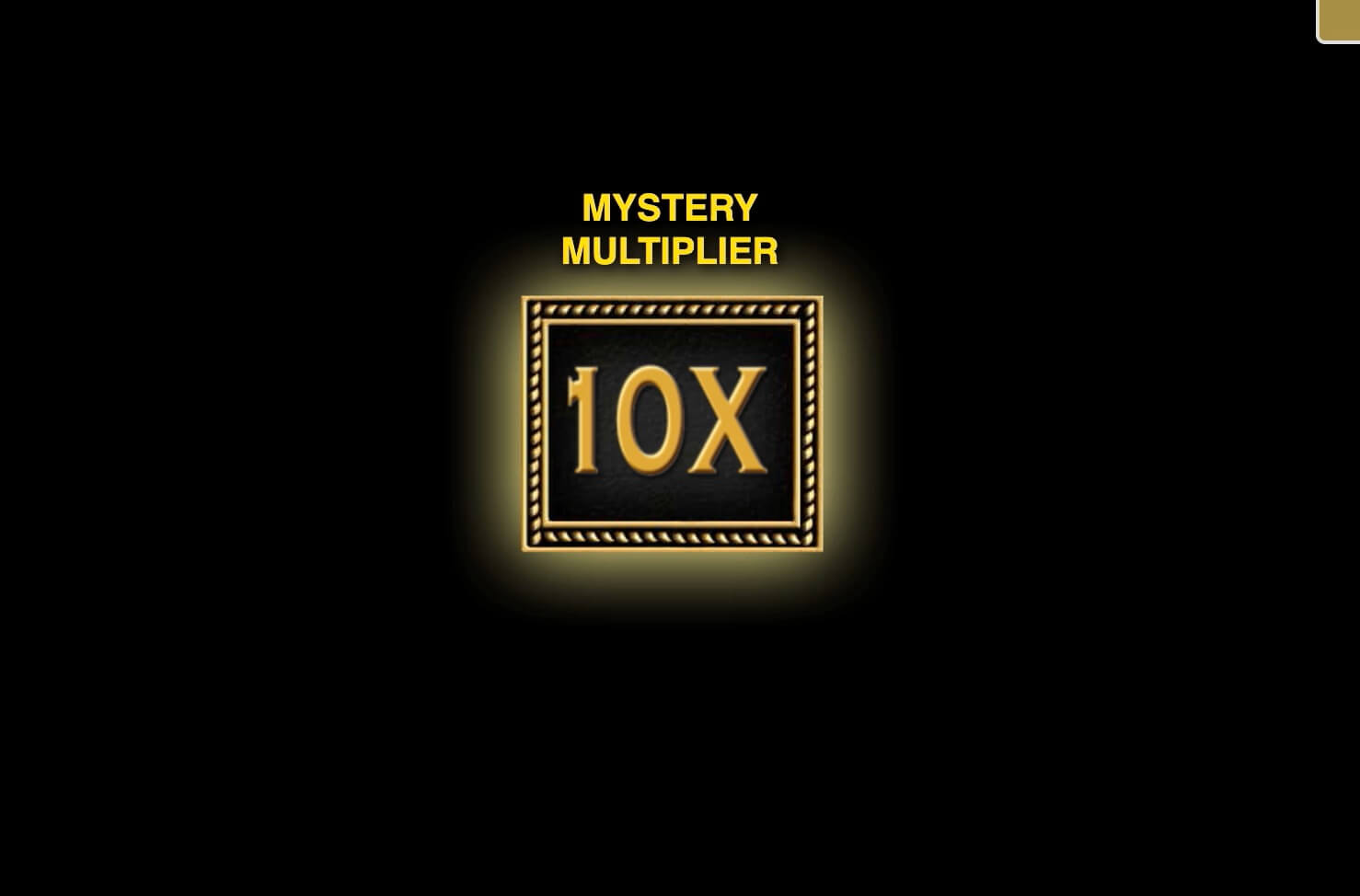 At Nordic Heroes you yourself become a hero, or rather a character. You start off as Thora, and after the level up a new avatar of Ragnar will unlock. Each character has its merits, its strong suits and its weapons. So in a Battle Bonus your avatar has to confront a Beast. After every free spin a pair of Battle reels spin, this is how your character makes a move against a monster. 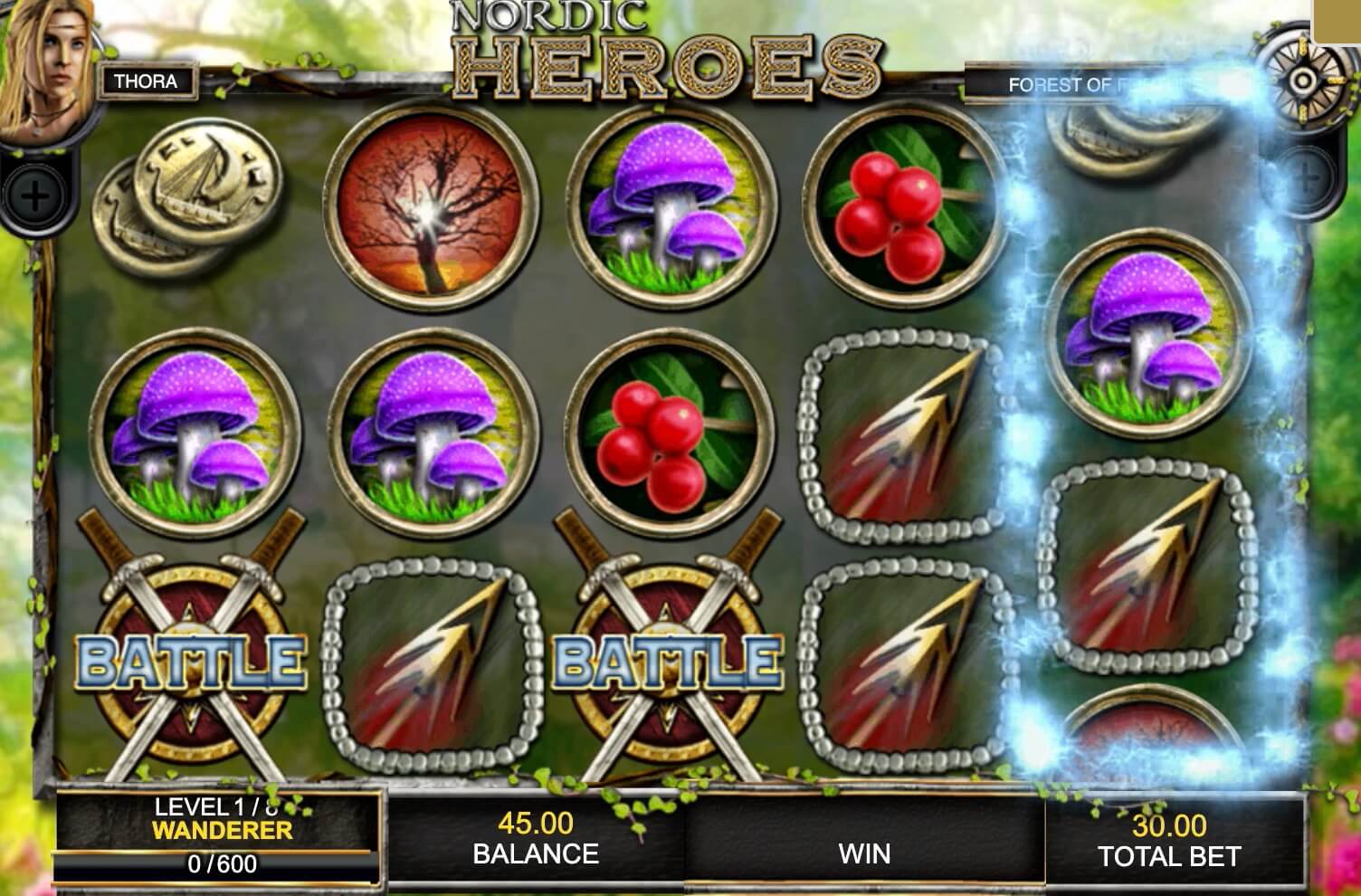 They are Giant Crab, Squid and Sea Serpent. The monsters appear one after another and attack your character with their weapons. Wolf hits you with Jaws, Boar attacks with Tusks and Charge; and Dark Elf has five tiles that may hurt you: Evil Arrow, Boots, Raven, Spiked Boots, and finally Flaming Boots. Giant Grab attacks with Claws, Squid attacks with Ink and Sea Serpent hurts you with Tail and Jaws.

How can your character defend herself or himself from these monstrous attacks? Well, that depends on your level. We all start off at Wanderers. At this first level, our character Thora is equipped with Arrow and Falcon. As you reach the second level, you get one more feature to defend yourself with: Thora’s Boots, that come in three variants: regular pair, Spiked Boots and Flaming Boots. 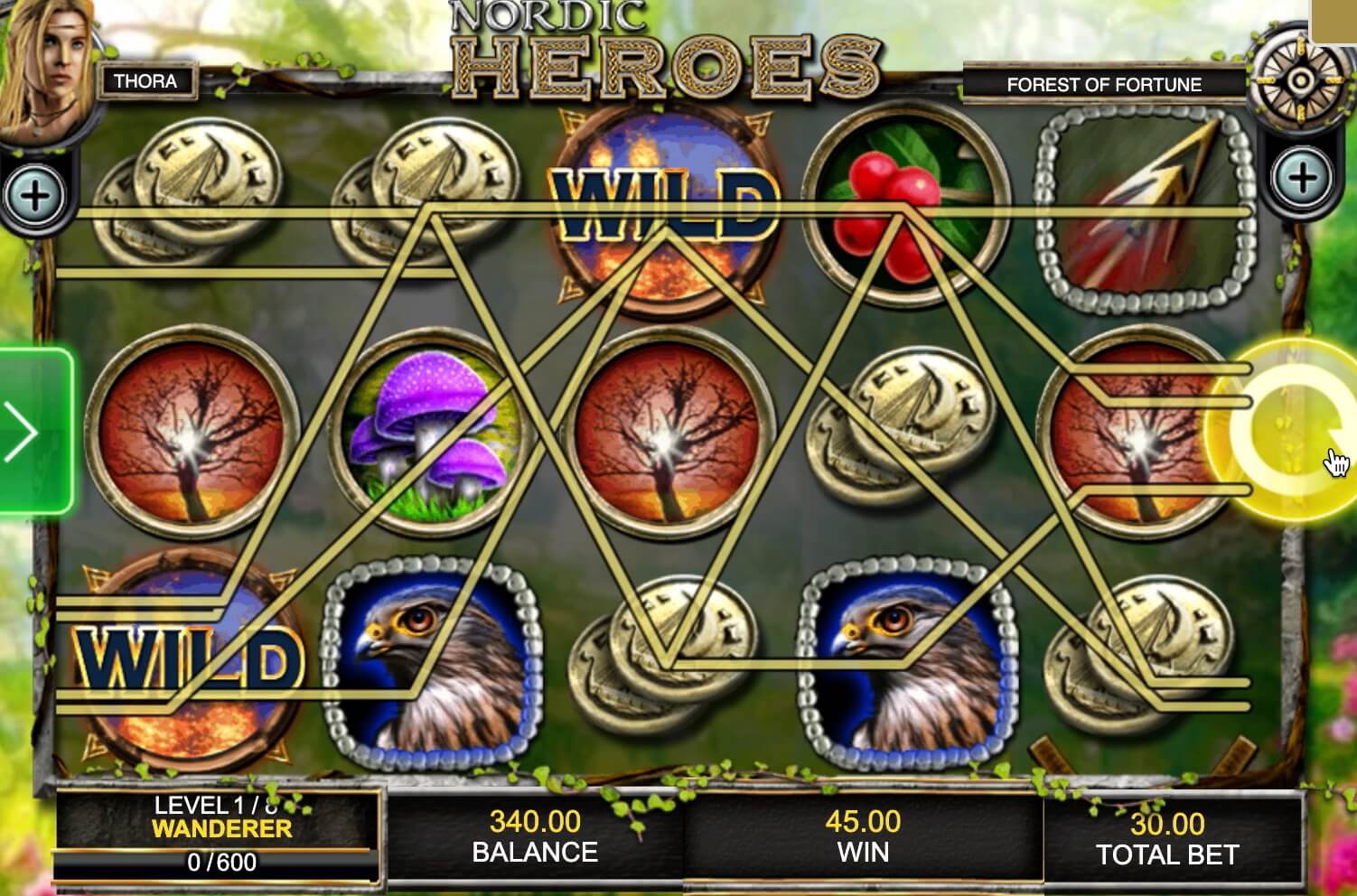 At the third level, which is called Explorer, you unlock the new character, Ragnar, equipped with Hammer, Wolf, Shield in three variants: regular, Spiked Shield and Flaming Shield. The fourth level, Adventurer, brings new weapons: Thora’s Fire Arrow and Ragnar’s Fire Hammer. Next three levels, Defender, Slayer and Hero, don't bring you any new weapons, they come with different kinds of perks. But after comes the last level, called Champion, and our characters get new powerful weapons.

Thora receives Ice Arrow, and Ragnar will be equipped with Ice Hammer during the fight. So basically, when you unlock all the two realms and both characters, you may choose the monster and the type of equipment your character will use. Each has its merits, so consider your choice thoroughly. 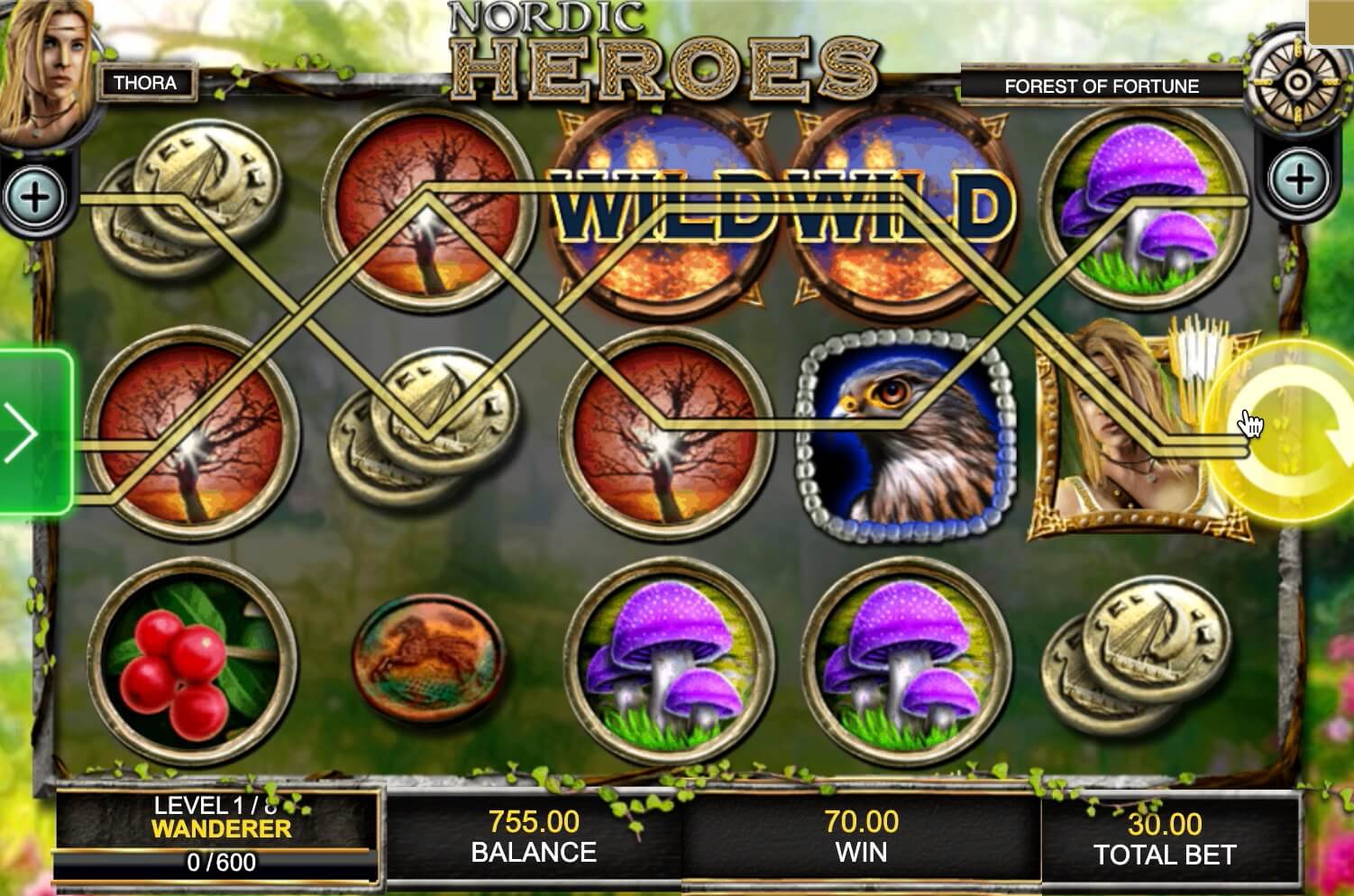 So how does the battle go? As we have said, after every free game a pair of extra battle reels spin: one for the beast and the other one will be yours. Each weapon can either cause damage, stun, or help avoid damage. Compare your tiles to see who wins the spin. Free games' session will go on until your avatar has enough health left. If you defeat all monsters, you will receive from 1 to 10 Victory Spins. The total depends on what realm you are fighting in, and at what level and who your avatar is.

But there are even more perks at the Bonus mode. And one of them is the Wild. Remember, we have barely mentioned this tile. And it’s only because it’s boring in the main game mode. When you play the Battle bonus at the Forest of Fortune, the Wild becomes the Roaming Wild. And it substitutes all tiles, including the scatters. When you meet the Wolf, your first opponent, it is just the Roaming Wild. 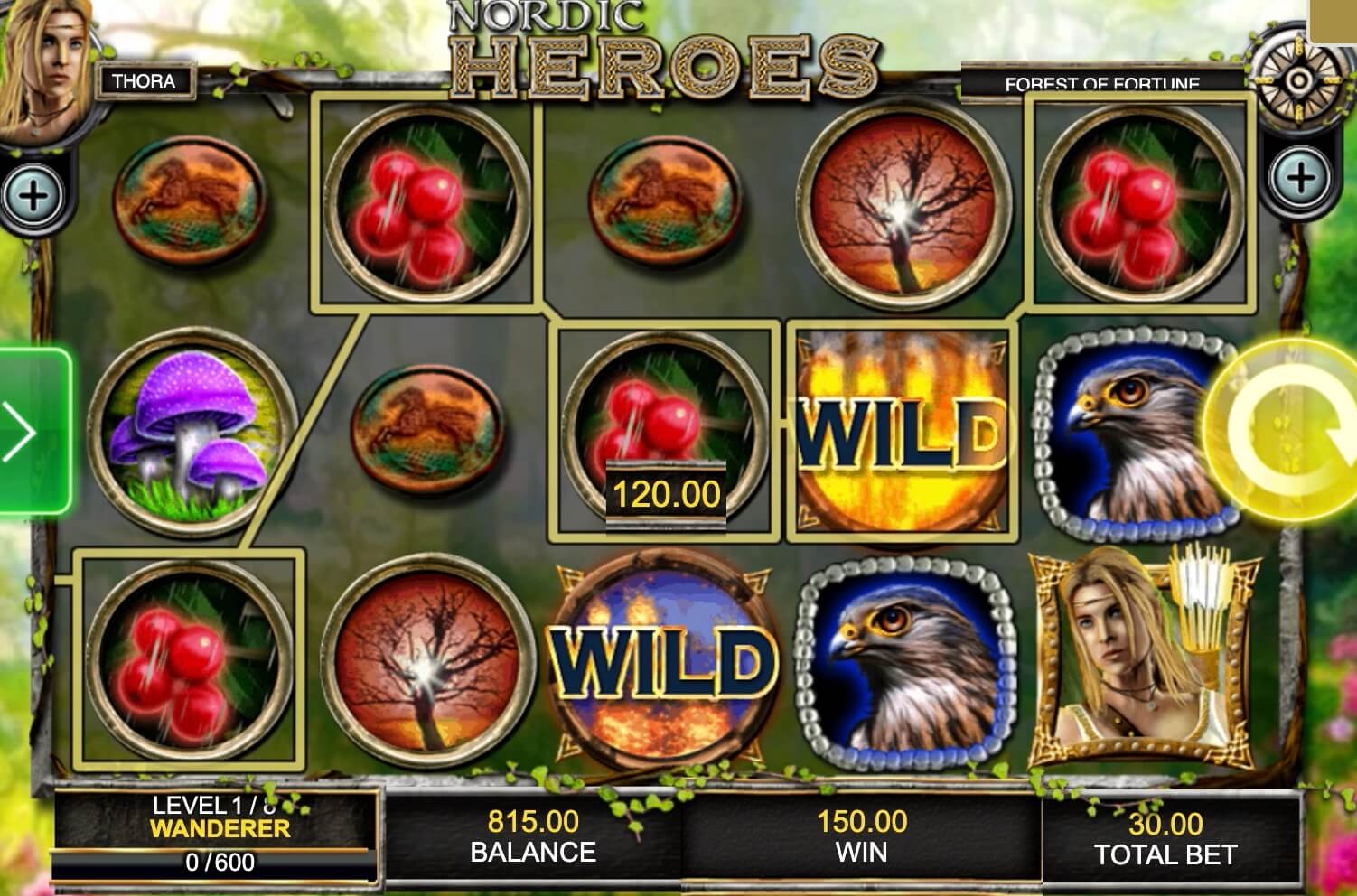 At the battle against the Boar, it comes with a 2x multiplier. And when you wrestle the Dark Elf or during the Victory Spins, the multiplier will be 4x. This Roaming Wild may hit any reel but the last one. When you are at the realm of Sea of Glory, the Battle Bonus features the Wild Reel, which is basically a stalked Wild.

When you fight the Crab, it may hit any reel. While fighting against the Squid, the Wild Reel hits on the reels one two and three. At the fight with the Sea Serpent and at the Victory Spins, the Wild Reel may hit all the reels. The Wild Reel doesn’t take place of any scatter. 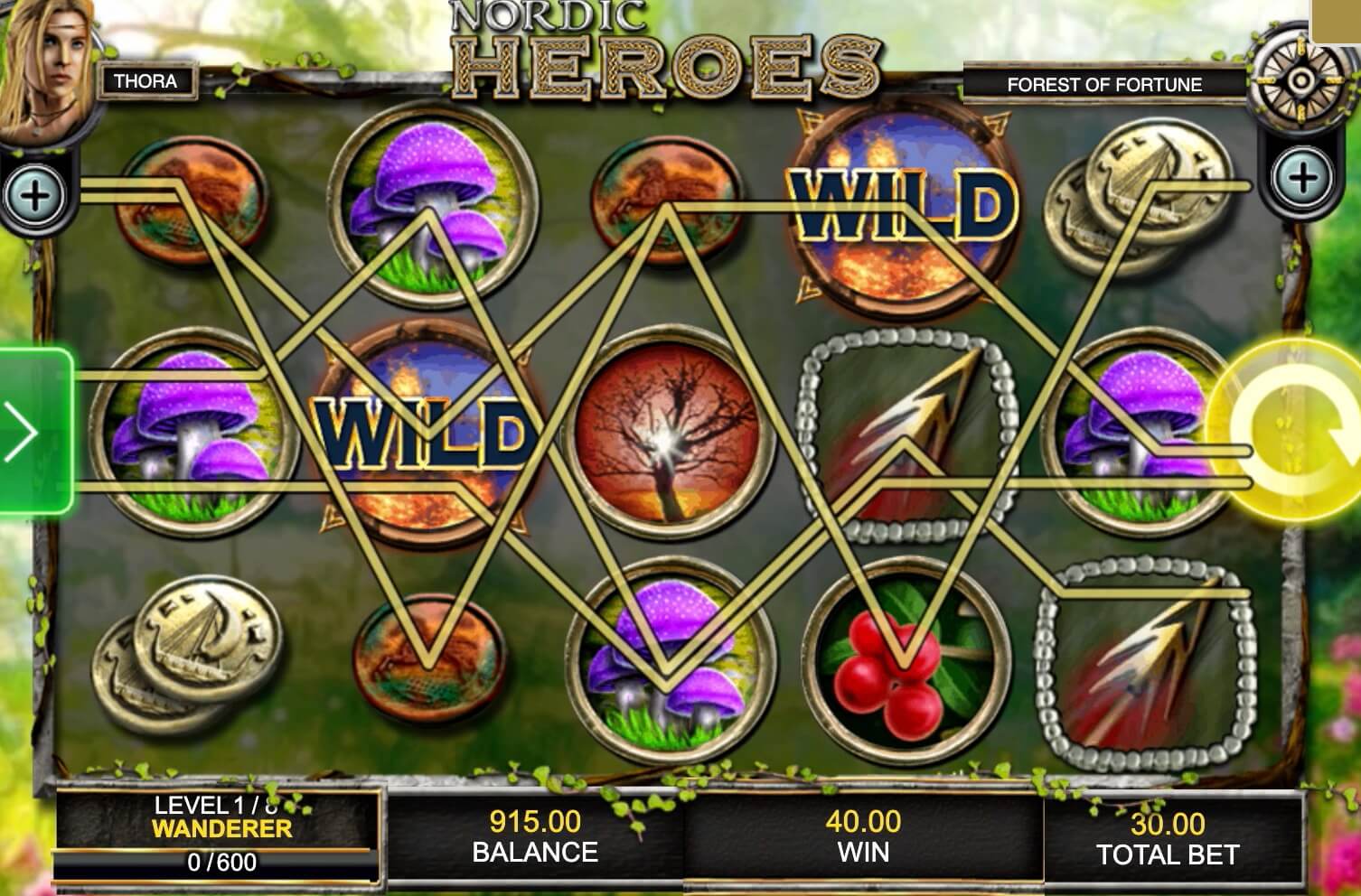 That’s a heck of a bonus round, right? But guess what, the perks are not over yet. Another great perk is Mystery Multiplier! Hit this fantastic extra after any regular game spin if it doesn’t trigger the Battle Bonus. When hit, a multiplying reel appears and then it spins to determine the multiplier for the win. What multipliers will be on the reel depends on your level! There may be any multiplier from 2x to 30x.

Finally, just a few words on betting and the interface. Unlike the overall gameplay, those two are a breeze. The interface is designed extremely cleverly, just a couple of buttons. You would understand how to handle them in a jiffy. As for the bets, they range from 30.00 per spin to 3,000.00 per spin. A fantastic range that suits any player. Literally. So if you are up for a challenge and in a heroic mood, pop up for a spin or two at Nordic Heroes! It’s a brainer, and it’s hot as heck!