Monopoly Bring the House Down

On Top of the Game!

Having a hard time to imagine how to mix Monopoly and a slot? No need! There is a great company, Barcrest, and they have already done it. Actually, they have designed several Monopoly themed slots and all of them are fantastic, if not with design, but with gameplay and extras for sure.

Monopoly Bring the House Down can’t boast some breathtaking visuals. The graphics are rather basic and remind of the arcade machines a lot. Design is not the selling point of this machine, but gameplay and RTP are. So let’s figure those out. 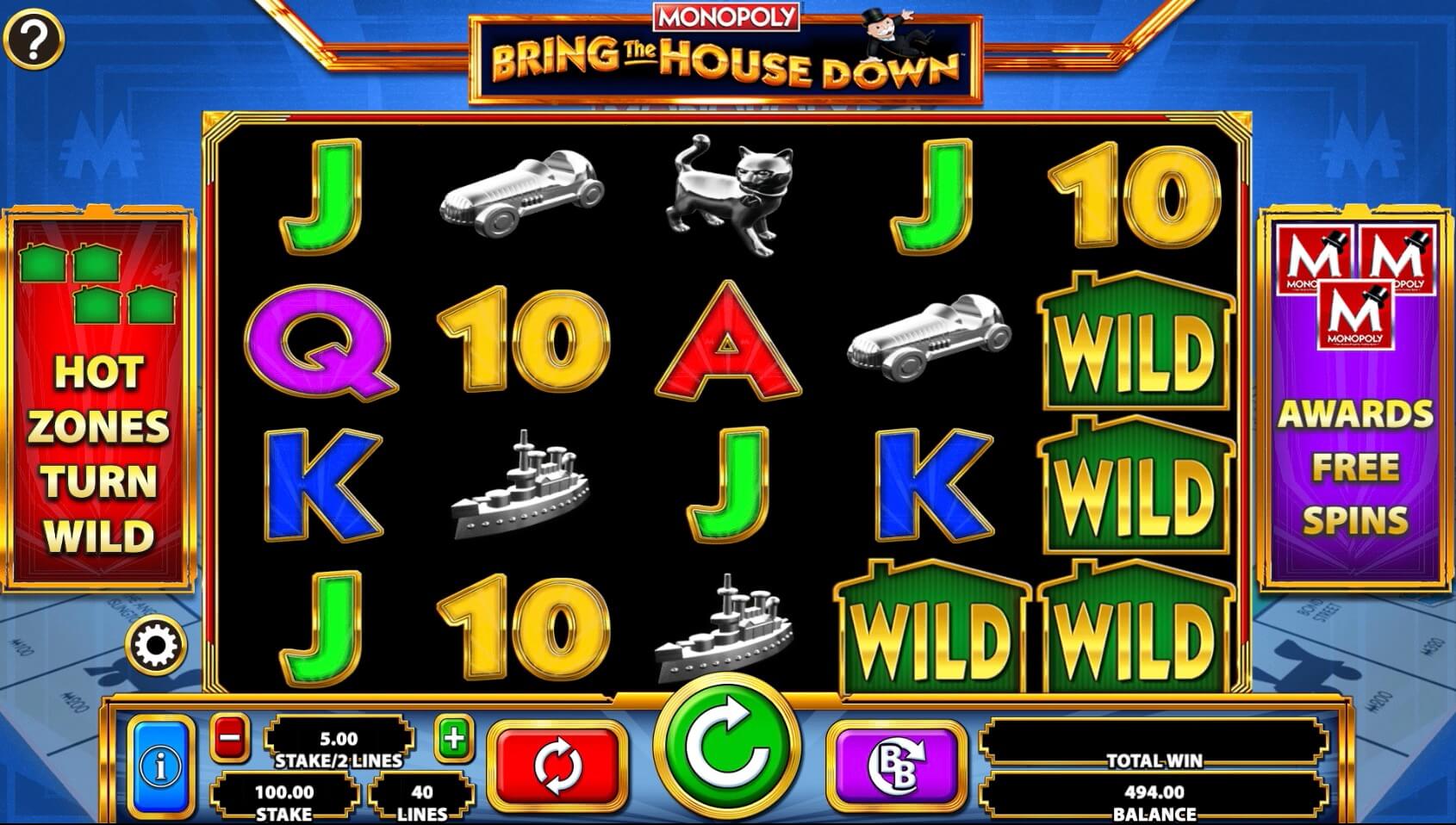 The slot has a standard layout of 5x3, with 40 fixed lines to bet on. Winning involves hitting a combination of identical tiles on a line. All combinations should start on the far left reel, otherwise they won’t be paid. Each combo has to comprise at least three tiles. The tops is five of one kind, obviously. All the tiles are either taken from cards or they feature Monopoly figurines.

So far everything seems to be pretty ordinary, right? Wait for it, this Monopoly slot is not that simple as it looks. The most significant feature that distinguishes it from the rest of the games is the fact that it features two game modes. 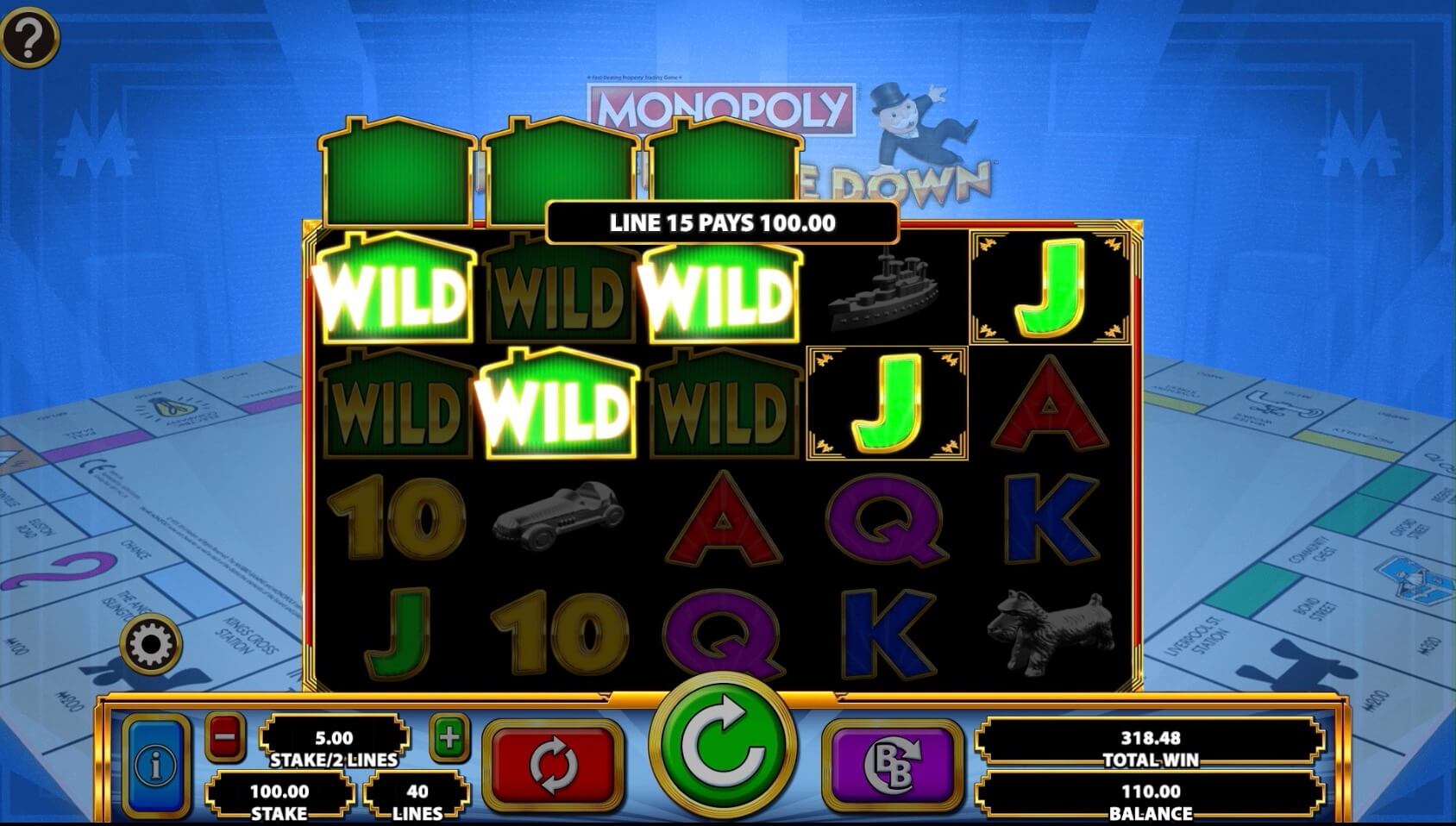 There is a standard game and the Big Bet mode. And it’s not some random feature you can activate if you hit a certain combo. No, you are free to activate any Big Bet mode any time you feel like it. So the regular game mode is like in any other slot: bet, spin, win and get paid.

The Big Bet mode is different, though. It is a session of consecutive spins you actually buy. It’s played on the same reels and with the same tiles, but the symbols feature different payouts. Plus, there are quite a number of extras to enjoy at the Big Bet mode. 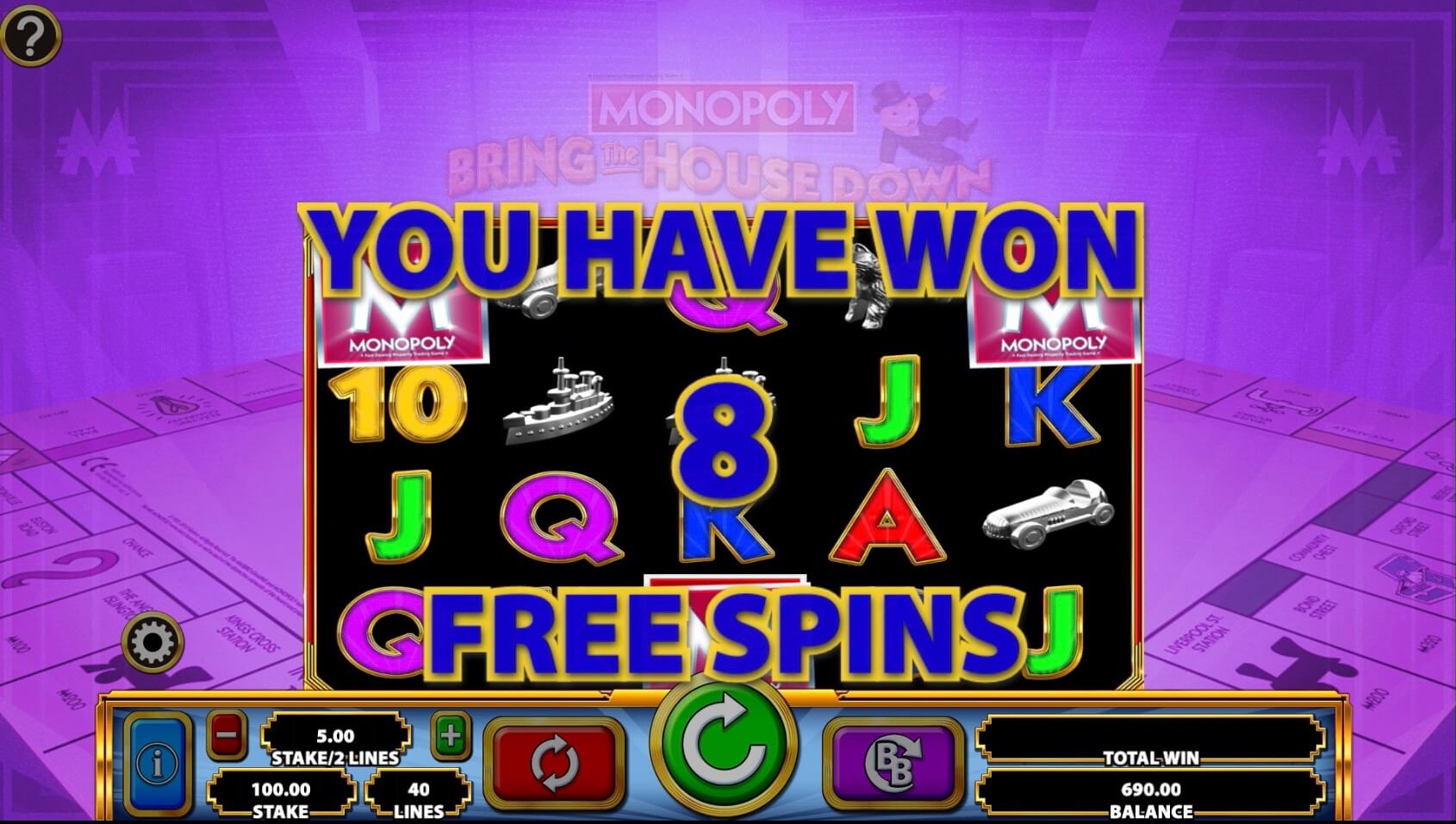 Yes, you heard us right; the tiles are the same but paid differently. Five icons are cards’ symbols, from 10 to Ace. The other four icons are Monopoly figurines: Cat, Dog, Race Car, and Ship. And the last tile is a Wild. At the regular game mode, 10s and Jacks are paid the same, 40x the line bet for five.

Five Queens are also paid 40x for the max combo. The payouts for Kings and Aces are identical, 60x for the max. As for the figurine tiles, five Ships are paid 60x, five Cats and Race Cars are paid 80x, five Dogs are paid 160x, and the Wild is worth 200x for the set of five. All regular mode payouts are multiplied by the line bet. 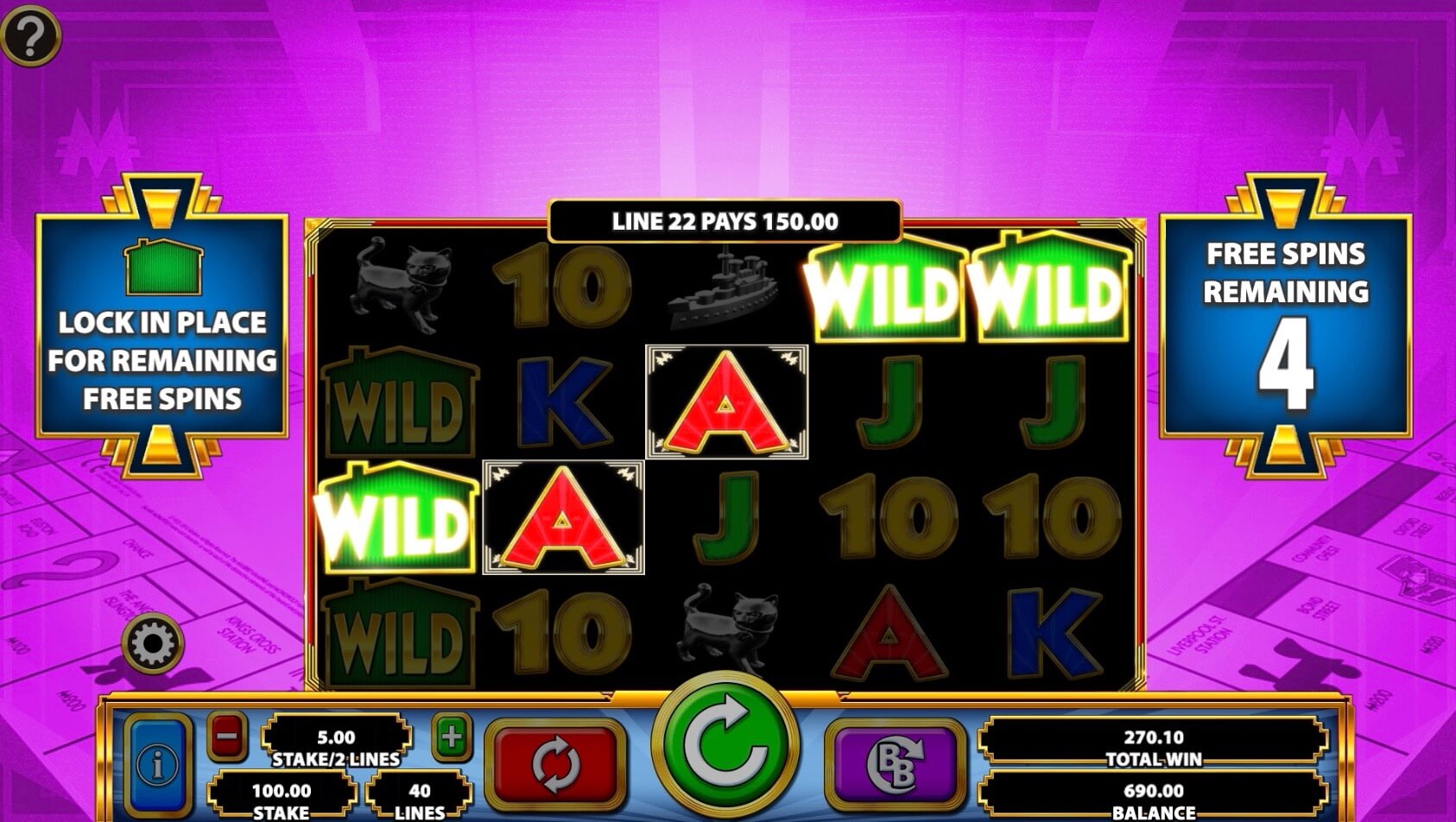 That was the regular game mode. The Big Bet mode is supposed to feature higher payouts, otherwise it wouldn’t be called big, right?! But the Big Bet payouts are weird, though. They are awarded in cash, no multipliers involved. For the max combo of five 10s, Jacks or Queens you get 1.00, five Aces or Kings awarded with 1.50. 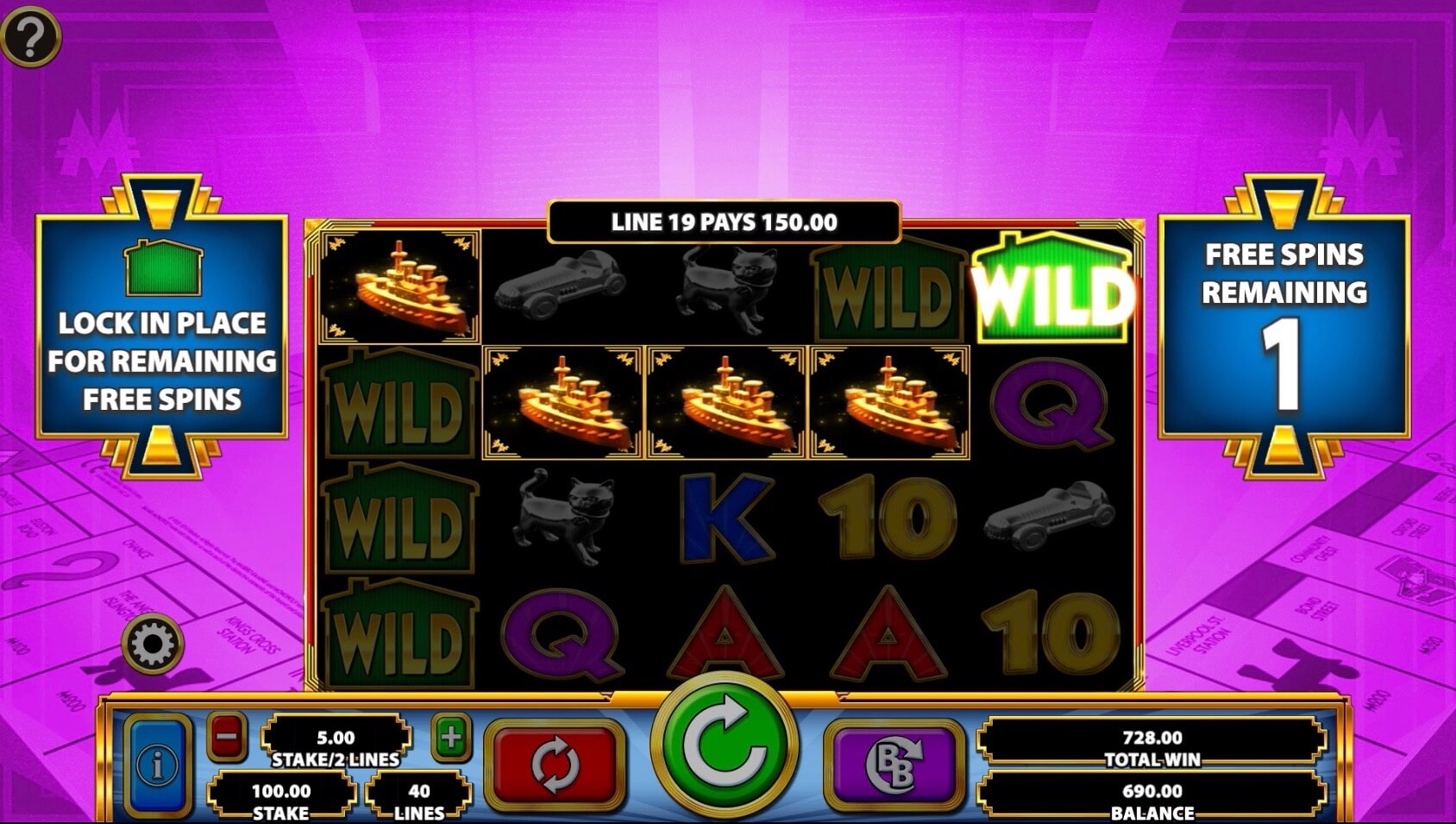 Payouts are somewhat tricky at the Monopoly slot, as some tiles have identical payouts for the max combos, but payouts for smaller combinations may differ. So keep an eye on those inconsistencies. The Monopoly slot betting is a bit tricky too, as you stake one coin per two lines. One coin may be worth from 0.01 to 25.00, thus the total spin bet is worth from 0.20 to 500.00. 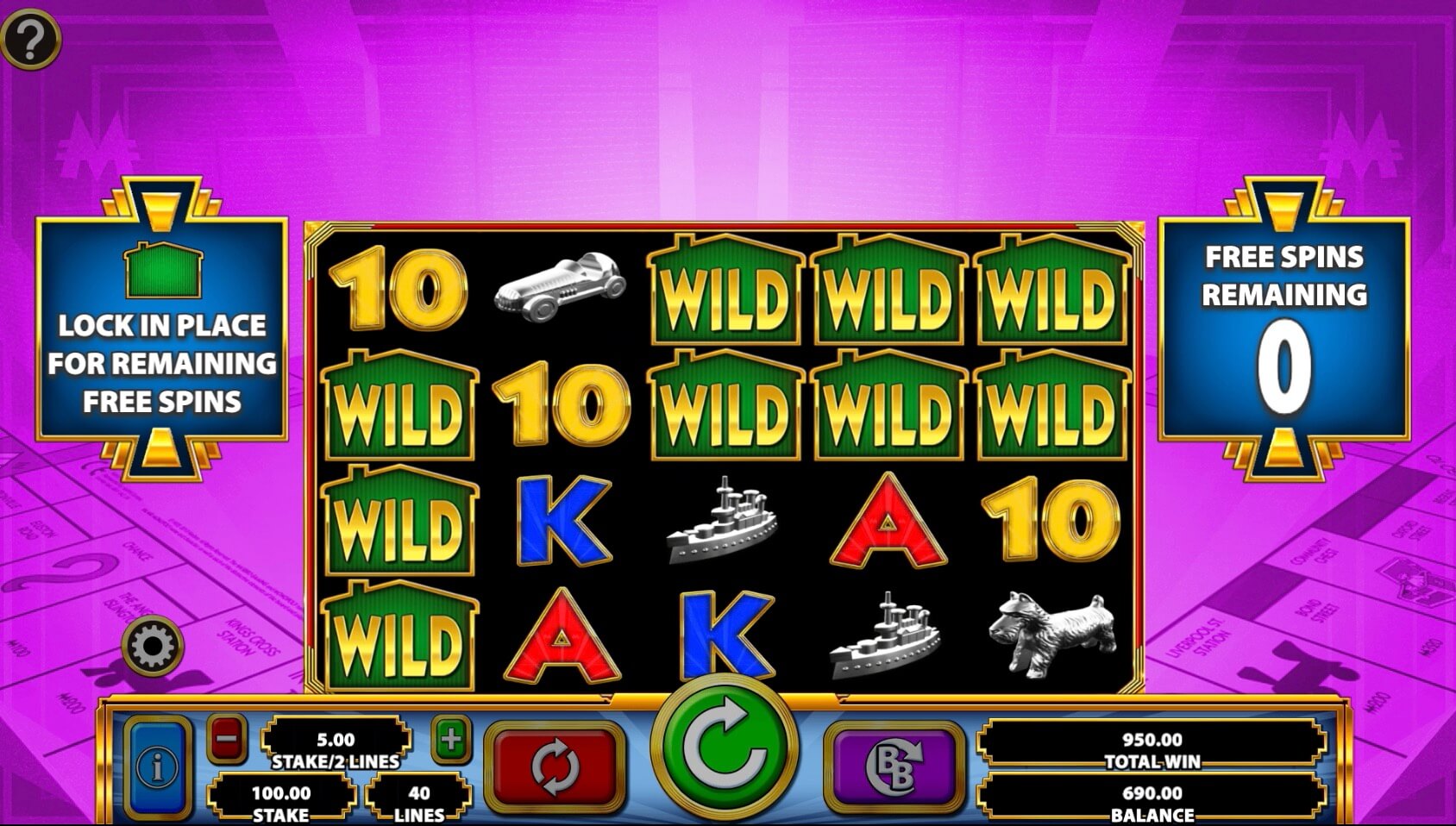 What bonuses are there to pick from? First, the Hotel upgrade, which turns all regular Hot Zones into the Hotel Hot Zones. This perk carries over into the Free Spin session, if it’s hit. The second option is ‘Every spin is a winner’ perk. Thanks to it, each of your spins at the Big Bet mode will result in a win. The next perk is ‘Win Elimination’, and this feature simply removes the lower paid tiles from the reels.

The feature carries over into the Free Games as well. Scatter Wild is another perk. Thanks to it any Scatter that lands on the reels becomes a wild and stays fixed till the end of the session. There are also some cards with Extra Spins. Originally, there are 5 spins in the Big Bet game, but with the Extra Spins you may get six, seven or even eight successive spins. 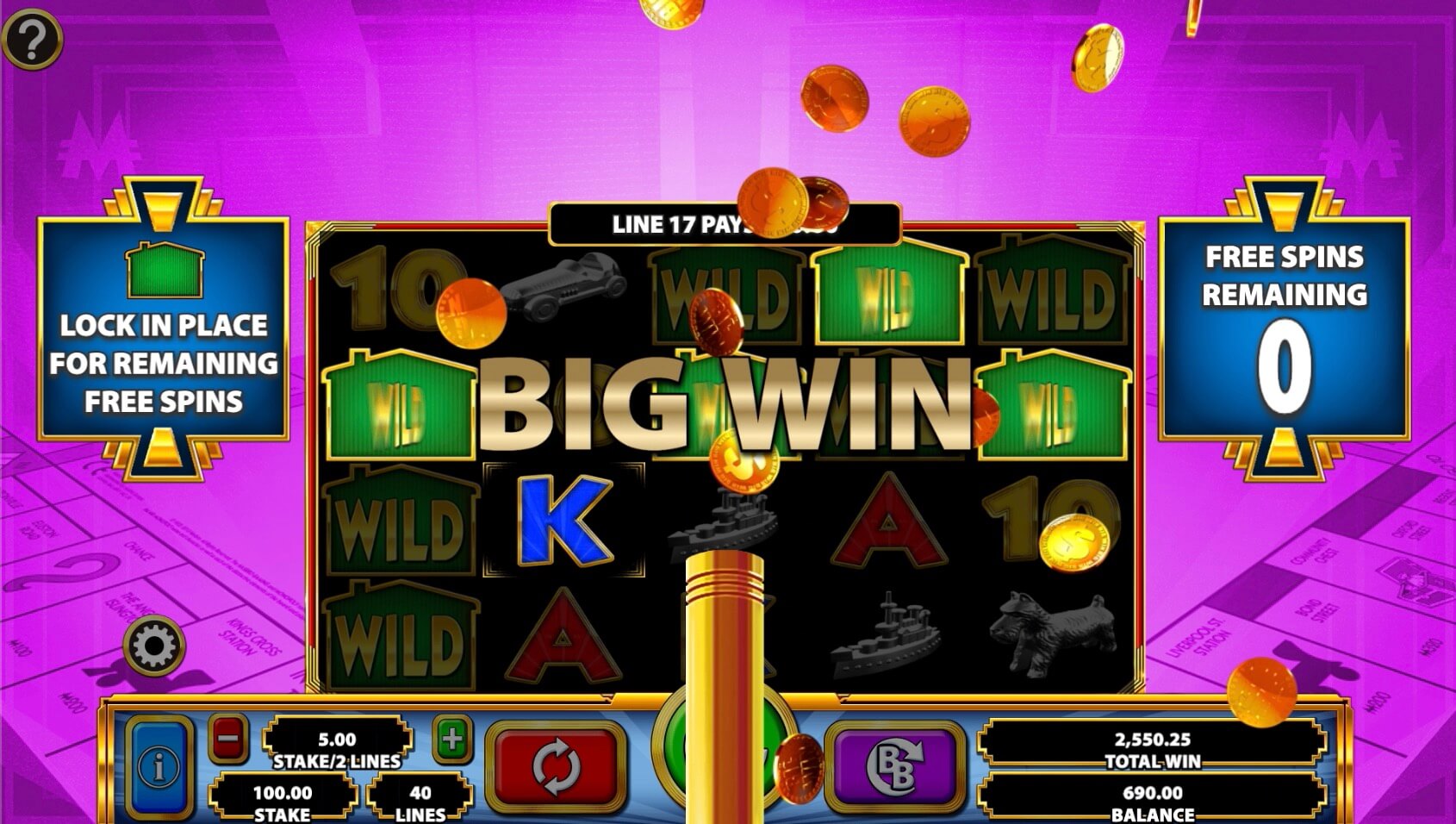 And the final bonus option is the Instant Win cards with cash wins. Those will be credited to your account right away. The max coin win available on community chest cards is worth 50.00. But the most awesome thing is that you may trigger Free Games while playing a Big Bet session. Speaking of which...

The Monopoly symbol tile is the Scatter of the game. It awards you a free spins’ session whenever you hit three of those. For three Scatters you will get eight spins on the house. Remember, the Scatters appear on odd reels only. 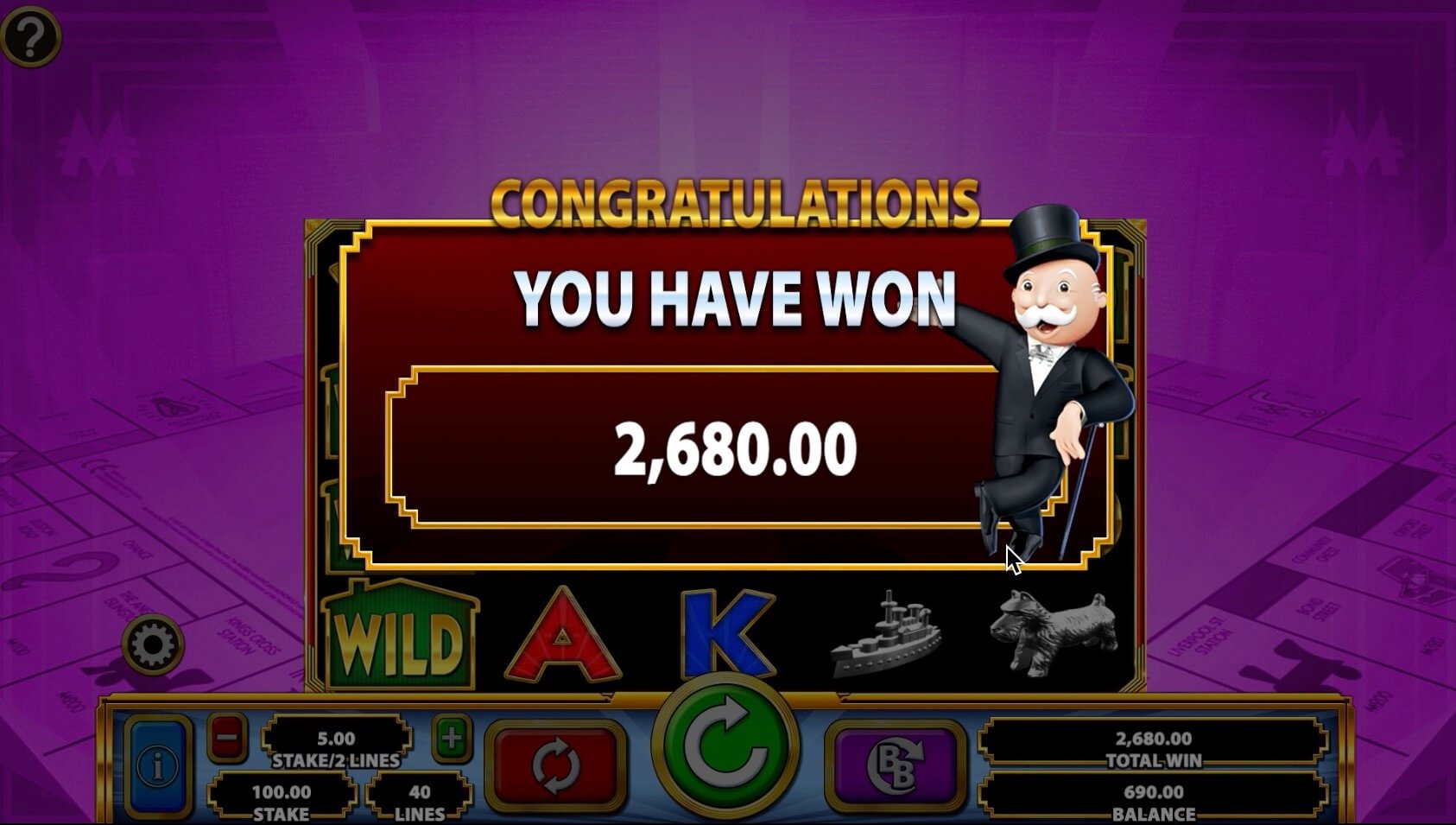 During the Free Games the House and the Hotel Hot Zone figurines act as Wilds and once they have landed on the reels they stay fixed for the entire Free Games session. The feature can’t be re-triggered, though. But there are more bonus features to come, so stay tuned. 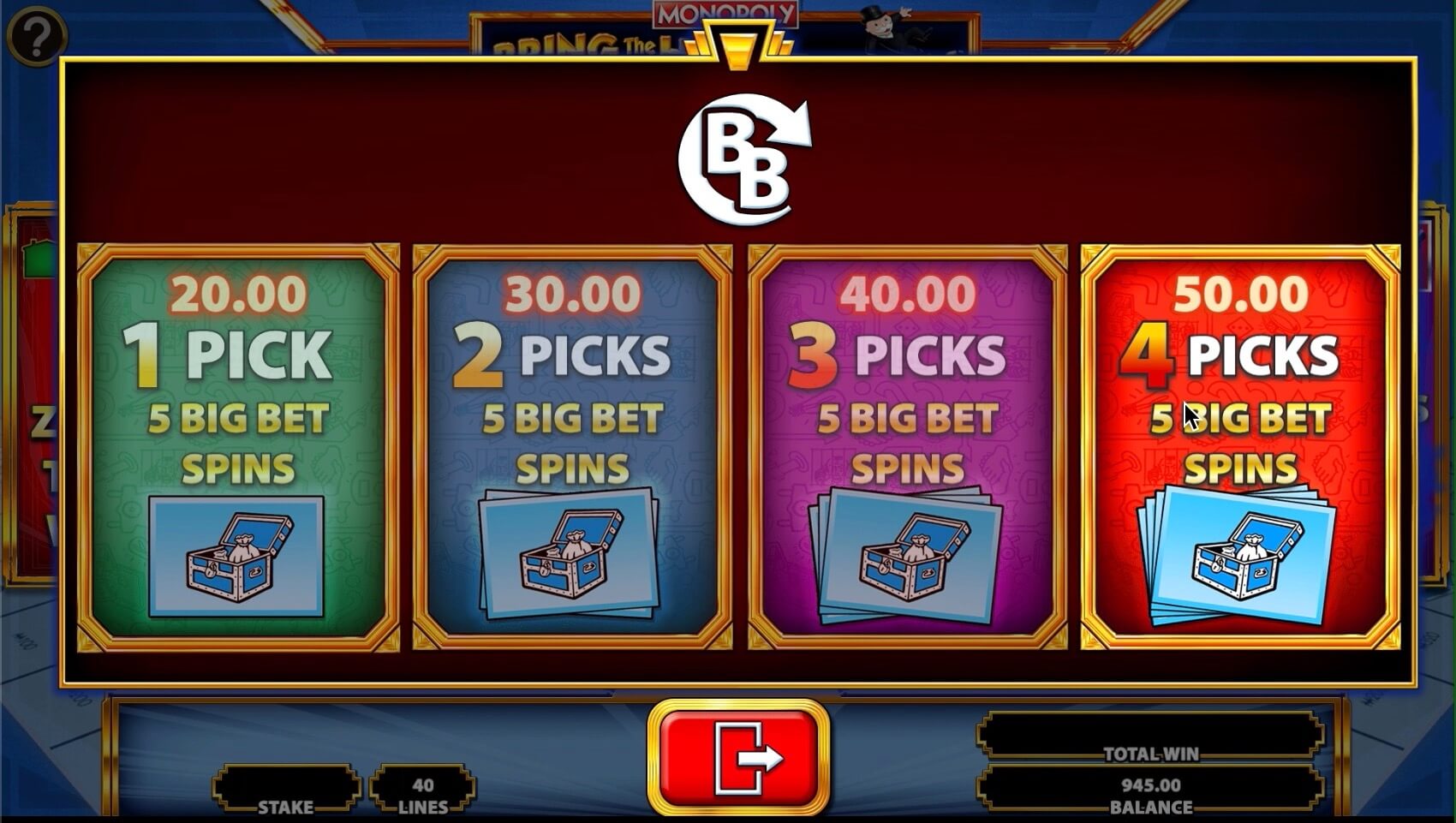 Another awesome bonus perk is the Chance Card. It’s completely random and usually appears after a spin but before the winnings are evaluated. The Chance Card comes with three hole cards to pick from. Behind each card there is a Hot Zone figure. The one you have picked will be dropped onto the played reels randomly, and then the total spin winnings will be evaluated and paid. 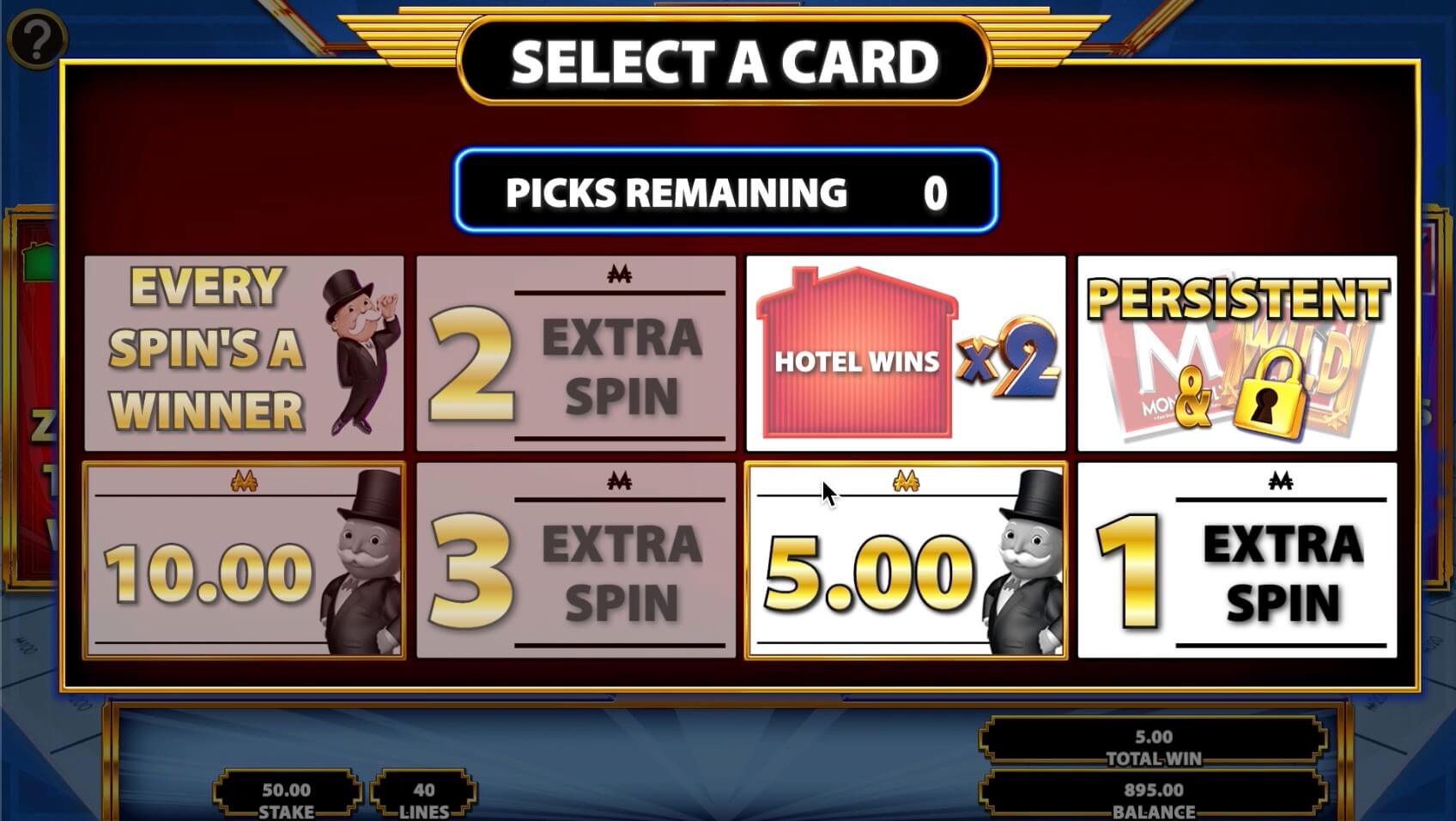 Selector Feature is one more perk to watch out for. It works just like the previous feature: any Hot Zone figure is dropped onto the reels randomly after the spin, but prior to the payout. You may either collect the pattern within 3 seconds or wait until it passes on. After the timer is up, the new figurine may appear. After you have made your choice on the Hot Zone symbol, it will be evaluated and added to the spin winnings.

Now you see what we mean by fantastic gameplay and extras, right?! It’s hard to keep track of all the features available. But it’s totally worth it. This game has the juiciest RTP ever. In the Big Bet mode, it reaches over 98%. Can you imagine that? Well, the good thing is you don’t have to! Just log in and see for yourself!