Mirror Mirror on the Wall, What’s the Best 243-Ways to Win Slot of All?

Once upon the time there was a gambler who tried all the 243-ways slots and failed to find the hot one. The end. Sad story, right? And not true anymore, thanks to the Netent’s Mirror Mirror.

Mirror Mirror is a five-reeler based on Snow White’s immortal story, hence the name. Pretty straightforward, but so be it. The layout is standard: five reels, three rows and standard 243 bet ways to win on. If you are not acquainted with the concept of the no-payline slots, those are the slots that offer you to win by hitting a combo of identical symbols just on the adjacent reels instead of the lines. 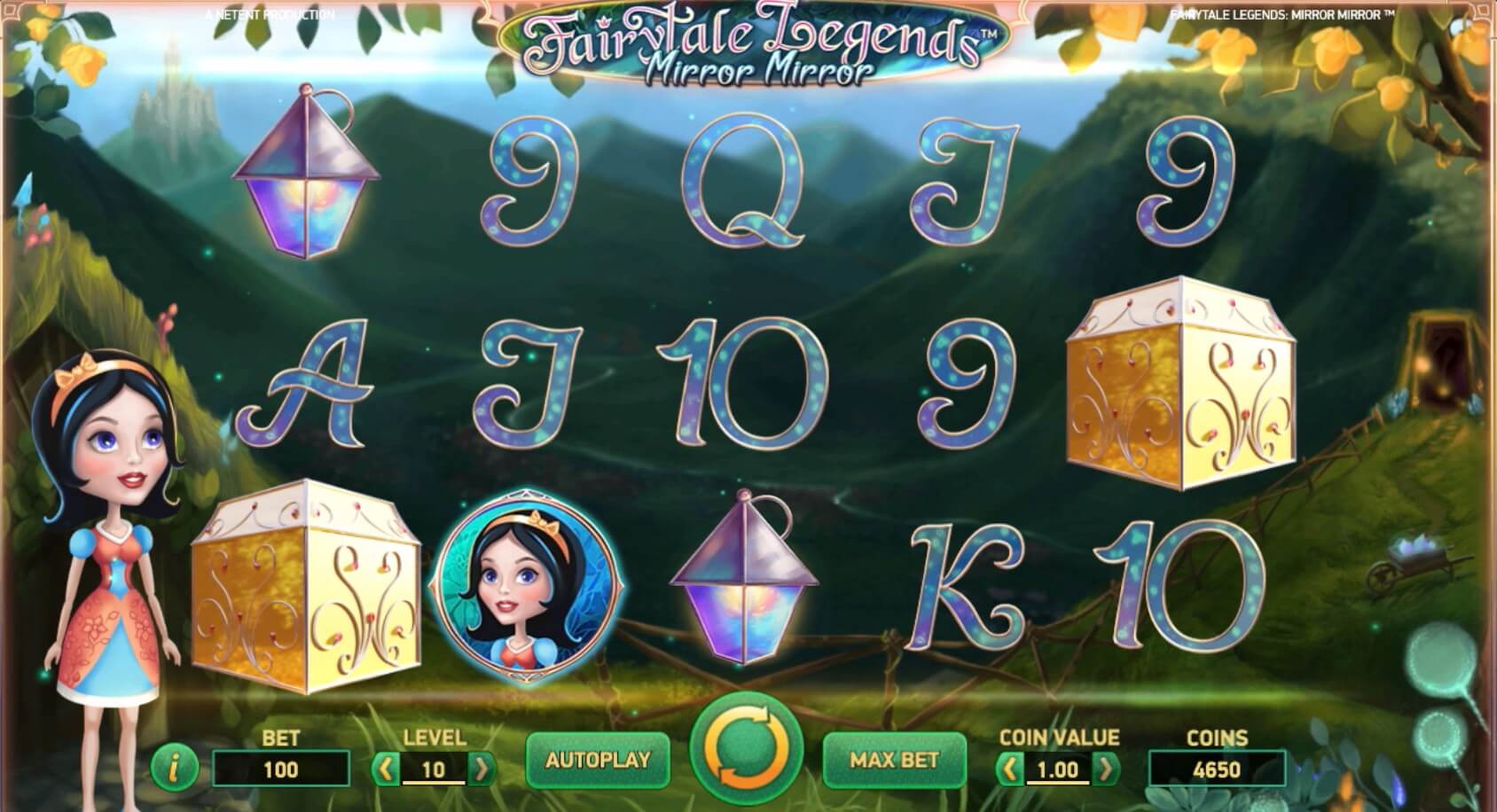 So the first tile has to land on the first reel on the left. That’s obligatory as all the wins are paid left to right only. The second tile lands anywhere on the second reel. The third hits the third reel, once again it doesn’t matter what stop it lands on. And so on. The minimal combination of tiles is three of one kind, the max combo is the five of a kind, obviously.

The tiles at Mirror Mirror come in two variations. First, there are lower-paid paysymbols borrowed from cards. There are six of them, from 9 to Ace. Five 9s or 10s are paid 15x the coin value. The rest of the card-tiles, Jacks, Queens, Kings and Aces, are paid the same: 25x for the set of five of one kind. 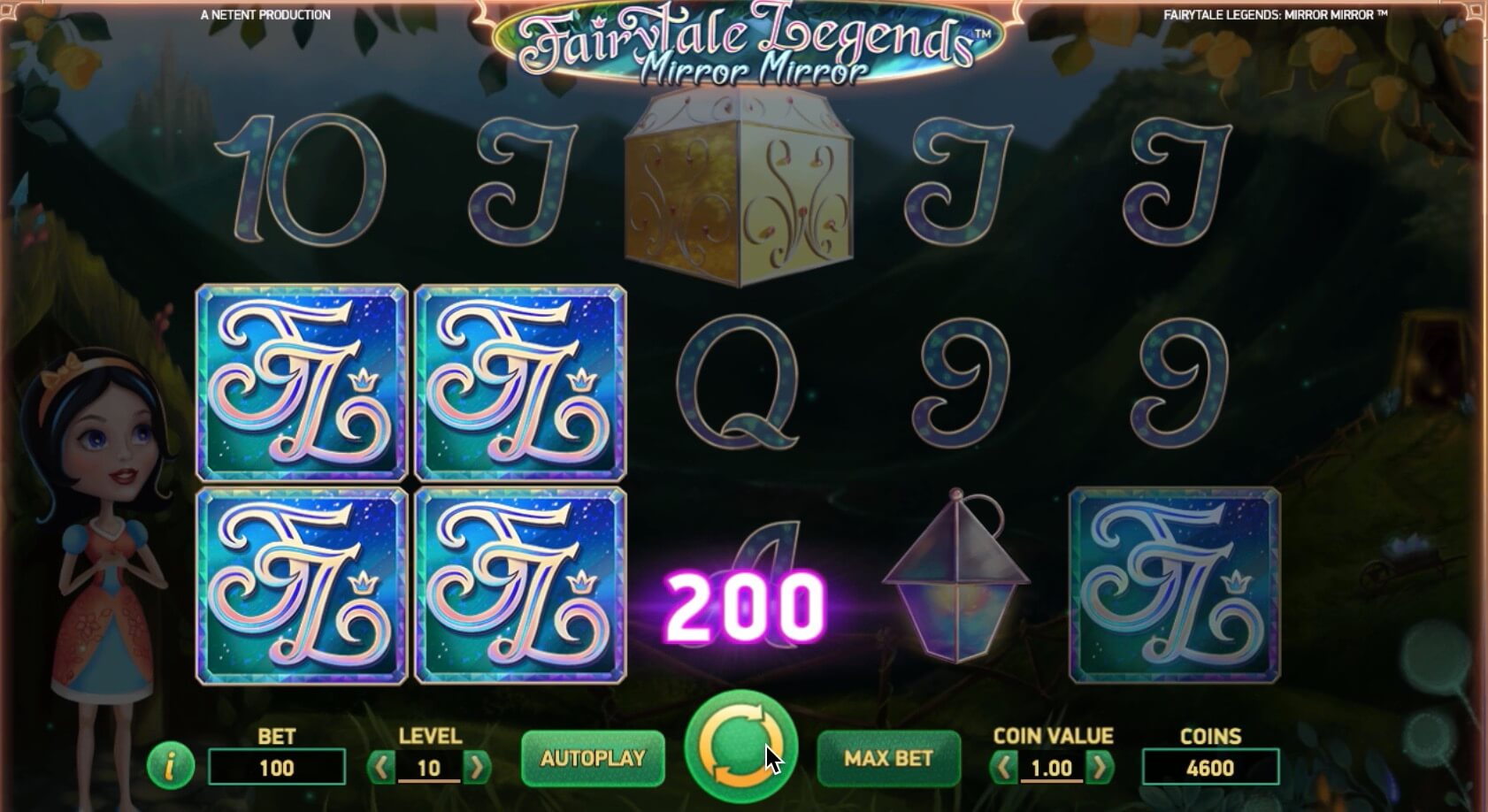 Other paysymbols are unique to the slot. There are Lantern and Crystals. They are paid 50x for the max combo. The Princess and the Queen tiles are worth 75x for the set of five. The last tile is a bit unusual. It’s a tile with the game’s logo, and the most peculiar thing about it is that its minimal combo is just two tiles of one kind. It’s paid moderately, though, only 5x the coin value. The max combo of five will be worth 150x.

As you can see, the main game mode is absolutely standard, if not boring. But we haven't mentioned the extras yet. Those are some piece of work, so buckle up. First there is a re-spin extra. To activate this feature, wait for the Mirror tile to appear. In the main game mode, it lands on the middle reel only. 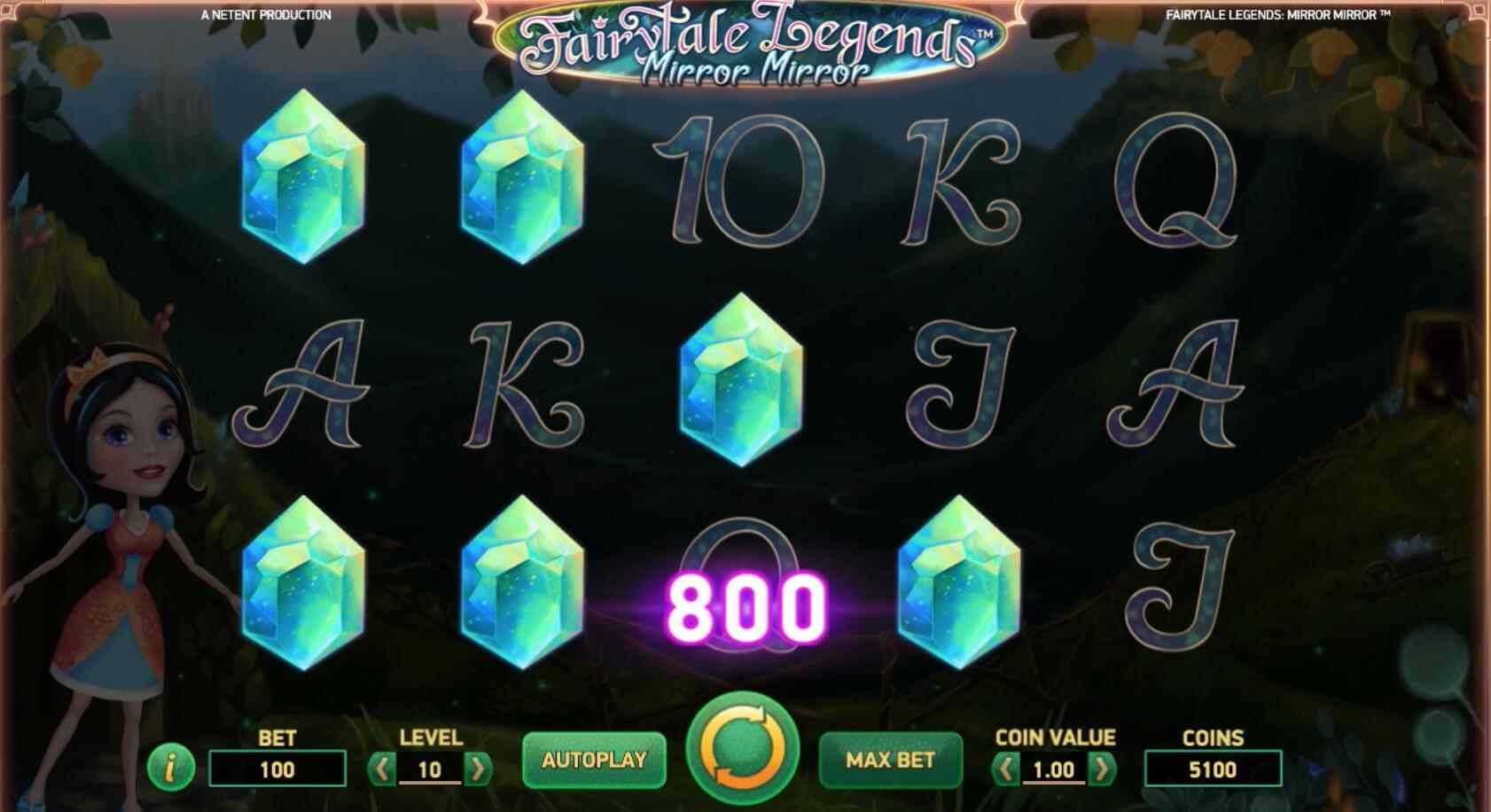 But if you are in the Free Games mode, then you have a chance to hit in on the first three reels. After the mirror symbol appears, it may turn either into a Queen or into a Princess tile. And the best thing is that they will remain in this position, fixed for the entire re-spin session.

Another great perk is the random bonus feature. There is no special tile or tile combination behind it, it is absolutely random. It comprises three possible features. First is the Fairy Magic Spin. For this Magic Spin five or seven stops on the grid get overlaid with randomly chosen higher-paid tiles. Only the game logo tile is excluded from his perk. This overlaying combo stays fixed for one spin. 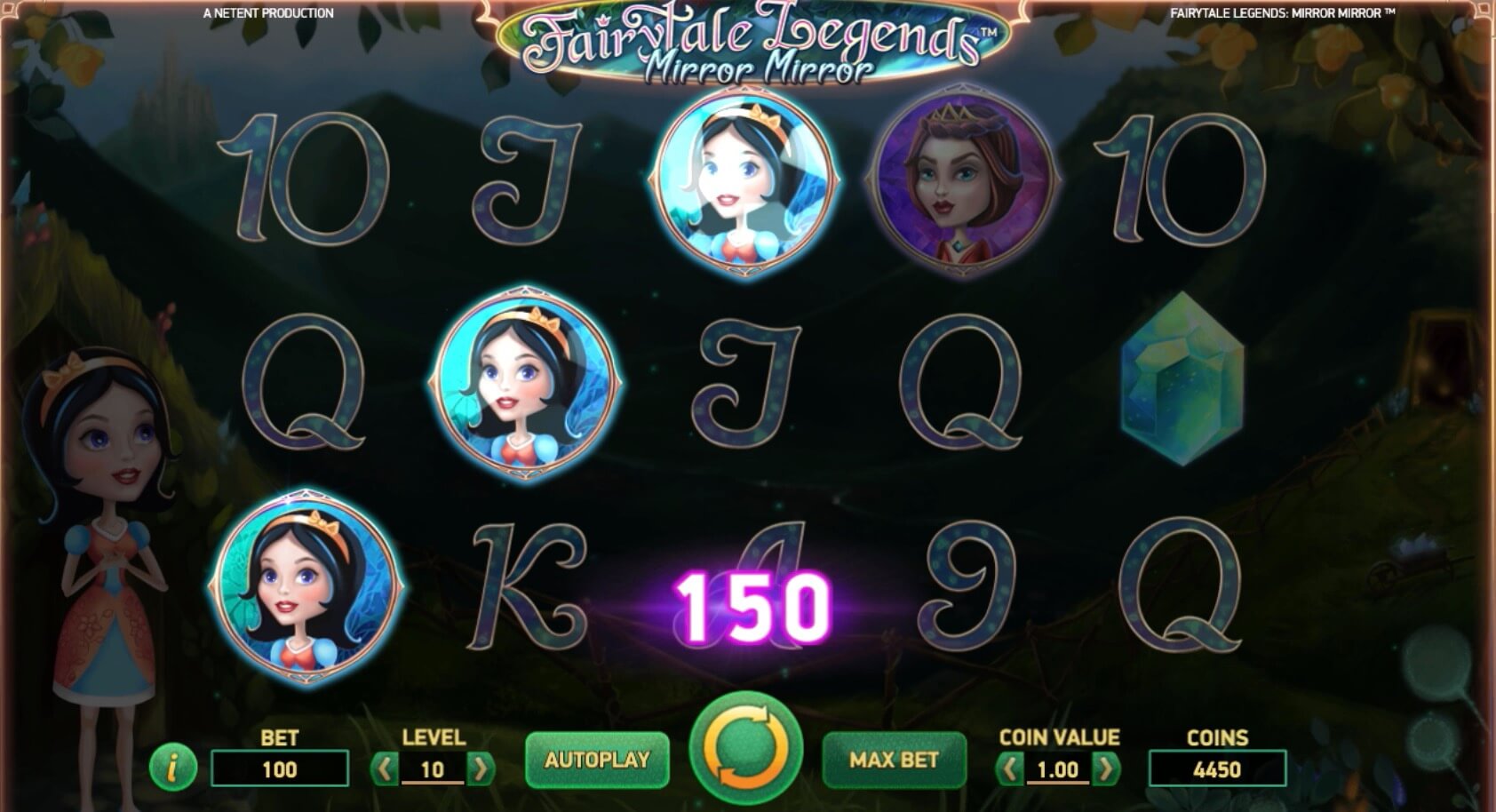 The second perk is Fairy Surprise. It gets activated if you hit a series of no-win spins. During the feature one tile is selected randomly, and then all symbols, starting from the lowest-paid ones, will turn into the selected tile one by one, until there is a win. The third feature is the Fairy Mirror game. When activated, this feature places the mirror tile in the middle of the third reel, thus activating the Mirror Re-Spin session.

But the perks are not over yet. The next only is the Bonus game. It is activated by the tiles with golden chests on. They may appear on odd reels only. If you hit all three of them in one spin, one of the bonus games begins. There are three of them. Mining bonus is when you have to break crystals with a pickaxe. There are nine crystals, each stuffed with a coin win. 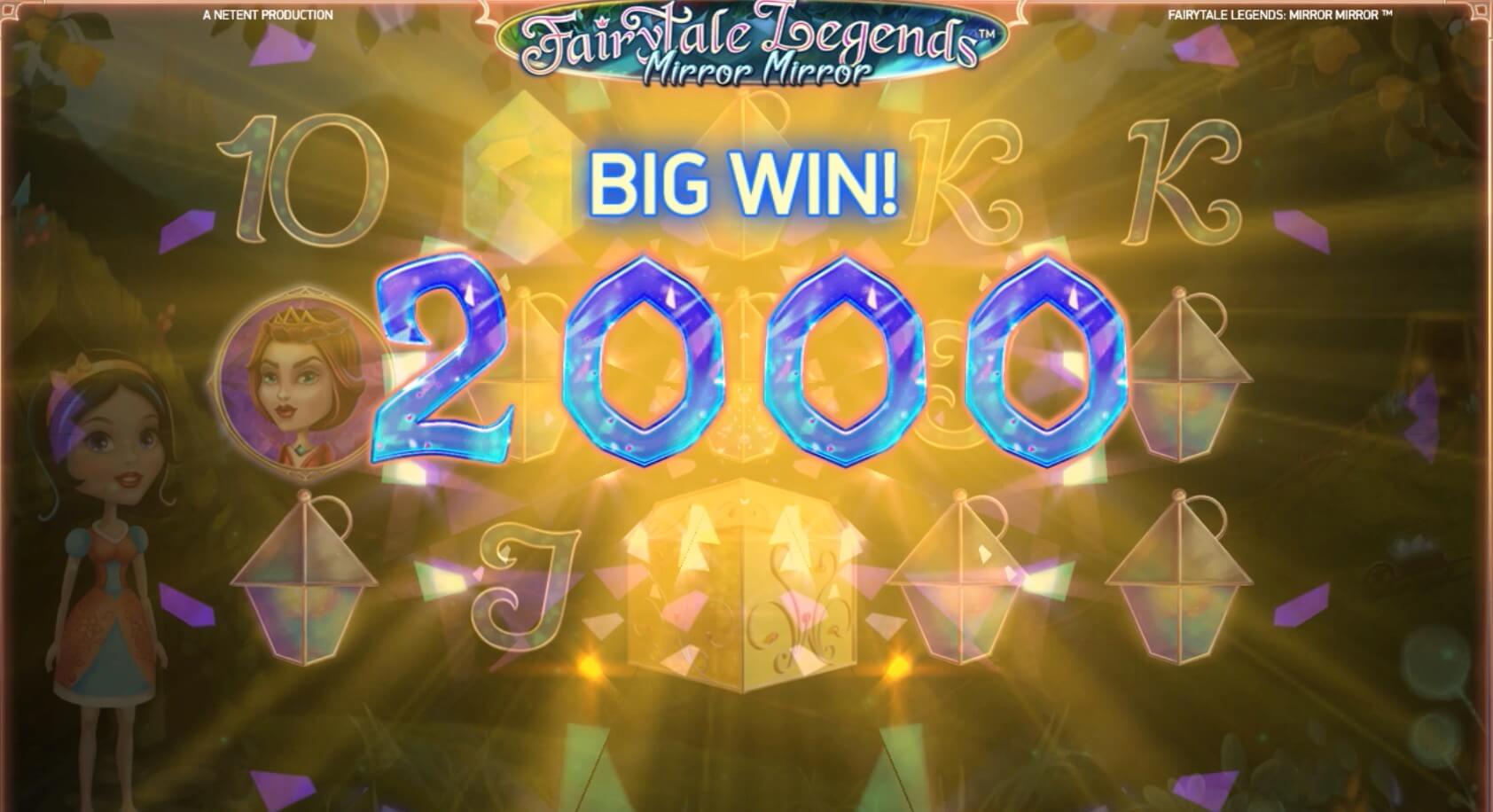 Now when you know everything about the bonus features, let’s take a quick look at the user’s interface and the betting in particular. Netent has a very peculiar betting system that gamblers sometimes find confusing. To make a bet at Mirror Mirror, first pick a coin value. The range is from 0.01 to 1.00. Then select the betting level. There are ten of those. 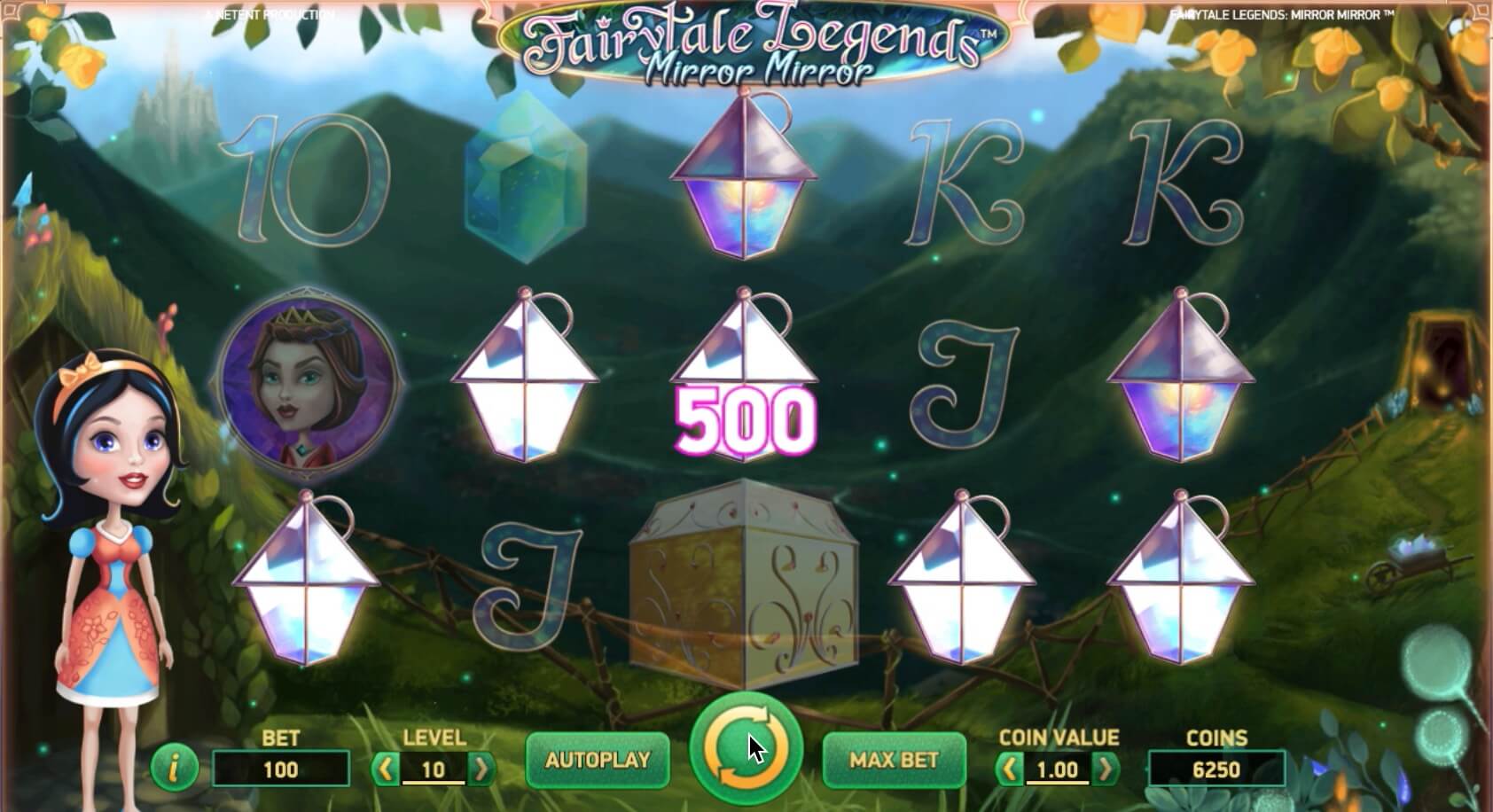 You bet ten coins per level. So at the first level you bet 10 coins, at the second level you bet 20, and at the tenth level you bet 100 coins per spin. All those adjustments are made with different buttons. And if you press the Bet Max button, it will automatically change the betting level to the tenth, but it wouldn’t change the coin value at all.

Mirror Mirror is a real treat. It has plenty of bonus opportunities, nice payouts, and a betting range that suits most players. It’s like a dream came true. Now all gamblers may live happily ever after, no sweat. The end.