Can’t Take My Eyes Off You…

Gamblers who are into the Greek Mythology are going to love today’s slot. Frankly, there are plenty of machines themed after the history of Ancient Greece. It’s a yummy topic with plenty of heroes, gods, beauties and fighting. Today’s slot is themed around one spectacular figure, a monster, Medusa.

She, along with her sisters the Gorgons, was able to turn people into stones and water into ice with just one look. And some say it was not because she was scary. It’s the other way around. She was way too luscious to look at with a naked eye. 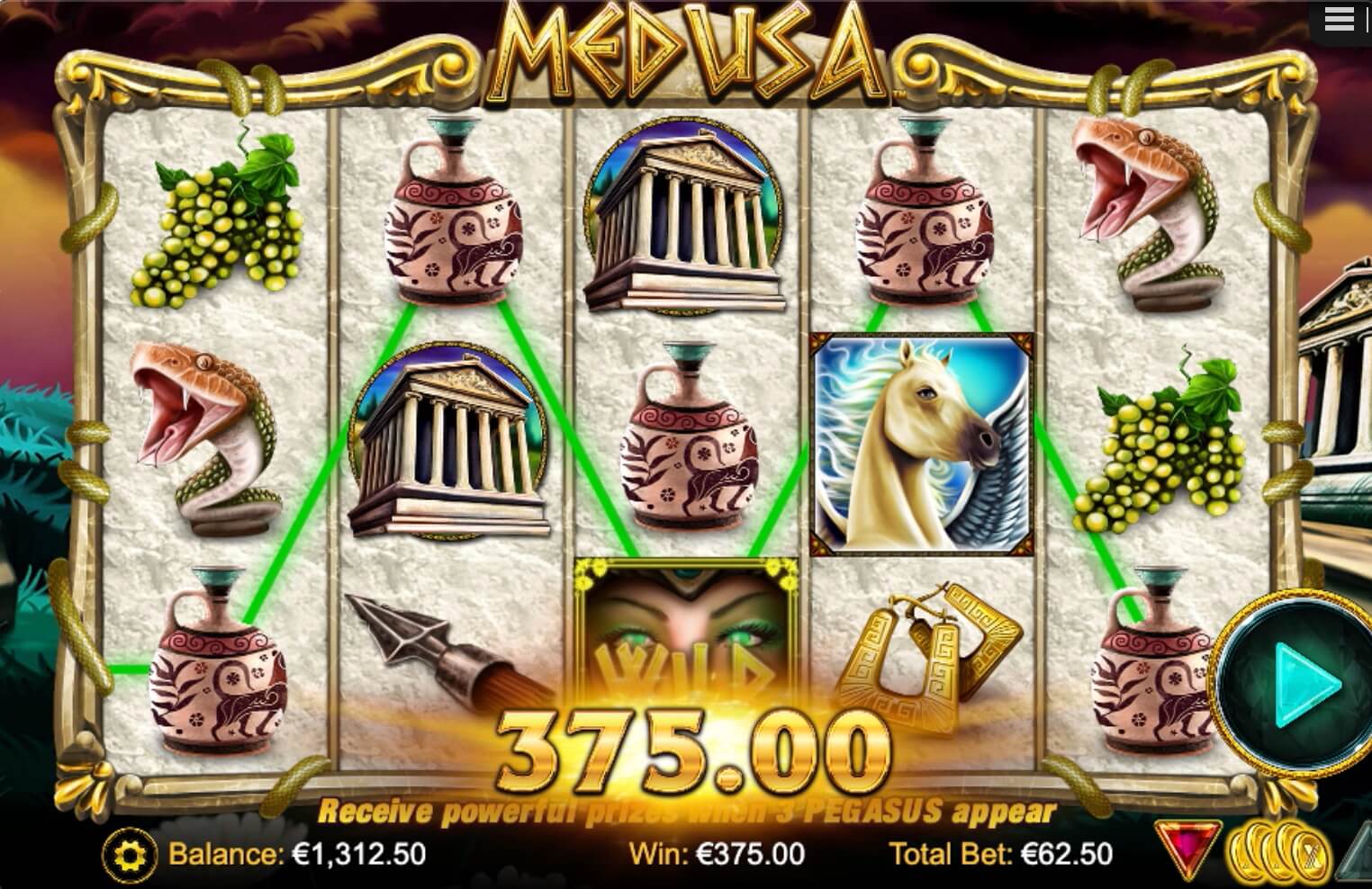 Nextgen pursued this belief and created a wonderful slot devoted to this mysterious and captivating Medusa. They pictured her in all her beauty and all her intimidating splendor. Care to take a look?

The slot features 25 fixed lines over the standard 5x3 reels-grid. The gameplay is perfectly standard. You can’t pick the lines, so just adjust the wager. It may go from 0.01 to 2.50 per line. Thus, the total spin bet is from 0.25 to 62.50. The numbers are modest, so the lowrollers would definitely enjoy spinning Medusa. It’s safe for the bankroll. 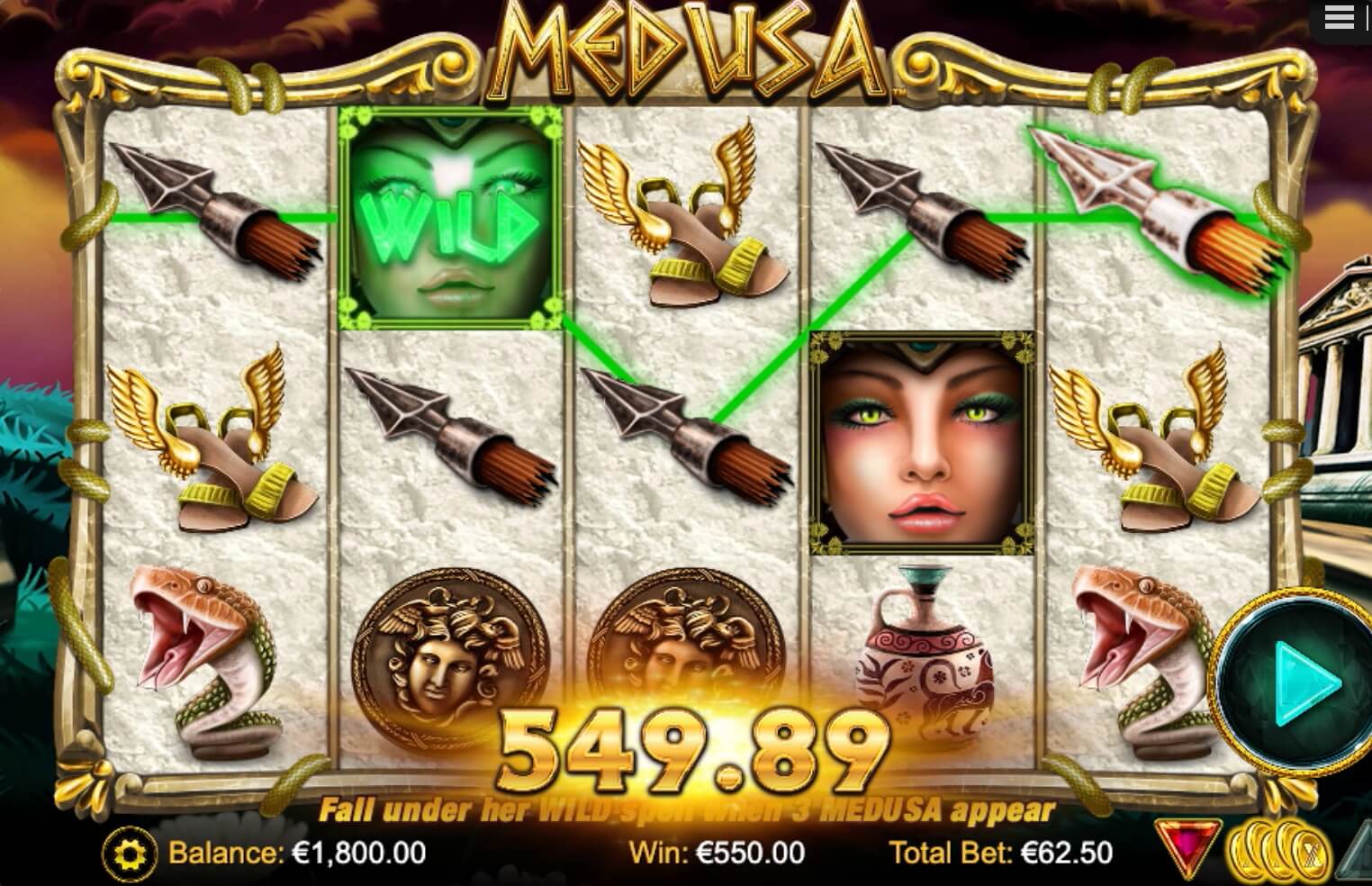 After the bets are made, just spin the reels and wait for the outcome. Your main goal is to land the combination of identical icons on the lines starting from the leftmost reel. There have to be at least three tiles of one kind in a combination. The maximum combo features five tiles of one type. The wins are paid according to the paytable. If you hit several winning combos in a spin, they are to be summed up.

The lowest-paid tile in the slot is a Spear. A combination of five is worth 100x the line wager. Five Grapes or Jugs are paid 150x. Sandals or Earrings are worth 200x for five. The max combo of Snakes or Medusa Coins are paid 500x. There are two more tiles, but they are a bit unusual. 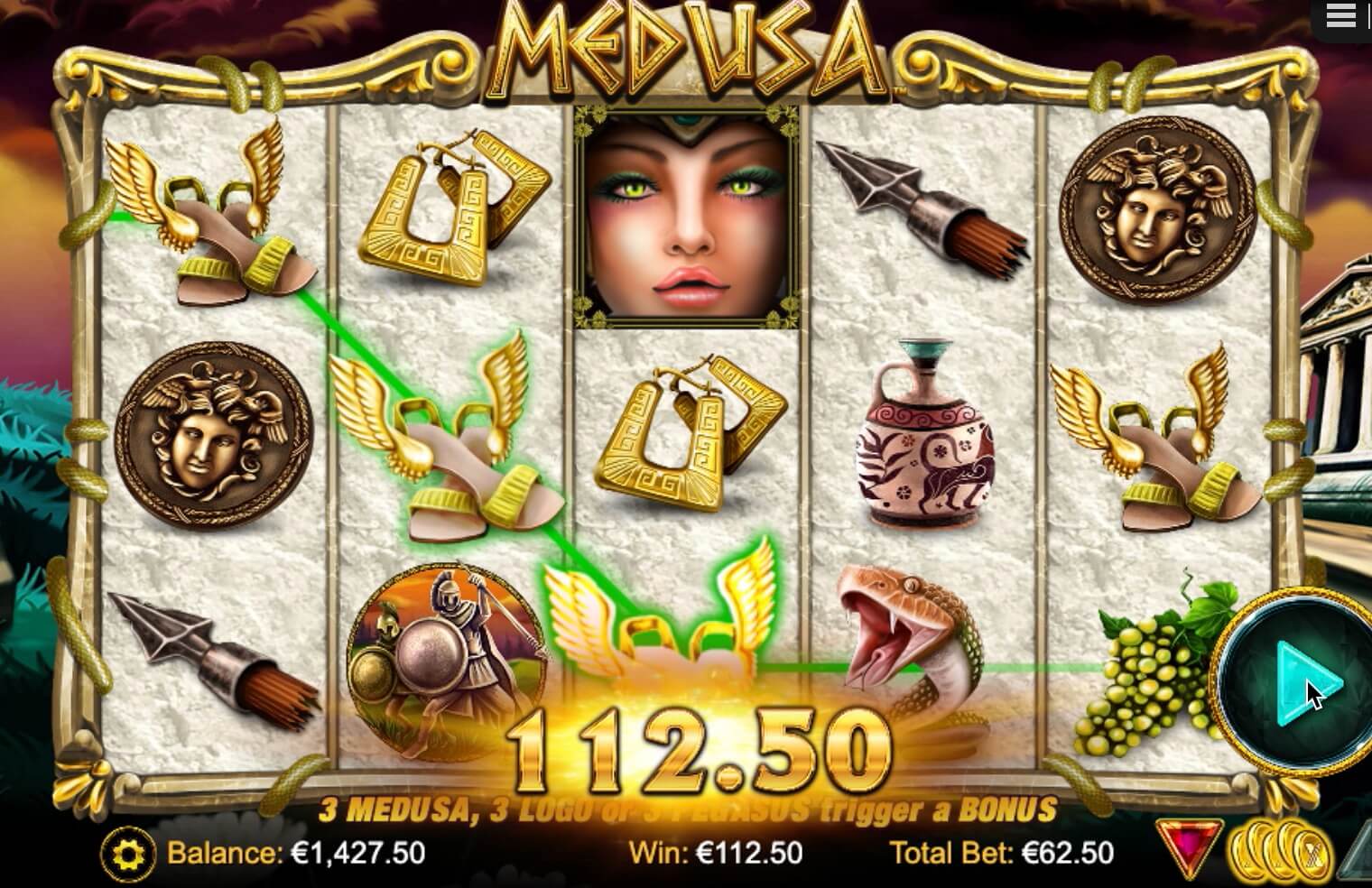 Their payouts are huge, and their minimal combination is two of a kind only. One of them is the tile with Statues of Warriors. For two, you get the line bet doubled, for the five of one kind it will be multiplied 2,000 times. The other one is the tile with a Temple. The minimal combo multiplies the line bet five times, while the five-of-one-kind combination multiplies the line wager 5,000 times.

Well, the regular gameplay is just the regular gameplay. No surprises here. But the slot comes with four bonus tiles. That surely sounds promising. Let’s figure them out. First, there is the Wild. It substitutes missing tiles in any combo. There are only two tiles it can’t replace and both of them are scatters. The Wild is a tile with Medusa herself in all her fantastic beauty and ruthlessness. It appears on the 2nd, 3rd and 4th reels only. 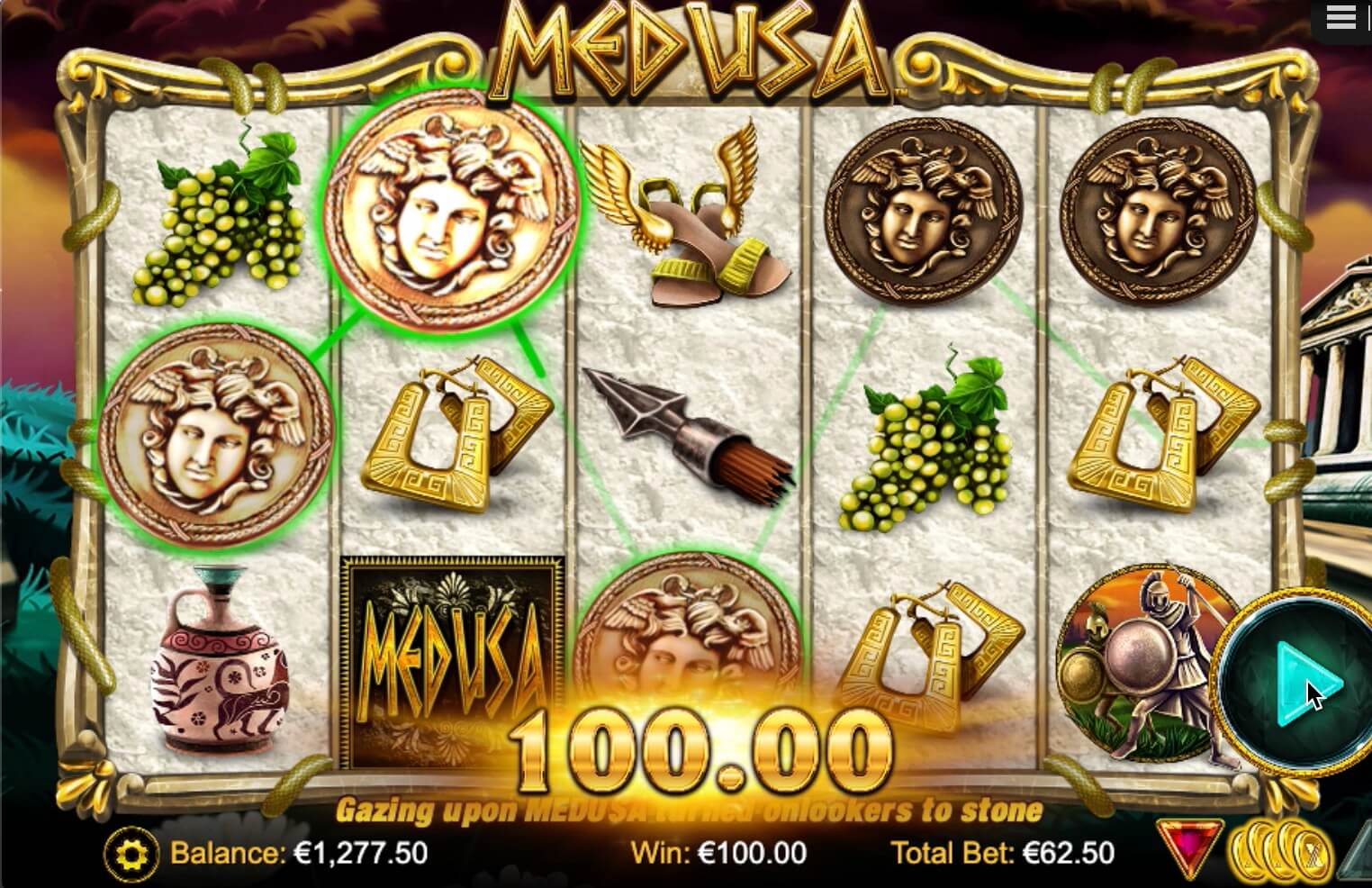 If you hit three Medusa tiles in a spin, the re-spin bonus is triggered. There are three re-spins to enjoy, and they come with an extra: either 2nd or 3rd or 4th reel becomes a staked wild for the entire re-spin session. What’s more, all the re-spin wins get tripled. But you can’t trigger any other bonus game during the re-spins, and you also can’t re-trigger the feature itself.

Speaking of bonus features, there are two more to go. The free spin session is triggered by the Scatter. It’s a tile with the game’s logo and it acts both as a paysymbol, and as a bonus tile. As a regular symbol, it forms paid combos. The minimum is two tiles of one kind and it’s paid 2x the total spin bet. The max combo is worth 250x the total bet. Did we mention those are paid both ways? Well, we just did. Hitting three scatters initiates ten free spins with a doubling multiplier. 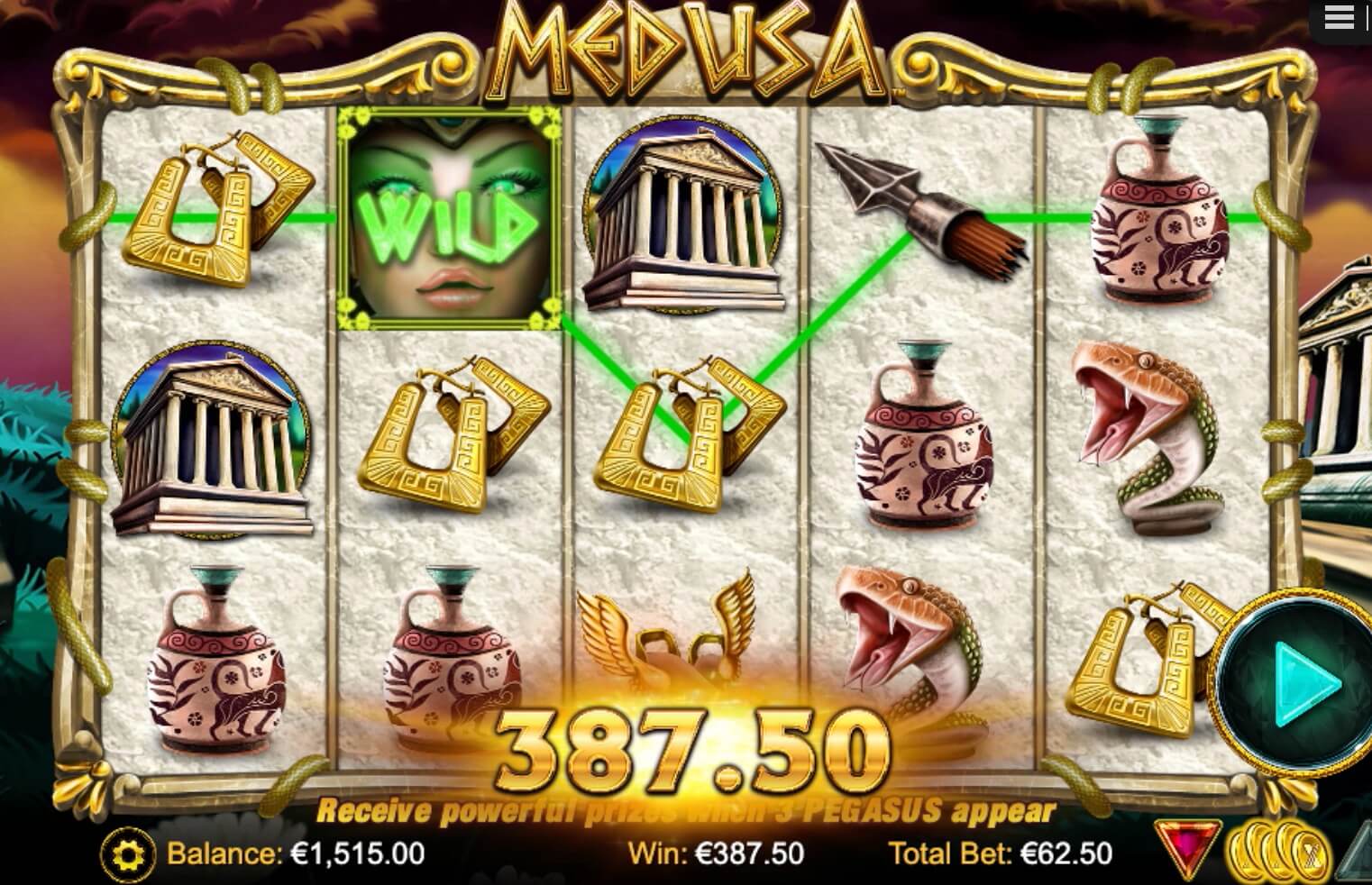 During the free-spin session, an extra tile of a Soldier appears on the middle reel. Whenever it appears, it awards you with up to three super spins. Super spins are played after the regular free games are over. What is so super about them? Well, they come with a 5x multiplier for the wins. Both the free games and the super spins are played at the bet of the triggering spin. They both can be re-triggered.

The last but not the least, Pegasus Bonus is initiated when you hit three Pegasus tiles in a spin. You may initiate the game if you play free games or during the super spins, as well. This bonus is a pick me feature, when you have to pick one out of three Pegasuses to reveal a prize. There may be a cash prize of up to 50 times your triggering spin bet. Other prizes are ‘win all’ and ‘pick again’. Guess both are pretty self-explanatory. 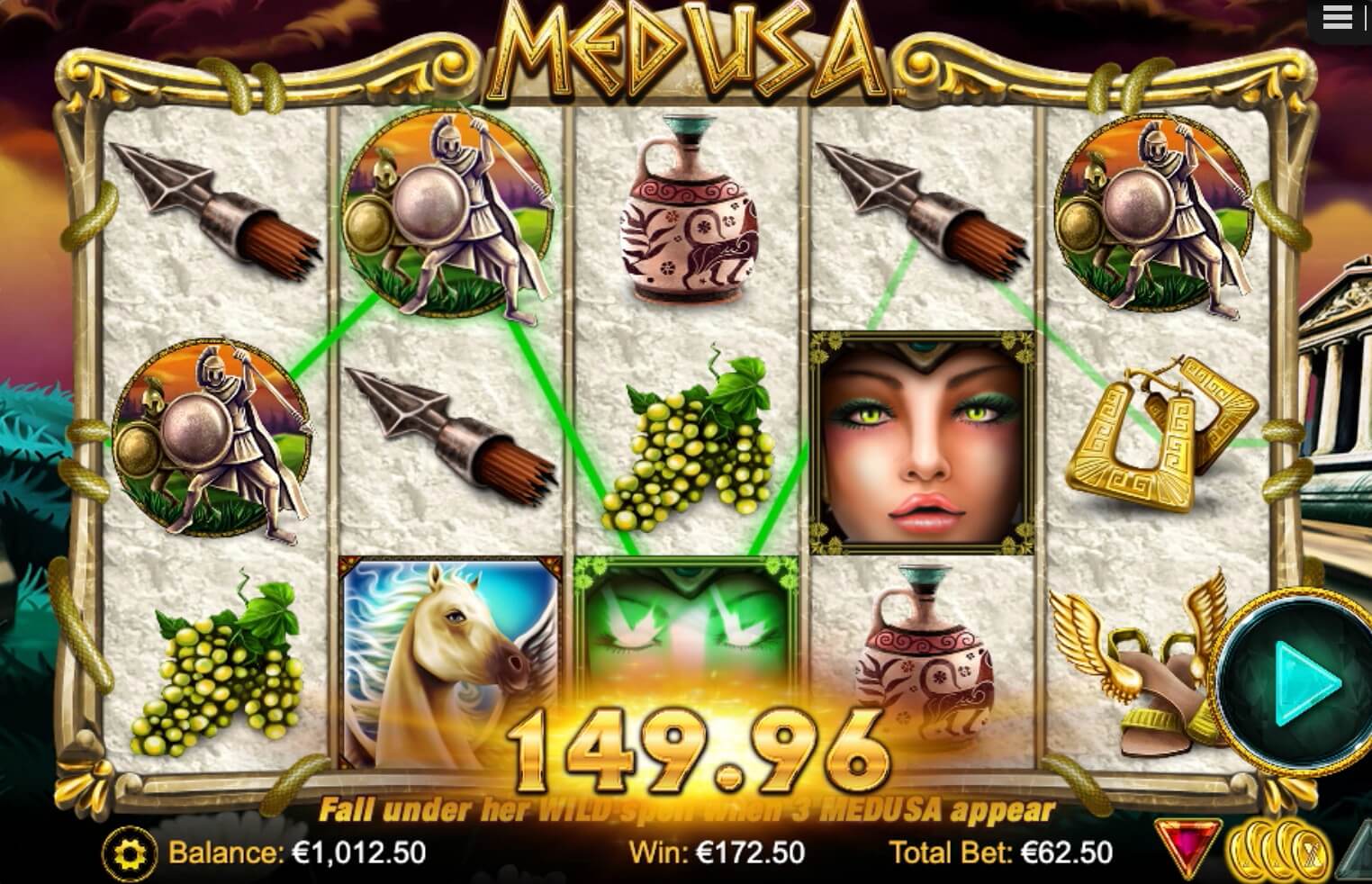 If you trigger the Pegasus bonus during the free games, the multiplier for its wins will be 2x. If triggered during the Super spins, the Pegasus wins will have a 5x multiplier applied to them. The Pegasus tile is hard to miss, it has a huge white, winged horse on it. The tile appears on the middle reels only.

Tired of those identical slots with standard gameplay? Well, we can understand that and it’s entirely up to you. Medusa is classic as heck, so don’t expect anything out of ordinary here. But if you feel like playing a simple game with modest, but regular wins, Medusa would be a perfect choice.