The World Is My Oyster… Or A Lobster?!

Lobstermania was created by the King Show Games and it is nothing like you have ever seen before. Small in-house providers may come up with brilliant ideas. This is how Lobstermania came to life. Its first episode went so well, they decided to make a sequel. And the sequel turned out as good as the original slot. This happens, actually, every now and then.

Lobstermania 2 is a five-reel slot, it has 40 paylines for 60 coins. The paytable, at first, seems pretty ordinary. Yup, there are several low-hand card-borrowed tiles. We all have seen more than enough of those 9s and 10s. Here, you get the 8s, the 9s, the 10s, Jacks, Queens and Kings. Right, no Aces. Instead, you get an 8. Have no idea why that happened! The payouts for five 8s, 9s or 10s is 100 times the coin value.

Queens and Kings are paid 150 times the coin value for 5 tiles. Then, there are high-hand paysymbols. The Boathouse and the Lighthouse tiles are worth 300x one coin for five. The same combination of Boats or Buoys are paid 400x your coin value.

Those were the regular tiles, but gamblers always expect some serious bonus features from any slot. At Lobstermania 2 there are plenty of those. First, let's take the special tiles — the ones with the game’s logo. Those do resemble the wilds of some ordinary slots. The Orange logo icon may replace any tile but the Bonus Picker icon, The Blue Logo may replace any tile but the Orange logo and the Bonus Picker.

Both bonus tiles aka Wilds come with payouts for combos. The Blue Logo combo of five will be worth 1,000, while the Orange Logo tile is worth even more — up to 8,000 for five. 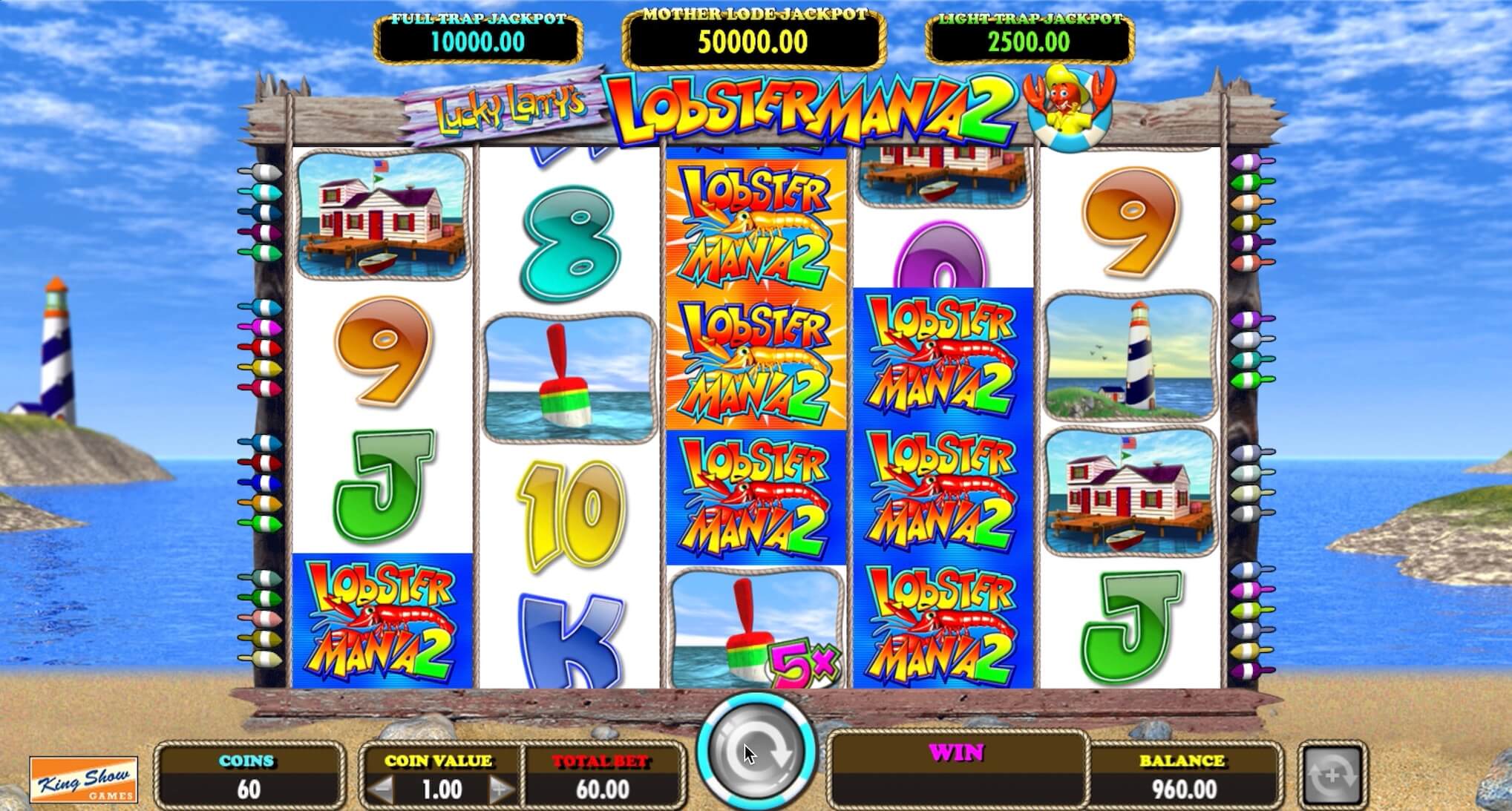 But those two are not the only bonus options of the gameplay. There are more. Actually, much more. First, there is a Jackpot. The Jackpot sign may pop up over any tile but the one with the Lobster, the Bonus Picker. It may happen on any spin. When you land at least three Jackpots on the consecutive reels, it means the tiles will be paid according to the Jackpot payout table.

The payout for three Jackpots is 2,500x coin value. For four Jackpots, you get 10,000x coin value. And for five jackpots your winning will be worth 50,000 times the coin value. Jackpot features can't be activated during the free spin mode.

Another great perk is a 5x or 3x feature. Those are also headers. They appear over some tiles: the 5x appears over the Buoy, the Boathouse, the Boat and the Lighthouse tiles, and the 3x appears over the Buoy, the Lighthouse and on the Boathouse. Both multipliers appear on the middle reel only. If you have a tile with a multiplier header on the winning line, your line win gets multiplied by the value of the header. 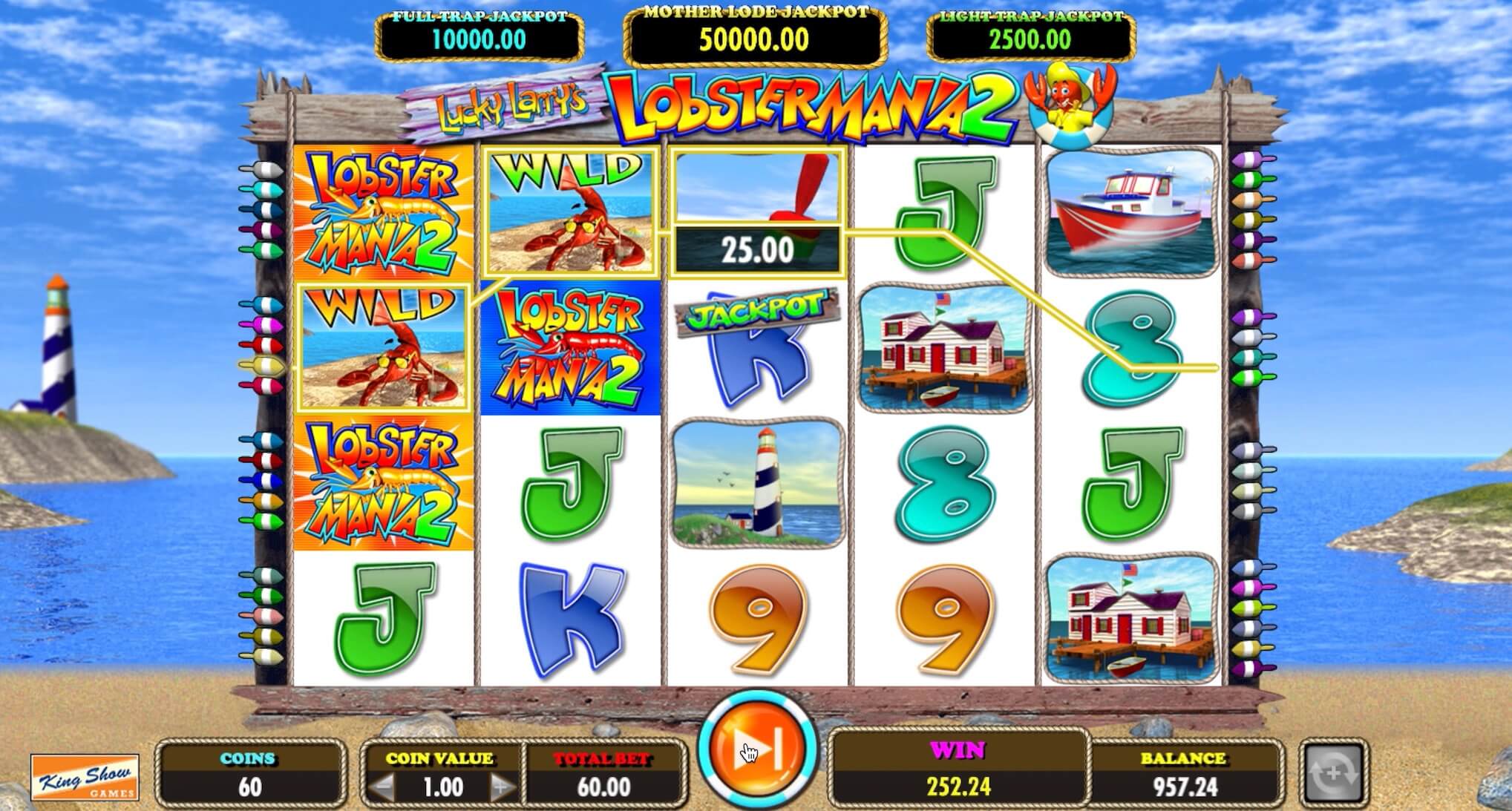 Lobstermania 2 has several bonus rounds. Accordingly, there are two bonus tiles. Both have a lobster and the slot's name on, only the backgrounds are different. One tile has a light-whitish, while the other one has a dark blue. The white tile is called the Bonus Picker. If you hit three of those on one winning line the bonus picker feature will be triggered. Yup, you may pick your perk yourself.

The Bonus Picker icon may appear on the first three reels only. There are two variants of bonus games at Lobstermania: the Buoy and the Free Spin Bonuses. The bonus picker icon has some perks of its own. It comes with a 40x to 95x the coin value multiplier. You get these points just before the bonus of your choice starts.

Let’s figure out the Buoy Bonus round first! Basically, it's a pick-me game, but it’s multilayered, complex as well as much fun! Lobstermania 2 bonus round is all about fishing: first, you have to select a fishing site. You may choose between Brazil, Maine or Australia. Afterward, the fishing starts. You would have between two or four buoys to pick from. Pick a buoy, drag a trap from water to see how many lobsters you have caught.

Traps usually hold two, three or four lobsters. For every lobster, you receive a bonus worth 10x to 575x the coin value. But the best thing is to catch the Golden Lobster, though. 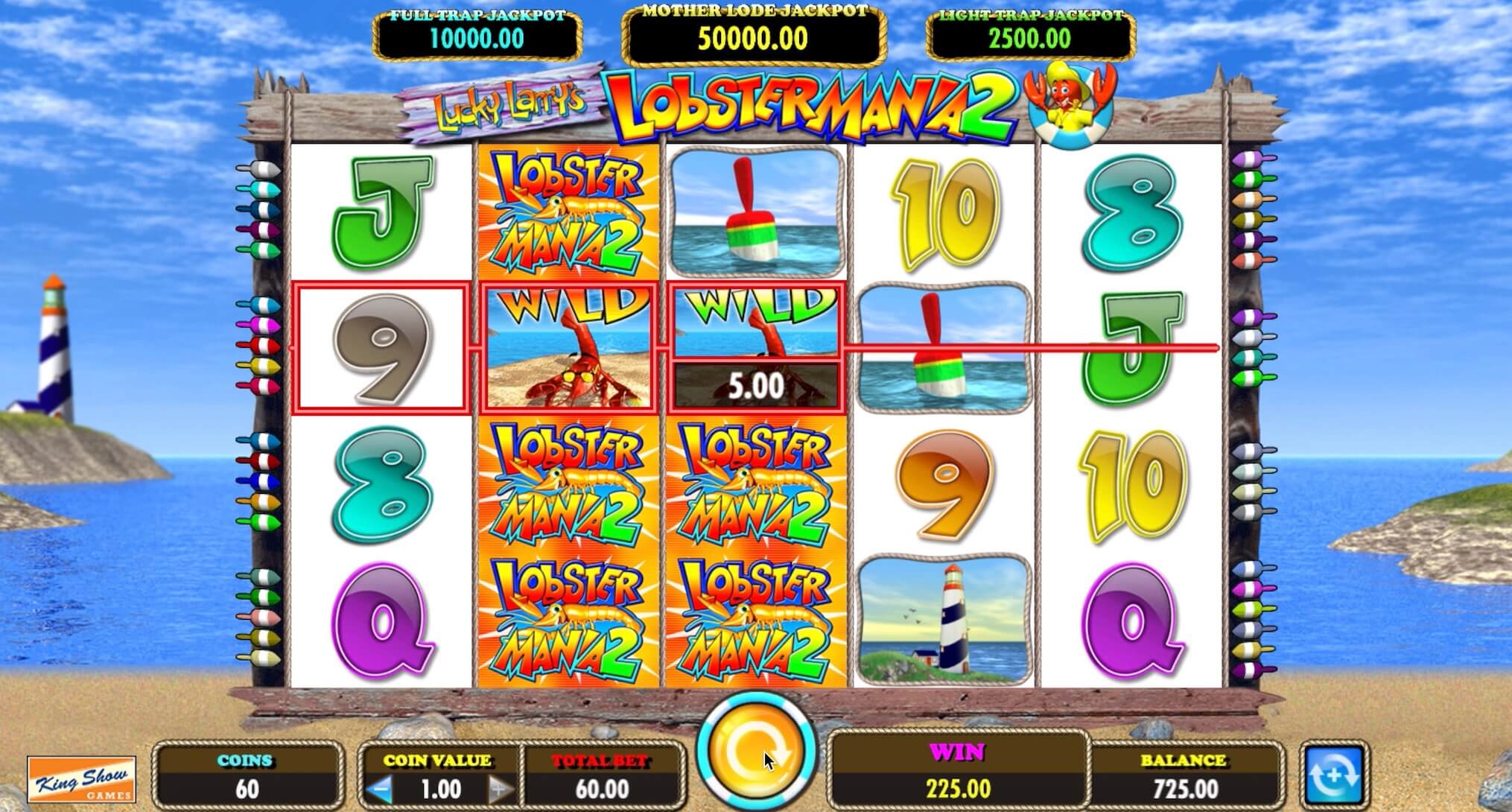 Catching the Golden Lobster means you have reached the second level of the bonus feature. So, what’s next?! Depending on what choice you have made with the country, you will be offered to proceed to the Octopus, the Kangaroo, or the Pelican round next. It’s also all about picking. So if you got the Australian Kangaroo Bonus, then you would pick kangaroos.

The payouts for each are worth 50 — 250 times the coin value. The picking ends when you click on a kangaroo holding a Golden Lobster. Which is paid 200 times the original coin value, by the way!

If you are in Brazil, then you get the Octopus feature and your goal is to pick between several treasure chests. Each of them hides a multiplier worth from 1x to 5x. The game ends when a chest with a Golden Lobster inside gets opened. The payout for the Lobster is worth 200x the coin value, plus it gets multiplied by the multiplier from the last opened chest. 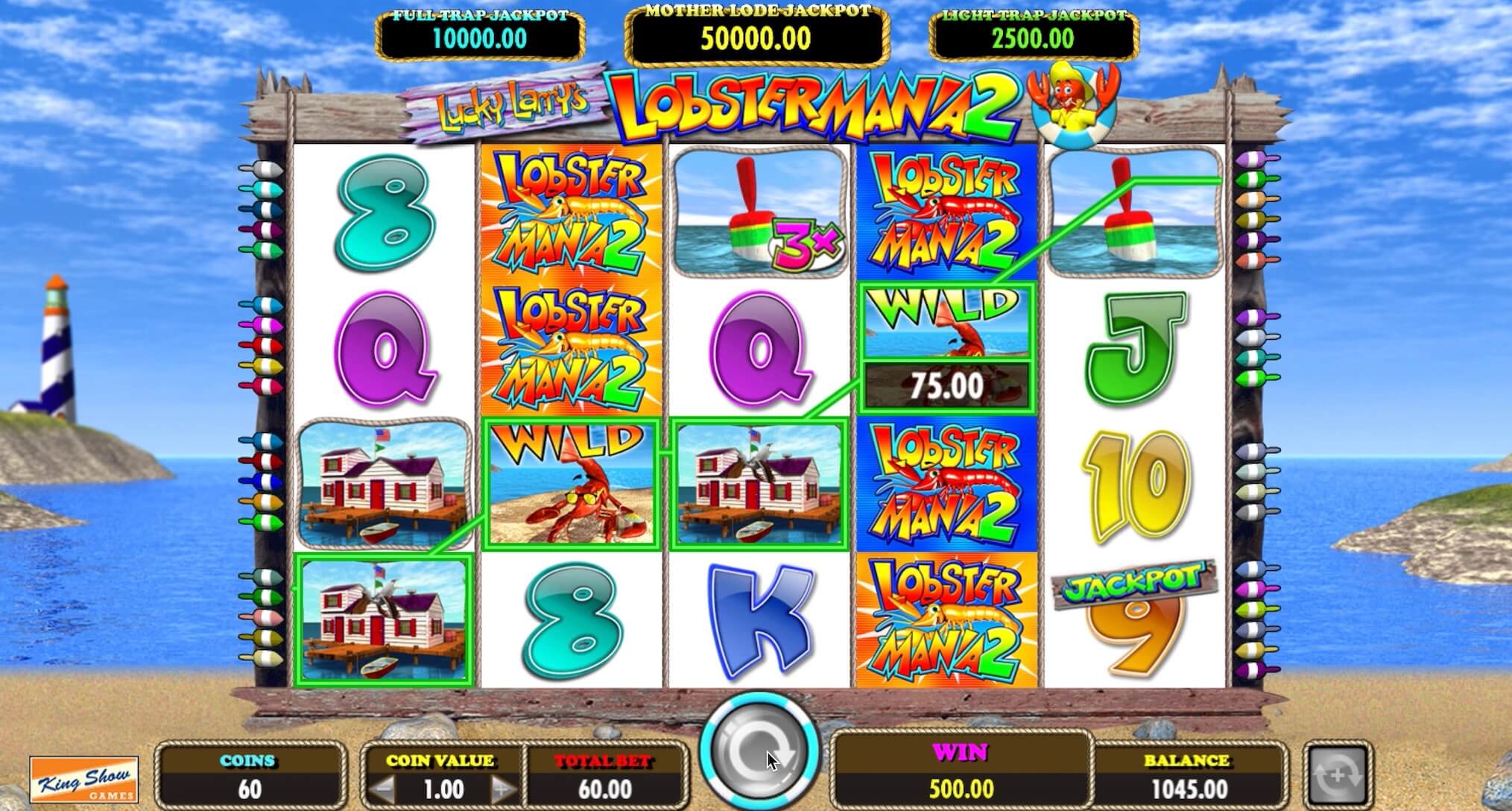 If your location was in Maine, welcome the Pelican round where you will get 160 — 625 times the coin value worth of bonus points for each pelican you pick. When you hit a Pelican without 625x worth points, then you may choose to take the awarded points it has and fold, or you may choose to go on picking. Thus, you will lose the offered award and will have two more chances in picking.

If you pick a pelican with a 625x multiplier, the bonus game ends. It ends either way if you choose three times. When you pick a birdie the third time, the bonus points it hides are added onto your account automatically.

But the perks are far from being over. There is more to come, check out the Free Spin Bonus. The Free Games mode has a peculiar design, different from the regular game mode. The tiles stay the same, they have the same value, but their background turns deep blue. Speaking of changes, Free Games have no Jackpot or multiplier headers’ perks. To activate Free Spins, land a bonus tile on one of the winning lines.

The bonus icon features a lobster and it is signed Lobstermania. It's basically identical to the one for the bonus game activation but has a navy blue background. Usually, one tile comes with standard five free spins. But you may trigger the feature several times, getting 240 free games tops in one round. 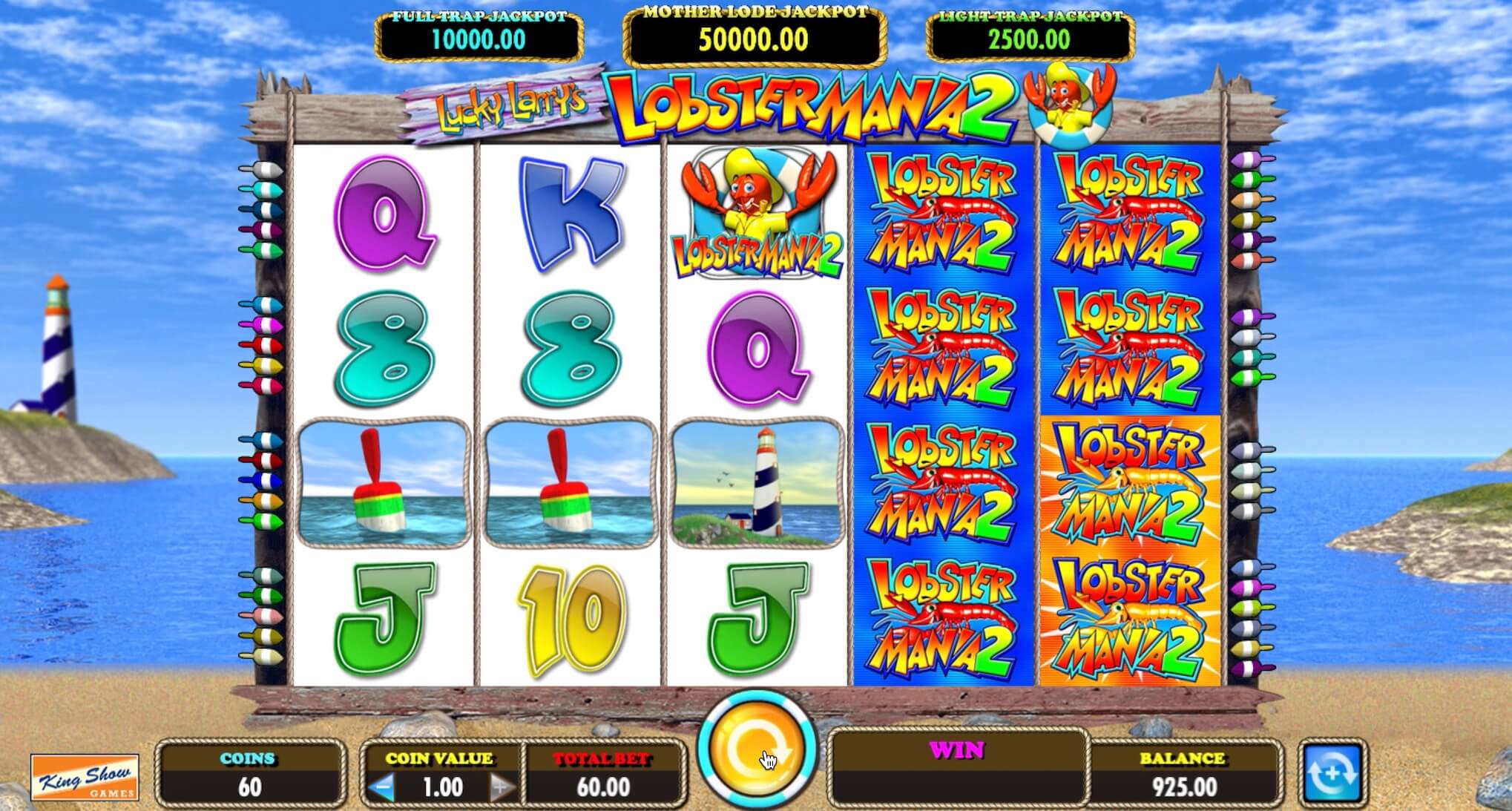 Finally, just a few words about Lobstermania 2 interface and gameplay. Though the interface is a bit unusual, it’s intuitive. Betting might seem a bit odd at the beginning, but in reality, it is basic. Remember, you can’t choose the number of lines — they are fixed, as well as you can’t choose the number of coins per those lines — they are also fixed. What you can change is the coin value. Choose from 1.00 to 100.00. Thus, your stake may vary from 60.00 to 6,000.00 per spin. Highrollers would be totally happy with these numbers.

So, if Lobstermania 2 is worth your time? It was certainly worth ours. It is highly unusual. Here, you get a mixture of all possible bonus features. It takes quite a while to figure out how all of them work together, but it is certainly worth it. There is a huge variety of bonus rounds, multipliers and free spins. Pretty much everything one gambler can wish for in one single slot! Just keep in mind that Lobstermania 2 is a highly volatile slot, so don’t expect many small wins, here the wins are less frequent but more chunky!

Legend of the Buffalo